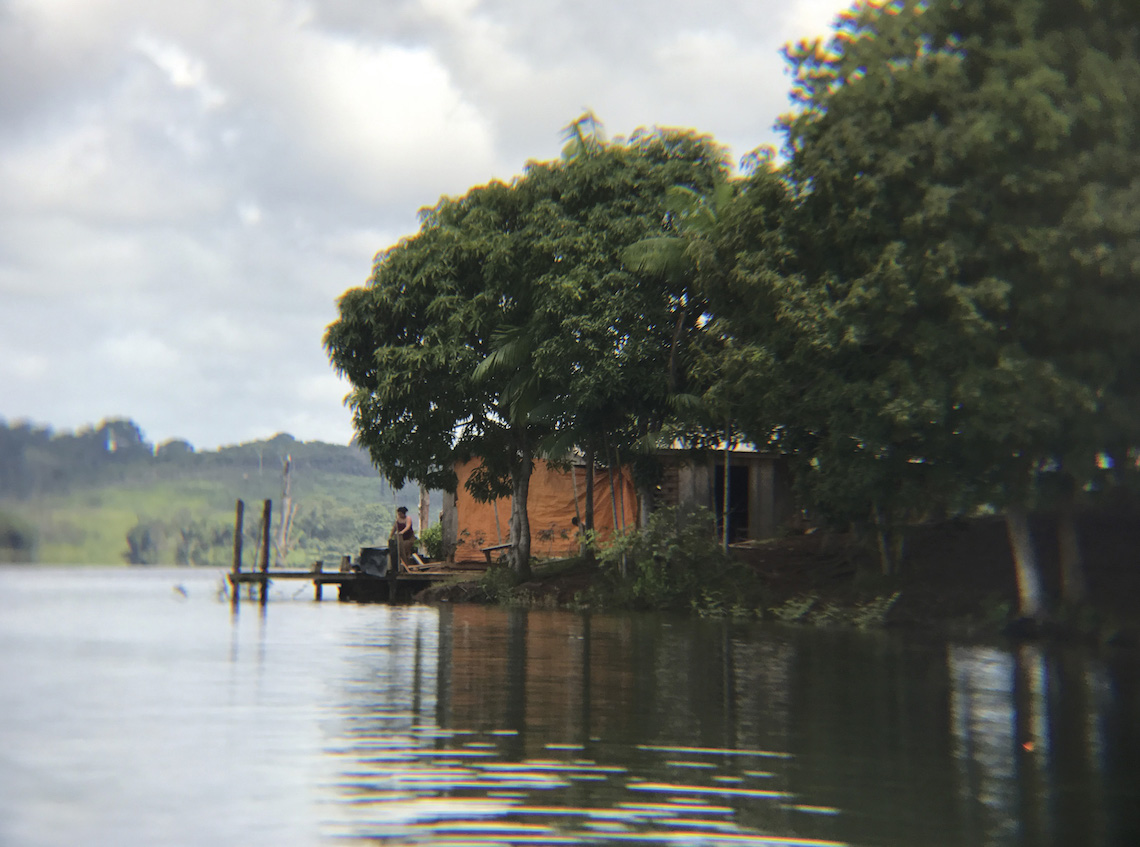 River-dwellers in houses built on stilts on the banks of Lake Tucuruí in the state of Pará: excessive exposure to mercury

River-dwelling and indigenous communities residing in areas close to hydroelectric plants in the Amazon may be exposed to high levels of mercury. This suspicion comes from a group of Brazilian and Spanish researchers coordinated by the biochemist María Elena López of the Institute of Biological Sciences at the Federal University of Pará (UFPA). The team analyzed hair strand samples taken from 37 people living on islands located in Lake Tucuruí of the Caraipé region of Pará surrounding the Tucuruí hydroelectric plant, the second largest in Brazil. They found that over half of the residents had levels of contamination of up to seven times higher than the limit of 10 micrograms of mercury per gram of hair set by the World Health Organization (WHO).

“More than 80% of the metal identified was in its organic form, the so-called methylmercury,” stated López. This is the most toxic form of mercury, which is able to circumvent the body’s defenses and reach the brain. In these cases, it may cause a severe neurodegenerative syndrome known as Minamata disease, characterized by tremors, coordination problems, sensory disturbances, vision and hearing impairment, and in extreme cases, death. Although they had high levels of methylmercury in their bodies, none of the river-dwellers were diagnosed with any health problems, which was not surprising to the researchers; clinical signs associated with contamination by this metal take years to appear.

In their paper, published in January in the journal Ecotoxicology and Environmental Safety, the researchers argue that the Tucuruí residents are being contaminated by the fish they eat. They first suspected that the poisoning was the result of gold mining because cases of mercury contamination in the Amazon are almost always associated with gold extraction. Miners typically pour liquid mercury into a mixture of sand and gravel extracted from rivers to attract the precious metal. This practice releases large quantities of mercury into the environment. 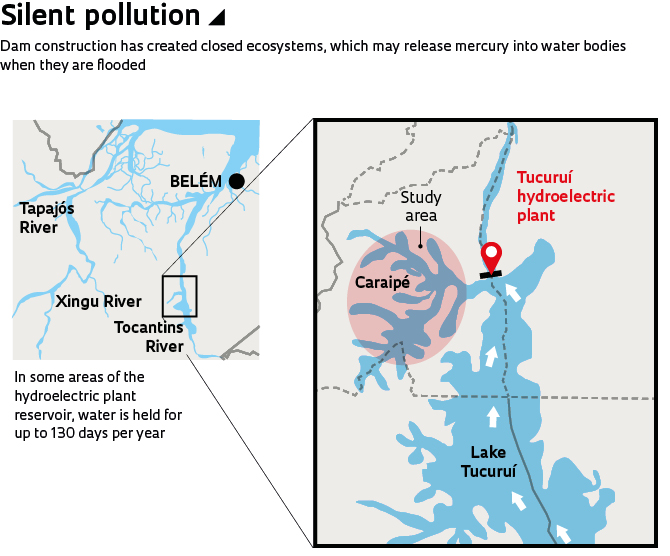 When they analyzed the history of the region, the researchers found multiple mining ventures, but none extracting gold. They then suggested that the main source of mercury contamination could be indirectly traced to the operation of the Tucuruí hydroelectric plant, which was built between 1974 and 1985.

Dam effects
López explains that the construction of the dam created closed ecosystems that flood periodically. “In some areas of the reservoir, the water is retained up to 130 days per year,” she says. As a result, every year during the rainy season, when the river overflows and invades the forest, water rich in decomposing organic matter mixes with large volumes of young organic matter. Over time, sunlight causes these compounds to produce hydrogen peroxide, which helps release the inorganic mercury stored in the soil. Anaerobic bacteria then convert the substance into methylmercury, which enters the aquatic food chain.

The possibility that this dynamic would become a problem in the region was raised almost 20 years ago by the American biologist Philip Fearnside, who today works for the National Institute for Amazonian Research (INPA), in articles published in the journal Environmental Management. In August of last year, a study published in PLOS ONE also highlighted risks of methylmercury contamination resulting from dam construction in the Amazon.

“The Amazonian soil is naturally rich in mercury, in its less aggressive inorganic form,” says López. In some regions, the characteristics of the soil and water lead to high concentrations of this metal. This is the case for the Rio Negro basin, where each kilogram of soil contains an average of 172 micrograms of mercury, almost four times higher than levels considered normal for soils in other regions (see Pesquisa FAPESP, issue no. 143). “The problem is that any environmental changes may cause inorganic mercury to be released and converted into methylmercury,” adds López.

When released into the environment, the metal is absorbed by algae; small fish eat the algae and in turn are eaten by larger fish. “The fish that are at the top of the food chain have a greater risk of accumulating mercury by feeding on smaller contaminated organisms,” explains López. This is the case for peacock bass (Cichla sp.), a species that is one of the most commonly consumed in the region and widely sold in Belém. “The samples of peacock bass we evaluated showed mercury levels similar to those found in fish in the Tapajós River basin, which is the largest area of active gold mining sites in Brazil.” A 1995 study published in the journal Science of the Total Environment had already identified the presence of methylmercury in another fish species from the region where the Tucuruí hydroelectric plant is located, the South American silver croaker (Plagioscion squamosissimus).

Eletrobras Eletronorte, which administers the Tucuruí plant, recognizes the complexity and importance of this issue. In a note the company says that it “promotes and supports studies that contribute to a better understanding of the origins of mercury in natural and anthropized [human-altered] environments in the Amazon region, as well as the biological, geological, and chemical mechanisms that contribute to their mobilization, accumulation, and transfer between different environmental compartments.” The company also notes that it is currently conducting a study on the role of microorganisms in mobilizing and accumulating mercury in the plant reservoir in partnership with the UFPA.

Mercury contamination is also occurring in other parts of the Amazon such as in indigenous tribes in the state of Roraima, in Northern Brazil. In 2016, researchers from the Brazilian School of Public Health at the Oswaldo Cruz Foundation (FIOCRUZ) analyzed hair samples from 239 Yanomami and Ye’kuana Indians from 19 villages and found that in some areas up to 92% of indigenous peoples had mercury contamination. In this case, however, the metal was released into the environment through mining activity. “Children and women of reproductive age were the most affected,” explained Paulo Cesar Basta, a physician and coordinator of the FIOCRUZ study.

Basta believes that it is important to establish an environmental monitoring plan to identify possible sources of mercury exposure in the Amazon, which seem to stem from gold prospecting. More than 400 hydroelectric power plants are operating or under construction in the region, especially in the Tapajós River basin. “Another strategy would be to conduct a more profound analysis of water bodies in the region and assemble a map of contamination risk that could be used to guide the local population,” he suggests. “We are talking about poor and isolated
communities that depend on fishing to survive,” says María Elena López. “Many don’t even know they are contaminating themselves,” stated the biochemist of the UFPA.