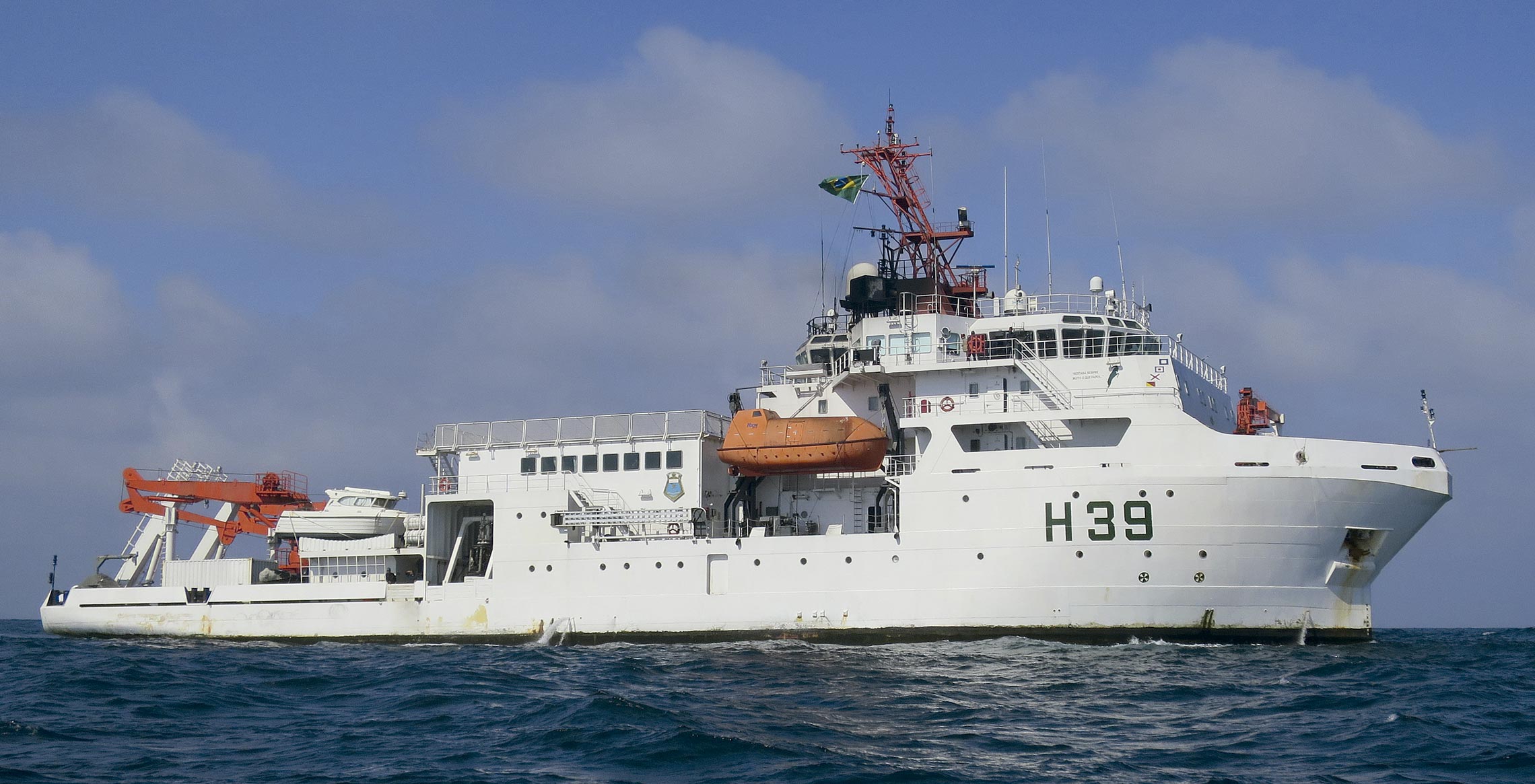 An agreement signed last August will support the continued operation of the Vital de Oliveira, a hydrographic survey ship put into service in 2015. The agreement, signed in Rio de Janeiro, provides three years’ worth of funding for the operation and maintenance of the Brazilian Navy vessel. The ship was purchased for R$174 million by the federal government with cofunding from mining company Vale and state-owned oil company Petrobras to support research on climate, sea currents, sediments, and biodiversity in oceanic areas of the Tropical Atlantic. Total investment under the agreement is approximately R$75 million. The Brazilian Ministry of Science, Technology, Innovation, and Communications (MCTIC), the Navy, and Petrobras will each contribute R$18.7 million. Vale has pledged R$1.45 million and the Companhia de Pesquisa de Recursos Minerais (CPRM – Mineral Resource Research Company), a public company linked to the Ministry of Mining and Energy, will allocate R$17.2 million over the same period. “The Vital de Oliveira, as the vessel is called, was previously operated with funding from the Navy’s budget and one-off contributions from participating institutions,” says Edmar Rodrigues Alves, a frigate captain and head of the operations section of the Navy’s Hydrographic and Oceanographic Research Vessel Group.

The agreement also establishes the vessel’s rules of procedure, including managing and technical-scientific committees responsible for, among other things, defining what scientific missions and priority projects can use the Vital de Oliveira’s infrastructure. Rules will be created to formalize project selection. “Research proposals are currently selected informally by partners such as Petrobras and MCTIC. This will now be tasked to the technical-scientific committee,” explains Alves. There is currently a latent demand, he says, for data about Amazônia Azul (the “Blue Amazon”), an area of ​​4.5 million square kilometers (km2) spanning Brazil’s exclusive economic zone and continental shelf. The wealth of natural and mineral resources in this area of the Atlantic Ocean, including pre-salt oil fields, has attracted companies such as Petrobras’s and Vale’s interest in using the vessel.

With its 78-meter length and gross tonnage of more than 4,000 tons, the Vital de Oliveira has the capacity to accommodate 40 researchers and 90 crew on voyages lasting more than 15 days. It has five laboratories and 28 pieces of scientific equipment used in environmental, geological, and physico-chemical monitoring and data acquisition in oceanic areas. Built by a Norwegian shipbuilding company at a shipyard in China, the vessel has been employed by Petrobras for environmental research, geological surveying of the seabed, and investigations in the field of ​​stratigraphy—the study of rock layers. One of the equipment units used by the company’s researchers is a remotely operated vehicle capable of operating at a depth of up to 4,000 meters. “The Vital de Oliveira is equipped with unique scientific infrastructure, including modern laboratories and state-of-the-art equipment for data collection and analysis. The ship will help to increase Brazil’s presence in the South and Equatorial Atlantic, and will provide future generations of Brazilians with the opportunity to derive benefits from developing the natural resources in this region of the ocean,” Petrobras said in a statement to Pesquisa FAPESP. 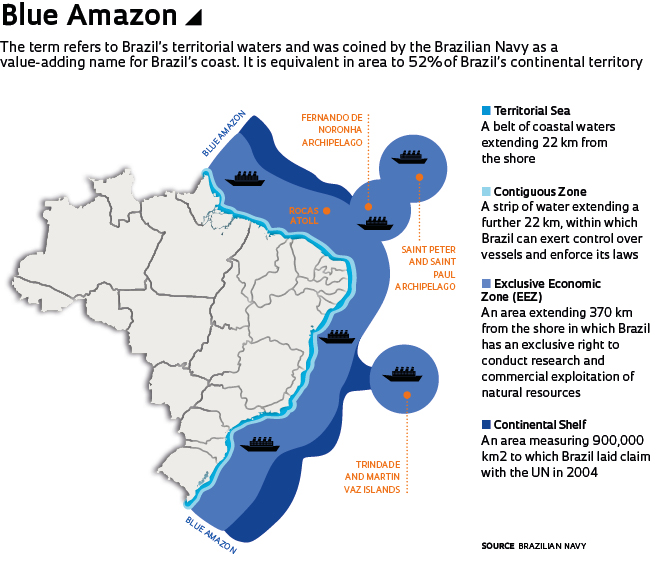 Research programs
The ship is also used for purposes other than those of the parties to the funding agreement. In November 2015, just over two weeks after the failure of Samarco’s tailings dam in Mariana (MG), the federal government had the Navy move the vessel to the coast of Espírito Santo to collect data on the water column and seabed at the mouth of the Doce River and assess the damages caused by the mine tailings. “The Vital de Oliveira is manned by military personnel who are trained and qualified to collect data and operate the ship and its scientific equipment,” says Alves. The vessel is also deployed on missions to support research programs in fields such as climate variability and climate change. One such program is Prediction and Research Moored Array in the Atlantic, or PIRATA. Created under an agreement concluded in 1997 between research institutions in Brazil (INPE-DHN), the US (NOAA), and France (IRD-MeteoFrance), the initiative investigates interactions between the ocean and the atmosphere over the Tropical Atlantic in an area between the Americas and Africa, bounded by latitude 20° South (roughly at Vitória, Espírito Santo) and latitude 20° North, in the Caribbean. This area is monitored by eighteen sensor-equipped buoys functioning as small oceanographic stations on the high seas. They measure wind speed, rainfall, relative humidity, solar radiation, atmospheric pressure, air and water temperature, salinity, currents, and marine carbon dioxide (CO2) concentration.

Since the first buoy was deployed more than 20 years ago, the notion that ocean health is linked to climate change has become more evident in the literature, says meteorologist Paulo Nobre of the National Institute for Space Research (INPE) and chairman of the PIRATA National Committee. “For example, increasing CO2 concentrations in the atmosphere accelerate ocean acidification, threatening species living deep in the ocean,” he explains. In two decades, the program has published more than 300 articles in scientific journals and produced thousands of oceanographic datasets.

The vessel is equipped with a remotely operated vehicleBrazilian Navy

Before the Vital de Oliveira was commissioned, PIRATA researchers worked aboard two other Navy vessels—the oceanographic research vessel Antares and the buoy tender Amorim do Valle—purchased in the 1980s and 1990s. “Aboard the Antares there was room for only seven researchers. The Vital de Oliveira, with its capacity to accommodate dozens of researchers, provides a fertile environment for interaction among scientists in different fields,” Nobre says. The PIRATA program team boarded the Vital de Oliveira in 2017 with 10 active projects involving 68 researchers and students from Brazilian scientific institutions. One of the projects this year is investigating the accumulation of microplastics in the South Atlantic—fragments less than 5 millimeters (mm) in size and usually invisible to the naked eye when floating in the ocean or mixed in the sand. According to Nobre, one of the pieces of equipment aboard the Vital de Oliveira that is most often used in the PIRATA research program is the CTD Rosette, a package of sensors that measure important physico-chemical parameters of seawater including temperature, salinity, hydrostatic pressure, and dissolved oxygen. The sensors are lowered to depths of up to 5,000 meters and take readings along their descent and subsequent ascent to the surface.

This equipment has been useful to researchers who boarded the vessel earlier this year to study the Rio Grande Rise, an ocean ridge about 1,300 kilometers off the coast of Rio Grande do Sul. The project is being conducted under an agreement between CPRM and the International Seabed Authority (ISA), a United Nations (UN) agency, which granted Brazil the right to investigate the mineral potential of the area over a period of 15 years. “The project includes environmental and oceanographic research to assess whether mineral extraction in the region is feasible,” says oceanographer José Angel Alvarez Perez, a researcher at Universidade do Vale do Itajaí (UNIVALI), in Santa Catarina.

The vessel is equipped with a CTD Rosette, which measures physico-chemical parameters in seawaterBrazilian Navy

Founded in the 1970s to generate and disseminate geological knowledge and to inform government policy, CPRM has been exploring the Rio Grande Rise since 2009 through expeditions in collaboration with research institutions to identify areas of greatest economic interest for mineral exploration. Research to date has revealed the area is rich in cobalt, nickel, manganese, and even rare-earth elements used in the high-tech industry.