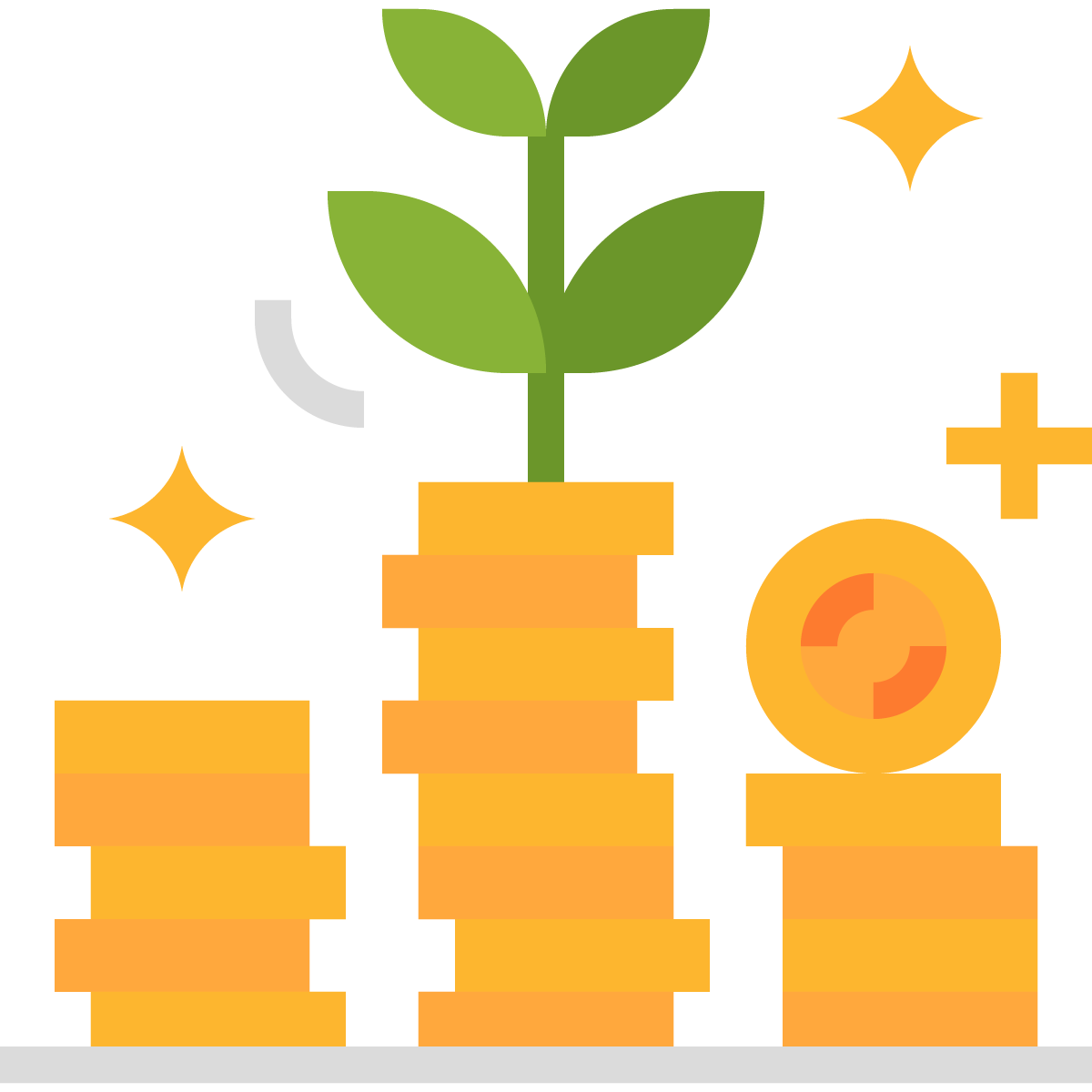 A study of the effects of human-capital investment on agriculture in the state of São Paulo has found that every R$1 applied toward research and development (R&D), higher education, and rural extension has generated a return of R$12 to São Paulo’s economy through improved productivity. The study, led by researchers from the University of São Paulo (USP), focused on the contributions made by institutions that fund, produce, or disseminate knowledge of interest to agriculture. FAPESP funding for grants, research, and infrastructure in the fields of crop science and agriculture, for example, has yielded returns of R$27 for every R$1 invested, a figure surpassed only by public universities training skilled professionals for agriculture, which return R$30 for every R$1 spent.

The data from the study were published in the recently released book Contribuição da FAPESP ao desenvolvimento da agricultura no estado de São Paulo (FAPESP’s contribution to the development of agriculture in the state of São Paulo), which presents the findings from research conducted between 2013 and 2018. “Agribusiness is the one industry keeping Brazil’s economy afloat amid the crisis. This has been the result of long-term research investment and public policies that have been upheld with relative consistency by public agencies in São Paulo over the last 60 years,” says economist Alexandre Chibebe Nicolella, a researcher at USP’s Ribeirão Preto School of Economics, Administration, and Accounting (FEARP), who led the research alongside crop scientist and economist Paulo Cidade de Araújo from USP’s Luiz de Queiroz College of Agriculture (ESALQ-USP), who passed away in 2016 at the age of 84. Funding from state agricultural research institutes such as the Agronomy Institute, in Campinas (IAC) and the Food Technology Institute (ITAL), and from the São Paulo chapters of the Brazilian Agricultural Research Corporation (EMBRAPA), have provided returns of R$20 for every real invested. Investments in rural extension—providing technical assistance and information to farmers—have delivered per-real returns of R$11.

São Paulo’s agribusiness market was worth R$267.9 billion in 2017, or 13.5% of the state’s Gross Domestic Product (GDP). Recent years have seen a marked expansion of the sugar and ethanol industry in the state—in 2013, sugarcane plantations occupied 23% of its 24 million hectares (ha) of cropland, compared with 12% ten years prior. Crop yields grew from 80,000 to 90,000 kilograms per ha during the first decade of the century. São Paulo also produces 72% of Brazil’s supply of citrus. Orange juice, however, accounts for only approximately 3% of São Paulo’s agribusiness GDP, notes crop scientist and economist Geraldo Sant’Ana de Camargo Barros, a professor at ESALQ-USP and coauthor of the study. “The citrus industry adds very little value to the raw material. It processes R$1.66 billion worth of orange crop into R$1.97 billion worth of orange juice, or an added value of 18.7%. The sugar and ethanol industry turns R$4.8 billion worth of sugarcane into R$13.6 billion of sugar and ethanol, almost tripling the value of the raw material,” says Barros, according to Agência FAPESP.

Agriculture in São Paulo is highly diversified. The southeastern state produces 25% of Brazil’s timber and pulp, 17% of the country’s poultry, and 9% of its coffee. São Paulo is a nationally leading producer of 16 of its 25 major crops. Crop yields are high. “With just 11.7% of Brazil’s total cropland, São Paulo produced 18% of the country’s total crop value during the three-year period of 2010 to 2012,” wrote Maria Auxiliadora de Carvalho, a retired researcher at the Institute of Agricultural Economics, in a chapter of a book describing the recent history of agriculture in São Paulo. 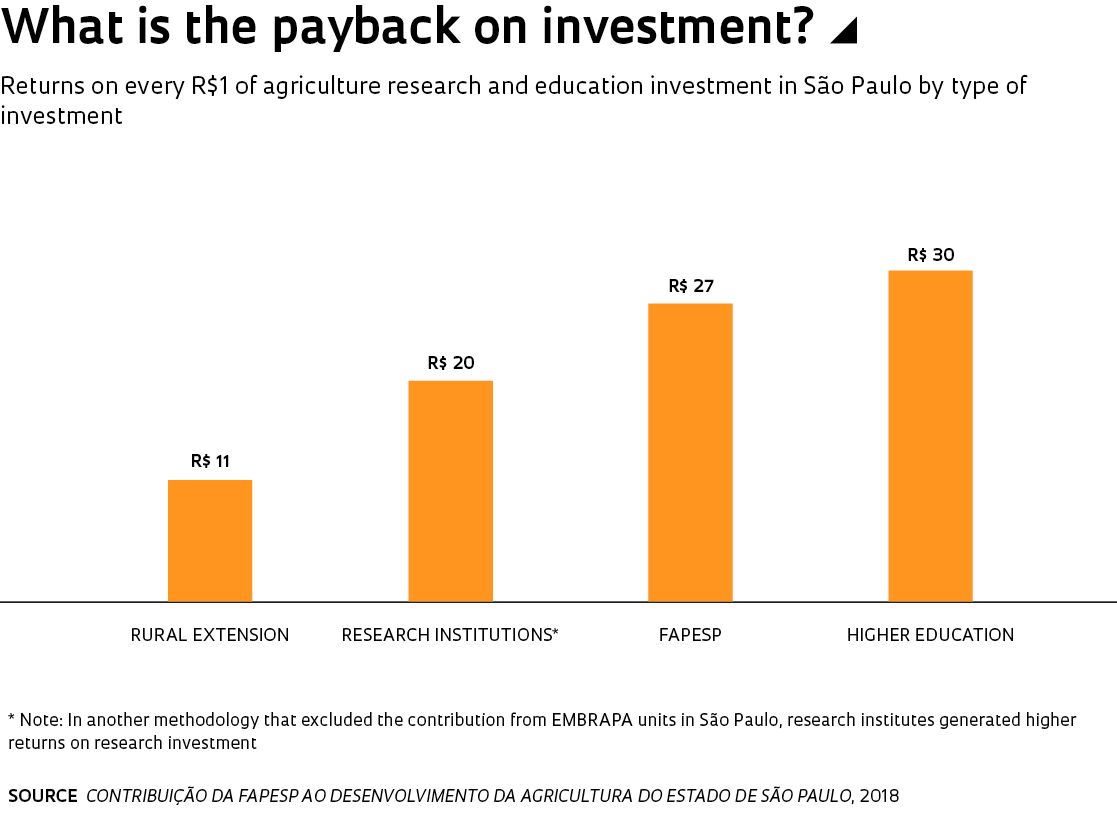 Although the study measured the impact of different institutions individually, their activities are mutually reinforcing. “We have world-class universities—such as ESALQ-USP, which is consistently rated one of the world’s top universities in its field in different rankings—and important research institutions. Much of their past and present performance is thanks to funding institutions such as FAPESP,” explains Alexandre Nicolella. “We have high-quality education, research, and extension programs, and all require funding.”

The study was based on Total Factor Productivity (TFP), a widely accepted method of measuring the impact of technological development and the influence of R&D investment on output growth. The methodology was originally developed in 1958 by economist Zvi Griliches, then a researcher at the University of Chicago, who became a leading authority on the economics of technological change and empirical studies on the diffusion of innovation and returns on R&D investment. Griliches pioneered the measurement of rates of return on innovation in the development of hybrid corn in the US and estimated that every dollar invested in research yielded US$8 in return. In 1972, a paper published by researchers from the University of Arizona and Purdue University used this methodology for the first time in Brazil to determine the rates of return on R&D investment in cotton-crop improvement, such as investment by IAC in developing new cultivars.

The project led by Nicolella looked at agricultural output and expenditure on inputs in São Paulo from 1970 to 2014 to identify factors that enabled farmers to produce more with fewer resources. Because the effects of investments are not felt in the same year in which they are made, the researchers used different econometric models with different time lags. In one of the models, with an investment-to-impact lag estimated at three years, a 10% increase in spending on human capital, research, education, and rural extension led to an increase of 4.8% in TFP, with each R$1 invested generating a return of R$12. In the second model, a variable lag was used—one year for FAPESP investment and rural extension, two years for research, and four years for higher education—and, as previously noted, a return of R$27 was generated for every R$1 in FAPESP funding. In a third model, EMBRAPA was excluded from the calculation to measure the impact from state research institutes alone. This calculation yielded a return of R$11 for every R$1 invested in rural extension, R$23 for FAPESP funding, R$29 for research institutes and R$35 for higher education. “Whatever the model, the results are always positive and substantial. The rate of return is higher than for the vast majority of investments, showing that the relevant public policies have paid off,” says Nicolella. “Money invested in training human resources and generating knowledge has resulted in increased productivity, more abundant food supply and, ultimately, lower food prices.” 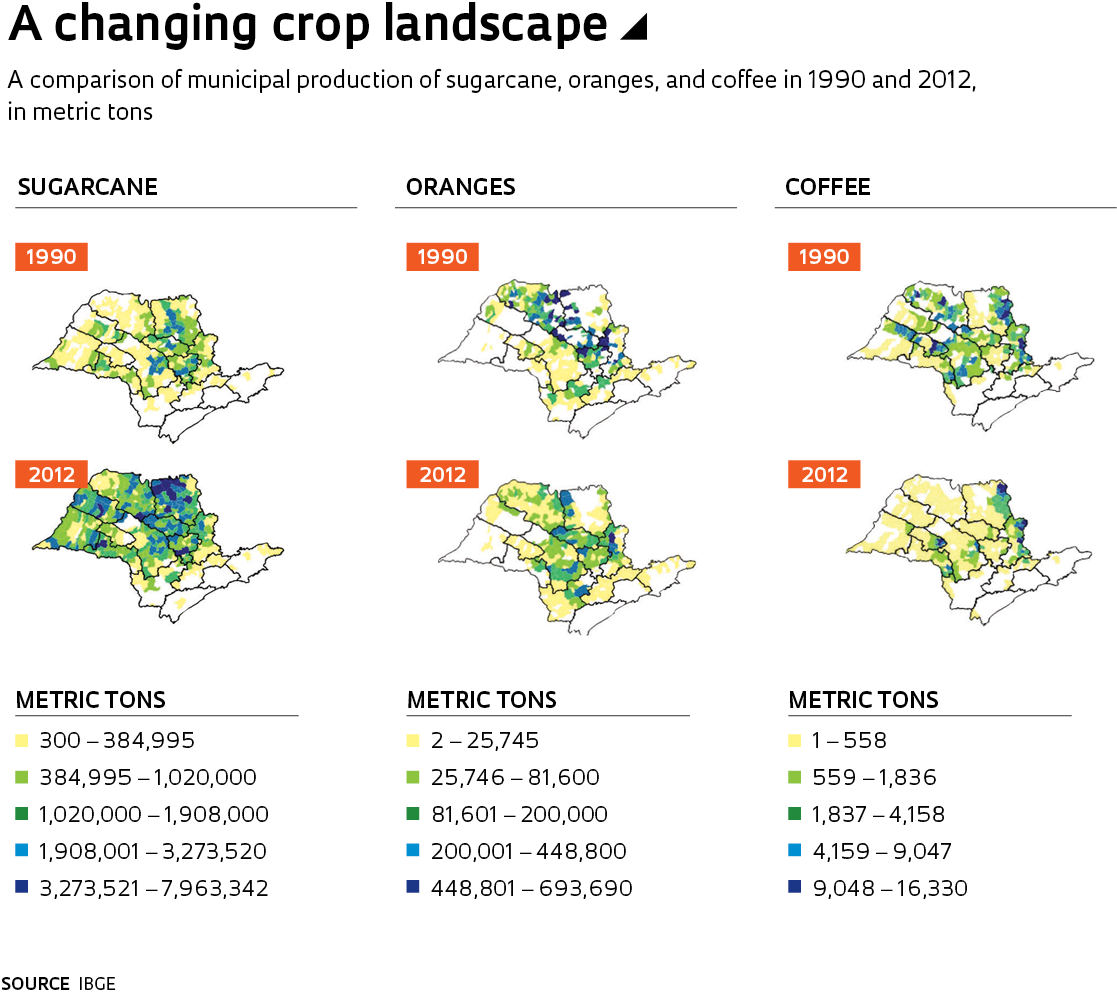 A problem in this type of analysis, according to Nicolella, is that it is unable to factor in the important impacts of private investment due to a lack of available data or the incorporation of technologies from other sources. It is also difficult to measure indirect effects from funding. “We are unable to measure the overflow effects from each investment: for example, the extent to which money invested in building a laboratory at a university has produced diluted impact over time. The calculation gets fuzzy,” he says. FAPESP funding for agriculture projects in São Paulo totaled R$3.4 billion between 1981 and 2013. In the early 1980s, agriculture absorbed 5% of FAPESP investment; in 2013, that figure had reached 20%. Out of total funding, 41.3% has gone to regular research grants, 37.2% to other grants, 11.3% to special programs, such as Bioenergy Research (BIOEN), and 10.2% to R&D programs.

Sources of funding
The study shows that federal sources of funding have played an important role in boosting agriculture performance in São Paulo. Between 2001 and 2014, EMBRAPA invested R$240 million in projects at its units in São Paulo State, with investment peaking in 2006 (R$46.6 million), 2009 (R$38.7 million), and 2011 (R$33 million). In the same period, the Brazilian National Council for Scientific and Technological Development (CNPq) directed R$331.3 million (adjusted for inflation) to agriculture projects and research grants at São Paulo State institutions. For other agencies, the exact amount of investment could not be determined. The Brazilian Federal Agency for Support and Evaluation of Graduate Education (CAPES) issued 10,500 graduate grants in agriculture programs in São Paulo between 2000 and 2014, but consolidated data on the amounts involved are not available. The Brazilian Funding Authority for Studies and Projects (FINEP) and the Brazilian Development Bank (BNDES) have funded projects in industry, with especially strong investment in technology and innovation. BNDES provided R$3.5 billion to agriculture in São Paulo State between 2002 and 2014, largely to the sugarcane, citrus, beef, and pulp value chains.

This was not the first study to investigate the extent of economic returns from investing in agricultural R&D in São Paulo. In 2002, Paulo Cidade de Araújo, from ESALQ-USP, also assessed the impact of human-capital investment on agriculture in the state, albeit using less complete data sources than in the current project. The rates of return found in this previous research were lower than in the current study, but because the two studies relied on different data, they are not directly comparable.