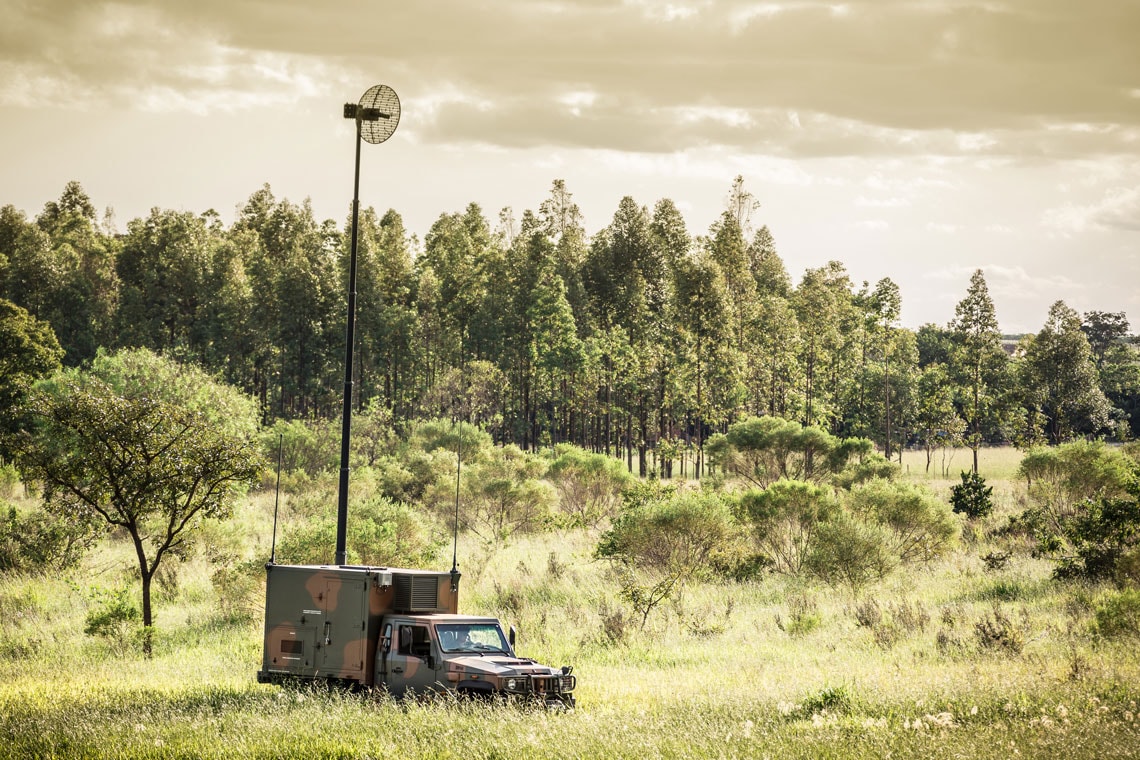 In about six months, a 650-kilometer (km) stretch of Brazil’s border with Paraguay will be receiving a sophisticated surveillance system. This is the approximate date the Brazilian Army estimates that Phase One of the Integrated Border Monitoring System (SISFRON) will be 100% operational. SISFRON, currently one of the Armed Forces’ most significant programs, will use an integrated set of radars, sensors, and communications systems to detect and report physical movement in real time along the Brazilian terrestrial border. Viewed by experts as an important incentive for Brazilian industry, the system’s objective is to enable state and federal defense and security agencies to curb illicit acts such as arms trafficking, drug and contraband smuggling, cargo and vehicle theft, environmental crime, and prevent border conflicts.

The monitoring system will stretch along the 16,886 km that delineate the borders between Brazil and its 10 neighboring countries. When ready, it will monitor an area of 2,553,000 square kilometers—27% of the Brazilian territory—spanning 570 municipalities in 11 states, from Amapá to Rio Grande do Sul. The system was conceived in 2011, and the initial commitment was for the federal government to invest $12 billion over 10 years in order to complete the project in 2022. Today the project continues as budget permits. The deadline has been extended, and current estimates expect it to be completed by the middle of the next decade.

The difficulty of building such a massive surveillance system results from its very complexity. One of the characteristics of the Brazilian border is its geographical diversity. It ranges from stretches of dense forest and torrential rivers to urban areas where a city street marks the boundary between countries, to wilderness trails that are easily transformed into drug and contraband smuggling routes. According to Brigadier General Sérgio Luiz Goulart Duarte, director of the SISFRON Program, this diversity demands the adoption of technological solutions for monitoring and communication that fit the characteristics of each location, and the operational capacity of diverse military commands.

Currently, Brazilian border surveillance is carried out by the Federal Police (PF) at legal border crossings, and in other areas done in conjunction with the respective regional Army military commands. That isn’t going to change. Surveillance missions are performed on routine patrols or driven by information and evidence collected at random. With SISFRON, a host of electronic resources will continuously collect and transmit data, enabling immediate action. 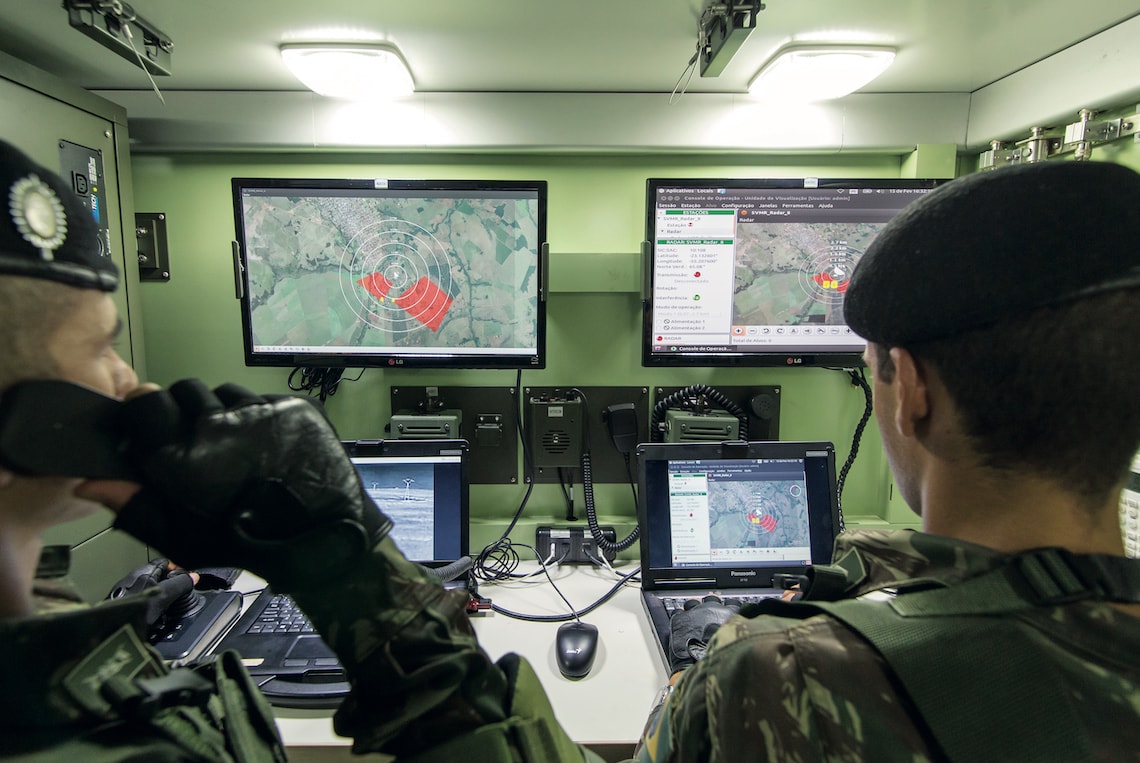 SISFRON, both as an idea and as a system, is based on the Amazon Surveillance System (SIVAM) and the Amazon Protection System (SIPAM), projects implemented in the first decade of this century aimed at monitoring the Amazon region. The ability of Brazilian companies and institutions to design a system the size of SISFRON, according to experts, is mainly a result of the fact that the country participated in developing SIVAM in conjunction with the manufacturer Raytheon.

Nationalization
The Savis Tecnologia e Sistemas firm, part of the Embraer Defense & Security group, is integrating the first phase of the program, i.e., they are responsible for the technological convergence and management of multiple suppliers. “We are applying all the capabilities Embraer has developed in aerial systems engineering to manage a ground defense system,” states Savis CEO Nilson Santin.

The SISFRON technology architecture is the same as that adopted by countries such as the United States, Russia, Israel, and Germany to protect their terrestrial borders, except that the Brazilian system is the only large project currently under implementation. “It is a highly advanced system, which opens up market possibilities for Savis and the suppliers involved in the project,” Santin adds. The potential commercial target for Savis and the other companies involved in developing SISFRON are countries that don’t have well-developed defense industries.

One of the Brazilian Army’s requirements is to construct as much of the SISFRON equipment as possible nationally; the local content participation currently is around 75% of deliveries. Savis itself, together with Embraer, is responsible for the development of some of the principal monitoring equipment, such the MAGE/COMINT (Electronic Warfare Support Measures/Communications Intelligence) sensors hardware, which work with software from German firm Saab Medav. The MAGE/COMINT is an electromagnetic signal sensing system that tracks radio communication, often used in electronic warfare. 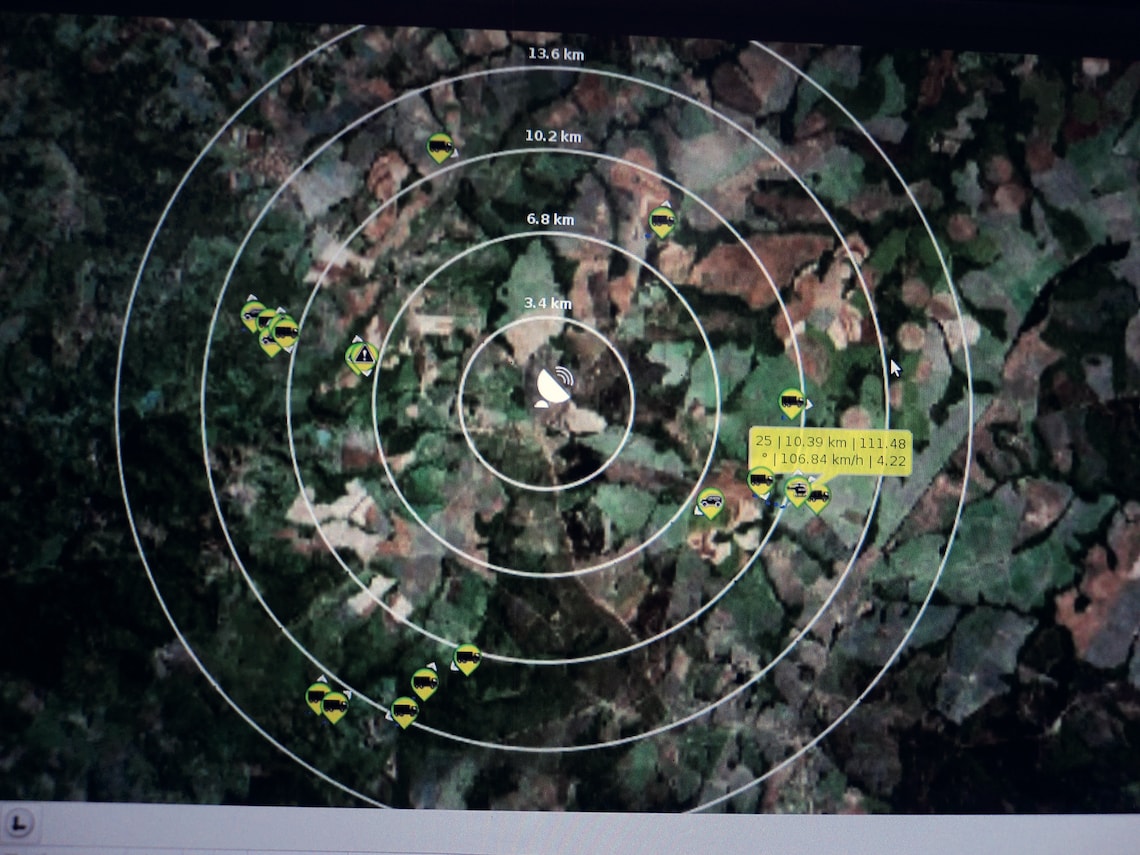 Another completely Brazilian development is the Sentir-M20 radar, which can detect a person crawling at a distance of 2 km, or walking at 10 km, and an armored vehicle from 30 km away. As Savis CEO Fabio Caparica explains, system integration allows for an operation where the Sentir-M20 detects a target and triggers a camera to accompany it. Real-time information transmitted to the command center enables target identification and decision-making.

Based in Porto Alegre, Rio Grande do Sul, AEL Sistemas, a subsidiary of the Israeli company Elbit, is the supplier of optronic equipment for SISFRON, such as day and night multisensor cameras, thermal sensors, and night vision systems. Sergio Horta, CEO of AEL, explains that components and parts for the equipment are made in Israel, and Brazilians are in charge of assembling, integrating, and maintaining the systems. “The idea being that at the end of the installation cycle, Brazil will be able to maintain the sensors in operation, regardless of the external availability of technical assistance or even of components,” he states.

The encryption system (transforming a text into code) and the authentication (protection of the transmitted message) adopted by SISFRON are Brazilian products. CommGuard is a platform developed by Kryptus Information Security—based in Campinas, São Paulo—with the support of FAPESP. Kryptus CEO Roberto Gallo believes it’s essential that a defense system adopt a Brazilian solution for guaranteeing communications security.

Gallo notes that some of the systems sold by companies from other countries have built-in mechanisms—by legal statute or corporate guidelines—that allow communications interception and data access. This would allow foreign authorities to access sensitive information. “A defense-monitoring system with its confidentiality violated loses strategic sense, and could become useless,” he states. 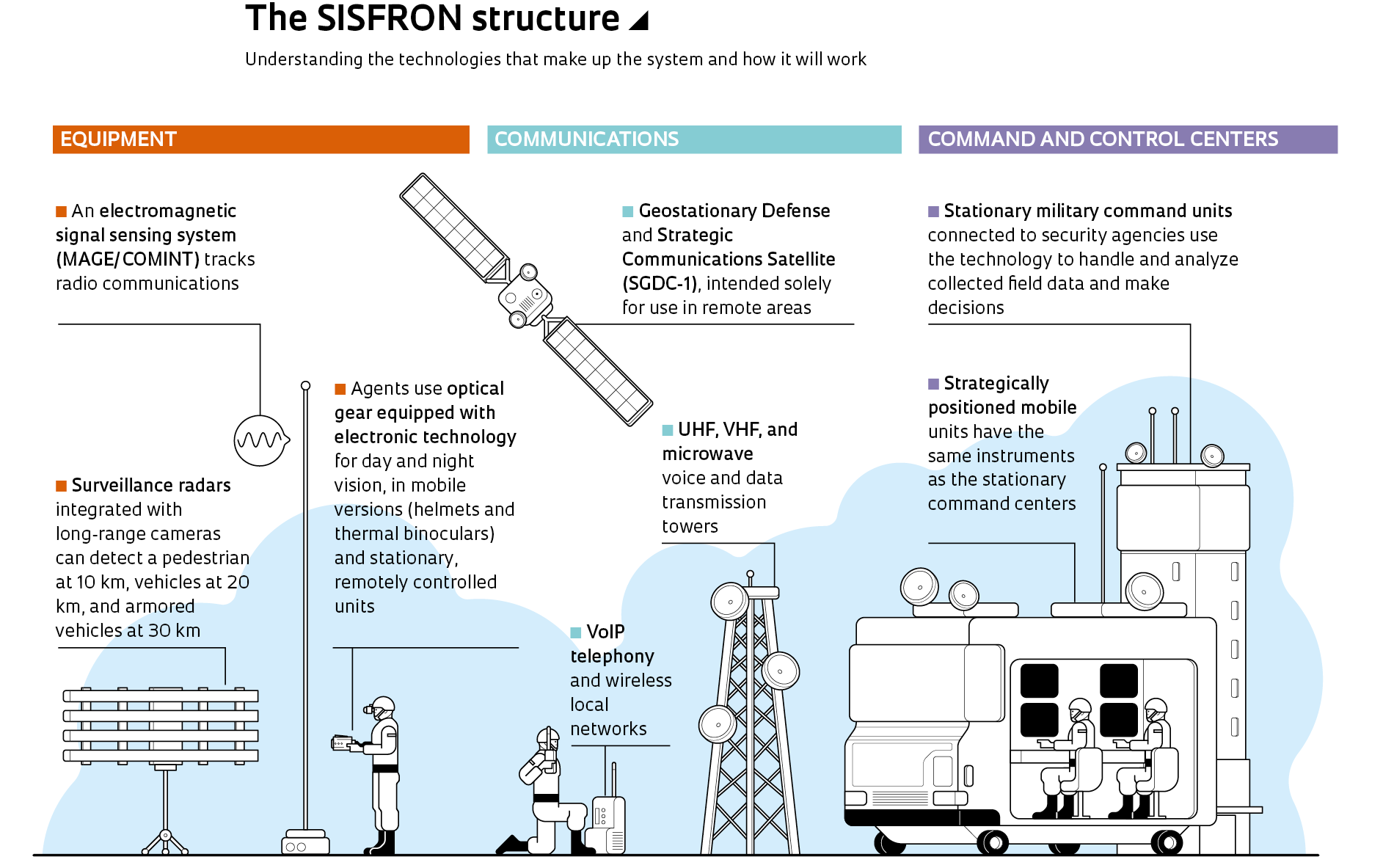 Professors Héctor Luis Saint-Pierre and Samuel Alves Soares, members of the International Defense and Security Study Group (GEDES), are skeptical regarding SISFRON’s effectiveness in combating illicit border activity. “There is a fascination for technology that supersedes strategy,” says Soares, who is also coordinator of the San Tiago Dantas Interinstitutional Graduate Program in International Relations.

In Soares’s view, public investment in defense technology is slow, limited by budget availability. “Technology is nonetheless available on the market for those who have the money, and that would be the traffickers, who are able to buy systems that circumvent the adopted technology structures and recruit Army-trained ex-soldiers to gather information and develop alternative routes,” the researcher stresses.

According to Saint-Pierre, terrestrial trafficking in smuggled weapons, drugs, and contraband goods occurs primarily at traditional border crossings where infrastructure and logistics are already established, not in remote locations. “It’s a fight that’s better done with intelligence and international cooperation,” he says. In his view, what’s effective—and more important than new technologies—is knowing in advance where the illicit goods will cross, which public officials are collaborators, and how money is moved to finance the operations.

SISFRON director General Duarte says the system does not replace the need for intelligence work at traditional border stations. Its function is to keep alternative routes from being used instead of conventional crossings, which are already supervised by public security agencies. According to the military, in 2016, while already in partial operation, SISFRON enabled the seizure of 133 tons of drugs, cigarettes, weapons, and ammunition that were taking alternative routes in Mato Grosso do Sul. In 2018, it was 204 tons. “Ideally, SISFRON would be extended along the entire Brazilian border as quickly as possible,” he says. 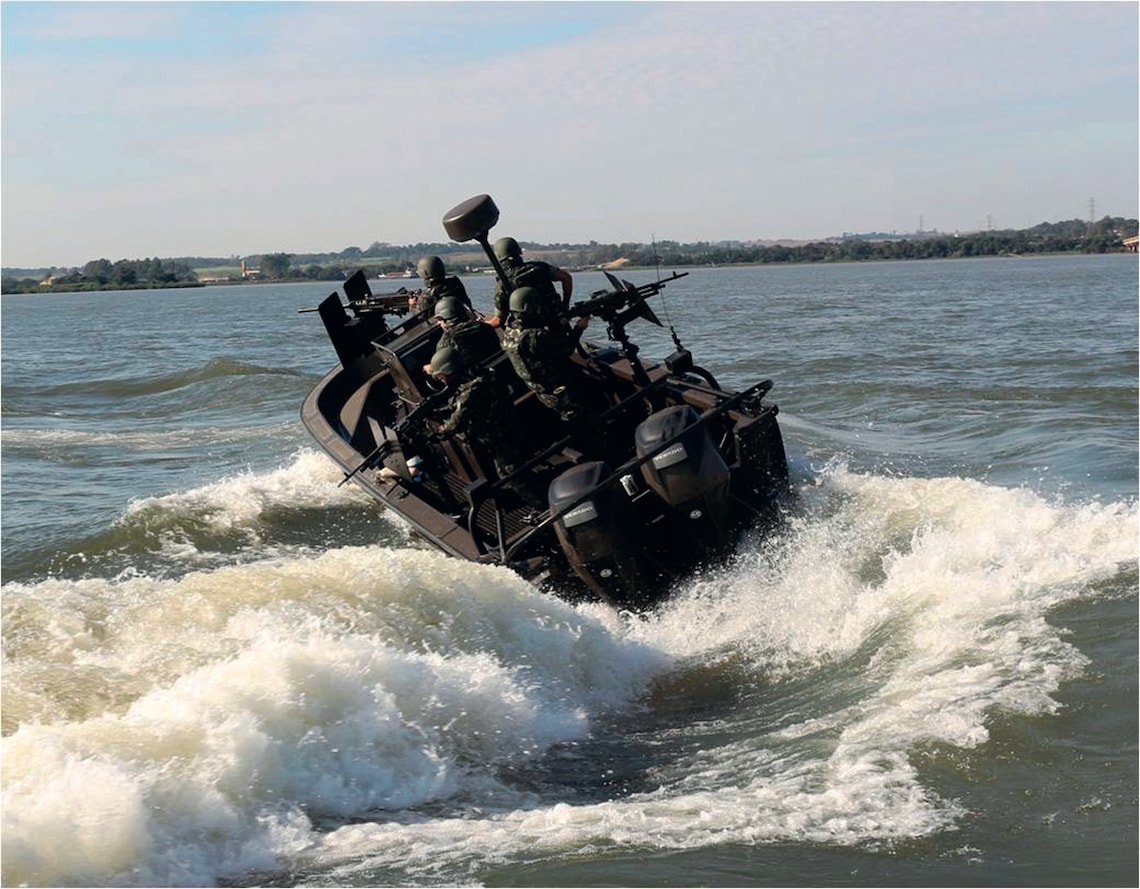 Army reconnaissance and surveillance vessel on a mission on Lake Itaipu, on the border with ParaguayBrazilian Army

Slow implementation
Deployment of the system progresses slowly. When it was in the planning stage, the estimated average annual expenditure for implementation alone was R$1.2 billion. The funds actually invested since the beginning of the project in 2011, however, averaged R$204 million per year. In 2019 the estimated budget was R$310 million. After budget restrictions, it was R$220 million. “We are executing the project according to what funds are released by the government,” says General Duarte. The current schedule projects SISFRON’s completion for 2035, when the state of Amapá will be integrated into the system.

Implementation of Phase One began in 2015 and is now 90% active, but still lacks the integration of remote areas, which depend on satellite communication for transmitting collected data to the control and command centers in Dourados and Campo Grande, in Mato Grosso do Sul. It’s a difficulty that General Duarte believes will be overcome once ongoing negotiations conclude regarding use of the Geostationary Defense and Strategic Communications Satellite (SGDC-1), controlled by Telebrás and the Ministry of Defense.

Roberto Gallo, who also chairs the Brazilian Defense and Security Industries Association (ABIMDE), does not believe the budget restrictions mean that SISFRON will be a technologically outdated system when implemented, because at every phase the most up-to-date versions of equipment are purchased. In addition, he points out that defense technology is designed to be relevant for decades, and is typically scaled to be more than ten years ahead of solutions available on the civilian market, so that it can’t easily be circumvented by traffickers, smugglers, and other criminals operating in border areas.