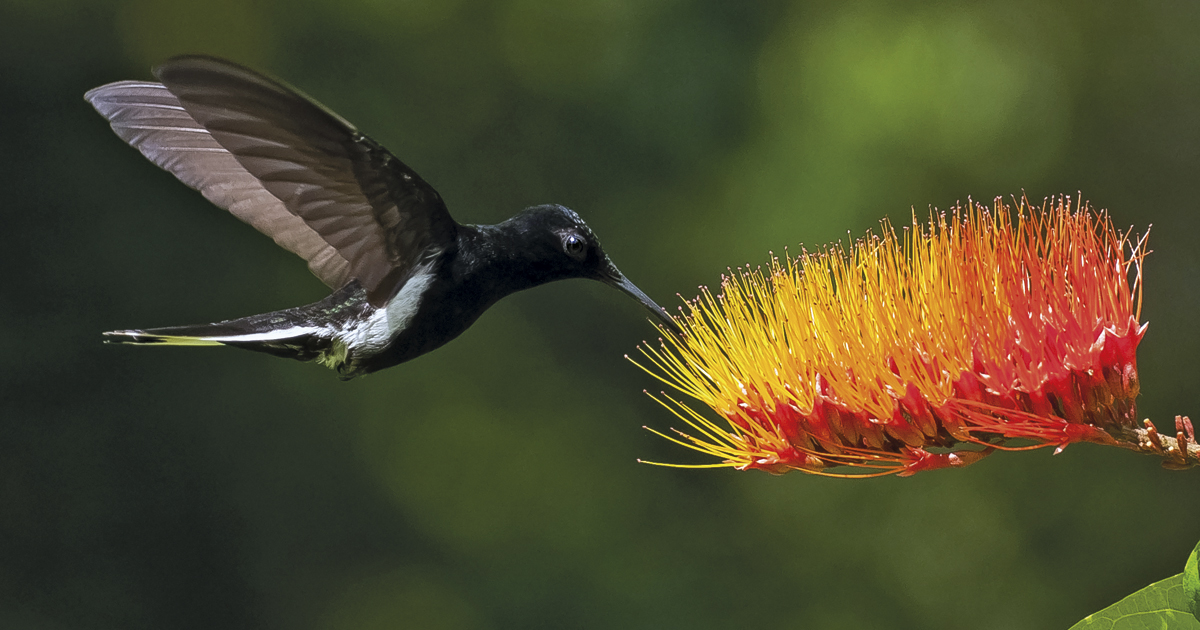 The black jacobin hummingbird, which vocalizes at a higher frequency than other birds are capable of hearing

Commonly found in mountainous regions of Uruguay, Argentina, and the Atlantic Forest in Brazil, the black jacobin hummingbird (Florisuga fusca) has an intriguing characteristic: its song reaches frequencies higher than the voice of a soprano singer (the highest vocal range for human beings) and is inaudible to other bird species. Forty-eight species of birds with well-known auditory profiles are unable to hear the Florisuga fusca. They are capable of hearing sounds in the 6,000–7,000 hertz (Hz) range, but the black jacobin’s song, which is composed of three very short syllables, each just 60 milliseconds long, has a frequency of 10,000–14,000 Hz, close to the human auditory limit. Scientific interest was sparked by sporadic reports of the hummingbird producing very high sounds or making jaw movements typical of vocalization without apparently producing any sound. A research group led by Brazilian neurobiologist Cláudio Vianna de Mello, a professor at the Oregon Health & Science University, USA, characterized the Florisuga fusca using 887 sound records from about 50 specimens found in the forests of Santa Teresa, Espírito Santo State, Brazil. The region is known as “the land of the hummingbirds” due to their abundance in the area, and is the birthplace of ecologist Augusto Ruschi (1915–1986), who was famous for his studies of hummingbirds and orchids. In 97% of cases, the black jacobin’s song consisted of three short syllables. The birds generally emit the sounds during flight, as a means of interacting with other birds of the same species near food sources (Current Biology, March 5). According to the researchers, the frequency of these vocalizations is higher than the recorded auditory range of any bird species, including those renowned for their good hearing, such as owls. “We also recorded harmonic elements in the ultrasound range,” says Mello. He and his group still do not know why the species developed the ability to produce such high-pitched vocalizations. “It could function as a private communications channel,” he says. This could only be the case if the black jacobin has specialized hearing to allow them to hear very high-pitched sounds. “If they do not have this special auditory sensitivity, their vocalizations may have other functions. Both scenarios are fascinating.”