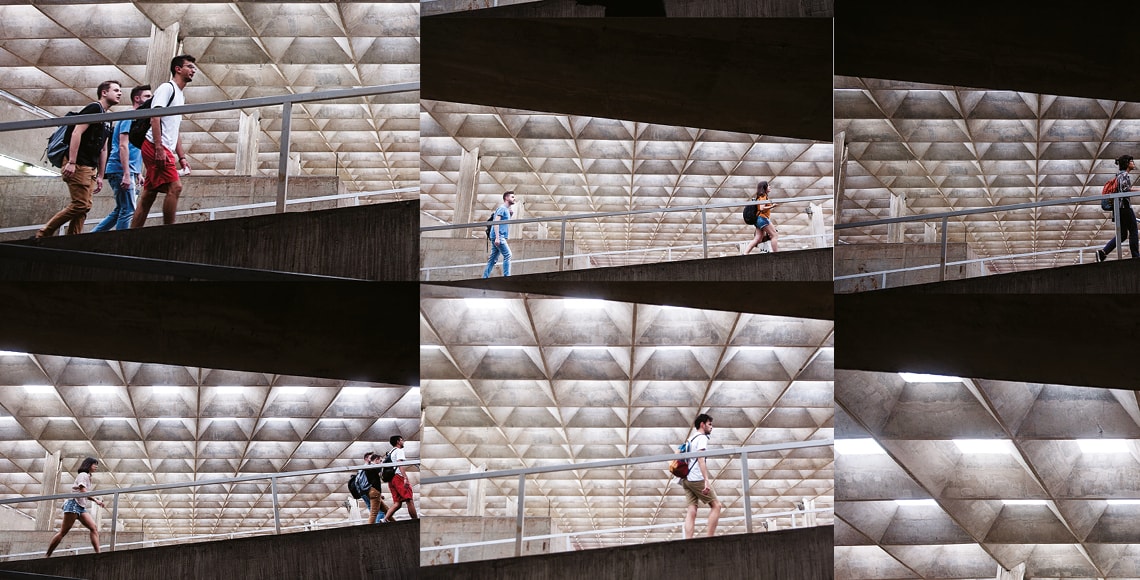 Since acquiring financial independence 30 years ago, São Pauo’s three state universities—the University of São Paulo (USP), São Paulo State University (UNESP) and the University of Campinas (UNICAMP)—have seen their undergraduate enrollment increase by a factor of two, from 57,000 students in 1989 to 119,000 today. Annual student places have also expanded by 76% and annual graduates by 135%. Around 22,000 undergraduate students enrolled in 2019 across the three institutions, compared with 12,600 in 1989; and 16,000 students successfully graduated last year, up from 6,900 three decades ago. Growth has been achieved both through new program offerings in fields such as sports science, environmental management, and wood engineering, and through geographic expansion. Today, the three institutions combined have campuses in 33 municipalities of São Paulo State, 12 more than in 1989.

All macroregions across the state are now served by one or more of the trio. USP recently opened campuses in Santos and Lorena, and new programs in São Paulo, Ribeirão Preto, and São Carlos. UNICAMP, which has a presence in Campinas, Limeira, and Piracicaba, now has a second campus in Limeira, home to its School of Applied Sciences. Out of the three universities, UNESP has been the most responsive to demand for state universities in São Paulo’s smaller cities. “In 1988, we were present in 15 cities. Today our presence has grown to 24 municipalities,” says UNESP’s associate dean for undergraduate student affairs, Gladis Massini-Cagliari.

UNESP was formed in 1976 by a merger of several existing schools and public institutes in cities such as Aaraquara, Jaboticabal, and Botucatu, and has always had a decentralized footprint, even more so after being granted autonomy. “UNESP is the only state university with a presence in all regions of São Paulo, including those with a lower human development index,” says Massini-Cagliari, referring, for example, to a campus established in the early 2000s in Registro, Vale do Ribeira, offering programs in crop science and fish science.

Other cities where UNESP has recently established a presence include Ourinhos (geography), Itapeva (wood and production engineering), São João da Boa Vista (electronic, telecommunications, and aerospace engineering) and Rosana (tourism and energy systems engineering). The university’s program offering has grown from 54 in 1988 to 136 currently. Many degree programs at the university are both high in demand and well ranked, such as crop and veterinary sciences (Jaboticabal), medicine (Botucatu), and chemistry (Araraquara). But some, newly created programs have struggled to gain traction. Examples include the geography program in Ourinhos, which has attracted fewer candidates than needed to fill available places, and the tourism program in Rosana, where students are unable to find internship opportunities for lack of hospitality businesses in the region. 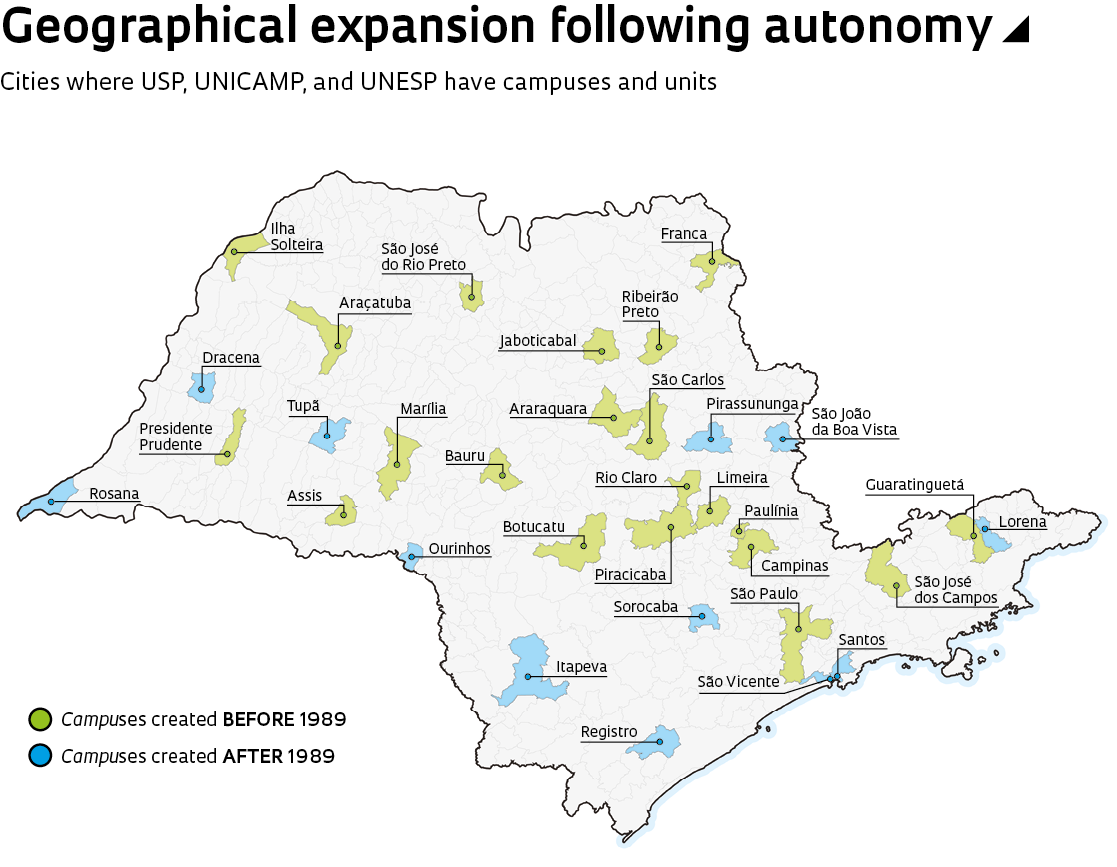 The new campuses were set up with extra-budgetary funds, but have to be maintained with funds out of the regular budget: a percentage of state tax revenue that was earmarked in 1989 under the state decree granting financial autonomy, plus revenues from industry collaborations, services, and financial investments. In 2015, UNICAMP opened a new campus in Limeira, housing its School of Applied Sciences. “When this unit was created, the state government committed to increase the university’s tax allocation by 0.05%, but ultimately failed to deliver on its promise,” says physicist Marcelo Knobel, dean at UNICAMP.

Increasing access to undergraduate education was among the commitments required at the time autonomy was granted, with the three universities undertaking to offer at least one-third of their spots in night programs—in the 1980s virtually all programs were offered during the day only, making them inaccessible to those needing or planning to study while working. Knobel notes that despite the growing number of places available at the three institutions, a large contingent of high school graduates in São Paulo is still unable to access public higher education. “The three universities now offer 22,000 spots each year. When combined with places available at federal universities and state schools of technology (FATECs) in São Paulo, the figure comes to about 80,000. But public high schools alone produce around 500,000 graduates each year,” says Knobel, who currently serves as president of the Council of Deans of State Universities in São Paulo (CRUESP).

Neither USP, UNICAMP, nor UNESP would be able to dramatically increase their undergraduate spots, he says, without a toll on their also-important research and graduate education programs. But they have recently made efforts to tackle the elitization of high-demand programs, such as medicine and engineering, where places have typically been taken mostly by students graduating from private schools. Affirmative action policies have been adopted to aid students from public schools in getting into college, and to help make universities as ethnically diverse in makeup as Brazilian society. This has led to a growing presence of students from low-income families. At USP, for example, students with a household income between 1 and 5 minimum wages now account for 45% of freshmen, an improvement from 37% in 2017.

In the early 2000s, USP and UNICAMP introduced admission exam bonuses to facilitate admission for graduates from public schools. The strategy has so far been successful, but less so than the quota systems that have been in place at federal universities over the past decade. In 2012, the São Paulo government launched the São Paulo State Merit-Based Higher Education Inclusion Program (PIMESP), requiring 50% of places to be reserved for public school students and 35% for students self-identifying as black, mixed race or indigenous. To meet the requirement, the three institutions created quota-based mechanisms and other initiatives designed to reconcile diversity with student quality. Previously, in 2010, UNICAMP had already created a two-year program for high-achieving public high school students in Campinas, called the Interdisciplinary Higher Education Training Program (ProFIS)—on completing the program, the top-performing students are waived through the admission process. This year the university introduced additional admission pathways, such as special admission exams for indigenous peoples and the opportunity for science Olympiad medal winners to gain admission without taking entrance examinations, a pathway that is also being introduced at USP and UNESP. 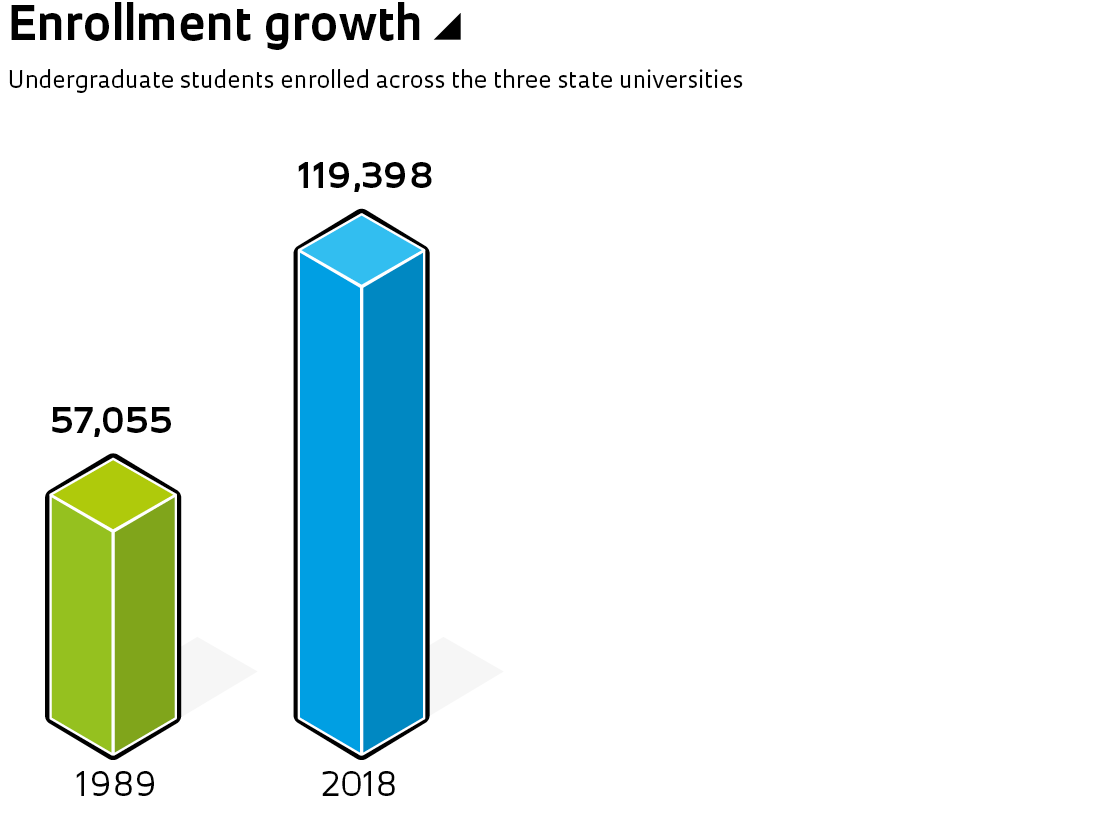 Academic freedom has also enabled São Paulo’s state universities to develop innovative learning experiences. A case in point is the School of Arts, Sciences, and Humanities a USP campus built in 2005 in the east side of São Paulo, an area not previously served by public higher education. The campus offers a set of core subjects that are common across the different programs, a set of career-specific subjects, and coursework devoted to solving real-world problems, providing students with more freedom of choice. As a branch campus of USP’s main campus in São Paulo, the new unit offered programs not then available in the city, including public policy management, information systems, gerontology, and textile technology.

“Autonomy made it possible to achieve well-planned growth in undergraduate offerings and introduce innovative program designs that conform to national and state guidelines while providing new possibilities for students,” says gynecologist Edmund Baracat, associate dean for undergraduate student affairs at USP and a professor at the School of Medicine (FM). Other initiatives include a more flexible medicine program curriculum at FM, designed to break silos between departments and campuses, and a new Institute of International Relations, with a cross-disciplinary program curriculum.

The challenge facing state universities over the next few years will be a much-needed overhaul of their undergraduate curricula, says Marcelo Knobel. “They’ve become outdated. An education model is needed that involves fewer classroom hours and more hands-on experience. One idea would be to create a single admission pathway with different endings, allowing students to choose the path they will take during the course of the program,” he says. Knobel believes institutions will become more interconnected when it comes to undergraduate education, allowing students to take courses offered at different campuses.