A paper released in December by a group of economists paints a troubling picture of the innovation and intellectual-property landscape in Brazil and the impact it has had on development. The study, commissioned by the Brazilian Intellectual Property Association (ABPI), shows an entrenched pattern in which Brazilian companies generally innovate little, while foreign companies have filed growing numbers of patent and trademark applications in Brazil, indicating both the importance of intellectual property protection and its still limited use by local industry. It also underlines the challenges faced in correcting long-standing distortions. Public universities and individual inventors continue to claim the lion’s share of patent counts in Brazil, while in developed countries that share is typically held by industry. Patent applications also take an unreasonably long amount of time to be processed—10 years on average—and are growing at a slower rate than in other emerging countries. Between 2000 and 2016, the number of invention patent applications worldwide more than doubled, from 1.4 million to 3.1 million. In Brazil, applications rose from 17,258 in 2000 to 25,658 in 2017.

“We’re increasingly lagging behind countries competing directly with our industries in the global marketplace,” says Antonio Marcio Buainain, a professor at the University of Campinas (UNICAMP) Institute of Economics. He coauthored the paper—titled “Propriedade intelectual, inovação e desenvolvimento: Desafios para o Brasil” (Intellectual property, innovation, and development: Challenges facing Brazil)—with Roney Fraga Souza, a professor in the School of Economics at the Federal University of Mato Grosso (UFMT). “We’re gradually regressing into a commodity-based economy, while we clearly have the socioeconomic and demographic conditions to do otherwise,” says Buainain. The situation is even more dramatic when comparing Brazil’s performance to other emerging economies: in the late 1970s, Brazil was filing three times as many US patent applications as South Korea; by 2013 the Asian country was filing 43.5 times as many as Brazil.

But the findings from a survey that Buainain and Fraga Souza conducted on 4 million academic résumés on the Lattes platform are more optimistic. There were 15,607 researchers who reported intellectual property protection activity: they filed a total of 27,837 patent applications, of which 10,552 were approved and issued as patents. The survey found that 84.5% of these researchers were academically prolific, with an average of 27 published articles. According to the study, these researchers are evidence against the stereotypical view that pits scientists into two groups: the academic types versus the pragmatists who work closely with industry and focus on practical innovation and patents. “In fact, our results show that the more academic researchers are precisely the ones filing the most patent applications, and that there is no tradeoff between publishing and patenting. This should come as no surprise as, after all, researchers’ patents draw precisely on the knowledge and experience they have gained from their research,” says Buainain. “Our findings dispel an argument often made by backward forces opposed to closer links between universities and industry: that researchers will end up focusing their efforts on personal gain rather than knowledge for the common good,” he says. Voices against university-industry collaboration will often be heard, notes the economist, among professors’ associations and some researchers in discussions about the new science, technology, and innovation framework introduced last year. 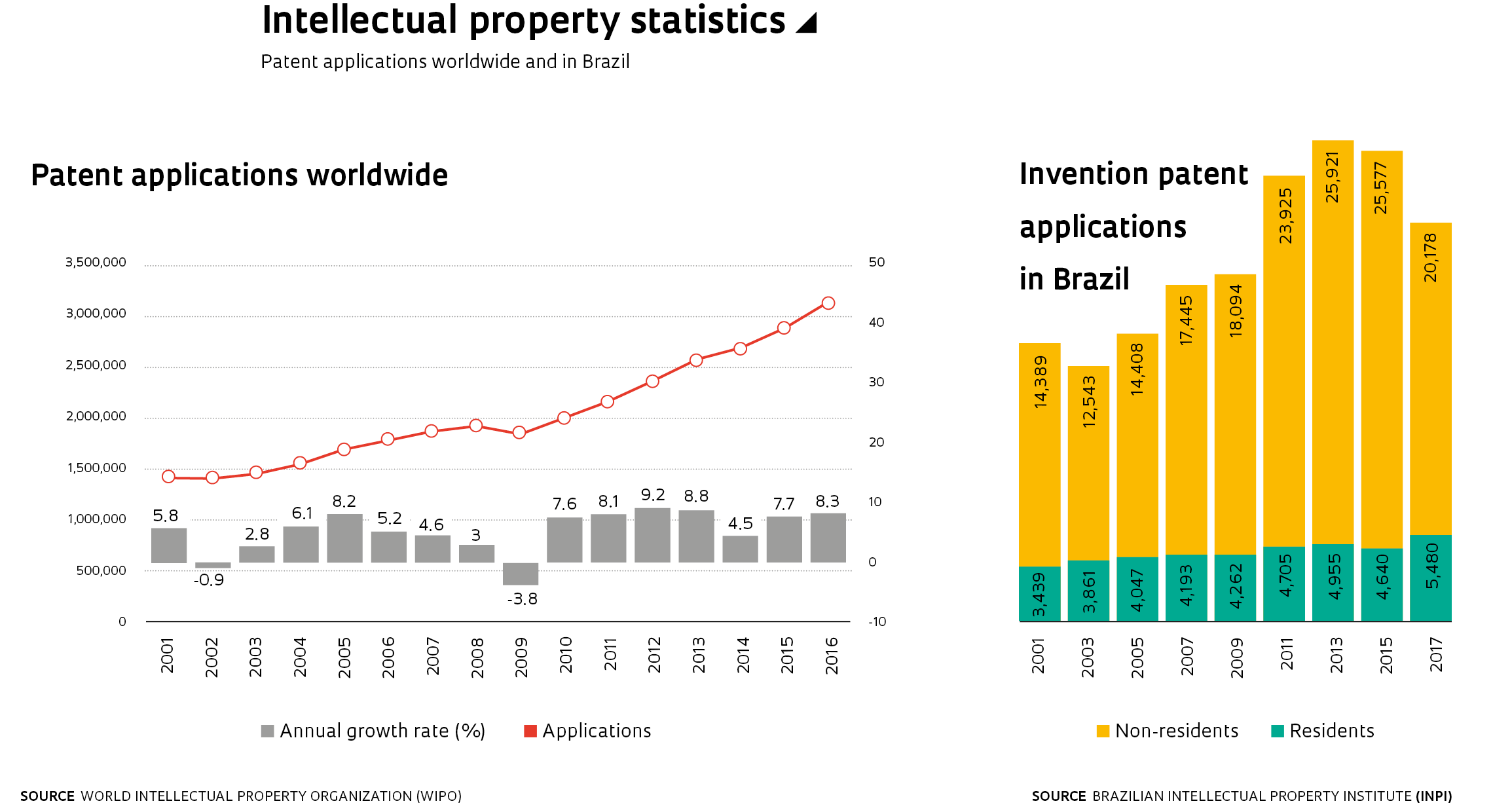 The survey also estimated the impact of papers authored by researchers with patents to their name and found that they generate five times more citations than papers by researchers with no patents. Only a handful of these talents, however, are in industry. Less than 10% of researchers work in an R&D capacity at companies, 73% work at universities, and 15% at public or private research institutes. “Researchers at universities and higher learning institutions in Brazil account for approximately two-thirds of the country’s patents, even though many of these universities lack institutional support for the patenting process,” says Roney Fraga Souza.

But Marcelo Pinho, of the Center for Exact Sciences and Technology at the Federal University of São Carlos (UFSCar), observes that previous research done in 2013 by researchers from the Ribeirão Preto School of Economics, Management, and Accounting (FEA-RP) at the University of São Paulo (USP) had already looked for a cause-and-effect relationship between publishing and patenting among a group of 316 researchers in the fields of exact and earth sciences, but found none. “Although researchers who interact more with companies are clearly more prolific publishers, this does not necessarily mean that scientific productivity is itself a result of interaction with industry,” he explains. “It is more likely that the most competent researchers perform better both in scientific research and in collaborations with industry.”

A look at the origin of Brazilian patents reveals a strong linkage to traditional industries, such as construction and machinery for the oil and gas, electric power, and agribusiness sectors, but not to frontier areas. “Brazil appears to be on the sidelines of the new economy and is yet to claim a significant position in any of the key areas of industry 4.0, in which manufacturing is heavily automated and linked to the internet,” says Buainain. Marcelo Pinho, of UFSCar, says patent patterns in Brazil reflect the country’s industrial fabric and its foreign trade. He notes that Brazil’s high-tech industry is not only dwarfed by other countries, but is also typically focused on the domestic market and less technology-intensive nodes in the value chain. “And the companies with dominant positions in these sectors are multinationals producing most of their R&D outside Brazil. So it is hardly surprising that Brazil lacks a strong patent position in the new economy,” he says. 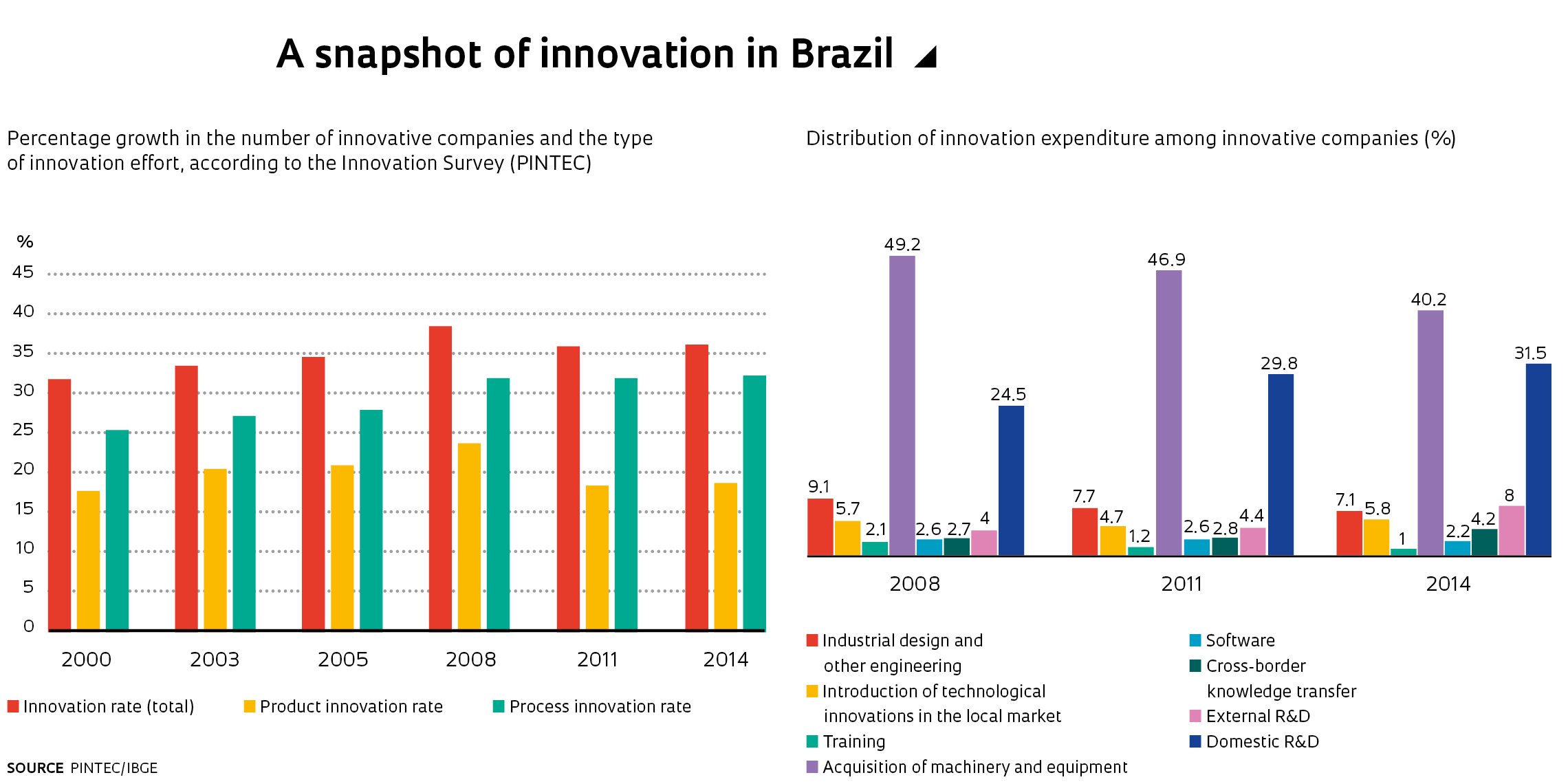 The study found a notable increase in intellectual property protection within universities thanks to the growing number of innovation centers (Núcleos de Inovação Tecnológica, or NITs) created to identify research findings with potential commercial applications and license those technologies to companies. Universities have been especially active in certain states following the creation of innovation centers in Santa Catarina, Paraíba, Pernambuco, Bahia, and Ceará, although 70% of patent applications in 2017 were in São Paulo, Rio de Janeiro, Minas Gerais, Paraná, and Rio Grande do Sul. Buainain sees these efforts as somewhat exaggerated. “The role of the university is to generate and facilitate the dissemination of knowledge and technology. Practical innovation is the role not of universities, but of industry.”

Biologist Antonio Carlos Marques, coordinator of the USP Agency for Innovation, believes it is unfair to say that NITs alone are accountable for the exaggerated focus on patent applications. “Patents are a highly weighted metric throughout the system—whether one is applying for a productivity-based grant from CNPq [the Brazilian National Council for Scientific and Technological Development] or looking to improve a graduate program’s rank—and they get lots of media attention,” he says. “Our focus should be on the effectiveness of the innovation process. Out of the total number of patent applications, how many are successful and benefit society through licensing agreements? To what extent does each patent effectively provide a socioeconomic or environmental benefit for Brazil? By way of analogy, a patent application is comparable to a manuscript submitted to a scientific journal, and an issued but unlicensed patent is comparable to a paper published in an indexed journal that has never been cited.”

Antonio Marcio Buainain notes that universities and companies in Brazil engage in innovation on separate, parallel paths, which rarely converge. “Universities generate patents at their intellectual property offices and offer them to companies, occasionally attracting their interest in some form of arrangement, but not collaboration,” he explains. At universities and public research institutes, according to the paper, there has been progress in recent years largely thanks to the education system’s expansion since the 1990s and its growing number of active researchers. The private sector, however, has its own peculiar ways. “Brazilian companies generally innovate by buying technology. They typically incorporate innovations already in use in local and global markets—new only to the companies adopting them. This is certainly not the kind of innovation that will put Brazilian industry in any position of leadership or autonomy in the international marketplace.” 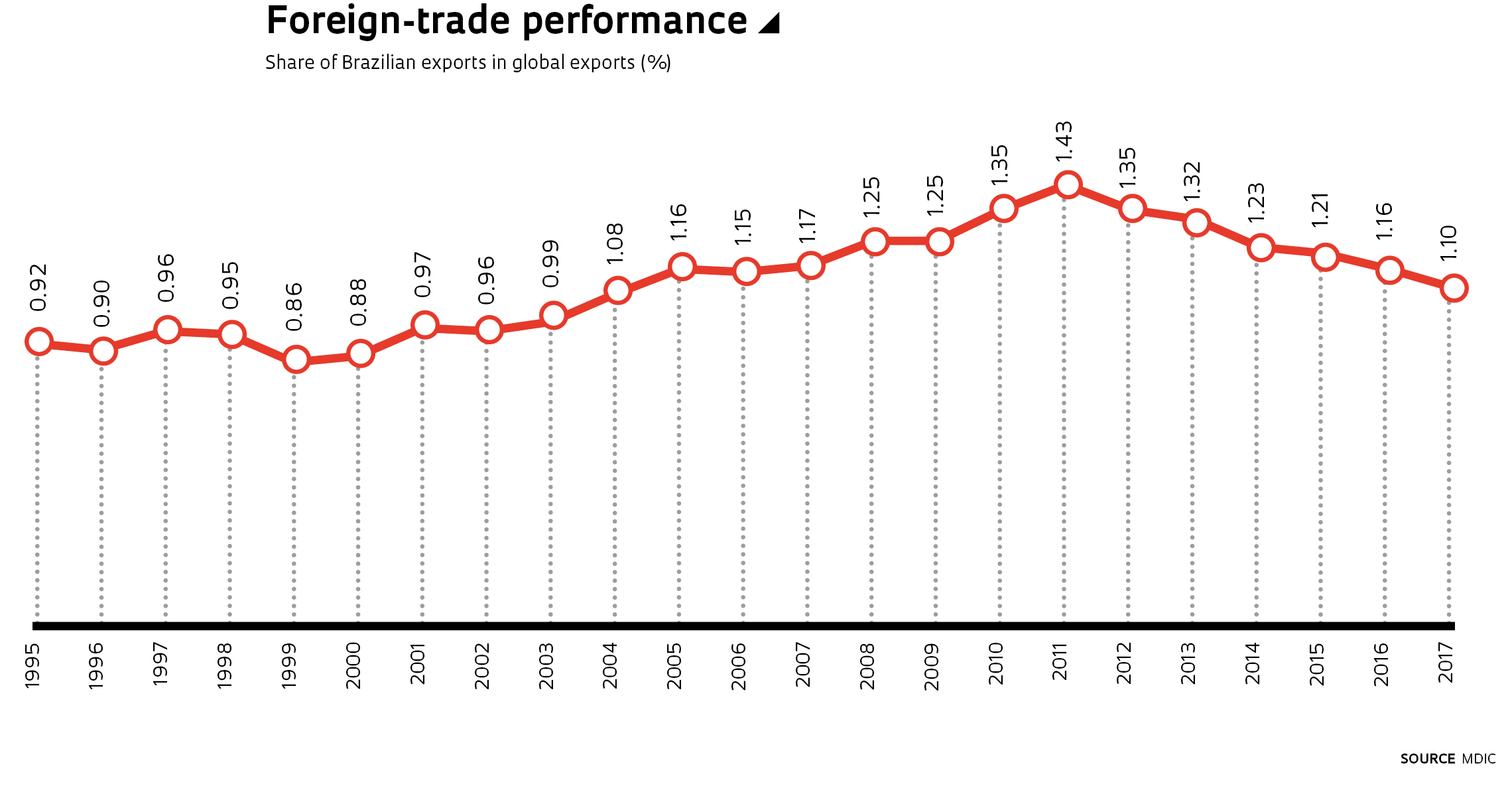 The UNICAMP economist explains that aversion to risk is a rational strategy that makes sense for the business environment in which Brazilian companies operate. “The Real Plan [a set of measures taken to stabilize the Brazilian economy in 1994] provided only limited economic stability,” he says, alluding to the exchange-rate fluctuation and changes in the regulatory frameworks for the oil and gas and power sectors over the last 20 years. “Even inflation has been five times higher than the average for more developed countries,” he explains. “Brazilian entrepreneurs are skilled at coping with crises and surviving in an environment of uncertainty and instability, but averse to the inherent risk of innovation.”

Brazil is not prepared to exploit open innovation, the study shows

But intellectual-property protection has now been rendered less important than in the past by the advent of open knowledge networks, in which knowledge and technology are developed in an open and collaborative environment, and the speed at which innovations are developed and then superseded by others makes patenting effort dispensable. “The value of digital-age businesses like Uber or Airbnb lies not in their patent portfolios, but in their accumulated knowledge and in their ability to create applications that competitors are unable to easily reproduce,” he explains. Brazil is not currently prepared to exploit open innovation, the paper shows. “Open innovation relies on an environment of high-density knowledge flows between academia and industry—an environment which in Brazil remains underdeveloped—and substantial investment in venture capital.”

The study is optimistic about the new science, technology, and innovation framework and the legal certainty it provides for collaboration between universities and businesses. In addition to better operating conditions at the National Institute of Industrial Property (INPI), which has long struggled to process patent applications efficiently, the authors suggest that a greater focus is needed on trademarks and their underutilization by companies in Brazil, and on geographical indications—intellectual property instruments used in many countries to link attributes such as origin or the history or culture of a region to a product. Last year the INPI received only 49 applications for geographical indications for products such as coffee, cheese, wines, and spirits.