Governor Orestes Quércia’s signing of the academic freedom decree (see the full text of the decree) was attended by officials such as José Goldemberg, then dean at USP, and Luiz Gonzaga Belluzzo, then Secretary of Science and Technology

The legal and budgetary framework that provided funding stability to state universities in São Paulo has now completed its third decade in force. On February 2, 1989, a decree by the then governor of São Paulo, Orestes Quércia (1938–2010), granted financial autonomy to the University of São Paulo (USP), the University of Campinas (UNICAMP), and São Paulo State University (UNESP), and allocated a fixed percentage of 8.4% of state sales tax (ICMS) to funding for the three institutions. The Council of Deans of State Universities in São Paulo (CRUESP), created two years earlier, was tasked with managing the distribution of funding, with USP initially receiving 4.46%, UNICAMP 2%, and UNESP, 1.94%.

The 1989 decree became a milestone in higher education in Brazil as a model that succeeded in bolstering and strengthening the country’s three largest research universities, and in providing academic freedom while maintaining competition for funding with other government agencies and departments. Today, USP, UNESP, and UNICAMP together produce 35% of all research indexed on the Web of Science platform. But for all these benefits, the framework introduced by the decree has remained unique to São Paulo; no peer states have since adopted similar principles, and no federal universities have been granted financial autonomy. It is also curious that the rules were introduced through a simple decree, whereas originally there had been plans to enact them through the State Constitution or ordinary legislation.

But the model has been reaffirmed each year in the annual budgets passed by the Legislative Assembly, and has been ratified by all state governors since, two of whom—Luiz Antonio Fleury Filho and Mário Covas (1930–2001)—in fact increased the percentage of ICMS tax allotted to universities, which since 1995 has stood at 9.57%. “This has set São Paulo apart from other states and illustrates the importance that São Paulo society attaches to universities,” says linguist Carlos Vogt, who served as dean at UNICAMP between 1990 and 1994. “No one has dared to desecrate this sanctuary.”

The granting of financial autonomy to state universities in São Paulo occurred in the historical context of Brazil’s redemocratization and, in particular, the passage of a new Federal Constitution. Article 207 of the 1988 Constitution calls for “educational, scientific, administrative, financial, and asset-management autonomy” at universities and requires them “to adhere to the principle of inseparability of education, research, and extension.” Physicist José Goldemberg, who served as dean of USP between 1986 and 1990, notes that the Constituent Assembly’s initial draft of this article contained a proviso that could have delayed implementation, or prevented it altogether. “The last part of the article stated that “autonomy shall be implemented as shall be provided by law.” This would have consigned the rules to ordinary legislation and could have delayed implementation, as would indeed occur with many other articles of the Constitution,” he recalls. Goldemberg was a close acquaintance of the deputy rapporteur of the Constituent Assembly, senator Mário Covas—he had worked with him during the André Franco Montoro administration (1983–1987)—and convinced him of the importance of removing the proviso and maintaining autonomy as a general rule. “The final draft removed the need for subsequent regulation,” says Goldemberg.

While the autonomy decree makes reference to Article 207 of the Constitution, Governor Orestes Quércia also had his own and contextual reasons for his decision. The crisis in the 1980s had led to runaway inflation and a succession of economic plans that tried, in vain, to contain it. And the resulting erosion of workers’ wages had fueled strikes that paralyzed state universities in São Paulo. “The governor felt that the pressure for funding and wage increases would be recurring. He was unfamiliar with the academic environment, but intuition led him to allocate a percentage of tax revenues and to leave to deans both the benefits and the burden of managing funds,” says Frederico Mazzucchelli, a professor at the Institute of Economics at UNICAMP, who previously served as State Secretary of Economics. Mazzucchelli recalls how Quércia confided his idea to him during a flight. “The governor said to me: ‘We give them the money and our troubles are over.’”

The university and research agenda gained traction in the 1980s and was supported by the Legislative Assembly, recalls Aloysio Nunes Ferreira

Mazzucchelli sought out Science and Technology Secretary Luiz Gonzaga Belluzzo, whom he knew from UNICAMP, and the pair got to work on developing a draft. “The initial reaction from deans was a mixture of surprise and suspicion; only the dean at UNESP, Jorge Nagle, was enthusiastic from the outset. They needed to be convinced that this was important,” he recalls. There were also opposing voices within the government to contend with. The then Secretary of Administration, Alberto Goldman, was opposed to committing tax revenues on the grounds that it would impose the agendas of certain interest groups on democratically elected governments. After several rounds of discussions with deans and secretaries, a formula allocating 8.4% of ICMS tax revenue was arrived at; this was equivalent to the average amount of funding the universities had received in the previous three years. “UNICAMP Dean Paulo Renato Souza [1945–2011], who had served as secretary of education years before, helped make the calculations,” Goldemberg recalls.

In February 1989, when the draft was ready, the governor called the deans to his cabinet and signed the decree into law. Geologist Paulo Milton Barbosa Landim, who had just replaced Nagle as dean of UNESP, recalls that the governor mentioned the pressure he had received from universities as one of his motivations. “He stated up front that, since universities had academic independence and he could not interfere in their management, then they should also have financial independence, which meant the deans would be left to deal with issues related to professors’ salaries.”

Carlos Vogt believes the discussion on the governor’s motives is secondary: “What’s important to remember is the context surrounding the financial autonomy decree and the governor’s merit in signing it. It’s a legacy he left that continues to yield important dividends for universities today.” Vogt believes the framework drew inspiration from a previous initiative in the state of São Paulo—the creation of FAPESP in 1962, with funding then provided by a government endowment fund and an allocation of 0.5% of state tax revenues to fund research. “FAPESP was born out of a movement within São Paulo’s 1947 Constituent Assembly that valued intellect, science, and culture. It created a paradigm that set the state apart and catalyzed a movement toward establishing financial autonomy at universities,” says Vogt, who served as chairman of the foundation between 2002 and 2007. 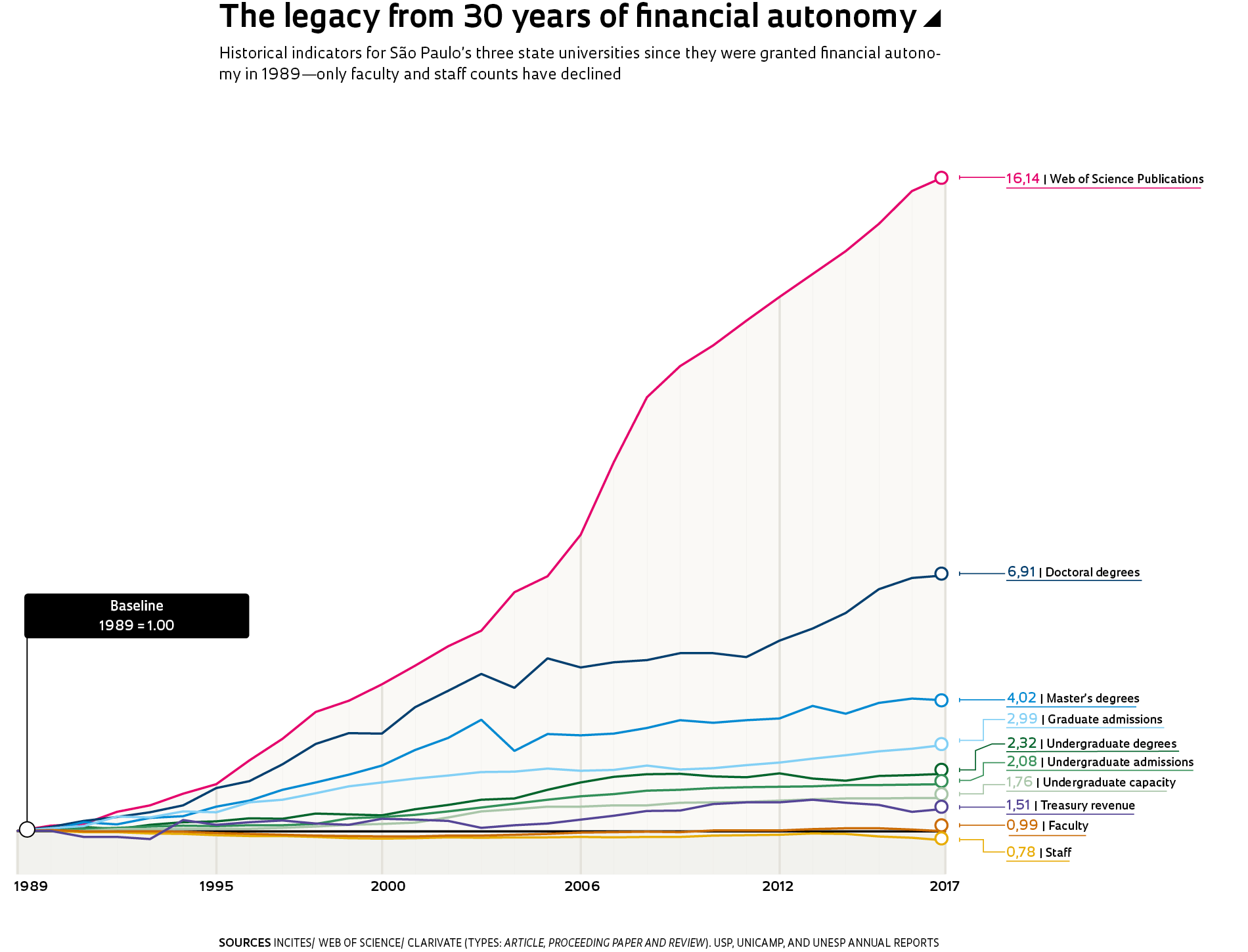 It was no coincidence then, he continues, that eight months after Quércia’s decree, the new State Constitution increased FAPESP’s allocation of state revenues from 0.5% to 1%, and added investment in technological development to its mandate. “The university and research agenda had gained momentum and was supported by state deputies affiliated with the Brazilian Democratic Movement Party (PMDB), who were a majority in the House,” recalls the then government House leader, Aloysio Nunes Ferreira, who authored the amendment to the São Paulo Constitution that increased FAPESP’s funding allocation. Other initiatives in support of science also marked the Montoro and Quércia administrations, he says, such as the creation of careers in research and the revitalization of state research institutes. “The redemocratization process had given traction to the university cause. Governor Quércia, a politician who had risen to prominence precisely during the redemocratization years, was sensitive to this,” he says.

The practical effect of financial autonomy is that universities were able to better organize and plan their development. They were able to pursue initiatives that began in the mid-1980s to reformulate faculty and staff careers in a manner better suited to each university, explains José Goldemberg. What is more, they no longer had to go hat in hand to multiple government agencies to get funding. “I remember having to go to the Office of Administration to discuss such trivial things as rules on paying day rates and overtime to the chauffeurs who drove deans from USP campuses in minor cities to São Paulo,” says Goldemberg. Following the decree, UNICAMP launched a Quality Program that encouraged professors to pursue doctoral degrees. “Half of the faculty then only had master’s degrees. Today they are virtually all PhDs,” says Vogt. “Even an environment of economic turbulence, such as in the wake of the Collor Plan in 1990, can be navigated by universities with a guaranteed source of funding.” 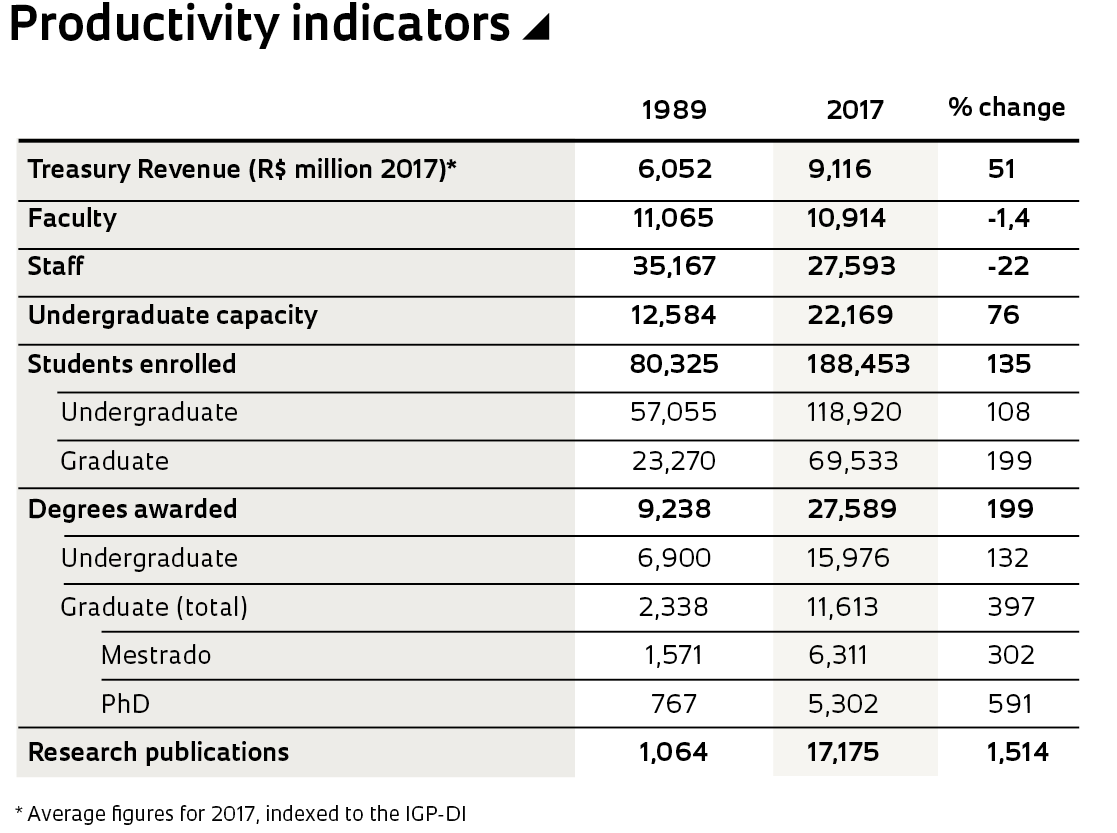 But there were disputes that still lingered. UNESP, the youngest and most decentralized of São Paulo’s state universities, was unhappy with the share it had been given in tax venues. “The calculation was based on the average funding the universities had received in the previous three years, but UNESP was unfortunate in that shortly before the decree, in August 1988, its fixed costs had risen significantly when it took over the Municipal University of Bauru. And this was not computed in the three-year average,” recalls Landim. The problem was mitigated by the decisions of Governors Fleury and Covas to raise the percent allocation in 1990 and 1995, although the increase was distributed proportionally among all three universities. “UNESP was the most active in these discussions,” says the former dean. He believes UNESP owes its consolidation to financial autonomy. “We modeled our institution after USP and UNICAMP, Brazil’s two best universities, and stable funding enabled us to lift quality.”

The financial autonomy decree contained a recommendation that was ultimately never followed. It suggested that personnel expenses should not exceed 75% of the funding universities received from the government. In recent years, growing payroll expenses and declining tax revenues as a result of the economic crisis have compelled universities to use their reserves and implement spending cuts, with salaries now exceeding total available funding. “If there is one thing that I regret it is not having fought to make that recommendation a requirement,” says José Goldemberg. “At the time, we thought it would be contradictory for the government to impose an obligation in a decree that gave us autonomy.” Funding tied up to salaries has become an obstacle to university autonomy, says the former USP dean. “Truly independent management requires that deans have a margin of funding to invest in modernization and in emerging fields. With the crisis, deans have now lost much of that maneuverability.”