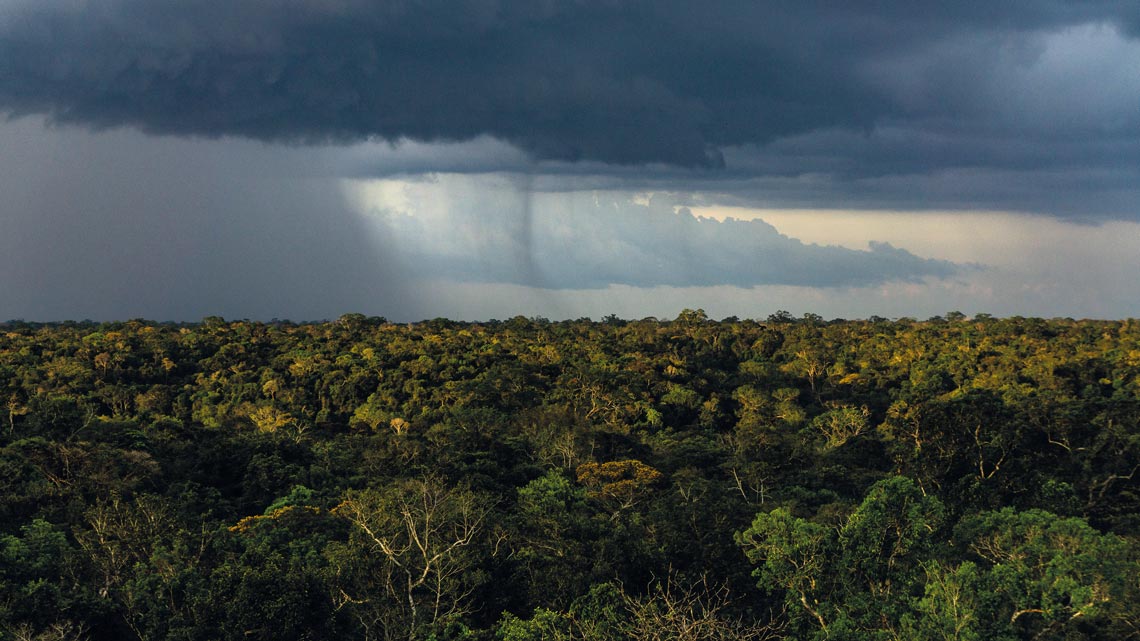 Raincloud over the forest in the state of Amazonas

If 60% of the Amazon lies in Brazil and the remaining 40% in eight other countries, why should the rest of the world be worried about the fate of the planet’s largest rainforest? It is not because it produces huge amounts of oxygen, a myth that resurfaces every time the fires burn stronger and deforestation rates rise in the region, as it did again this year, putting the so-called “lungs of the world” at risk. By day, the plants photosynthesize and turn solar energy into chemicals—mostly the carbohydrates (sugars) they need to live. During this process, they absorb water vapor and carbon dioxide (CO2), the most abundant greenhouse gas, and release oxygen. But at night, when they are not performing photosynthesis, they are just breathing instead, consuming oxygen and emitting CO2. The end result is that the forest consumes the same amount of oxygen as it releases. In fact, the amount of oxygen released by the photosynthesis of all vegetation on the planet has almost no impact on the levels of the gas in the atmosphere.

As well as being home to about 15% of the planet’s biodiversity, which alone is reason enough to ensure its preservation, the Amazon also plays several key roles in the regional, continental, and even global atmospheric chemistry. “The rainforest is a major source of water vapor not only for the north of Brazil, but also for the central south of the country and the River Plate basin,” says physicist Paulo Artaxo, from the Institute of Physics at the University of São Paulo (IF-USP). “It plays a key role in climate regulation on many scales, even remotely.” To use a metaphor, the Amazon is the earth’s air conditioning system, providing fresh air and humidity—in other words, rain—to itself and other parts of the globe. It is no coincidence that the Amazon and other wet tropical forests are known as rainforests. These regions are covered by dense and lush vegetation because it rains almost continuously, and heavily—with between 2,000 and 4,500 millimeters (mm) of precipitation per year. 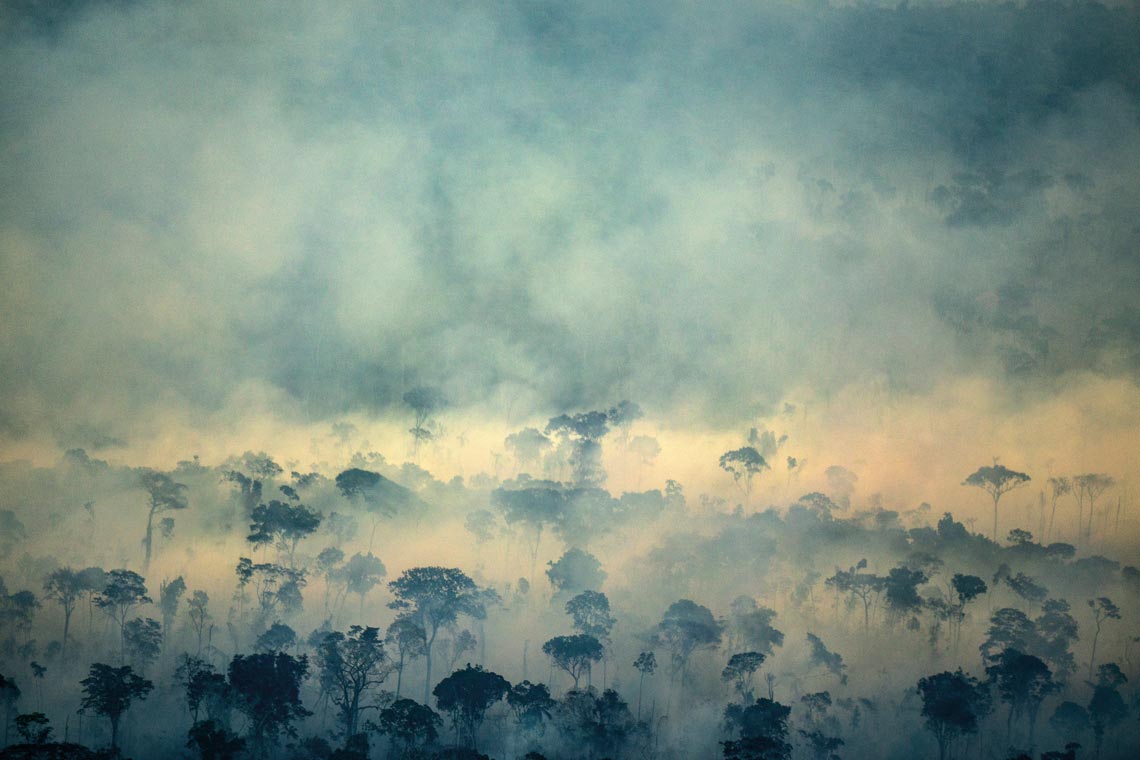 Forest fire in the state of Mato GrossoRogerio Assis

Water vapor arrives across the huge Amazon basin on winds that blow from the tropical Atlantic Ocean towards the mainland. It then falls as rain over the forest. At first, vegetation and soil absorb the water, and then a phenomenon known as evapotranspiration occurs: part of the rain evaporates from the soil, while the plants transpire. As a result, much of the initial moisture is returned to the atmosphere, producing more rainfall over the forest. It is a continuous and highly efficient water cycle. Scientists often remark that the Amazon processes part of its own rainfall. But not all of the water vapor remains trapped in the rainforest’s cycle. Upon returning to the atmosphere, some of this water generates air currents that carry rain to the central south of the continent. These air streams are famously known as flying rivers. They transport some 20 billion tons of water every day, 3 billion tons more than the Amazon River pours into the Atlantic daily.

Deforestation and potential fragmentation of the rainforest could compromise its ability to send water vapor to central Brazil and the south of the continent. “The Amazon is a predominantly flat and continuous area, which in climate models is considered a block, an entity in itself,” explains climatologist José Marengo, head of the Research and Development sector of the Brazilian Center for Natural Disaster Monitoring (CEMADEN), a body overseen by the Ministry of Science, Technology, Innovation, and Communications (MCTIC). “Significant changes to its vegetative cover alter the atmospheric circulation system and could have far-reaching repercussions on rainfall. This could give rise to extreme events, such as decreased precipitation or heavy rainfall over very short periods.” Outside northern Brazil, the humidifying effect of the Amazon is most clearly felt in the southeast of Brazil, the River Plate basin, and the midwest, where agriculture benefits from lower temperatures thanks to mild winds from the rainforest. 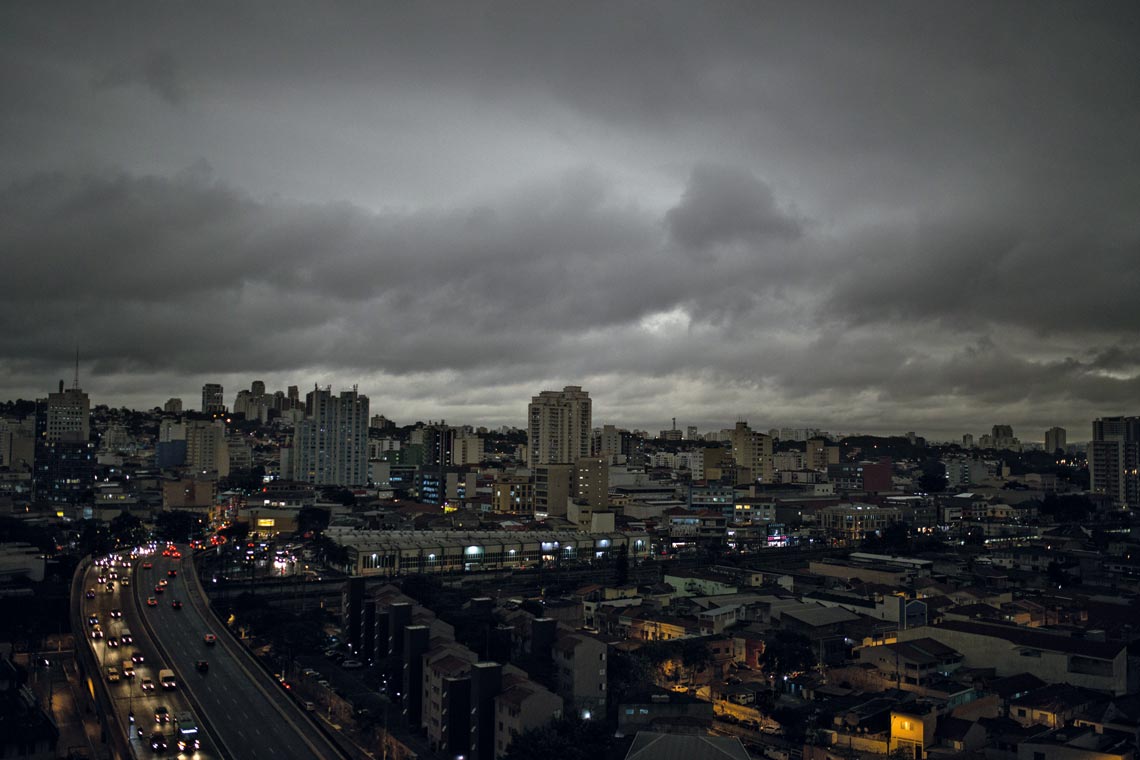 On August 19 of this year, residents in São Paulo were given a stark demonstration of the long-distance connections between the Amazonian atmosphere and the weather in their city. At about 3 p.m. in the afternoon, a winter storm darkened the sky above the metropolis. Day seemingly turning to night during a storm is an intriguing phenomenon, but it is not rare. More unusual was the black rain that fell during the storm. Analyses performed by USP’s Institute of Chemistry found that the rainwater contained polycyclic aromatic hydrocarbons (PAHs), a type of organic compound formed by burning biomass, such as trees. The date of the black rain in São Paulo coincided with a peak in the number of fires burning in the north of Brazil and neighboring countries, which were making front page news around the world that month. The smoke from the fires travelled all the way to the São Paulo State capital, where it mixed into the rain clouds.

In recent years, studies have attempted to measure the impact of the severely shrinking size of rainforests on the climate around the world and the implications for agriculture. An article published in the scientific journal Nature Climate Change in 2015 compiled and analyzed data from more than 20 climate models and scientific articles describing the repercussions of total or partial deforestation of the world’s three major rainforests in Amazonia (the largest), the Congo Basin, and Southeast Asia. The first two form continuous blocks of vegetation, but the Amazon is 70% larger and wetter than the African rainforest, which also suffered major fires this year. Most of Southeast Asia’s rainforests are spread across islands in the region, such as Indonesia and Malaysia. The Amazon is 2.5 times larger than the rainforests in this region. 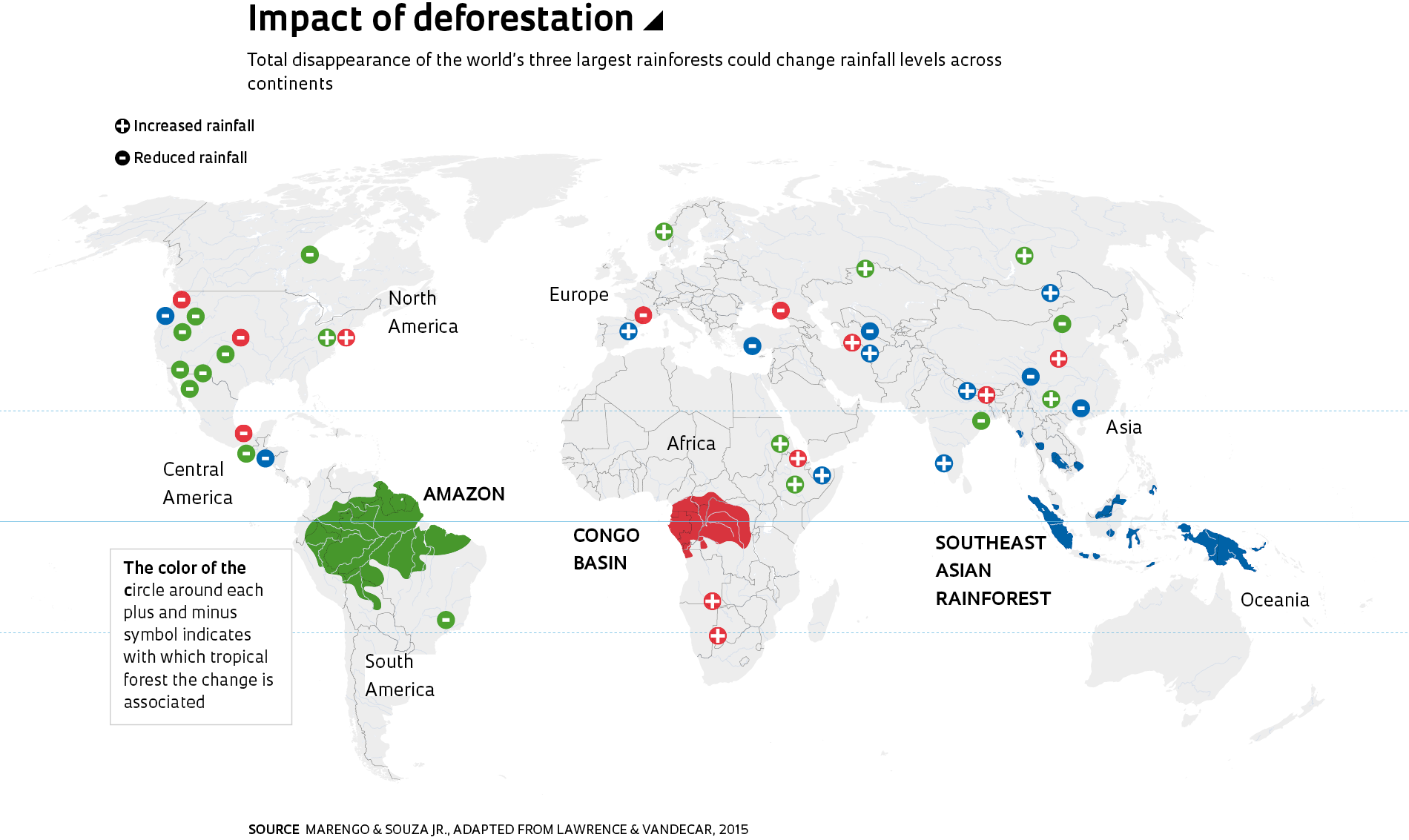 As well as causing local temperature spikes and increasing the number of droughts, complete deforestation of the world’s rainforests would increase the planet’s temperature by 0.7 °C, close to the level of global warming caused by the greenhouse effect since the Industrial Revolution. The greatest consequence of complete deforestation, however, is the effect it would have on rainfall. “Tropical deforestation delivers a double whammy to the climate—and to farmers,” said Deborah Lawrence, an environmental science professor at the University of Virginia and the lead author of the study, in a report. “Removing forests alters moisture and air flow, leading to changes that are just as hazardous and happen right away. The impacts would be felt beyond the tropics. The US Midwest and southern France would get less rainfall, while the UK and Hawaii would get wetter.” The US Midwest region is a major producer of grains such as corn, wheat, barley, and soybeans. As well as grains, southern France produces lots of wine and lavender.

A similar climate modeling study was released in October this year at a meeting at Princeton University, USA, to discuss the importance of the Amazon to the planet. The study, led by ecologist Stephen Pacala and climatologist Elena Shevliakova, both from Princeton, simulated the potential consequences of the entire Amazon rainforest being cleared for livestock farming. On a global scale, the world would be 0.25 °C warmer. In Brazil, rainfall would fall by a quarter and the Amazon itself would be 2.5 ºC warmer. Total disappearance of the tropical forests is an extreme scenario that is highly unlikely to occur, but research like Lawrence’s indicates that deforestation of between 30% and 50% would be enough to cause significant global impacts, as well as turning part of the rainforest into a savanna. 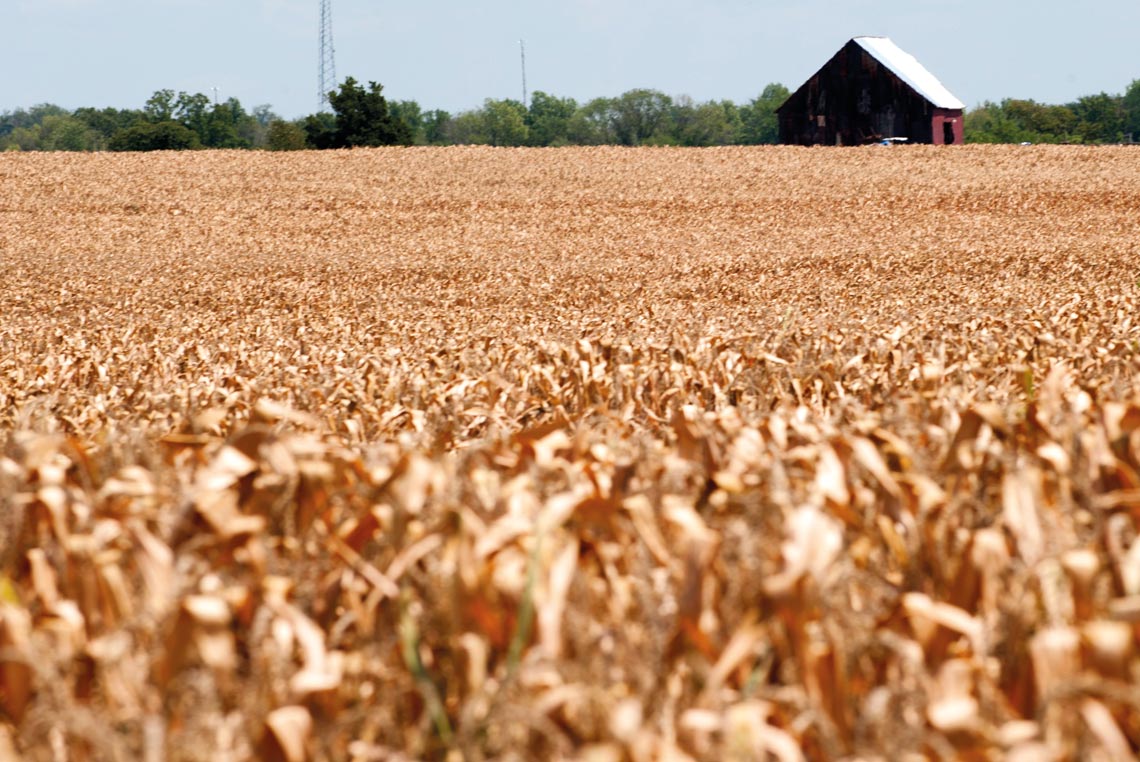 Modeling studies indicate that total deforestation of tropical forests could affect the climate in important agricultural regions worldwide, such as the US Midwest and southern FranceSaul Loeb / AFP / Getty images

The threat to the Amazon comes not only from logging and burning. A recent study suggests that global warming itself is behind a mysterious increase in mortality among certain types of trees in well-preserved areas of enclosed forests, where theoretically, vegetation should be highly resilient. Published last November in the scientific journal Global Change Biology, the study analyzed the diameters of the growth rings of individual trees in 106 forest areas, concluding that those not adapted to stressful conditions, such as prolonged droughts and higher temperatures, are dying more often than the others.

Species that are better able to grow in wet environments are losing ground to those that grow more easily in dry climates. “The trees that are adapted to wet habitats die, leaving small clearings in the middle of the forest that are then filled by faster-growing species, such as the cecropia,” explains Brazilian ecologist and lead author of the study Adriane Esquivel-Muelbert, from the University of Leeds, UK. “Global warming is changing the biodiversity of the species that make up the forest.” These areas of the Amazon have been monitored for 30 years by researchers from Brazil and abroad as part of the Amazon Forest Inventory Network (RAINFOR) project. The problem with this replacement process is that while the new dominant species grow very quickly, they have a short life span and absorb less carbon from the atmosphere, which is one of the most important roles of the Amazon, along with its ability to spread water vapor.