The trauma of sexual violence

Rape is one of the most violent and abject crimes imaginable. It subjects the victim to such a high degree of stress that it results in well-known deep psychological scars, as well as causing physiological impacts. These are the findings of a recent study by a UNIFESP team that combines outpatient care for girls and... View Article

Promises in the wind

Electronic cigarettes originally hit the market with the promise of helping smokers kick their tobacco addictions. But the wide range of aromas and types—as to be expected with gadgets targeted at young people—is not suggestive of a treatment method, just as the colorful and flashy stores in countries where they are sold do not bring... View Article

This issue’s letter from the editor, which usually features on page 7, has been moved to page 71, requiring a somewhat different approach. If the primary objective is to present the issue, what should be said when linear readers are already two-thirds of the way through the magazine? The Pesquisa FAPESP team meets on a... View Article

Reflecting systematically on research responsibility is a recent phenomenon in terms of the history of science. It was only at the end of the twentieth century that organized efforts to understand the problem of scientific misconduct began, focusing mainly on plagiarism, fraud, and unethical conduct in experiments on human beings, as well as on how... View Article

Agency in the broadest sense

This May 23, FAPESP celebrates its 60th anniversary. Established in the São Paulo State Constitution of 1947, the São Paulo Research Foundation was founded in October 1960 and began operating a year and a half later. The pioneering institution is the largest state science and research agency in Brazil, serving as a national and international... View Article 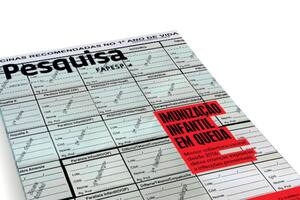 After a slow start, Brazil is now one of the top 10 countries with regard to the percentage of the population vaccinated against COVID-19. The country’s National Immunization Program (PNI), managed by the public health system (SUS), offers 29 vaccines as routine, at no cost to the public. The PNI has been so successful that... View Article

The knowledge gained from scientific research can improve the quality of life of individuals and social groups, but it is not always effectively or quickly adopted—more so with procedures and methods than equipment and drugs. There are many obstacles, including ignorance, habit, lack of training, absence of rules, and cultural resistance. The problem can occur... View Article

Brazilian rapper Emicida recorded a show at the Municipal Theater of São Paulo for the documentary AmarElo – É tudo para ontem (“It’s all for yesterday”). The musician chose the theater—where a 1922 exhibition known as Modern Art Week demanded greater Brazilian contribution to art—as his stage to talk about Afro-Brazilians who have played a... View Article

Brazil is known for producing more clean energy than the average country. In 2019, 46% of its electricity came from low-carbon sources, compared to 16% worldwide (and 26% in Europe). The majority of this renewable, nonpolluting energy is produced by more than 200 hydroelectric power plants that generate two-thirds of the electricity consumed nationwide. The... View Article

It has long been known that local soil and climate characteristics, combined with cultivation and manufacturing techniques, result in unique attributes for certain agricultural or food products. There are records of this dating back to the fifth century BC, such as references to wine from the Greek island of Chios, considered a luxury item in... View Article

The idea of using criteria for spaces on higher education courses based on anything other than performance may seem incompatible with scientific work. Conceptually, science has no color, gender, age, or any other characteristic, but it is a social activity, and we live in an unequal society. Thinking of ways to ensure equal access to... View Article

Unequivocal. That is how the sixth report by the UN’s Intergovernmental Panel on Climate Change (IPCC) described humanity’s influence on the warming of the atmosphere, ocean, and land. The first part of the latest report summarizes 14,000 recent scientific studies on the issue. There was nothing incidental about the choice of words: the IPCC precisely... View Article

The eastern Amazon is no longer a carbon dioxide sink and is now a source of this greenhouse gas, according to a recently published study. Confirming previous, less comprehensive data, the research sought to measure the carbon balance in areas of the Amazon suffering varying levels of deforestation, wild fires, and climate change. The results... View Article

Every 10 years, IBGE researchers visit every household in Brazil to carry out the national census, collecting demographic and socioeconomic data on the country’s inhabitants. Brazil’s first census took place almost 150 years ago, at a time when one of the questions was whether the individual was free or enslaved. It is the main source... View Article

On January 15, 1951, Brazilian President Eurico Dutra passed Law 1310, establishing what was at the time called the National Research Council (CNPq). The law’s first article outlined the council’s purpose: “to foster and stimulate the development of scientific and technological research in all fields of knowledge.” Almost six months later, on July 11, CAPES... View Article

Education is not a privilege

One of the lasting impacts of the novel coronavirus pandemic relates to an essential area for all nations: education, which is fundamental to the future of developing countries like Brazil. In addition to the already high number of 1.3 million children and teenagers not enrolled in education in Brazil, a further 4 million students have... View Article

Viruses are simple but sophisticated organisms. They have no efficient mechanism for correcting genetic errors that occur during replication, meaning that changes to their genome are incorporated into future generations. These mutations can be harmless, or they can make the virus more efficient—which is all the more undesirable when humans are the hosts. A year... View Article

Illegal fossil extraction is poorly reported and a more common problem than you would think. Developing nations whose soils are rich in prehistoric records often suffer from limitations such as insufficient security and oversight, leading to increased smuggling of valuable artifacts, which frequently end up in the hands of private collectors or even in museums.... View Article

With the second most COVID-19 deaths in the world, Brazil has already surpassed 200,000 victims of the disease. The figure could be much lower if preventive measures proven to be effective were more widely followed, such as social distancing, the use of masks, and strict hygiene practices. It is equally undeniable that the number could... View Article

Surgeon Angelita Habr-Gama has dedicated her career to developing treatment strategies that aim to prevent rectal cancer patients from needing to have the organ removed. The results of research carried out by her group since the 1990s were published last month, showing that patients need not undergo a proctocolectomy if the tumor regresses completely after... View Article

In February of this year, when we were putting together the March issue, the first official record of SARS-CoV-2 infection in Brazil was confirmed. We had no idea what the future might bring. Our first article on the topic, “The Novel Coronavirus in Brazil,” reported on the disease’s arrival and described the other types of... View Article

The idea that children are individuals who deserve the same rights as adults, as well as other specific rights based on their inherent vulnerability, is a recent one. Previously seen as belonging to the family or the State, the notion that they deserve particular attention grew in popularity as we learned more about childhood development,... View Article

The plague and the pain

It is no surprise that pandemics have a significant impact on the population’s mental health. The fear of contagion and death, the immediate impact of an economic downturn, the stress of confinement, the burden of having to take on  tasks that used to be shared by multiple people, and worrying about the future have all... View Article

The challenge of immunization

Less than four months after China notified the WHO that it had identified a cluster of pneumonia cases “of unknown cause,” potential vaccines for the novel coronavirus had already begun human testing. One of the first companies to start phase 1 clinical trials (in humans) was Chinese biopharmaceutical firm Sinovac Biotech, with which the Butantan... View Article

Little is known about viruses. Existing on the boundary between the living and the nonliving, they are found in all environments where there is life. Their effects on living beings can be beneficial, harmless, or capable of triggering devastating epidemics, such as Ebola, Zika, and now, SARS-CoV-2. Although the number of species is estimated in... View Article

Journalism during a pandemic

On March 20, the Pesquisa FAPESP offices closed and the team began working remotely. The April issue was completed in the midst of a rush to establish new working processes involving videoconferences, content-sharing platforms, and cloud storage. The May edition, meanwhile, was planned and executed from a distance, with only the journal’s photographer, Léo Ramos... View Article

A challenge for science

In May 1919, when the H1N1 pandemic known as the Spanish flu was slowing down, the journal Science published an article titled “The Lessons of the Pandemic.” In the article, American sanitation engineer and epidemiologist George A. Soper wrote: “The most astonishing thing about the pandemic was the complete mystery which surrounded it. Nobody seemed... View Article

Modern science and its remarkable advances are closely associated with the ideas and research of men. Although this perception is not entirely accurate, it is also not incorrect. Like all human activity, science is a part of our current social structure, which is undoubtedly based on a male perspective. Londa Schiebinger, a professor of the... View Article

LETTER FROM THE EDITOR

n 1963, a report by the Royal Society on the emigration of scientists sparked a public debate over so-called brain drain. Half a century later, international mobility among scientists is still an object of debate fueled by reports and studies. Initially restricted to people with a background in science and technology, the term currently covers... View Article

In 1872, the year of the first Brazilian census, almost the entire population of the country defined themselves as Catholic (99.7%). One hundred years later, the proportion had changed, but only slightly, to 91.8% in 1970. Since then, official statistics show, the decline has accelerated: in 1991, the total was 83.3%, and in 2010 it... View Article