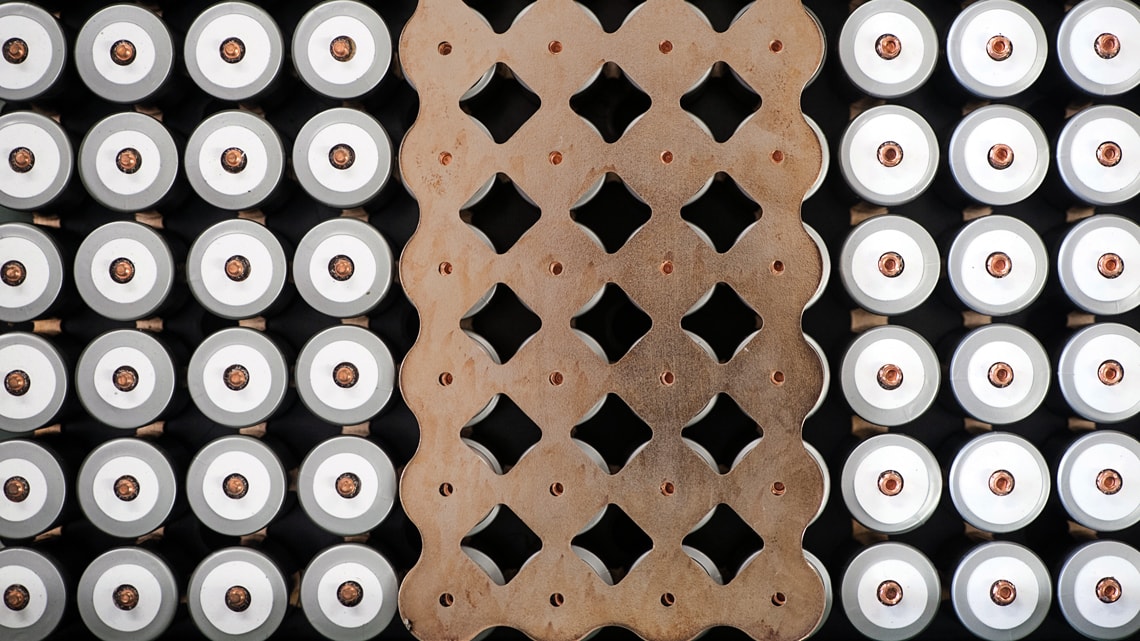 Brazil is soon to join the ranks of countries producing batteries for electric mobility, a segment led by China, the US, Japan, and South Korea. At least four battery-production joint ventures have recently been established in the country, all involving local players working with a foreign partner. In most arrangements the battery technology has been or is being developed by the international partner. In 2018, Companhia de Desenvolvimento de Minas Gerais (CODEMGE) concluded an agreement with British-based Oxis Energy to establish the world’s first manufacturing plant for the mass production of lithium-sulfur (Li-S) battery cells. The technology, according to Oxis, is superior in performance and safety to lithium-ion batteries, currently the dominant battery technology in the electric vehicle market. Brazilian battery manufacturer Moura, fuel-cell producer Electrocell, and a consortium formed by Companhia Brasileira de Metalurgia e Mineração (CBMM) and Japanese Toshiba, also plan to establish a presence in the segment.

Oxis Brasil, the joint venture formed by CODEMGE and Oxis Energy, will initially target the heavy vehicle segment—including trucks and buses—and the defense and aerospace industries, across applications such as drones, satellites, and Vertical Take Off and Landing (eVTOL) aircraft. The plant will be built in Belo Horizonte, in Brazil’s southeastern state of Minas Gerais, in a total investment of US$56 million. The facility is expected to begin operation in 2022, initially producing 300,000 cells per year before ramping up production the next year to 1.2 million units, or half its final target capacity. The factory is being developed to accommodate future expansion to 4.8 million cells per year. 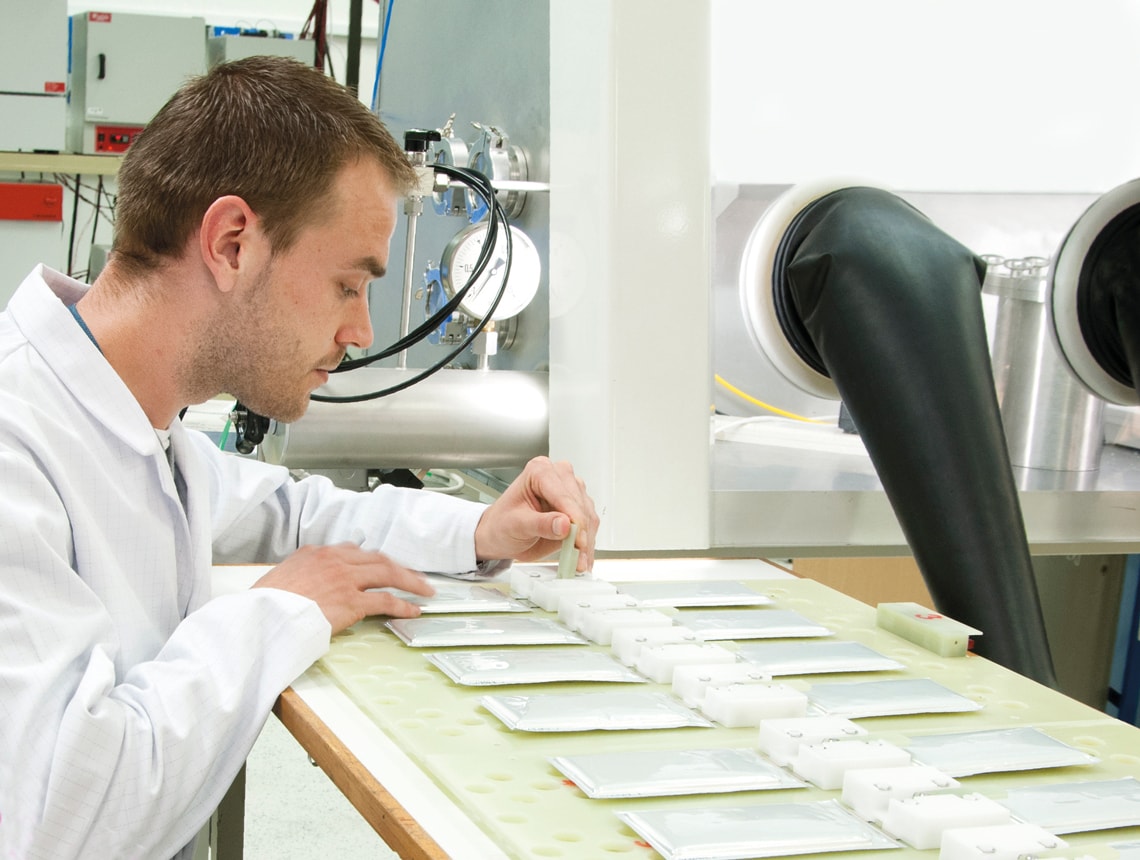 Oxis Energy’s laboratory in England, where its lithium-sulfur battery technology was developedOxis Energy

A vehicle battery is an assembly of smaller batteries, called cells, that are integrated into a package and managed by a Battery Management System (BMS). Application-specific packages are designed by connecting cells in series and parallel. A bus battery, for example, requires approximately 10,000 cells. Rodrigo Mesquita, business development manager at CODEMGE, says the new plant will produce cells but not batteries proper—this final stage will be handled by companies dedicated to cell integration with Battery Management Systems (BMS).

“We are currently in the process of selecting integration partners. We hope to attract several to Brazil,” he says. Battery integrators need to be acceptable to and selected by future buyers. Among the OEMS that have expressed interest in sourcing batteries from the new plant are Brazilian aircraft manufacturer Embraer, Boeing, Lockheed Martin, Airbus, Mercedes-Benz, and Porsche.

The joint venture’s lithium-sulfur battery technology has been developed by its UK partner, Oxis Energy. CODEMGE, through its investment fund Aerotec, last year invested R$18.6 million in a 12% stake in Oxis Energy and intends for the production facility in Brazil to provide downstream integration for its lithium supply chain in Minas Gerais. Vale do Jequitinhonha, in the state’s northeast region, has the potential to become a globally leading producer of the mineral.

Oxis Brasil will be the world’s first plant to produce lithium-sulfur batteries at commercial scale. Several other research centers around the world are now also vested in the new technology. In Japan, Sony is looking to harness lithium-sulfur chemistry in the production of smart phone batteries, while US-based Sion Power Corporation is developing batteries with the technology for automotive applications. ALISE, a European consortium of 16 companies, including Oxis Energy, is developing new materials and insight into the electrochemical chemistry involved in lithium-sulfur technology.

Brazil produced only 600 metric tons (mt) of lithium in 2018, accounting for about 0.7% of the global market. The country’s entire output of the mineral was mined by Companhia Brasileira de Lítio (CBL), a company co-owned by CODEMGE. The Geological Survey of Brazil has estimated reserves in Vale do Jequitinhonha to represent 8% of global reserves, or about 14 million mt. Australia and Chile are currently the world’s leading producers, at respectively 51,000 mt and 16,000 mt per year. 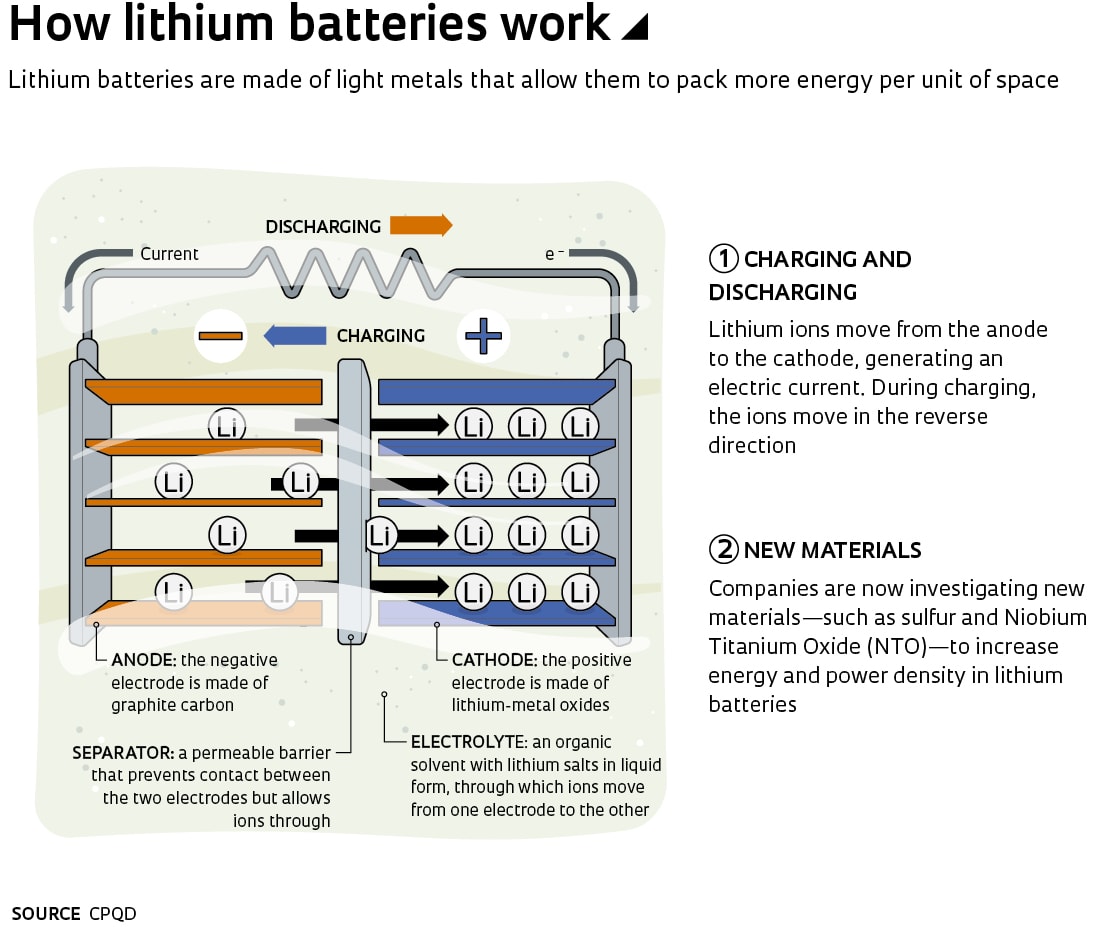 Lithium is a lightweight metal that provides high energy density—it can concentrate more energy per unit volume than the nickel-cadmium batteries used in early mobile phones and laptop computers, or the conventional lead-acid batteries used to start internal combustion vehicles. Most lithium-ion batteries consist of an anode (negative electrode) made of graphite carbon and a cathode (positive electrode) made of lithium oxide and a combination of metals including nickel, manganese, and cobalt. The electrolyte (the medium through which ions move between electrodes) is a mixture of organic solvents and lithium salts.

Valdirene Peressinotto, head of research, development, and innovation (RD&I) at CODEMGE, explains that because of the substances involved and the production process, this combination of materials can create a fire and explosion hazard when exposed to stressors such as warming above 45 ºC, a short circuit, or punctures—as might occur in a vehicle collision. Oxis Energy’s battery solution uses anodes made of lithium metal in replacement of graphite carbon, and cathodes made of a combination of sulfur and carbon. The company has developed its own proprietary technology for both the cathode and the electrolyte solution. These new batteries have been shown by testing to be safe at temperatures ranging from minus 60 ºC to 80 ºC, and will not explode when punctured or shorted.

CBMM, based in Araxá, southeastern Brazil, is the world’s largest producer of niobium. In 2018 it partnered with Toshiba Corporation to develop new lithium battery technology. Toshiba’s R&D department plans to replace the carbon anode with a titanium-niobium composite oxide (NTO) while maintaining a traditional cathode made of lithium alloy and metal. Rogério Marques Ribas, head of the battery division at CBMM, says that NTO will not react to lithium and generate structural stress, such as a 13% increase in volume when charging, the way carbon anodes do. “This allows for more power and faster charging times,” he says.

In a comparison of two batteries with the same charge, the lithium-ion version takes four hours to charge, while its NTO counterpart needs just 10 minutes for a full recharge. NTO batteries also have a lifespan of over 15 years in automotive applications, while the best-performing lithium-ion batteries last around 10 years. Another advantage is that NTO anodes are safer when exposed to heat or perforation stress.

Under the partnership agreement between CBMM and Toshiba, each side will invest US$7.2 million in a pilot plant being built in Yokohama, Japan, where the first units are expected to be produced for testing within two years. “We hope to secure OEM approval of the technology in 2021, which will give us the green light for construction of an industrial-scale production line,” says Ribas. Another project exploring applications for niobium in batteries is being developed at Wildcat Discovery Technologies in San Diego, California, he says. CBMM is also a partner in the venture, which will employ niobium in making cathodes. The project is still at an early stage of development.

The current drive to improve battery performance for automotive applications is the leading edge of a global effort that began several decades ago. The Royal Swedish Academy of Sciences in October awarded the 2019 Nobel Prize in Chemistry to American mathematician and physicist John Bannister Goodenough, British chemist M. Stanley Whittingham, and Japanese chemist Akira Yoshino for research they conducted in the 1970s and 1980s that paved the way for the development and commercial production of modern lithium-ion batteries .

According to a report by the International Energy Agency (IEA) titled Global EV Outlook 2019, the most significant recent developments in the industry involve changes in battery chemistry, such as cathodes made of lithium metal oxides with a metal ratio of 80% nickel, 10% manganese, and 10% cobalt, compared with a current ratio with an equal portion of each metal.

Cathodes made of lithium-nickel-cobalt-aluminum oxides, used for smaller-sized batteries, are another research front. For anode applications, silicon-graphite composites have attracted the greatest research interest. The automotive industry expects to see significant progress in improving energy density and reducing costs by 2025.

The global stock of pure and hybrid electric cars exceeded 5.1 million units in 2018, while the stock of electric buses reached 460,000 units, according to the IEA report. Predictions for 2030 indicate the electric vehicle fleet will range from 130 million to 250 million units, depending on the scenario. In Brazil, the number of electric and hybrid vehicles reached 10,600 units in 2018, according to data from the Brazilian Association of Automotive Vehicle Manufacturers (ANFAVEA). While no projections have been made for the Brazilian market, the expected expansion of the domestic fleet has led companies to initiate production of lithium-ion batteries locally. 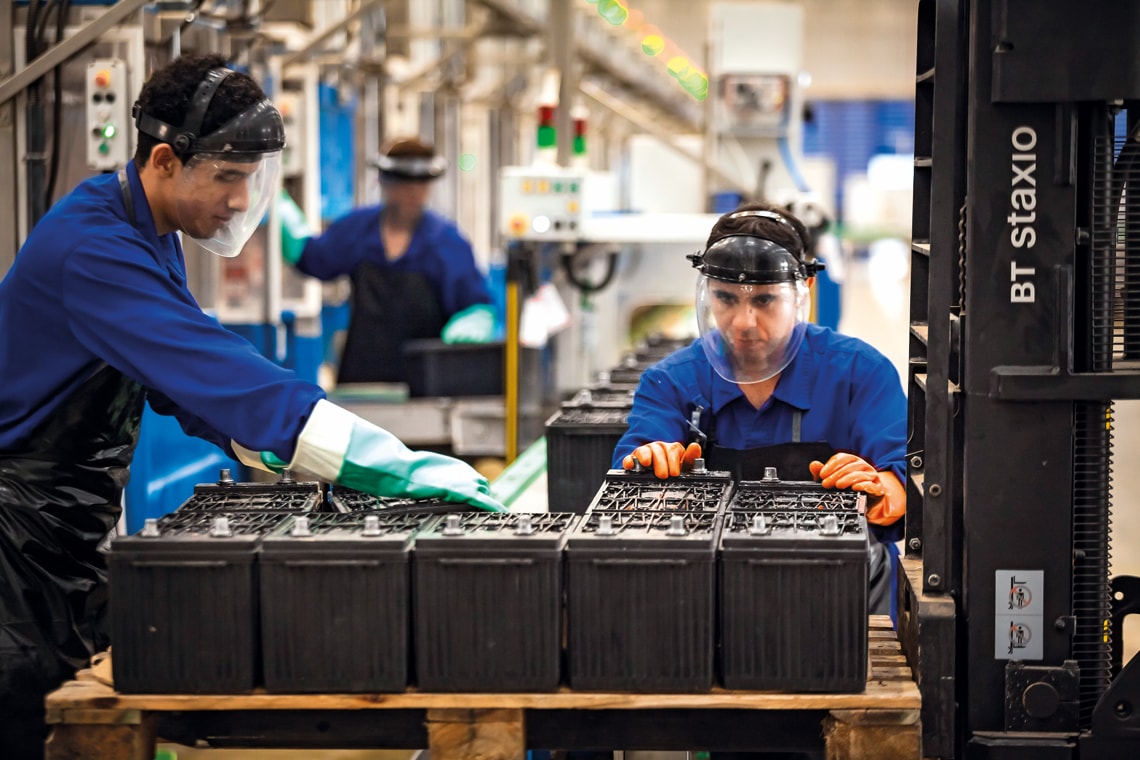 Moura Group, a leading local manufacturer of lead-acid car batteries, has established a lithium battery R&D center at its headquarters site in Belo Jardim, Pernambuco State. The company’s first lithium battery, designed for forklift trucks, will be launched on the market within 2019. The company has also established a partnership with US-based Xalt Energy to produce batteries for heavy vehicles, initially to serve the bus market in Brazil. A contract has recently been signed to supply batteries to São Paulo bus manufacturer Eletra.

Fernando Castelão, director of Moura’s lithium division, says the company will adapt Xalt’s battery technology for the severe operating conditions in Brazil. The batteries will be produced at a new manufacturing facility opened in 2018. Lithium-ion batteries require special safety measures to ensure they are properly sealed and protected from contact with water, explains Castelão. They also need cooling systems so they are kept within a safe temperature range. “Vehicles in Brazil are exposed to different weather conditions than vehicles operating in the northern hemisphere,” says the executive.

Electrocell, a company housed at the Center for Innovation, Entrepreneurship, and Technology (CIETEC) at the University of São Paulo (USP), has been developing lithium-ion automotive battery technology since 2007 as a spinoff from a fuel-cell project supported by FAPESP’s PIPE program. The company has established a partnership with Brasil VE Superleves, a manufacturer of super-compact battery electric vehicles hosted at the Anhanguera Business Park in Cajamar, São Paulo State, which is due to start production in December. The facility will produce between 40 and 200 units per month, including 2- and 4-seater passenger vehicles, minitrucks, and 12- and 24-seat buses.

Electrocell director Gerhard Ett, a chemical engineer specializing in the manufacture of lithium batteries in Germany, says the company will initially import battery cells and integrate them into lithium batteries in Brazil. The first shipment of battery cells will come from Germany, but the company also has prospective suppliers in China, the US, and South Korea. “We ultimately plan to produce battery cells locally. We already have the necessary expertise and knowledge of the manufacturing process. We just need to build enough scale to start production,” says Ett, who is also a professor at the FEI University Center in São Bernardo do Campo (SP).

Mechanical engineer Paulo Henrique de Mello Sant’Ana, of the Center for Engineering, Modeling, and Applied Social Sciences at the Federal University of ABC (CECS-UFABC), says that battery production capabilities will be strategic in a future of electric mobility. It is crucial that Brazil engage in early development of battery technology rather than only buying finished products. “While it’s still too early to say whether initiatives such as the CBMM-Toshiba or CODEMGE-Oxis joint ventures will be economically viable and successful at improving lithium battery performance, it is certainly good news that Brazilian players are now involved in the development process,” he says.