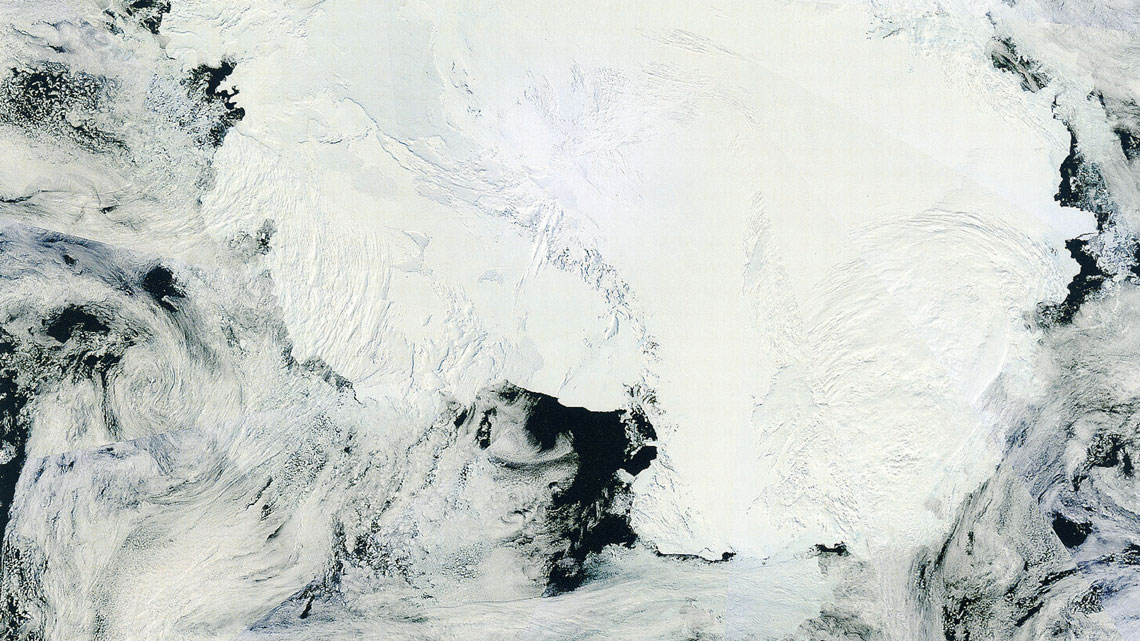 Covered in ice, the most southern continent is nearly twice the size of Brazil

In Antarctica, science and politics merge like ice. Russian, British, and American explorers first saw the immense southern mass of ice in the same year: 1820. Nearly a century later, the territorial dispute started: in 1908, the United Kingdom was the first country to claim a part of the untouched territory. During the following years, New Zealand, France, Australia, Norway, Argentina, and Chile all announced that they also wanted parts of the area, which could contain mineral wealth. In the 1930s and 1940s, Argentina, Germany, the United States, and Norway organized major scientific expeditions, which also served to map the wealth of the sea that surrounded the region—including species such as whales, which were nearly wiped out by the mid-twentieth century.

“Scientists used political and economic interest in the region to undertake expeditions and do research, while politicians used science to legitimize their territorial interventions in Antarctica,” noted Argentine political scientist Ignacio Cardone, a researcher at the Center for Research in International Relations (NUPRI) at the School of Philosophy, Languages and Literature, and Human Sciences (FFLCH) of the University of São Paulo (USP), during a debate held in November 2019 at the USP Institute of International Relations (IRI). “Territorial disputes have not been resolved, but they have been suspended.” 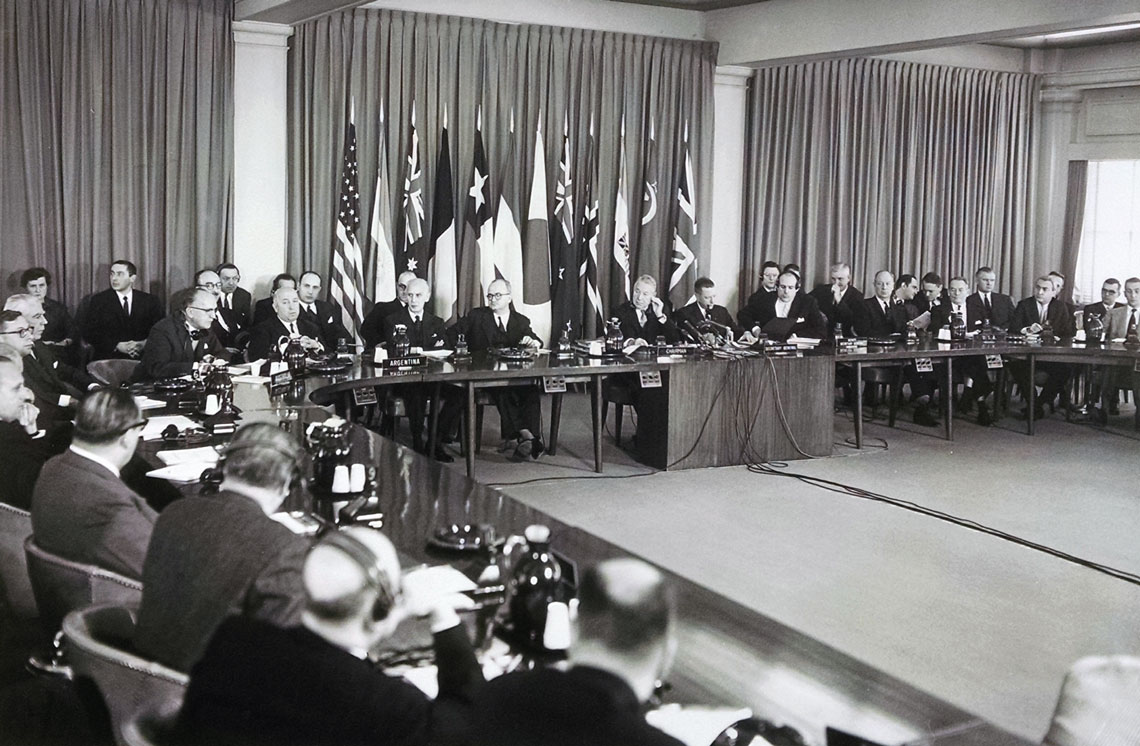 After several failed initiatives to settle the occupation of the frozen continent, representatives from 12 countries signed the Antarctic Treaty on December 1, 1959 in Washington, United States. The agreement has restrained unilateral actions. One of its articles froze all territorial claims; the countries that had already made them would not give them up, but could not implement them, and those that had not, could not make them. The continent would remain open to any country. Boosted by the International Geophysical Year of 1957–1958, the treaty established that the region be used only for peaceful purposes, ensured free scientific research, and prevented the Cold War between the United States and the former Soviet Union from reaching the far south of the planet.

Effective since 1961, the treaty promoted other agreements—one of them was a 1991 protocol, effective since 1998, which defined environmental protection rules for any activity and forbade the exploitation of mineral resources in Antarctica. Currently, it includes 54 countries. The most recent country to be included was the Czech Republic, in 2014. The majority (37%) of members are from Europe and six are from South America: Argentina and Chile, which were part of the initial group of 12, Ecuador, Peru, and Uruguay—as well as Brazil. The latter signed the treaty in 1975 and then, in 1983, was accepted as an advisory member, with the right to vote at annual meetings. 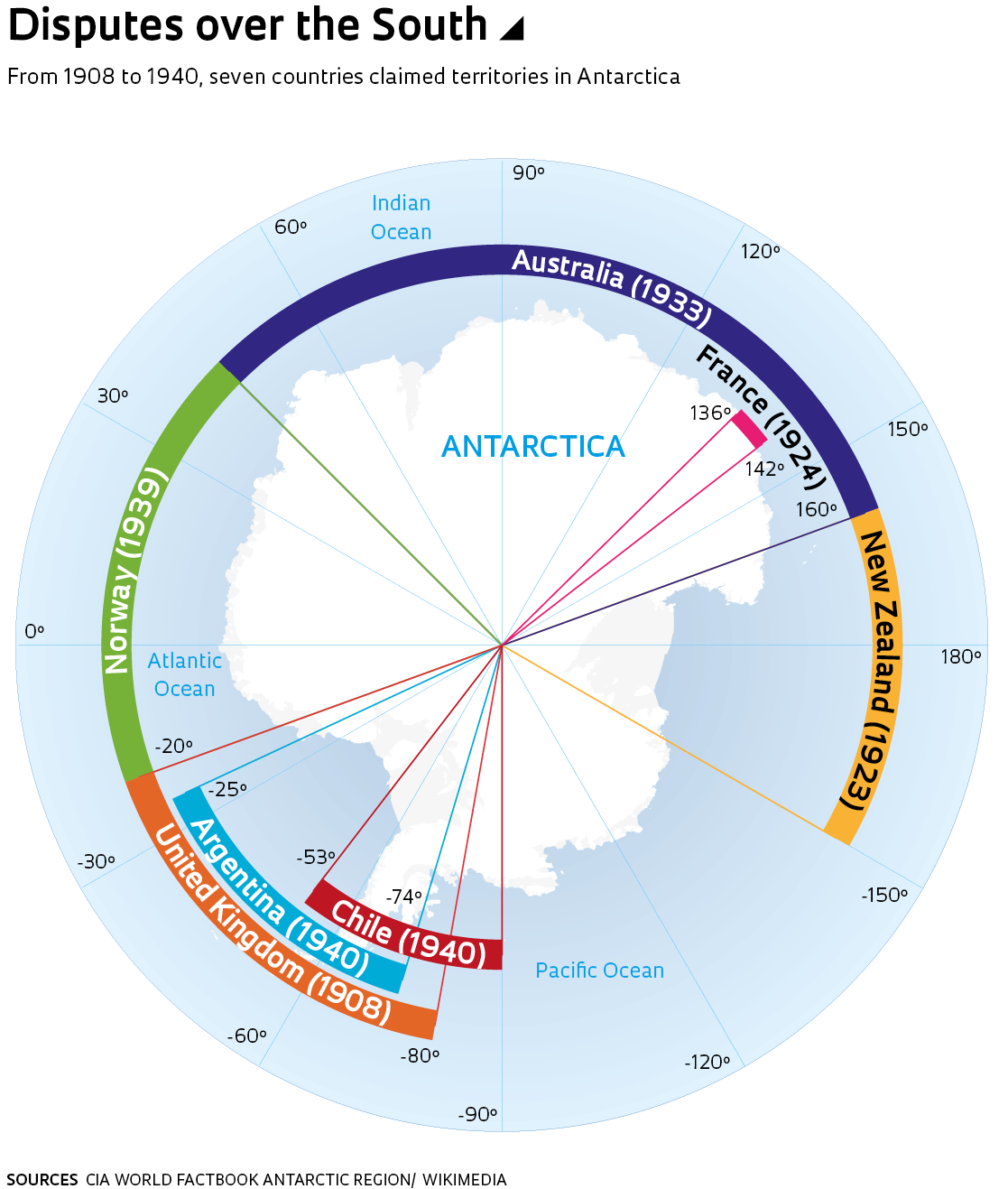 “Decisions for the treaty advance as long as no one disagrees,” shares Brazilian sociologist Daniela Portella Sampaio, a researcher at the University of Leeds, United Kingdom. After interviewing 70 researchers and representatives from governmental organizations linked to the treaty in 2018 and 2019, she was able to identify what is expected from scientific research: “The participants recognized that consensus is still the best way to make decisions, although they are frustrated that conservation plans for the protection of marine areas have not been implemented.”

With an area of 13.4 million square kilometers (km2)—greater than that of Europe (10 million km2) and nearly twice that of Brazil (8.5 million km2)—Antarctica is home to 75 scientific bases from 32 countries. 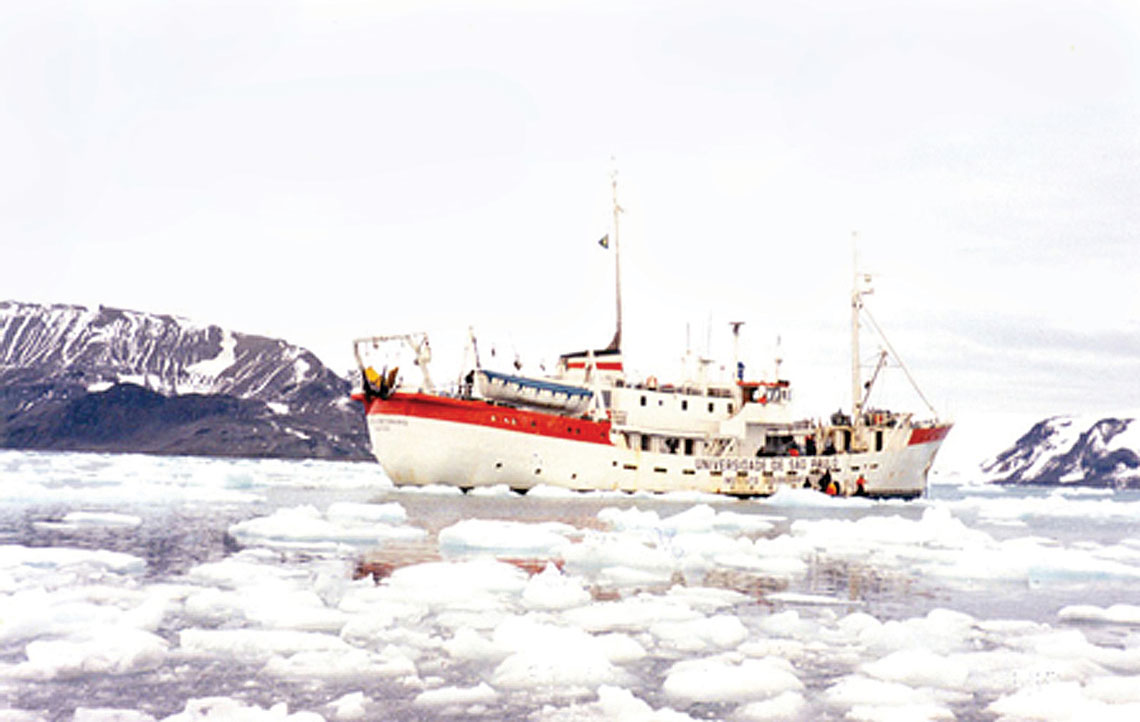 The ship Prof. Besnard, from USP, on her first expedition to Antarctica, in 1983IO-USP Collection / Reproduction by Lourival Pereira De Souza

Science unifies countries through collaborative research, but tensions persist: tourism into central Antarctica is increasing, the Chinese fishing fleet in the Southern Ocean is expanding, and the pressure for mineral exploration continues. “The continent is still a place of geopolitical disputes,” reiterated Leonardo Faria de Mattos, Navy captain of the sea and war and professor at the College of Naval Warfare, during the USP debate.

Mattos recalled that, in 1956, the United States opened a research base at the Geographic South Pole; a year later Russia did the same at the so-called Pole of Inaccessibility, with winter temperatures of -89 ºC, close to the Geomagnetic South Pole. China signed the treaty two years after Brazil and, in 2009, installed the highest station in Antarctica, at 4,087 meters above sea level. China is currently building their fifth research station, to be inaugurated in 2022, in addition to having put into operation, in July 2019, the first icebreaker research ship built in the country: the Xue Long 2. 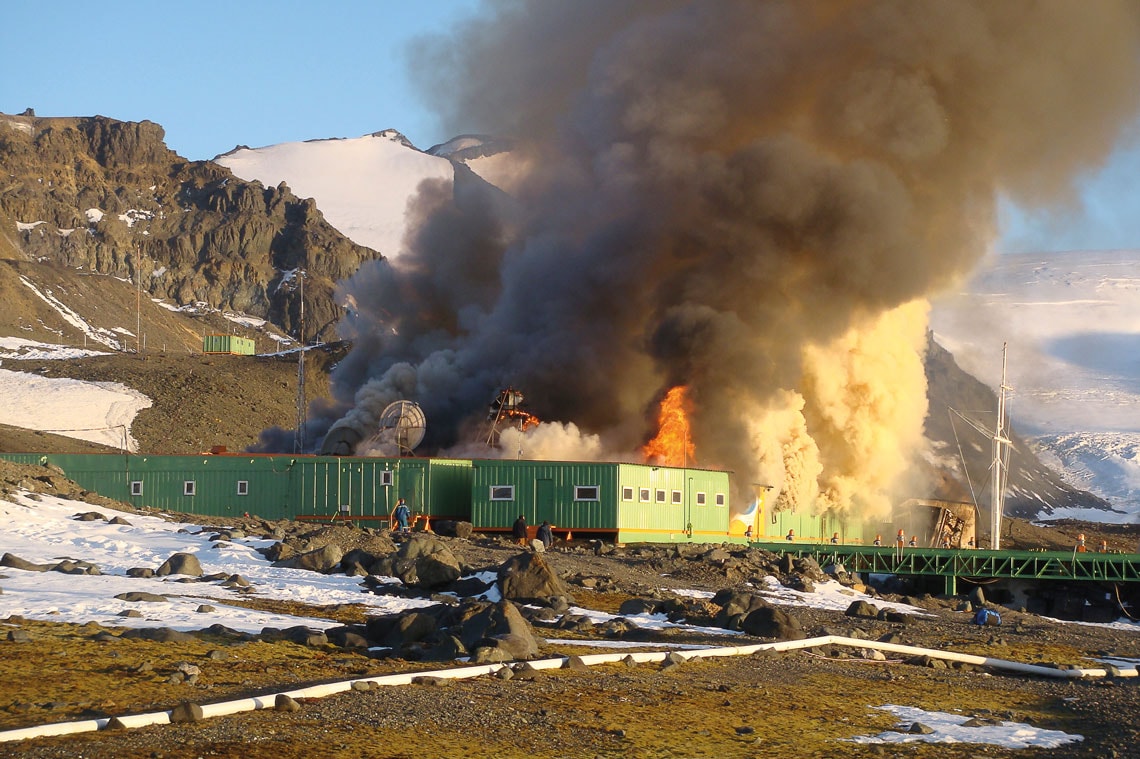 Brazilians in Antarctica
In March 1958, nearly two years before the treaty was signed, the first Brazilian arrived in Antarctica: Pernambuco doctor and journalist Durval Sarmento da Rosa Borges (1912–1999), who was also a professor at the USP School of Hygiene and Public Health. Departing from New Zealand, he was accompanying a group of North American researchers. The Rio de Janeiro newspaper Correio da Manhã began publishing his travel reports two days later, on March 13, with titles such as “Where today all is icy cold, there were green meadows millennia ago.” Borges also published writings about his travels in the journal Visão, for which he wrote about medicine, and then put together a book called Um brasileiro na Antártida (A Brazilian in Antarctica), published in May 1959 by the Brazilian Geographic Society.

Also aboard a North American ship, USP meteorologist and professor Rubens Junqueira Villela was the first Brazilian scientist to reach the frozen continent, in March 1961. He was part of the first official Brazilian scientific mission in 1982, with the ships Barão de Teffé and Prof. Besnard, which facilitated Brazil’s entry into the Antarctic Treaty. In 1984, the Comandante Ferraz Antarctic Station (EACF) became operational; it will be reopened in January 2020, rebuilt after a fire that took place on February 25, 2012.

“We need to think about building the second Brazilian station,” points out Mattos, of the Navy. “China and India already have bases even in the Arctic, while Brazil has not even adhered to the 1920 Svalbard Treaty, which allows the installation of research stations in the Norwegian archipelago.” 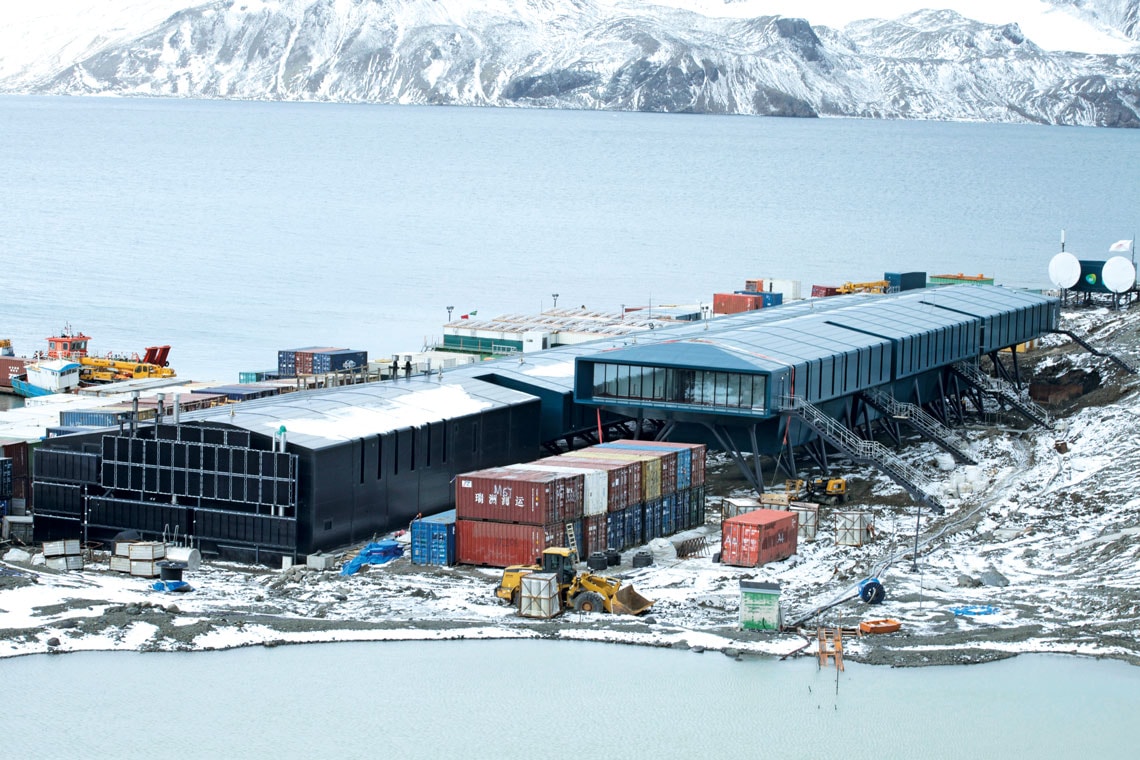 The new one, scheduled to open in 2020Alan Arrais / NBR / Agência Brasil

In this year of 2020, the development of the strategic plan for Brazilian scientific research for the period 2023–2030 is expected, with the help of researchers from the Federal Universities of Rio Grande do Sul (UFRGS) and Rio de Janeiro (UFRJ), and from USP. “One of Brazil’s challenges is restructuring POLANTAR [National Policy for Antarctic Affairs], whose vision is stuck in the 1980s,” noted glaciologist Jefferson Cardia Simões, a professor at UFRGS and general coordinator of the National Institute of Science and Technology of Cryosphere. He is vice president of the Scientific Committee on Antarctic Research (SCAR), created in 1958 to coordinate activities in Antarctica for the International Geophysical Year and which has become an advisory body to the treaty.

“Until the 1990s,” shared Simões at the USP meeting, “the priorities for the countries were the mapping of natural resources and the political-military advantages, but nowadays, it is the quality of the science it produces that determines a country’s status in the treaty.” He states that Brazilian scientists have been a part of international research networks on biodiversity and for the monitoring of the ozone layer, radiation, atmosphere, the ice, and their implications for the regional and global climate.

In early December 2019, Simões left with his team on another trip to Antarctica. This time, the goal is to put Criosfera 1—an automatic Brazilian scientific module for collecting meteorological data—back into operation. Installed in December 2011 at 670 kilometers (km) from the Geographic South Pole and 2,500 km from the EACF, it was closed for two years due to lack of maintenance resources.