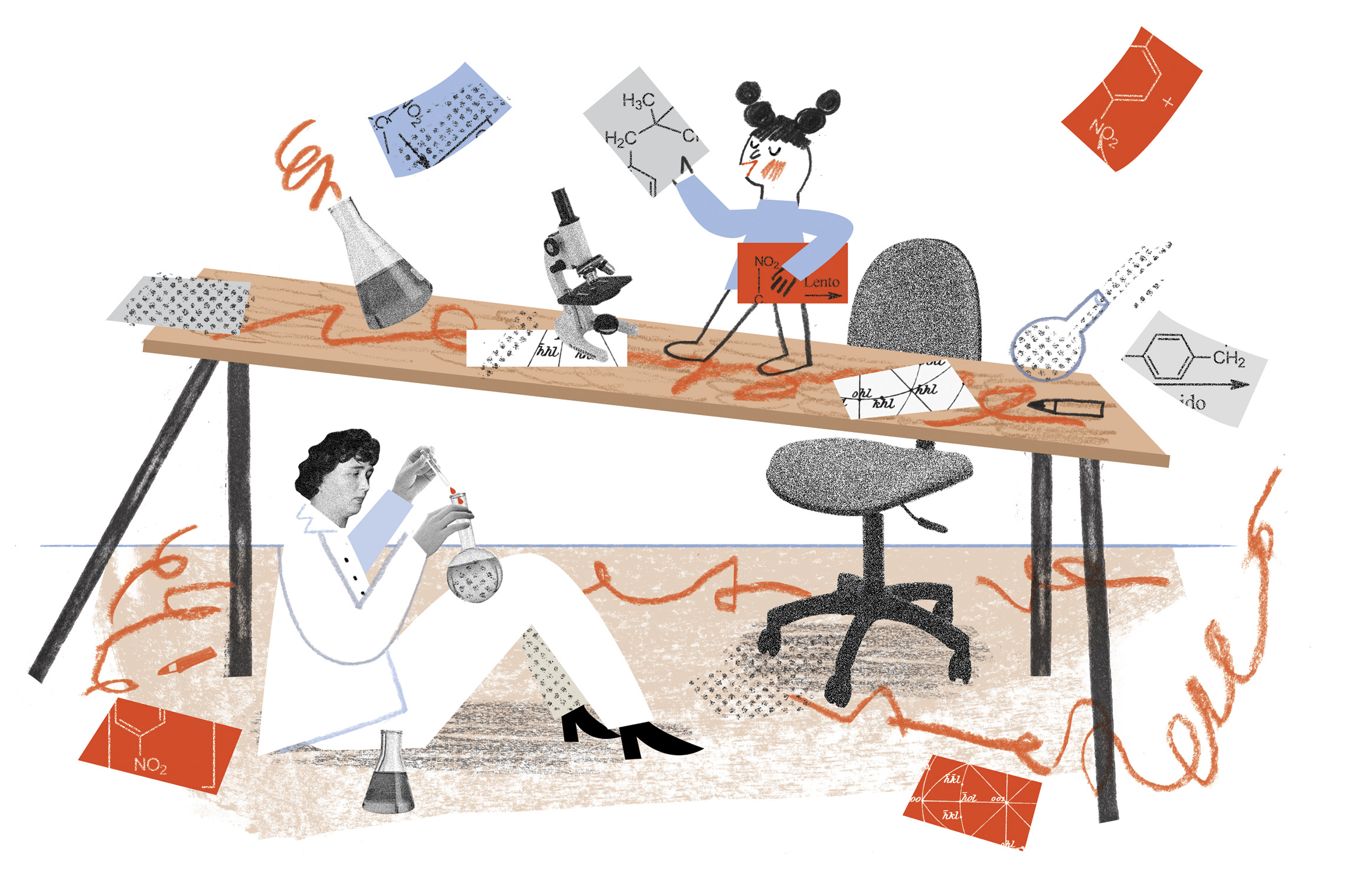 Computer scientist Juliana Freitag Borin had only recently taken her position as a professor at the University of Campinas (UNICAMP) Institute of Computing when she gave birth to her second child in June 2012. Upon returning from maternity leave six months later, she resumed her classes, student supervisions, and research on computer networks and the internet of things, maintaining her substantial academic output. In 2016, when her third child was born, things were different. “I left expecting that I would be able to continue with at least some of my work,” she says. But she soon realized that this would not be possible, and chose to refer the graduate students she was supervising to colleagues within the department, as well as handing over her teaching responsibilities to other professors. When she returned to the university, she was simply unable to produce the same level of scientific output.

Borin is one of many Brazilian researchers who face the challenge of reconciling teaching and research with the demands of motherhood—which often coincides with the period when most scientists are really establishing their careers. This is the conclusion of a study conducted as part of the “Parent in Science” project, created in 2017 to promote a discussion on motherhood in the Brazilian academic environment. The study involved 1,182 female researchers—including 921 mothers—and the preliminary results were presented at the 1st Brazilian Symposium on Motherhood and Science in Porto Alegre in May. Motherhood had a negative impact on the professional careers of 81% of the women in the study.

The project was started by biologist Fernanda Staniscuaski, from the Department of Molecular Biology and Biotechnology at the Federal University of Rio Grande do Sul (UFRGS) in Porto Alegre. In 2015, at the age of 34 and while on maternity leave with her second child, Staniscuaski received a notice from the International Foundation for Science (IFS)—a nonprofit organization offering research grants to young scientists from developing countries—reminding her to submit the final report for a project of hers that they had funded. The message also indicated that she was eligible to apply for new research funding. “In the midst of caring for my two young children, I forgot to respond to the email,” she recalls. “A few months later, I received another letter, stating that the final report was late and that I was no longer able to apply for further funding.”

After sharing her frustrations on social media regarding the conflict between being a good mother and a good scientist, Staniscuaski realized she was actually facing a widespread and rarely discussed problem. That was when she had the idea of working with other researchers experiencing the same dilemmas to create the Parent in Science project. The initial goal was to establish a research fund for scientists who are mothers. “However, we realized that we did not have any real data on what impact motherhood has on scientific careers in Brazil,” she says. “And so Parent in Science was converted into a research project designed to estimate this impact.”

Low productivity
To collect the data, the researchers created a questionnaire—which is available to those interested at http://bit.ly/2IyOlTf. For most respondents, the main obstacle faced by scientists who have become mothers is obtaining funding for research projects. The difficulty seems to be linked to the fact that the professional performance and progression of scientists is usually measured by productivity. “Most researchers who become mothers go through a period of reduced academic output,” says Rossana Soletti, a professor at West Zone State University (UEZO) in Rio de Janeiro.

She explains that while childless researchers often continue to publish a regular number of papers per year, the rate drops significantly for those who become mothers, a trend that only begins to reverse around four years after childbirth.

Motherhood seems to have a varying impact on a researcher’s academic career depending on their field, says ecologist Eugenia Zandonà, from the Institute of Biology at Rio de Janeiro State University (UERJ). “In fields such as geology, ecology, and paleontology, for example, where research often involves fieldwork away from home, the impacts of motherhood tend to be more acute,” she explains. “It is difficult to spend long periods of time away from home in the early years of the children’s lives, especially while breastfeeding.”

Staniscuaski says that after giving birth to her first child, she was rejected for funding by the Brazilian National Council for Scientific and Technological Development (CNPq), who claimed that her scientific output was “below expected” in relation to her peers. “Funding agencies do not factor in the impact of motherhood on productivity when evaluating funding proposals,” she points out. One exception, according to Staniscuaski, is Serrapilheira, a private foundation based in Rio de Janeiro, created in 2017 to fund research projects. In its first call for proposals, the institute afforded mothers 1–2 extra years (depending on the number of children) in the time taken to complete their PhD—one of the eligibility criteria for submitting a proposal.

“A recent victory in this regard was the approval of Law 13,536/2017, which gives master’s and PhD students who have been awarded scholarships by the CNPq and the Brazilian Federal Agency for Support and Evaluation of Graduate Education [CAPES] the right to maternity leave, including for adoptions,” explains Tamara Naiz, president of the National Association of Graduate Students (ANPG). “Women can now suspend their academic activities for up to 120 days without it affecting their scholarship.” The extension corresponds to the period of leave taken by the researcher. According to CAPES, the practice was first implemented by the agency in 2011. FAPESP adopted a similar policy in 2013, but with a broader scope. It includes scholarships for undergraduate researchers, postdoctoral fellows, and those on the Young Researchers in Emerging Centers program, among others.

In general, Brazilian universities have no specific policies for women resuming their scientific activities after maternity leave. In a statement, the University of São Paulo (USP) said that “the Office of the Dean is working to implement new procedures and to integrate the specific initiatives conceived by individual departments on an institutional level.” In light of this situation, the Parent in Science researchers launched a campaign called Maternidade no Lattes, which encourages scientists to include maternity leave on their online résumés. “Mentioning motherhood on your academic résumé is common practice in many countries,” says Soletti. “The aim is to show that you cannot compare the productivity of a researcher who has had no breaks in their career with that of someone who has spent a period of time on leave.”

Experiences abroad
The law passed in December 2017 is a small measure compared to the initiatives implemented in some countries. The National Science Foundation (NSF), the leading research funding agency in the USA, offers supplemental funding of approximately US$12,000 to researchers and graduate scholarship recipients in science, technology, engineering, and mathematics, to cover the cost of a lab technician for up to three months after childbirth. The European Research Council has also adapted its rules, and in 2008 created a gender equality program that gives researchers who take maternity leave more time to apply for research grants.

The Max Planck Institute in Germany has several programs for women with children, such as offering graduate students in the natural sciences and medicine extra financial assistance of up to €400 per month for household expenses and childcare. In England, Imperial College London provides a grant for researchers returning to work after childbirth or adoption, giving them up to 12 months off teaching and administrative duties so they can focus on their research. In Argentina, the National Scientific and Technical Research Council (CONICET) raises the age limit for graduate scholarship applicants by one year for each child they have.

The Parent in Science researchers want funding agencies and higher education and research institutions in Brazil to adjust the scientific output analysis period according to the amount of time a researcher has been on leave. “At the moment, these assessments generally focus on the last five years—this period could be extended to six years for women who have had one child and to seven years for those who have had two children or more,” says Zandonà. They also advocate for the development and adoption of a “good conduct guide” to be used in public hiring processes, to ensure that there is no discrimination against pregnant women and mothers. Another suggested measure is to create crèches on or near university campuses.

In relation to funding agencies, the Parent in Science group would like to see grants for substitute researchers to cover maternity leave, as well as financial support for dependents under 18, as already offered by FAPESP and many institutions overseas. “We need to normalize motherhood in the academic environment,” says Staniscuaski.