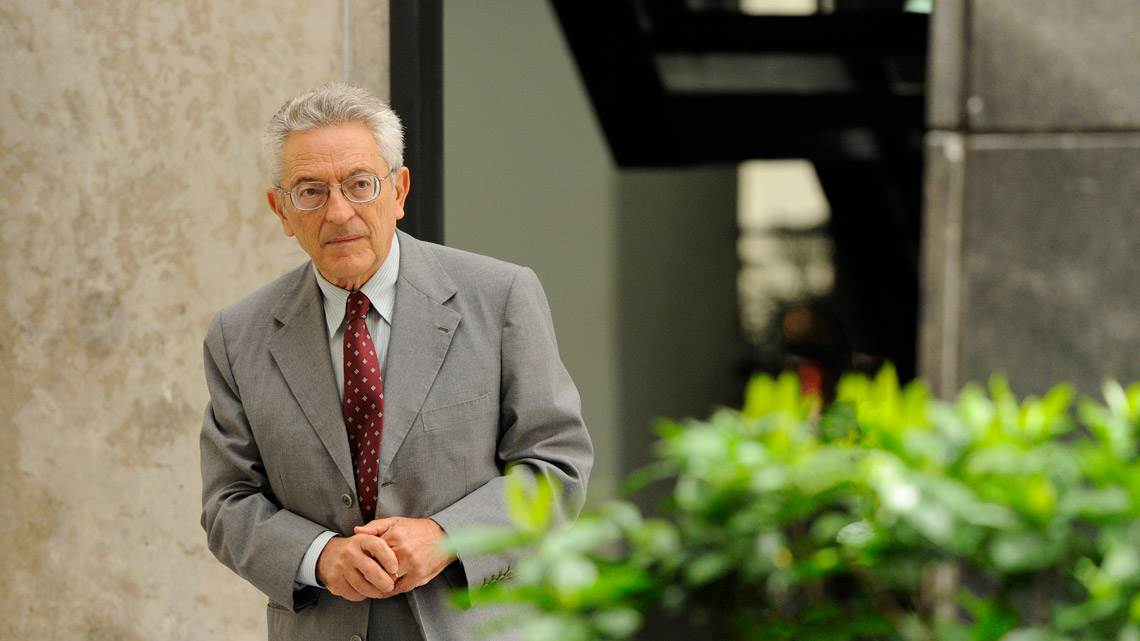 Alfredo Bosi, professor emeritus at the University of São Paulo (USP), died on April 7 in São Paulo, at the age of 84, a victim of Covid-19. Bosi, who began his career teaching Italian literature, developed pioneering literary analyses based on a deep knowledge of philosophy and history, and educated generations of professionals since the 1970s. Widowed by Ecléa Bosi (1936–2017), he is survived by their two children, Viviana, a literature professor at USP, José Alfredo, a physician and economist, and two grandchildren.

Of Italian descent, Bosi (see Pesquisa FAPESP issue nº 87) was born in São Paulo, on August 26, 1936. Son of a seamstress and a railwayman, he grew up in the district of Barra Funda. After graduating in 1960 with a degree in literature from USP, he studied for one year in Florence, Italy. Back in Brazil, he began teaching Italian language and literature at USP, in the Department of Neo-Latin Literature, now the Department of Modern Languages and Literature. In 1971, he transferred to the Department of Classical and Vernacular Languages and Literature, lecturing in Brazilian literature. He became a tenured professor in 1985.

“Bosi proposed a revision of the entire literary and cultural history of Brazil. Attentive to the big ideas, but also the small details, in this dialectic between the large and the small he unveiled different forms and new paths for understanding the Brazilian novel and poetry,” says Marco Americo Lucchesi, a professor at the School of Language and Literature at the Federal University of Rio de Janeiro (UFRJ), and president of the Brazilian Academy of Letters (ABL). “He was a ‘Renaissance man,’ he studied with the great masters and historians of Florence, creating an intellectual bridge between Brazil and Italy.”

An undergraduate student of Bosi, Paulo Martins, now director of the School of Philosophy, Letters and Languages, and Human Sciences (FFLCH-USP), emphasizes that, despite the depth of his thinking Bosi was concerned with writing works that could be understood by all audiences, and not just by experts. As an example he cites História concisa da literatura brasileira [A concise history of brazilian literature] (Editora Cultrix, 1970), regarded as the most enduring textbook on Brazilian literature to date, written by Bosi at the age of 34. A reference work for both undergraduate students and literature researchers, the book is now in its 52nd edition. In Martin’s assessment, “The work summarizes the trajectory of Brazilian literature in a clear and accessible way, contributing to the discipline’s popularization.”

Sergio Alcides Pereira do Amaral, from the School of Language and Literature at the Federal University of Minas Gerais (UFMG), attributes Bosi’s philosophical soundness and remarkable theoretical capacity to his education in Italian studies. “Even so, he never subordinated the literary work to theoretical issues,” he says. Amaral believes Bosi preserved the freshness and curiosity of being a poetry reader, instilling this attitude in generations of students.

In addition to the literary field, Martins, from FFLCH-USP, points out Bosi’s political activities, including his activities as a demonstrator in labor movements in Osasco, in Greater São Paulo, during the military dictatorship (1964–1985), and his work at the Dom Paulo Evaristo Arns Center for Defense of Human Rights, which he chaired from 1982 to 1984. “Bosi was Catholic, and his relationships with the progressive wings of the church and liberation theology resulted in important actions during the country’s re-democratization process,” he recalls.

“It’s reductionist to consider him just a critic. His education included knowledge of history and philosophy, as well as literary aesthetics,” adds Fernando Paixão, from the Brazilian Studies Institute (IEB-USP). He highlights Bosi’s poetry research, and his studies on the work of Machado de Assis. “In the case of Dom Casmurro, for example, Bosi inserts the work into a universalist tradition, highlighting the narrator’s role of revealing the afflictions common to humanity,” says Paixão, who edited several of the researcher’s books while he worked at Editora Ática. One of them, Machado de Assis: O enigma do olhar [Machado de Assis: The enigma of the gaze] (Ática, 1999), won the Jabuti Prize in the Essay and Biography category.

“In his analyses of Assis, Bosi offers perspectives anchored in Brazilian history and society, but he also seeks to cast a compassionate light on the author’s characters, revealing their human dimension and showing how both cruel and sublime aspects can coexist within them at the same time,” observes Hélio de Seixas Guimarães, from FFLCH-USP.

In a statement given via email, Alcides Vilaça, at FFLCH-USP, recalled his first exposure to Bosi during the professor’s course on Modernism, in 1971. “All the information, attributions, and nodal relationships between the subjects dealt with—with the literature at the center, but always in the perspective of connected relationships—were energized with a tacit commitment to the construction of life,” Vilaça writes.

For Alcir Pécora, from the UNICAMP Institute for Language Studies (IEL), Bosi was an intellectual capable of tackling any subject in Brazilian literary history, and had an intellect that was “balanced, conciliatory, and never sectarian.” “This ecumenical vision gave him a very effective type of institutional energy he used for consolidating several important projects throughout USP,” he observes, pointing out Bosi’s involvement in the creation of the Institute for Advanced Studies (IEA), where he served both as director (1998–2001 ) and deputy director (1987–1997), and was for 30 years the editor of the journal Estudos Avançados. Pécora also calls attention to the research Bosi conducted in the field of colonial literature and, in particular, Jesuit literature.

In 1996, the researcher was awarded the Order of Rio Branco and, in 2003, he became the seventh occupant of Chair No. 12 of the Brazilian Academy of Letters. After a marriage of 57 years to psychologist Ecléa Bosi (see Pesquisa FAPESP issue no. 218), a professor at the USP Institute of Psychology (IP), Bosi was profoundly impacted by her death in 2017, Paixão observes. “His health weakened, and he began to let his literary activities fall away. Even so, perhaps because of his relationship with Catholicism, he displayed a hopeful attitude and didn’t let it paralyze him.”