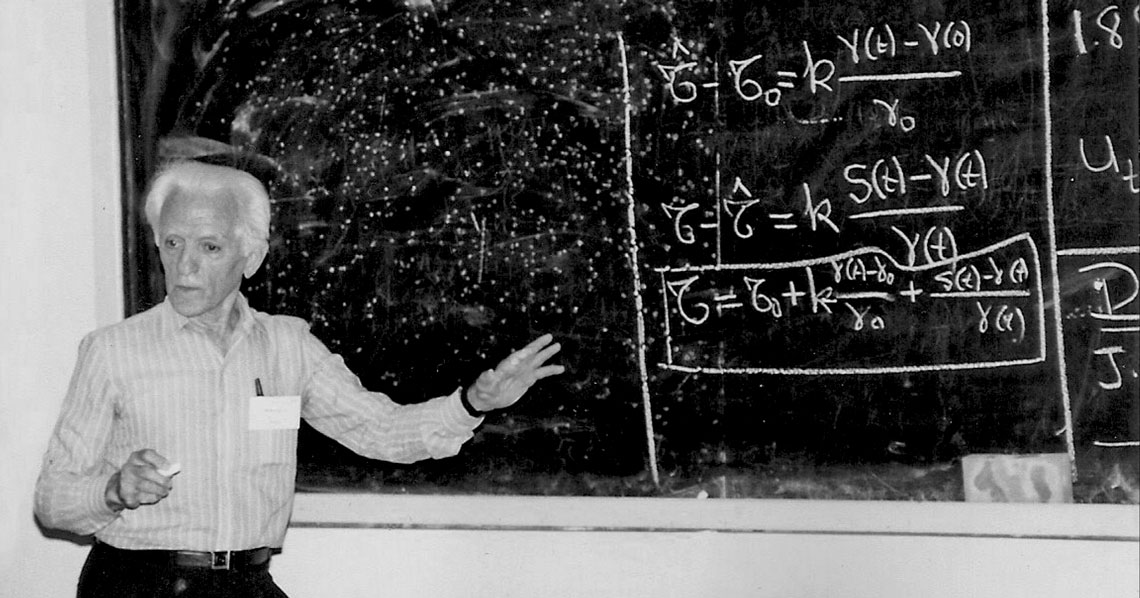 The mathematician at an international conference in Bulgaria, 1999

In 1944, at the age of 18, Luiz Adauto da Justa Medeiros left Fortaleza, Ceará, to complete his studies in Rio de Janeiro. He was following the path laid out by his family: to train as a doctor and then return to practice the profession. His interest and aptitude for mathematics, however, did not allow him to fulfill their plan. In 1948, he decided to go against his family’s wishes and started a degree in mathematics at the University of Brazil, now the Federal University of Rio de Janeiro (UFRJ). As punishment, his parents ceased all financial support. In need of an income, he began teaching, obtaining his diploma in 1951. The following year, he started as an assistant professor at the same university. In 1956, he completed his bachelor’s degree. It was the beginning of a distinguished teaching and research career in Brazilian mathematics. Medeiros died in his sleep in Rio on June 4, of natural causes, aged 96.

In addition to his theoretical contributions, Medeiros was considered a great educator and disseminator of mathematics in Brazil, familiarizing his students with cutting-edge international research. “Professor Luiz Adauto was the great educator of Brazilian mathematicians,” says Ângela Rocha, a mathematician from UFRJ. Medeiros was her PhD supervisor between 1992 and 1996—she was one of 31 doctoral students and 22 master’s students he supervised. Even with so many responsibilities at the graduate school, he continued to teach undergraduates. He had a talent for clearly explaining difficult concepts to young students and researchers at the beginning of their careers, in addition to producing textbooks for undergraduate and graduate students on topics that were not previously available in Portuguese.

The mathematician established contact with international research groups and arranged foreign exchanges for many Brazilian students. His direct work with mathematics at some of Brazil’s biggest academic institutions began in 1962, when he started his PhD at the National Institute of Pure and Advanced Mathematics (IMPA) in Rio de Janeiro, working with Leopoldo Nachbin, and later with a scholarship from the Brazilian National Council for Scientific and Technological Development (CNPq) to study with American mathematician Felix Browder (1927–2016) at Yale University, USA. He defended his thesis at IMPA in 1965. Mathematics historian Clovis Pereira da Silva, a retired professor from the Department of Mathematics at the Federal University of Paraná (UFPR), says that under Browder’s guidance, Medeiros learned in depth about a field to which he would make many important contributions: partial differential equations (PDE).

Back in Brazil, Medeiros helped design the graduate program at UFRJ’s Institute for Mathematics (IM), which began in 1968—he was also its first director. “He participated in a period of effervescence and creativity in the Brazilian mathematical community,” says Silva, author of the book A vida acadêmica e a influência do matemático Luis Adauto da Justa Medeiros (The academic life and influence of mathematician Luis Adauto da Justa Medeiros; UFRJ/IM, 2020). Medeiros was also involved in shaping the mathematics community in Peru. With funding from the Ford Foundation, he spent three months in 1967 teaching at the National University of San Marcos in Lima, where he selected students to attend graduate courses at UFRJ. Some continued their careers in Brazil while others returned to Peru, where they trained more researchers and educators in the field.

In the 1970s, he did a postdoctoral fellowship in Paris with one of the biggest names in the field of PDEs, French mathematician Jacques-Louis Lions (1928–2001). Several Brazilian students later studied their PhDs in Paris as a direct result of the relationship he established with the group led by Lions. Rocha says that after graduating, they returned to Brazil and formed their own research groups. Medeiros also took great interest in welcoming young people from rural Brazil to UFRJ. This was part of his effort to decentralize academic productivity, which was highly concentrated in Rio de Janeiro and São Paulo. “As a result, there is now a nationwide network of groups studying partial differential equations,” says Rocha.

Medeiros helped develop innovations in the field of PDEs, a branch of applied mathematics, and was primarily responsible for introducing novel theories in Brazil. In a speech he gave during a celebration of his 90th birthday at UFRJ, he explained that his interest in applied mathematics grew from his attempts to understand how the theoretical formalizations he was studying could be applied to physical phenomena and practical solutions.

Manuel Milla Miranda, a Peruvian who was one of the students from Lima selected by Medeiros to study in Brazil, is now a mathematics professor at UFRJ. He explains that PDEs are equations used to model physical phenomena, such as the vibration of elastic bodies. But “classical PDE solutions did not encompass all the physical phenomena we wanted to study,” he explains. “We needed a broader tool.” This mathematical tool, a modern method of finding PDE solutions, was introduced in Brazil by Medeiros. “It was an important contribution not only to mathematics, but also to physics, because it encompasses a wider range of phenomena,” says Miranda.

According to Clovis Pereira da Silva, “Medeiros’s studies of nonlinear partial differential equations led to results that were incorporated into the global literature on mathematics.” One of the Brazilian mathematician’s most recognized contributions was a theorem named after him: Medeiros’ Uniqueness Theorem, which was described in the book Uniqueness and Nonuniqueness Criteria for Ordinary Differential Equations (World Scientific, 1993), by Ravi P. Agarwal and Vangipuran Lakshmikanthan.

Other papers and publications by Medeiros also had an international impact. “I studied some of his articles as part of my PhD in Paris between 1985 and 1988,” says Spanish mathematician Enrique Zuazua, an Alexander von Humboldt professor at the Data Mathematics Center of the University of Erlangen-Nuremberg, Germany. “The fact that I still remember these works 35 years later says a lot about them.” Zuazua recalls that the articles “were written in Professor Medeiros’s style: clear, transparent, and concise.”

“Medeiros was a highly productive mathematician,” says Rocha. Academic productivity indices vary widely across different fields of research. “In some areas a highly productive researcher is someone who publishes three or four articles a year, but in mathematics, one article per year is considered very high,” she explains. According to data from the Lattes résumé platform, Medeiros has published 92 articles in journals, in addition to 17 books and 30 book chapters.

Silva, however, warns students not to attempt to emulate Medeiros in this regard, encouraging them to resist the “publish or perish” culture and to assess whether what they are trying to publish really is new and relevant.

Medeiros remained active even into old age: the last of his scientific articles was published in 2015, when he was 89. He is survived by four children, eight grandchildren, one great-grandchild, and his wife, the physicist Lourdes Maria Palma Medeiros.