This year, the six Nobel Prize categories honored 14 people. Only one was a woman: French economist Esther Duflo. Polish writer Olga Tokarczuk also received the literature award, but retrospectively for 2018, when no award was made in the category. The low number of women among Nobel laureates is nothing new. Since the first prize categories were created in 1901, 950 people have received a Nobel Prize. Only 22 of them were women, half of whom have been given the award since the year 2000. The imbalance could be a result of the under-representation of women in the exact, biological, and social sciences. It is not. Together with two colleagues, physicist Liselotte Jauffred of the University of Copenhagen, Denmark, analyzed the history of the prize. They used the proportion of women at American universities as an approximation for the rest of the world and found that the number of women who receive the award is much lower than the percentage of them working in physics, chemistry, economics, and physiology or medicine. They concluded that there is a bias against women with a probability of 96% (Palgrave Communications, May 7). Each category offers a cash prize of 9 million Swedish krona, the equivalent of roughly US$1 million. 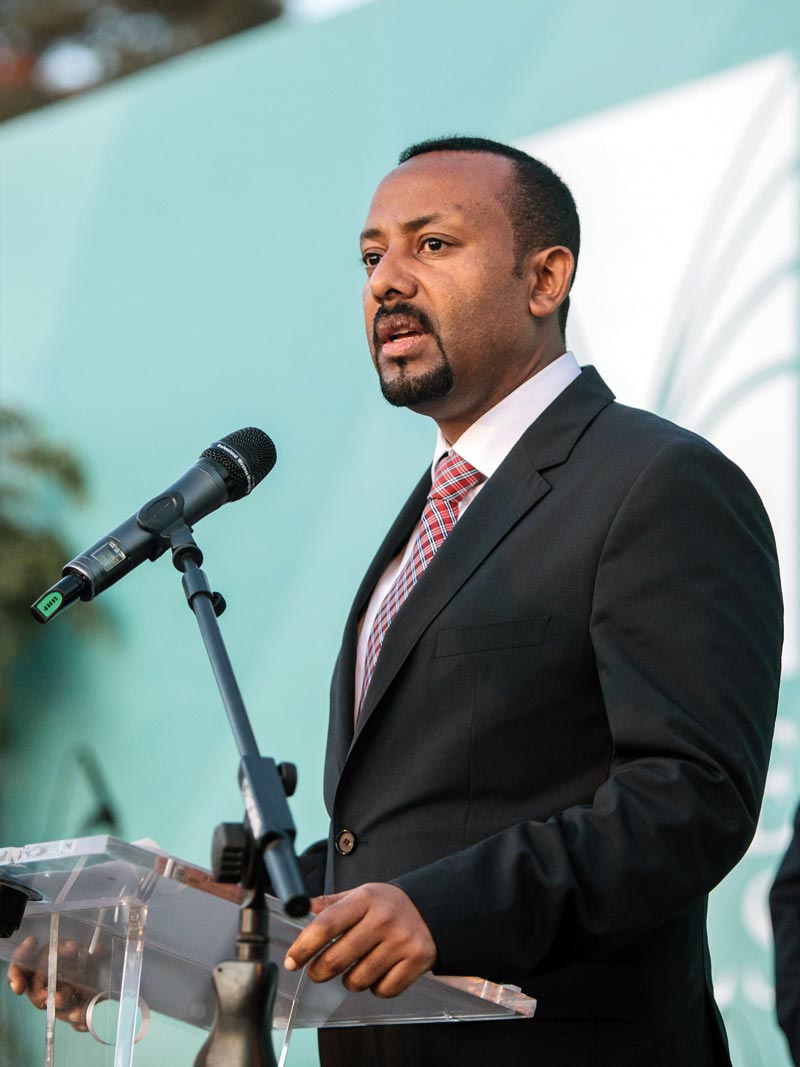 Ethiopian Prime Minister Abiy Ahmed Ali won the 2019 Nobel Peace Prize for his efforts to resolve long-running border tensions with Eritrea and for promoting international cooperation. In 1988, a dispute over control of the Badme region led to a two-year war that ended with 100,000 dead. By signing the agreement, Ethiopia recognized the region as Eritrean territory, and Eritrea granted Ethiopia access to the Red Sea. With the resumption of air and sea traffic, both countries reopened embassies and allowed the movement of people across the border. Born in the city of Beshasha in 1976, Ali became prime minister in April 2018. In his first 100 days in charge, his administration ended the country’s state of emergency, granted amnesty to political prisoners, and fired civil and military leaders suspected of corruption. He has contributed to improved diplomatic relations between Eritrea and Djibouti and has mediated meetings between the leaders of Kenya and Somalia in an attempt to resolve maritime disputes. He has also made a significant effort to increase the number of women in politics by encouraging gender equality in his cabinet. In his inaugural address, he thanked his mother and praised the strength of women. As leader of Ethiopia’s house of representatives, he appointed diplomat Sahle-Work Zewde as the country’s first female president.

The structure of the universe and new solar systems

A trio of researchers received the 2019 Nobel Prize in Physics for their contributions to what we know about the evolution of the universe and Earth’s position in the cosmos. Half of the award went to 84-year-old Canadian-American physicist James Peebles of Princeton University in the USA. Peebles began his work in the 1960s and formed the basis of the modern consensus on the history of the universe since the Big Bang. His work helped American radio astronomers Arno Penzias and Robert Wilson interpret a form of radiation they detected in 1964, which earned them the 1978 Nobel Prize in Physics: cosmic microwave background radiation, a signal produced 400,000 years after the Big Bang. Research by Peebles also helped scientists to determine that the universe is flat and constantly expanding, and to predict the existence of two mysterious components of the cosmos: dark matter and dark energy. The other half was divided between Swiss astrophysicists Michel Mayor, 77, and Didier Queloz, 53, both from the Geneva Observatory in Switzerland. In 1995, Mayor and Queloz announced the discovery of 51 Pegasi b, the first planet found orbiting a Sun-like star outside our solar system, about 50 light years from Earth. Today, we know of more than 4,000 such exoplanets.

This year’s Nobel Prize in Chemistry was shared by researchers who played a key role in the development of rechargeable batteries: British chemist M. Stanley Whittingham, from the State University of New York at Binghamton, USA, American mathematician and physicist John Bannister Goodenough, from the University of Texas at Austin, USA, and Japanese chemist Akira Yoshino, from Meijo University in Japan. In the 1970s and 1980s, the group conducted studies that led to the creation and commercial production of lithium-ion batteries, which are today used in electric cars (see page 70). Whittingham began investigating innovative forms of energy storage during the 1970s oil crisis. He was working for oil company Exxon at the time, and realized he was able to produce a battery with a large accumulated charge capacity by making the positive electrode (pole) from a material deposited on slides of microscopic thickness. The structure allowed lithium dissolved in the electrolyte and then electrically charged (in the form of an ion) to penetrate the material and accumulate, attracting electrons. At the University of Oxford, UK, Goodenough, now 97 and the oldest of this year’s Nobel winners, created batteries capable of accumulating even more charge by replacing the titanium disulfide Whittingham used on the positive electrode with lithium and cobalt oxide. In the 1980s, Yoshino perfected this battery by replacing the metal lithium block (which is explosive) of the negative electrode with coke, a petroleum by-product. “His work made the batteries lighter and safer,” says UFSCA chemist Nerilso Bocchi. “Lithium-ion batteries have had a major impact on people’s lives and opened a whole new field of research that is attempting to diversify energy storage technologies,” explains USP chemist Roberto Torresi. 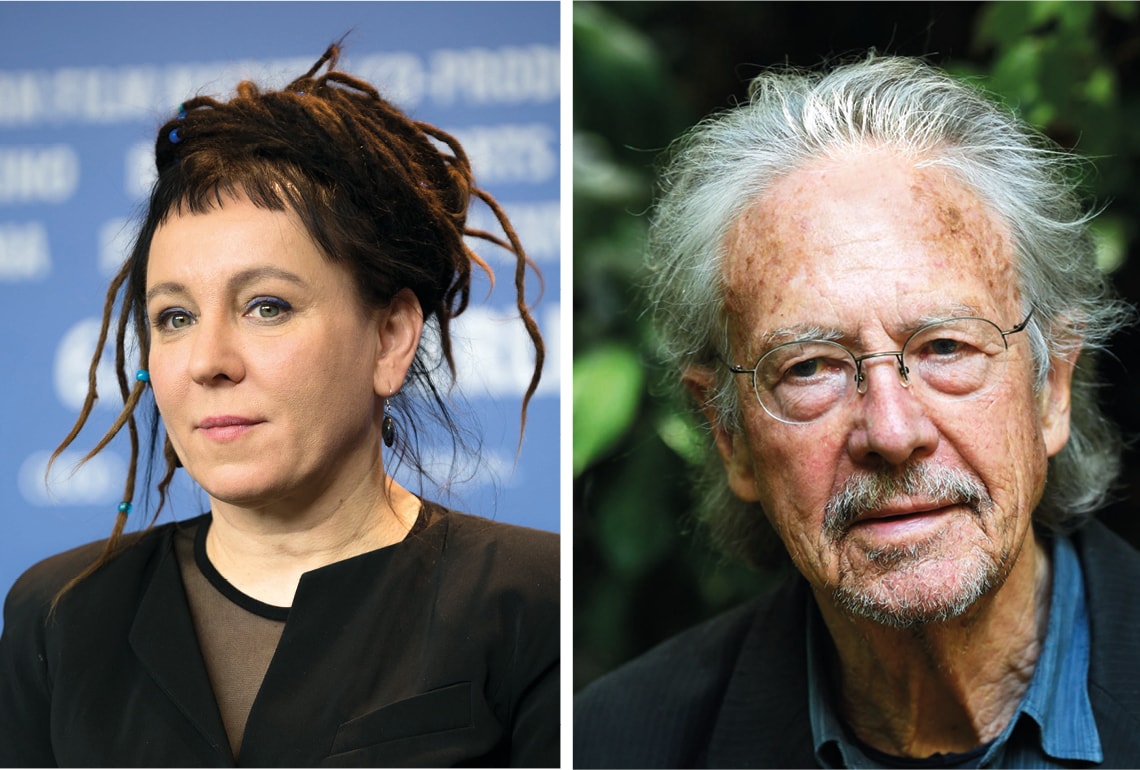 The winners of the 2018 and 2019 Nobel Prizes in Literature were Polish writer and activist Olga Tokarczuk and Austrian novelist and playwright Peter Handke, respectively. Olga Tokarczuk is the 15th woman to win the Nobel Prize in Literature, which has been awarded 116 times. A best-seller in Poland, only one of her books has been translated into Portuguese: Vagantes (“Flights”) (Tinta Negra, 2014). Publishing house Todavia, responsible for her works since November, is preparing to release Sobre os ossos dos mortos (“Drive Your Plow Over the Bones of the Dead”). “Tokarczuk thoroughly researches the history behind her work, with a view to shedding light on aspects beyond canonical knowledge,” says Henryk Siewierski, coordinator of the Cyprian Norwid School of Polish Studies at the University of Brasília (UnB). In her nearly 20 books, Tokarczuk, who was born in the city of Sulechów in 1962, also describes an unorthodox view of Polish history. Peter Handke, meanwhile, was born in 1942 in Griffen, a town on the Slovenian border of Austria. He has a law degree and lives in Paris, France. Considered an innovator in German-language literature, he has published about a hundred books, including plays, short stories, novels, and screenplays. “Handke explores language and defies all conventions. He tries to capture the world without simply passing through it; he is interested in sensations, in a search for simplicity, authenticity, and purity,” observes Celeste Henriques Marquês Ribeiro de Sousa, a professor in the German Language and Literature graduate program at the University of São Paulo (USP). Migration and solitude are also recurring themes in his works. Writers’ groups from various countries criticized the decision to award the prize to Handke, who in the past supported Serbian leader Slobodan Milosevic (1941–2006), charged with war crimes and crimes against humanity by the International Criminal Court.

The 2019 Nobel Prize in Medicine was awarded to William Kaelin Jr. of Harvard University, USA, Gregg Semenza of Johns Hopkins University, USA, and Peter Ratcliffe of the University of Oxford, UK, for their description of the molecular mechanisms that help cells adapt to oxygen (O2) levels. The three scientists found that the system works by activating or deactivating certain genes. Oxygen is used inside cells to turn glucose into energy. Often, however, oxygen availability decreases (known as hypoxia). During the evolutionary process, humans developed mechanisms for identifying the availability of O2 and ensuring that sufficient volumes reach the body’s tissue. One involves the carotid body, the other the hormone erythropoietin (EPO). Both systems were already known, but the genes that regulate them were not. In the 1990s, Semenza and his group located DNA sections near the EPO gene that help mediate the body’s response to hypoxia by encoding a protein complex called the hypoxia-inducible factor (HIF). When studying these genes, Ratcliffe observed that the mechanism was present in various cells in the body. While researching Von Hippel-Lindau Syndrome, a genetic disease associated with tumors triggered by mutations in the VHL gene, Kaelin found that abnormally functioning VHL cancer cells had a high number of genes activated by hypoxia regulation. The activity of these genes returned to normal when functioning copies were reintroduced into the cells. Kaelin concluded that the protein expressed by VHL interacted with the HIF, causing it to degrade.

Studies on how to combat poverty

This year’s Nobel Prize in Economics was awarded to three researchers who helped develop innovative methods for researching poverty and ways to fight it. American development economist Michael Kremer of Harvard University, Indian-American economist Abhijit Banerjee, and French-American economist Esther Duflo, both from the Massachusetts Institute of Technology (MIT), will share the prize, created in 1969 by the Central Bank of Sweden in memory of Alfred Nobel. In the 1990s, 54-year-old Kremer, 58-year-old Banerjee, and 46-year-old Duflo explored experimental methods rarely used in economics research to find ways of lifting large numbers of people out of extreme poverty. They divided the problem into multiple questions and conducted experiments in communities or entire countries to assess which practices and public policies would best solve each aspect. “They incorporated methods used in medicine into public policy analysis, such as randomized trials,” says economist Naercio Menezes Filho, from INSPER, a higher education and research institution based in São Paulo. The same approach used in drug efficiency studies, such as a randomly selected test group and a placebo group, was applied in the search for strategies to combat child mortality and increase school attendance. In the 1990s, Kremer analyzed the school performance of children in Kenya and concluded that providing more books had no impact on grades, showing that scarcity of resources alone did not explain educational problems. Married couple Duflo and Banerjee worked in India and saw that teaching methods created with no regard for student needs were a barrier to learning. Tutor training improved performance. Born in France, Duflo is the youngest person—and the second woman—to win a Nobel Prize in economics.