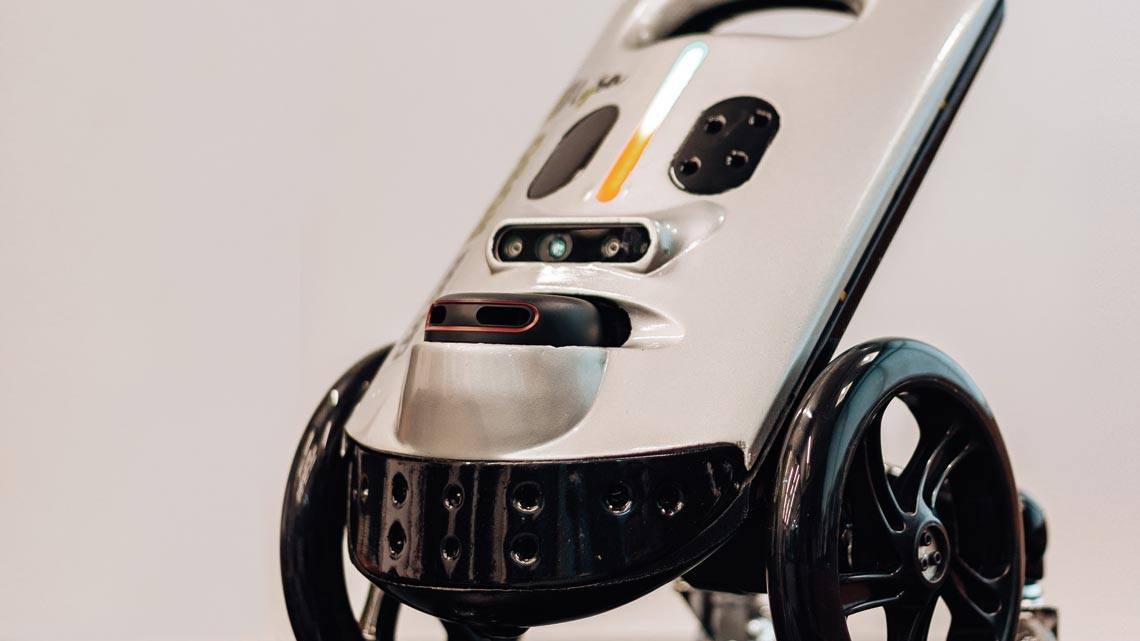 Equipped with sensors, a camera, and artificial intelligence, Lysa is sold for R$15,000

A 4-kilogram robot, 40 centimeters tall and shaped like a small suitcase with a retractable handle and wheels, could become a common sight over the coming months, accompanying people with visual impairments in malls, stores, and airports in Espírito Santo, Rio de Janeiro, and São Paulo. Lysa, a robotic guide dog, has been under development by startup Vixsystem since 2014 and was launched on the market for indoor use in late 2021.

With its own bespoke software, a mobile app, artificial intelligence, an array of sensors, a camera, and a Lidar (Light Detection and Ranging) laser system, the Lysa robot maps the location, traces a route to the destination, and guides the user to the desired point. While moving, it emits audible warnings and vibrations (see infographic).

“It identifies objects in front of and above the user, moves around them, and alerts the user if there is a person or group in their path. In other words, it gives precise directions and is much smarter than a cane,” says Neide Sellin, CEO of the startup, who has a degree in computer science. She is referring to the smart canes that already exist on the market, capable of identifying obstacles not only on the ground, but also at head height, such as tree branches and hanging plants, which often cause problems for blind people.

“This month [March] we have orders for 20 units,” says Sellin. “Of these, some are sales and others are being sent for customers to test. Because it is a new project, companies want to test them first, determine demand, and then make purchases.” Each robot is sold for R$15,000.

The startup expects to have a new version equipped with GPS available for outdoor use by next year. “We still need to resolve some issues before it is able to navigate the streets. The biggest challenge is when there is no sidewalk.” Since 2021, Sellin has been receiving funding from FAPESP, under its Research for Innovation in Small Businesses (RISB, or PIPE in Portuguese) program, for development of the outdoor version of the robot.

Vixsystem was selected through a call for bids for strategic internet research issued by FAPESP, Brazil’s Ministry of Science, Technology, and Innovation (MCTI) and Ministry of Communications (MCOM), and the Brazilian Internet Steering Committee (CGI.br). It was the first time a startup from outside São Paulo has been funded by the RISB program. Research outside São Paulo can be funded by FAPESP in partnership with MCTI, MCOM, and CGI.br.

Handmade prototype
The entrepreneur says she had the idea of creating a robot guide dog in 2011 while teaching robotics classes at a public high school in Serra, a municipality in the Metropolitan Area of Vitória, the state capital of Espírito Santo. “After researching and verifying that there was a demand, I built a prototype with my students using parts from other robots. We tested it and invited 20 visually impaired people to give their opinions,” she recalls. “And they wanted to buy one, even though it was just a handmade prototype. That really made me realize the demand and importance of developing a product like this. I wasn’t able do it as quickly as I wanted, but I did it.”

The initial impetus to create the prototype arose from a research project funded by the Brazilian National Council for Scientific and Technological Development (CNPq) in 2014. The institution’s support allowed Sellin to hire two researchers with master’s degrees—one an electrical engineer and the other a computer engineer—to advance the project. “There was a lot of prototyping, a lot of testing. I came up with the concept for Lysa thanks to the feedback of over 200 visually impaired people.”

In 2017, after participating in the Brazilian version of the entrepreneurship reality TV show Shark Tank, she earned R$200,000 in investment and the publicity helped in the search for other sources of funding. Vixsystem also received investment from the Brazilian Funding Authority for Studies and Projects (FINEP) and the Espírito Santo State Foundation for Research and Innovation (FAPES).

For Marcelo Panico, a legal consultant for institutional relations at the Dorina Nowill Foundation for the Blind in São Paulo, the idea of a robot guide dog is promising, but because it is a new technology, it needs to be assessed with caution. He believes that in addition to the cost of the robot, the advantages and disadvantages of the new technology also need to be analyzed from a social perspective. “Guide dogs are respected by society and their presence in environments is covered by law. A dog can also become a companion to the blind person and can help improve their self-esteem.”

Panico points out, however, that guide dogs are rarely used in Brazil. It is estimated that there are only 200 of them nationwide, in a country with approximately 6.5 million visually impaired people. Guide dogs, he points out, are usually trained abroad at a cost of US$10,000 and the waiting time to get one is up to two years. The training costs are usually covered by partner institutions and projects. 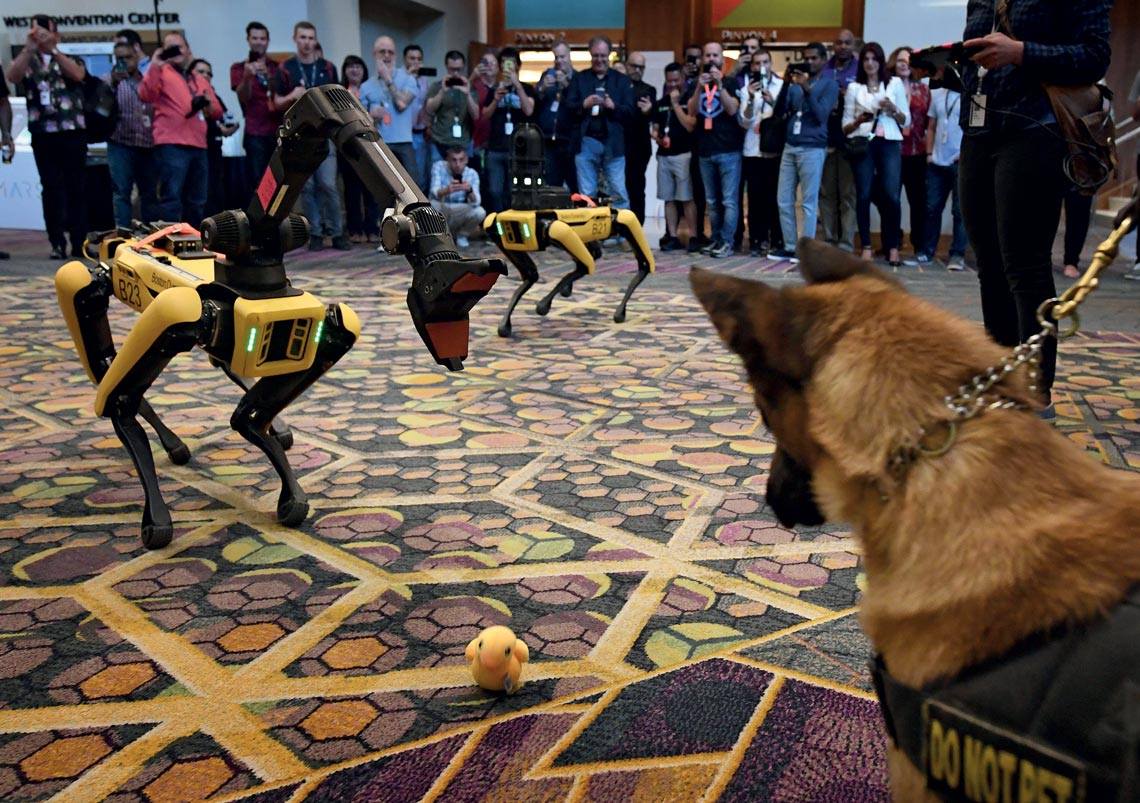 Robot with paws
Lysa is not the only product in the developing world of robotic dogs. Another robotic guide dog has been taking shape since 2017 in Catanduva, a town in the interior of São Paulo. The initiative is led by Diego Renan Bruno, a graduate student at the Mobile Robotics Laboratory (LRM) of the Institute of Mathematics and Computer Science (ICMC) at the University of São Paulo (USP), São Carlos campus, and his former student at the Catanduva School of Technology (FATEC), Marcelo Assis.

The researchers have already developed two prototypes, the second of which they made in 2019 as part of Red Bull Basement, a program by the energy drink company that encourages students to make their technology solutions real. The first version was built from the parts of a used vacuum cleaner. “Ours is not a final product yet; it’s under development and the next version, the third, will be a robot with paws,” says Bruno. “I think if you’re going to call it a guide dog, it has to do what a real guide dog does.”

The fact that a guide robot uses wheels, says Bruno, is a problem because it can only reach places that are accessible to wheelchairs, for example. Sellin from Vixsystem, however, believes that because it is small and light, the Lysa robot—the first of its kind launched anywhere in the world, according to the entrepreneur—is perfectly suitable for accompanying the visually impaired, since it can be transported easily in cars and can even be carried by hand. “It stops and warns the user when there is an escalator, for example, and they can then carry the device like a shopping basket.”

For Bruno, the four-legged robotic dog developed and sold by American company Boston Dynamics is the benchmark for other companies worldwide and could be used for blind people. Called Spot, it is already used in the construction and mining industries for tasks such as land inspections and reconnaissance. One obstacle to access by the general public, however, is the price: Spot costs over US$70,000 in the USA.

“Other companies in China, Japan, and Germany have created dog-like robots inspired by Boston Dynamics. Despite being a great model, it’s a long way from our goal of developing something low-cost,” says Bruno. A much cheaper Chinese version of a four-legged robot is already on the market. Unitree Robotics offers six robotic dog models, the most basic of which sells for US$2,700. None of them, however, are designed to be used as a guide for the visually impaired; they are intended for underground inspections, surveillance, and detecting explosives, among other applications.