Increasing rates of automation and mechanization, and growing access to new technologies, are reshaping the agricultural landscape in Brazil. These are the conclusions drawn from an analysis of the Agricultural Census published by the Brazilian Institute of Geography and Statistics (IBGE) in October 2019. According to the report, between the 2006 census and 2017 census, the number of farms with internet access grew by 1,900% and farms equipped with tractors and harvesters rose by nearly 50%, while the contingent of farm workers shrank by 1.5 million people, or 9%.

“In recent years, Brazil’s farmers have invested heavily in machinery, and this has reduced the number of workers needed on farms. The replacement of human labor my machines is occurring across different industries,” says IBGE analyst Marcelo Souza de Oliveira. In 2017, the rural workforce of 15.1 million people was the smallest since 1960 (see infographic opposite).

A survey by the Center for Advanced Research in Applied Economics (CEPEA) at the Luiz de Queiroz College of Agriculture (ESALQ), of the University of São Paulo (USP), has also identified job losses in agriculture. According to CEPE, data from the IBGE’s Continuous National Household Sample Survey (PNAD-Continuous) show that the number of people employed in farming activities declined by 16%, or 1.6 million people, in the period 2012–2018.

A positive effect from more technology-intensive farming has been higher productivity. In soybean crops, yields increased 30% during the period between the 2006 and the 2017 census, while maize yields rose 56% and rice yields 60%. “When we speak of technology, we’re referring not only to mechanization, automation, and internet connectivity, but also to the adoption of irrigation and planting methods and the use of fertilizers, pesticides, and biotechnology,” explains Oliveira. 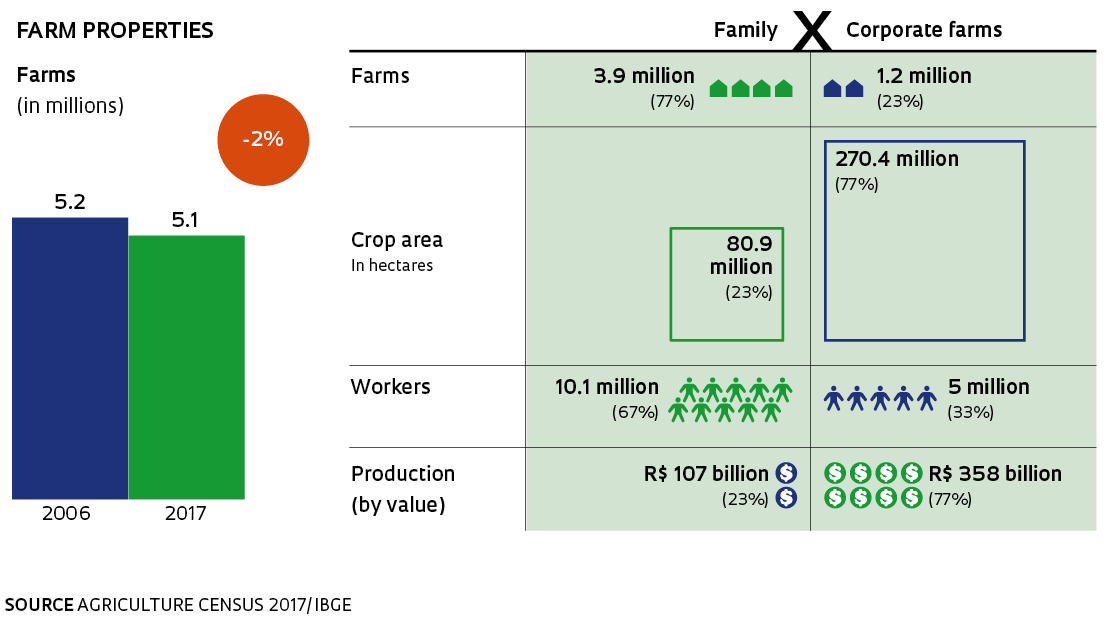 Higher concentration
The Agriculture Census also revealed that land in Brazil remains highly concentrated in the hands of a small number of landowners. In 2017 the country had 51,200 farms with 1,000 or more hectares of land (equivalent to 10 square kilometers or 1,400 soccer fields). Together, they accounted for only 1% of the total farm count, but 48% of total farmland. In 2006, the share of farmland held by these farms was slightly lower at 45%.

Large corporate farms, say specialists, mostly produce export commodities such as soybean, maize and sugar, while family farms—which account for 77% of the farm count and employ 67% of workers—are primarily devoted to growing produce for the domestic market.

Economist Nicole Rennó Castro, a researcher at CEPEA, says extensive modernization leads to concentration. “Small and technologically underdeveloped farms are the most affected and are unable to survive in today’s highly competitive environment,” says Castro.

The IBGE survey also examined the use of pesticides in Brazil and found that the number of farms using pesticides grew by 20% between 2006 and 2017, with pesticides now used on 1.7 million farms, or 33% of the total count. Another finding from the survey was that 15% of farmers who used pesticides on their plantations were illiterate and, of these, 89% said they had not received technical instruction. 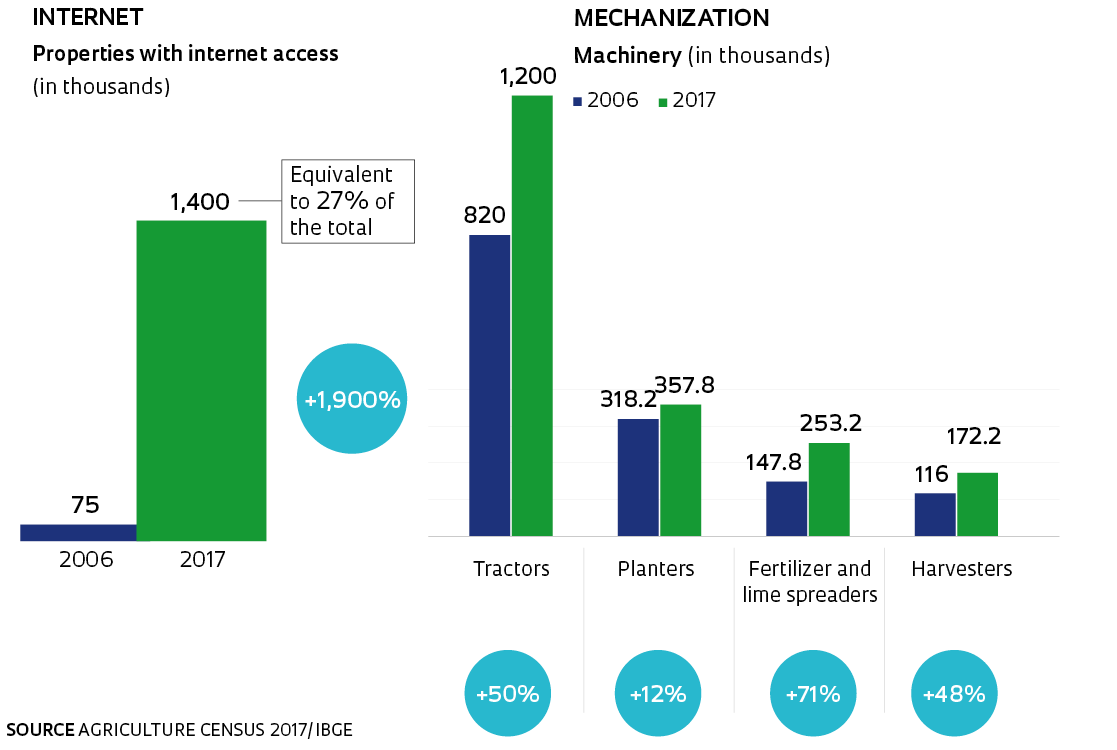