Not far from the Hermit Trail, one of the best-known hiking routes at Grand Canyon National Park in the US state of Arizona, is a 4.6-meter-long, 2.2-meter-high sandstone boulder, first discovered in 2013. The giant stone fell from one of the slopes for which the arid and mountainous region is famous, and is made of sedimentary rock formed by the compaction of quartz from a desert that existed there some 280 million years ago, at the beginning of the Permian period. On one side of the boulder there are four fossil footprint tracks, left by prehistoric animals when the region was still a desert with dunes formed by the wind. Another 12 sets of similar tracks were found in six other places in the region, all in Permian rocks of a geological formation known as Coconino sandstone. Paleontologists from Brazil, the USA, and Germany studied the fossil footprints and came to an unexpected conclusion: the tracks were left by animals that in theory, should not have been capable of living in the desert, since they were not amniotes (the group known to have been able to survive and reproduce in dry environments). 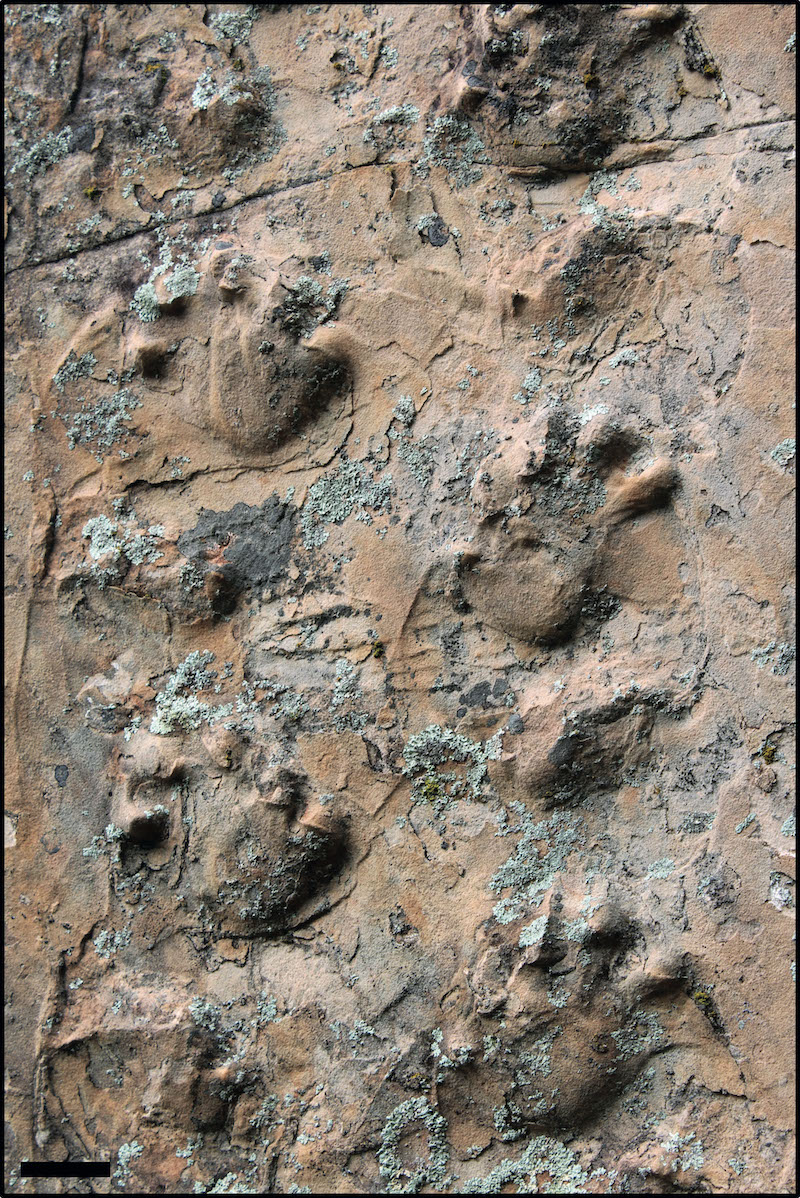 The fossil footprints are the earliest record found in a desert of an extinct group of vertebrates called diadectomorphs—quadrupeds with both amphibian and reptilian characteristics. “This is the earliest evidence of the colonization of a desert environment by vertebrate anamniotes, which in principle were not capable of living in such arid places,” says paleontologist Heitor Francischini, currently a postdoctoral fellow at the Federal University of Rio Grande do Sul (UFRGS) and lead author of the article describing the footprints, published in the scientific journal Paläontologische Zeitschrift on May 13, 2019. “We did not expect to find records of these animals in rocks from a prehistoric desert.”

Anamniotes are vertebrates whose embryos are not covered by a membrane (of amnion, chorium, or allantois) to protect them against dryness and impact, and whose eggs do not have a hard shell, meaning these animals, today represented by fish and amphibians, must live in or near the water where they lay their eggs. Amniotes, which today comprise reptiles, mammals, and birds, gestate their young within their own bodies or lay hard-shelled eggs. Similar to lizards in appearance, the diadectomorphs are considered transition animals between the anamniotes and the amniotes. “Before these footprints were found, we thought that only a few amniote species lived in these ancient deserts,” says Spencer Lucas, another author of the study and curator of the paleontology department at the New Mexico Museum of Natural History and Science in Albuquerque. “Now we know that the inhabitants of these environments were much more diverse.” 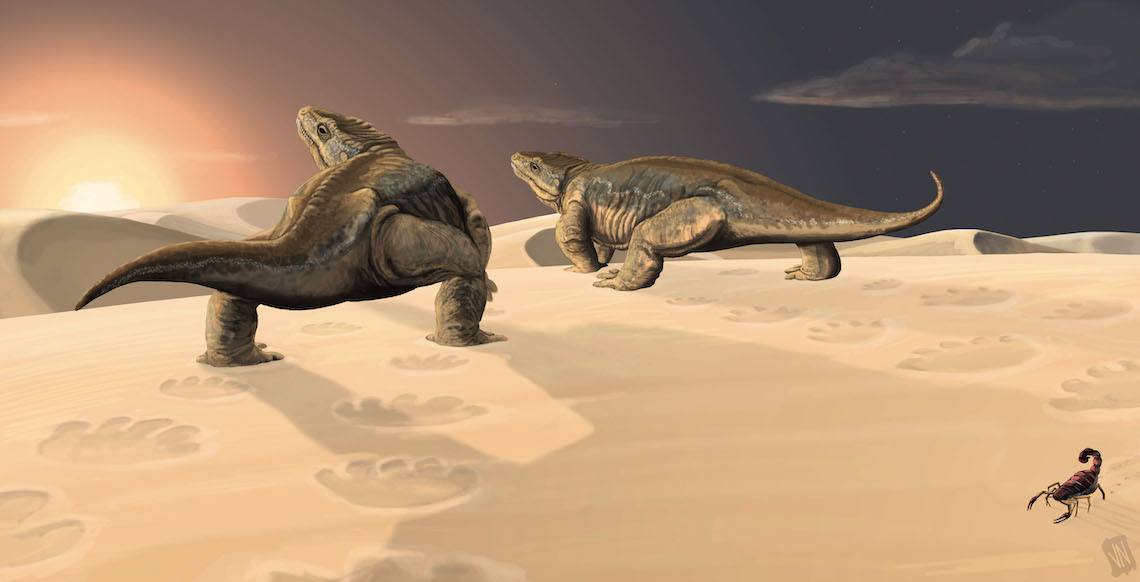 Francischini, who studies ichnofossils—traces of animal activity preserved in rocks—was first invited to examine the fossil footprints in 2017 while working under Lucas’s supervision at the New Mexico museum as part of his PhD. The tracks, associated with the genus Ichniotherium, were produced by adult and juvenile animals that had five clawless toes. The footprints vary from 11 to 37 centimeters in length, suggesting that the animals could have been over a meter long. This type of footprint is commonly found in Europe and less frequently in North America and Africa. 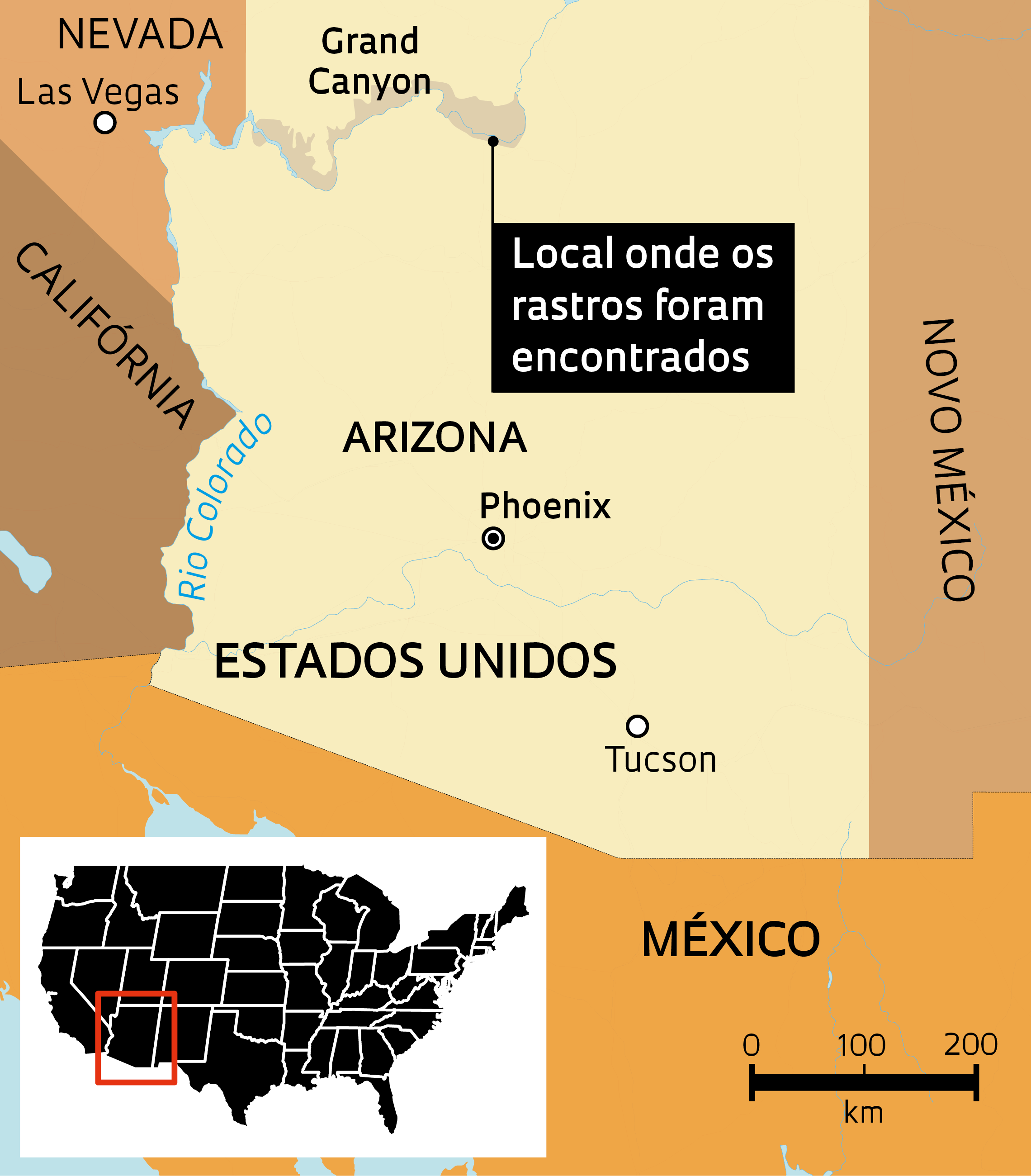 Common ancestor
If corroborated by other similar findings, the discovery of these tracks in a desert could lead to a review of how diadectomorphs are classified. The group has already been subject to numerous reevaluations as more and more evidence about them continues to be found. They are currently considered the closest relative of the early amniotes, which emerged around 350 million years ago. The two groups are seen as very close in evolutionary terms and likely descended from a common ancestor. Each line followed its own distinct path, however, and only the amniotes developed the ability to reproduce away from water. At least, this is the classical interpretation. “The presence of diadectomorphs in an arid environment means they probably had to have been able to reproduce like amniotes do today, either by giving birth to their offspring or by laying eggs with a hard shell,” says paleontologist Juan Carlos Cisneros of the Federal University of Piauí, who studies reptiles from the Permian and Triassic periods and did not participate in the study of the fossil footprints found in Arizona. “However, no hard-shelled eggs from this group of animals have ever been found. So the question remains open.” There is another possibility: today there exist a number of anamniote amphibians that have adapted to desert environments and still lay shell-less eggs. Despite being unusual, this type of adaptation could also have occurred in the past.

Fossil finds in the Grand Canyon have been recorded as far back as 1918, one year before the national park was created. According to Vincent Santucci, coordinator of the US National Park Service’s paleontology program, such traces of the distant past are regularly discovered in this area of Arizona. “There is an abundance of fossil footprints in Coconino sandstone, suggesting that many vertebrates lived in this ancient desert,” says Santucci, who is a coauthor of the new study. “But none before now has ever resembled those of a diadectomorph.”

Scientific article
FRANCISCHINI, H. et al. On the presence of Ichniotherium in the Coconino Sandstone (Cisuralian) of the Grand Canyon and remarks on the occupation of deserts by non-amniote tetrapods. Paläontologische Zeitschrift. May 13, 2019.