On January 1, 2019, staff on shift at NASA celebrated not only the arrival of the new year, but also of something else they had been anxiously awaiting: the first images of asteroid 2014 MU69, also known as Ultima Thule, which is 33 kilometers (km) long, 16 km wide, and formed of two spheres that make it look something like a giant peanut. Ultima Thule, which in Latin means “the most distant place in the known world,” is currently 6.5 billion km from Earth and 1 billion km beyond Pluto, which has now been demoted to a dwarf planet, a category that describes spherical bodies that orbit the sun, but are too small to be planets.

Ultima Thule is the most distant object identified by the New Horizons probe, which left Earth in January 2006. It orbits in a dark, icy region so far away that the images take 10 hours to reach Earth. Known as the Kuiper belt, this peripheral zone is home to thousands of asteroids and dwarf planets created when the solar system was formed 4.6 billion years ago. Beyond this belt, according to some astrophysicists, is the intriguing—and still hypothetical—Planet Nine, which cannot be observed by current telescopes because it reflects almost no light from the sun. Its name comes from the fact that if it exists, it would be the ninth planet in our solar system, a position held by Pluto until 2006. For now, its existence can only be speculated on as a result of indirect evidence: the orbits of about a dozen of the approximately 3,000 rocky objects identified in the Kuiper belt, called transneptunian objects (TNOs), are curiously aligned. Composed of the same materials that formed Earth and the other planets in the solar system, these blocks of rock and ice can take up to 4,000 years to complete their orbit around the Sun.

“The best explanation for the aligned orbits of these TNOs is the gravitational interference of a distant planet,” says astronomer Rodney Gomes, a researcher at the Brazilian National Observatory (ON) in Rio de Janeiro. Since 2003, he has been part of the international search for Planet Nine, which can only be given an official name if the International Astronomical Union one day confirms its existence. The orbits of these TNOs in the Kuiper belt cannot be explained by the gravitational pull of Neptune, the eighth and last known planet in the solar system.

On average, Neptune is 30 astronomical units (AU) from the Sun (one AU is equal to the average distance between the Earth and the Sun—almost 150 million km). Planet Nine is probably similar in mass to Neptune, gaseous, and much farther away. Its orbit would have an inclination of around 30 degrees, unlike the rest of the planets in the Solar System, which all lie more or less on the horizontal plane. 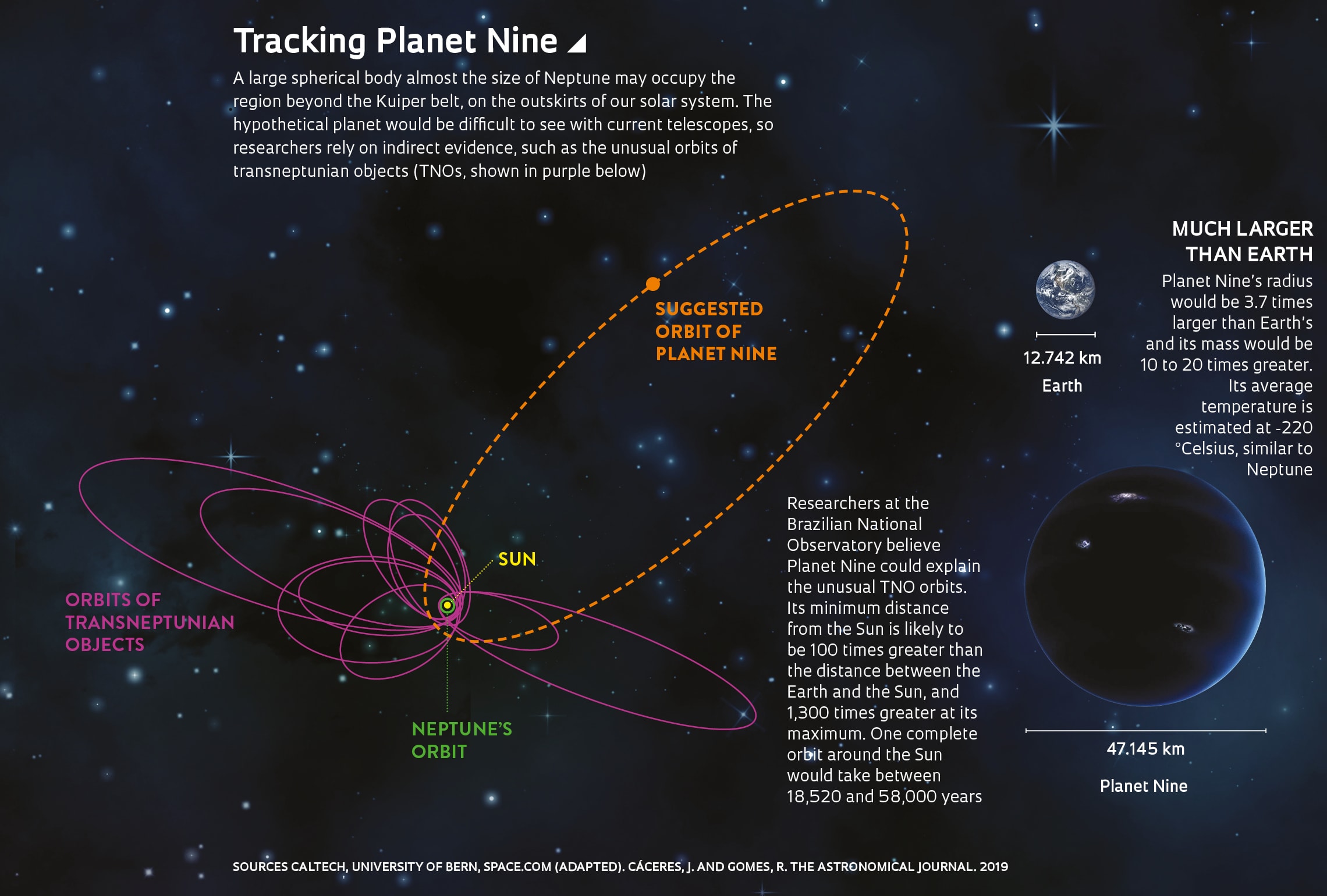 In an article published in the Astronomical Journal in October 2018, physicist and PhD student Jéssica Cáceres and her advisor Rodney Gomes concluded that based on the unusual orbits of the TNOs, Planet Nine could have a perihelion (the minimum distance from the Sun during its entire orbit) of 100 AU, and an aphelion (the maximum distance) of 1,300 AU. If this estimate is correct, one complete revolution around the Sun would take somewhere between 18,520 and 58,000 years.

This theory differs from the most widely accepted proposal, published in the Astronomical Journal in 2016 by three astronomers from the California Institute of Technology: Elizabeth Bailey, Konstantin Batygin, and Michael Brown. According to them, Planet Nine’s orbit likely ranges from 200 to 1,500 AU. For now, there is no consensus on which theory is more accurate, but ON researchers argue that even with a smaller perihelion, Planet Nine could be responsible for the clustering of other rocky bodies in the Kuiper belt.

Gomes first simulated the orbit of this hypothetical planet in 2005 and 2006 with John Matese, from the University of Louisiana, USA, and NASA’s Jack Lissauer. In 2015, together with Jean Soares Choucair, currently at the Federal University of Minas Gerais (UFMG), and Ramon Brasser, from the Tokyo Institute of Technology, he examined Planet Nine’s influence on centaurs—TNOs whose perihelion is inside the orbit of Neptune. “Our mathematical model explained some phenomena, such as the orbits of distant centaurs, but it interfered with the closer centaurs, which was undesirable,” says Gomes.

The origin of Planet Nine is unknown. It could have been formed closer to the Sun and ejected from its original orbit by Jupiter and other giant planets; captured from the orbit of another star that passed near the Sun; or, somewhat less likely, it may simply have formed where it currently resides. 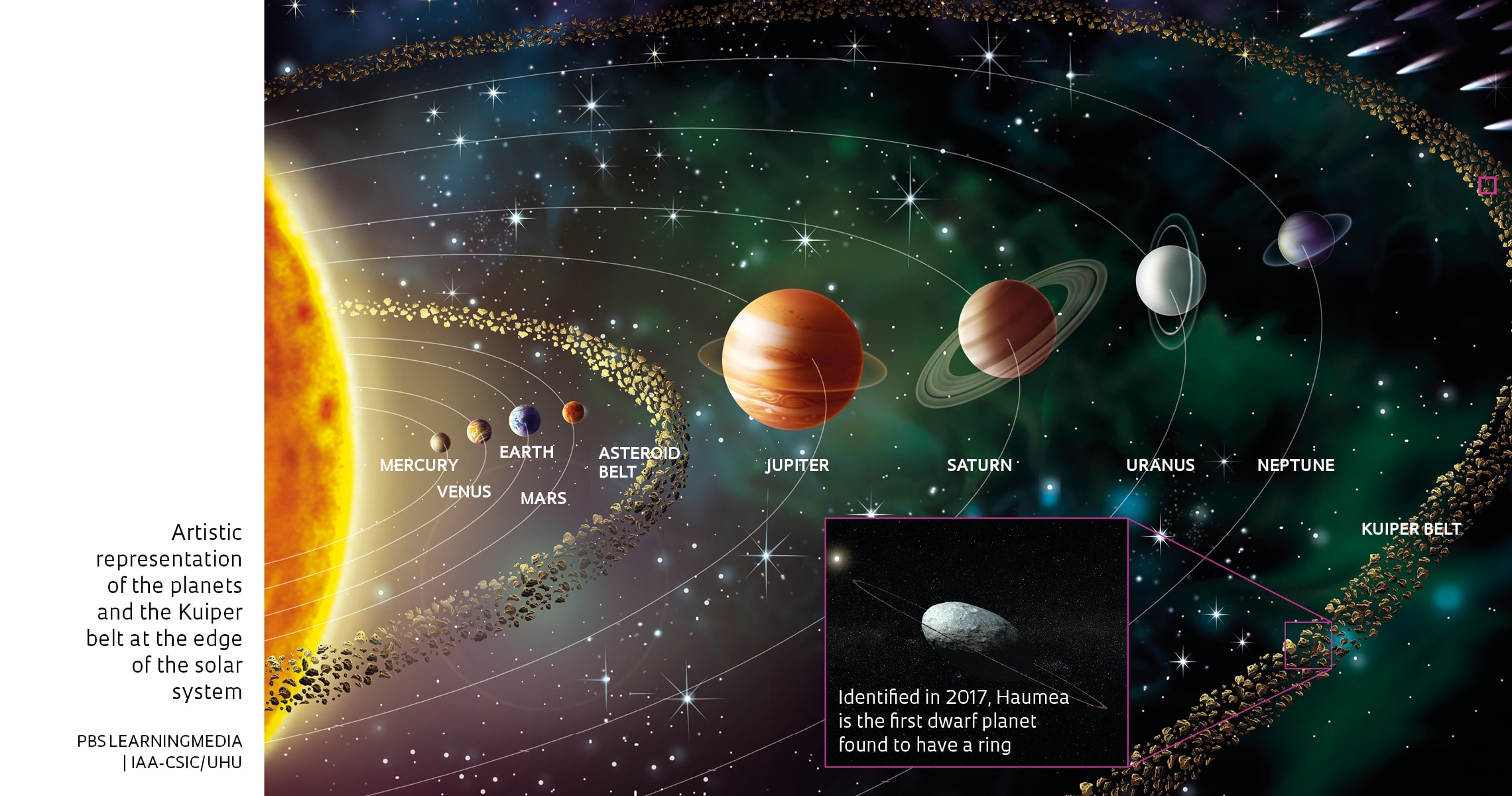 Despite the search for evidence that Planet Nine exists, there are some who believe that there is another explanation for the abnormal orbits of the TNOs. In an article published in the International Journal of Astrophysics and Space Science in February 2018, Robert Brown and Scott R. Dahlke of the United States Air Force Academy argued that most TNOs, including those with unusual orbits, may have followed their current orbits for just a few million years after escaping Neptune’s gravitational pull. In an article published in the Astrophysical Journal on January 21, Antranik Sefilian, from the University of Cambridge, UK, and Jihad Touma, from the American University of Beirut, proposed that a disk made up of small icy bodies with a combined mass 10 times greater than Earth’s could be shepherding the aligned TNOs.

Dark energy
If confirmed, the discovery of Planet Nine would be reminiscent of that of Neptune, another planet whose existence was first suggested based on deviations in the orbit of another celestial body (in this case, Uranus) before it was actually observed. The problem is that seeing it with current observational technology is no easy task. “The area being searched for Planet Nine is too distant, dark, and wide to be scanned by current telescopes,” says ON astronomer Márcio Maia. “It is like the planet is on a highway with hundreds of lanes, and we do not know which lane it is going to be on or when.”

Maia and other researchers from Rio de Janeiro and São Paulo participate in the Dark Energy Survey (DES), an international project that aims to map the visible objects of the universe, such as galaxies and stars, in search of dark energy, and helped discover TNOs. Based on 4.2 million DES images, two ON astronomers, Júlio Camargo and PhD student Martin Banda-Huarca, recalculated the orbits of 202 TNOs and centaurs, 63 of which were discovered by the DES. Described in an article accepted for publication in the Astronomical Journal, their research was supported by the Interinstitutional e-Astronomy Laboratory (LINEA), run by the e-Universe Institute for Science and Technology.

In 2017, a Brazilian team led by Roberto Vieira Martins, also of the ON, was involved in the discovery of rings around Haumea, one of the five known dwarf planets (the others are Ceres, Pluto, Eris, and Makemake). Unlike Pluto, Haumea probably does not have an atmosphere. It takes 284 years to complete one orbit around the Sun and has a rotation period of about four hours, faster than any other known body in the solar system with a diameter of more than 100 km. Due to its fast rotation, it is shaped like an American football. Haumea is the first dwarf planet and TNO found to have a ring, which is about 70 km wide and has a radius of 2,200 km.

The Brazilian group helped to predict the dwarf planet’s passage in front of a star and interpret the data collected during the observation in partnership with teams from several other countries; when seen from Earth, a stellar occultation enables scientists to improve orbit calculations and determine the dimensions of a celestial object that itself creates no light. A group led by Jose Luis Ortiz, from the Institute of Astrophysics of Andalusia in Spain, monitored the phenomenon from 12 European telescopes. According to Camargo, between three and ten of these events are observed each year, and help us to learn more about space beyond Neptune. “Because of the difficulty observing this region of the solar system,” says Maia, “it has often been forgotten.” The New Horizons probe will continue studying the Kuiper belt until at least 2021.