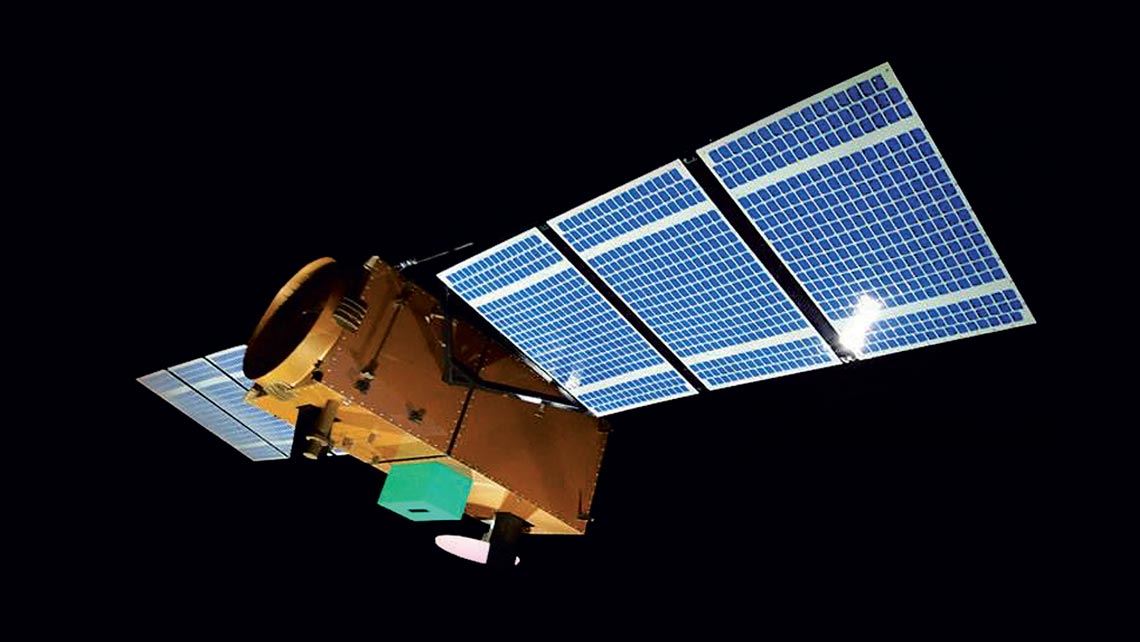 Illustration of the satellite, whose mission will be to monitor deforestation of the Amazon rainforest

Twelve years after the project began, the Brazilian satellite Amazonia-1 is ready to be put into orbit. It will be launched on February 28 from the Satish Dhawan Space Center in southeastern India on board a Polar Satellite Launch Vehicle (PSLV) made by the Indian Space Research Organisation (ISRO). The satellite was developed by the Brazilian National Institute for Space Research (INPE) with support from Brazilian businesses and the Brazilian Space Agency (AEB).

Amazonia-1 is the first Earth observation satellite fully designed, integrated, tested, and—if the launch is successful—operated by Brazil. It is also the first entirely Brazilian highly complex space system, according to Adenilson Roberto da Silva, the INPE researcher who led the project. “This demonstrates that we are able to implement the entire development cycle of satellites of this size and complexity,” highlights the scientist.

Shaped like a parallelepiped, Amazonia-1 weighs 640 kilograms (kg) and measures 2.5 meters (m) long by 1 m wide and 1 m deep. Previously, INPE has developed SACI scientific satellites to carry out experiments in space and data collection satellites (the SCD family), which are classified as meteorological satellites. It also worked in partnership with China on the China–Brazil Earth Resources Satellites (CBERS), designed for Earth observation (see infographic).

Amazonia-1, explains Silva, is larger and much more technologically complex than the SACI and SCD satellites launched in the 1990s, while the CBERS satellites belong to a different category, weighing in at almost 2 tons.

Aerospace expert Vivaldo José Breternitz, from Mackenzie Presbyterian University, says Amazonia-1 is a milestone for the country. “Never has a satellite of this size been fully designed and built in Brazil. What happened previously was technologies were acquired or partnerships established with other countries,” he points out. “It is an important step for Brazil to achieve autonomy in an area where its participation is still small.”

The objective of Amazonia-1, the first of three remote sensing satellites planned under the Amazonia Mission, is to capture images to monitor the country’s natural resources, especially the Amazon rainforest. It will join the CBERS-4 and 4A satellites in providing data to INPE’s Real-Time Deforestation Detection System (DETER), which issues deforestation alerts. It will also be used to support agricultural activity and monitor coastal zones and environmental disasters.

The new satellite will be positioned at 752 kilometers (km) altitude and will travel at 7.5 km per second in the direction of the north and south poles. It will take 100 minutes to orbit the the Earth, flying over the same point of its surface every five days. “On demand, Amazonia-1 will be able to provide data from any specific location on the planet within two days, which is a very short time,” explains Silva.

With 14,000 electrical connections and six kilometers of wires, the satellite is composed of two independent structures: the payload module, which houses the camera and equipment for recording and transmitting image data, and the service module, called the Multi-Mission Platform (MMP). Created by INPE, the MMP is a generic platform for satellites in the 500–700 kg class that provides the resources needed to operate the device in space. It houses subsystems for propulsion (the satellite engine), attitude and orbit control, and energy supply, among others.

One of the technological benefits for Brazil is the opportunity to validate the MMP, which will debut in Amazonia-1, in a real-world application. It is hoped that its use in future satellites will reduce development costs and lead times. The solar panel and its opening mechanism—which on the CBERS satellites was supplied by the Chinese—and the propulsion subsystem, which was funded by the FAPESP program Research for Innovation in Small Businesses (RISB, or PIPE in the Portuguese acronym), are other components that had never been made in Brazil before. The solar panel was supplied by Cenic Engenharia and the opening mechanism and propulsion system by Fibraforte, both from São José dos Campos (SP).

Amazonia-1 also consolidates Brazil’s knowledge of the full development cycle of three-axis stabilized satellites, which can adjust their position and orientation in relation to the Earth while in orbit, allowing them to better focus on specific locations. The SCD satellites, for example, are stabilized by rotation and turn around their own axis like a spinning top. “They are always directed at the same point and it is not possible to reposition them to monitor an environmental disaster,” explains Silva. Since Amazonia-1 is stabilized on three axes, it can aim its camera anywhere on the planet to capture the desired images.

The camera is a wide field imager (WFI), designed to take images of an 830 km area with a resolution of 64 m. It was built by São Paulo–based companies Equatorial Sistemas and Opto Eletrônica.

“The satellite shows great potential for domestic production. There was a major effort to manufacture components and subsystems in the country,” says Silva. INPE invested approximately R$380 million in its development, 70% of which was directed to the 10 Brazilian companies participating in the initiative (see Pesquisa FAPESP issue no. 239).