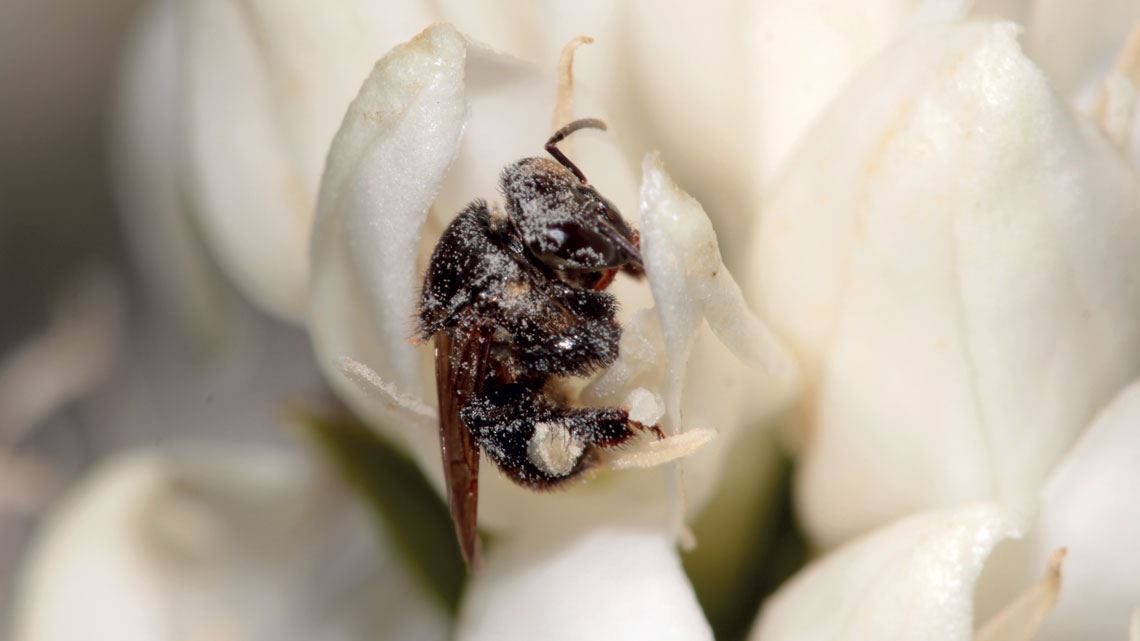 Brazilian startup AgroBee’s work in Brazilian agriculture was inspired by the dynamics of urban life. Nicknamed the Uber of bees, the agritech from Ribeirão Preto in the interior of São Paulo offers a similar service to the ride sharing app, but connecting farmers and bee breeders instead of drivers and passengers. The objective is to enable and encourage assisted pollination, a sustainable practice where pollinating agents—in this case, bees—are introduced into the environment to increase crop productivity.

The startup, funded by FAPESP’s Research for Innovation in Small Businesses program (RISB, or PIPE in Portuguese), works with more than 200 farmers in nine Brazilian states (Bahia, Ceará, Espírito Santo, Goiás, Mato Grosso do Sul, Minas Gerais, Paraná, Rio Grande do Sul, and São Paulo) and 60,000 hives owned by partner beekeepers. Rural producers are connected to hive suppliers through an application that bears the company’s name. AgroBee acts as an intermediator to the relationship and takes a 30% cut of the fee paid to the beekeeper by the farmer.

The startup, however, is not a mere spectator in the process. “When a farmer requests the service, our team assesses their crops to determine which species of bee is most suitable and how many are needed. We also identify where on the farm the hives should be installed for the best results,” explains Andresa Berretta, a pharmacist, biochemist, and cofounder of AgroBee. “With a plan in place, we get in touch with the bee breeders nearest to the farm to facilitate logistics, reducing stress for the animals, costs, and environmental impacts, since shorter distances generate less carbon emissions,” she concludes.

A 2015 study by researchers from the University of São Paulo (USP) and the Federal University of Ceará (UFC) found that of the 141 most commonly grown Brazilian crops, 85 (60%) depend on animal pollination. “This is because some plants are highly dependent on cross-pollination, where pollen has to be exchanged between genetically different plants—the ‘job’ of the bees. This is true for passion fruit, melon, and apples,” explains Cristiano Menezes, a biologist from the Brazilian Agricultural Research Corporation (EMBRAPA), which has a working partnership with AgroBee. “For these crops, there is no production without bees or other pollinating insects.”

Other plant species, continues Menezes, can produce fruit via self-pollination, by using their own pollen. These are called autogamous plants, examples of which include coffee, soy, tomatoes, and strawberries. “In these cases, farmers can grow their product without bees. Cross-pollination, however, increases the amount of fruit and seeds. Production is fine without bees, but with them, the yield is greater and the quality can be higher.”

The USP/UFC research estimated that pollinators contribute roughly US$12 billion to Brazilian agriculture per year, equivalent to 30% of the country’s annual production value for crops that rely on pollination. 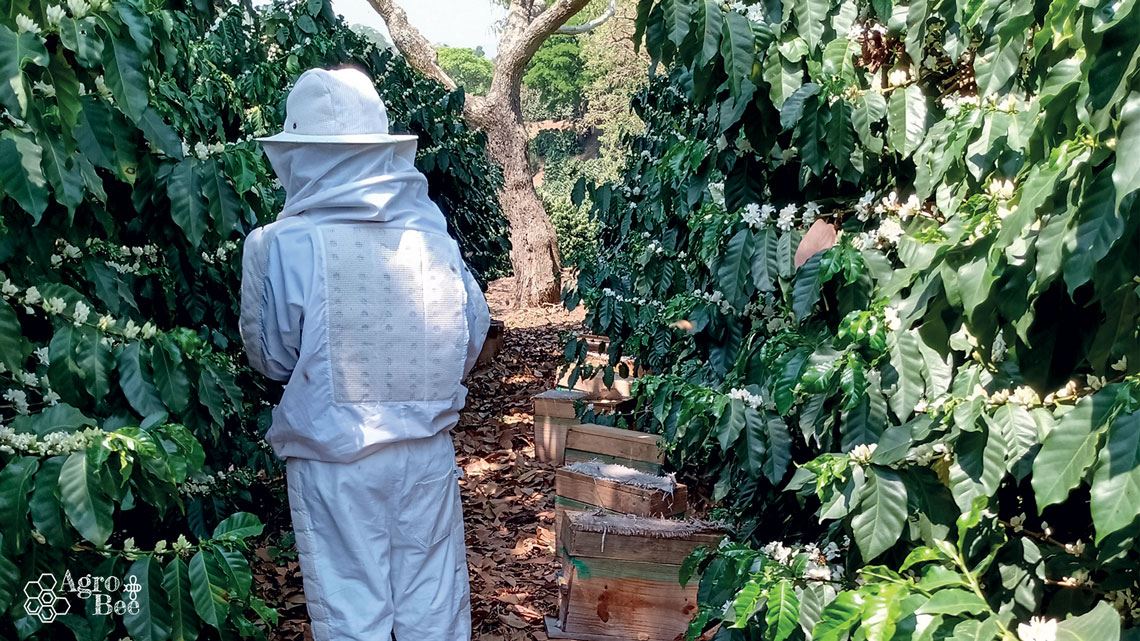 Installation of bee hives at a Coffea arabica farm in the municipality of Três Pontas, Minas GeraisJoyce M. V. A. Dias / Agrobee

Mutual benefits
As a pioneer in Brazil’s assisted pollination market, AgroBee has already received two funding packages from AgroVen, an investment club that aims to foster innovation in the field. “We strive to invest in innovative projects that combine productivity and sustainability. AgroBee caught our attention in this regard. We want to help the company establish and expand the assisted pollination market in Brazil,” says Silvio Passos, chairman of the board at AgroVen.

According to Passos, one of the startup’s biggest challenges is convincing rural producers that assisted pollination will be beneficial and profitable. Another is persuading beekeepers that it is worth investing in raising the insect for pollination and not just to make honey, propolis, and other byproducts.

“In general, beekeepers sell their product at a specific time of year, and after that their only costs are to maintain the hives. Our proposal is to fill this calendar deficit by renting out their bees,” says Berretta. “Stingless bees in particular produce little honey but are excellent pollinators for certain crops. Thanks to assisted pollination, one stingless bee breeder in our network tripled his number of bees in two years.”

The company recently entered into a partnership with the Telecommunications Research and Development Center (CPQD), in Campinas, São Paulo, with the objective of combining artificial intelligence (AI) and the Internet of Things (IoT) to automate pollinator recruitment and improve hive performance. The aim is for beekeepers to be able upload photographs of their hives’ brood frames to the AgroBee app, which will instantly analyze them and identify if they look good enough and ready to be taken into the field. The research is funded by the Brazilian Agency for Industrial Research and Innovation (EMBRAPII) and the Brazilian Support Service for Micro and Small Businesses (SEBRAE).

“Our job was to capture a huge volume of images to feed a deep learning model that used computer vision to assess the quality of bee brood frames,” explains Norberto Alves Ferreira, head of IoT and AI Solutions at CPQD. With the automated tool, AgroBee’s technical team will no longer need to physically travel to audit each hive installation. “This will allow us to work with more properties in less time, even in remote parts of the country,” says Berretta,

who had the idea of creating AgroBee after she participated in an entrepreneurship and innovation course run by FAPESP and Newton Funding in 2015. “I’ve been working with bee products, specifically propolis, for 20 years. Alongside 11 other entrepreneurs, I was selected by FAPESP to study at the Royal Society in London, where I met IT [information technology] engineer Guilherme Sousa. We got together with Carlos Pamplona Rehder, who worked with me at ABEMEL [Brazilian Association of Honey Exporters], and started looking for ways to offer professional pollination based on industry 4.0 technologies,” explains the AgroBee cofounder. “Later, Daniel Gonçalves, a specialist in business administration, joined us to give the company some greater experience.”

After more than a year of research and data collection on the topic, the company began to get off the ground. In 2017, AgroBee obtained approval from FAPESP for a Phase 3 RISB project, the focus of which is to make commercial and industrial products viable based on studies already carried out.

Another person who played an important role is EMBRAPA’s Menezes. “In 2016, I coordinated a RISB project for a stingless bee biofactory called Promip. With funding from FAPESP, we reached a production ceiling of 40 colonies per month, which is insufficient for scaling up,” he explains. “When we were finishing the project, I went to a conference with Carlos Rehder. We drove 700 kilometers together, exchanging experiences. I told him about Promip and he told me about soy pollination. In the middle of this conversation, we realized that while we may not ready to build a biofactory of sufficient scale for Brazilian agriculture, a system for organizing existing beekeepers to meet this demand might work,” recalls Menezes. 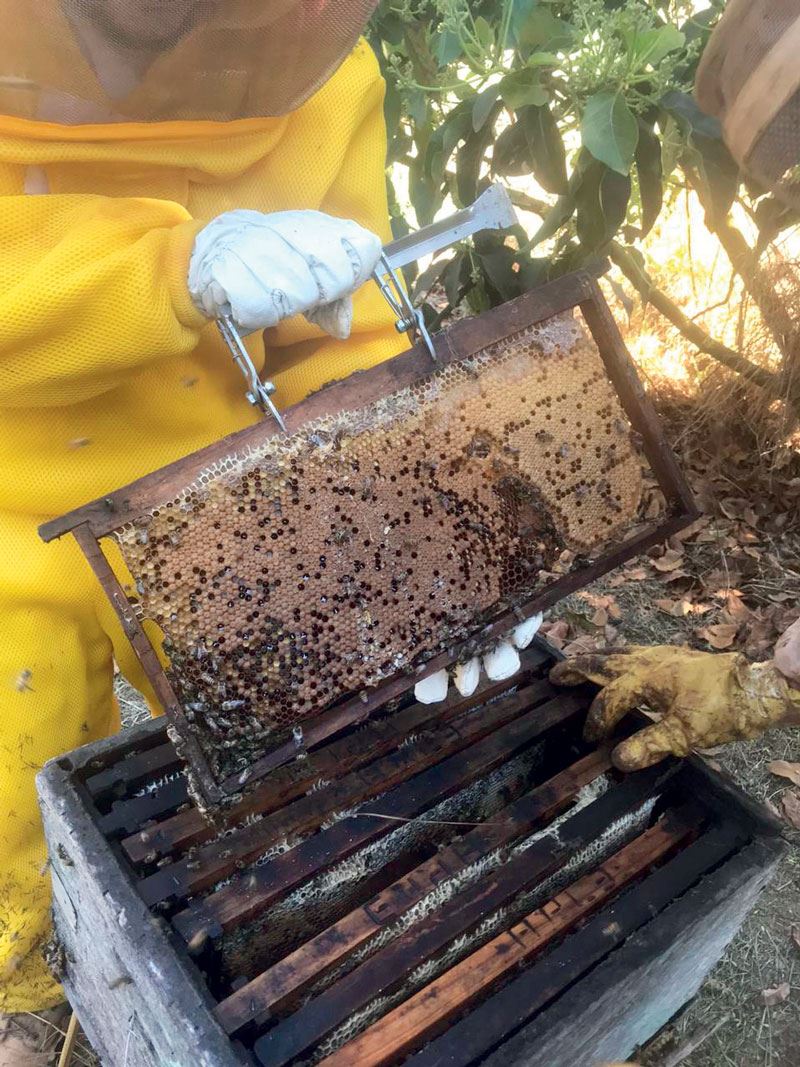 Clean operations
Lionel Segui Gonçalves, a biologist, bee genetics expert, and retired professor from USP, Ribeirão Preto campus, it is important to raise awareness of assisted pollination because it is a clean method that uses no pesticides or chemical products. “I participate in meetings of the International Federation of Beekeepers’ Associations [Apimondia] every two years and at the last five events, the main topic has been the death of bees due to the indiscriminate use of pesticides,” he warns. One of AgroBee’s goals is to raise awareness among rural producers of the importance of bees to agriculture. “We make it clear that with the presence of bees, crop productivity will be greater. The more rational use of pesticides is a logical consequence,” Berretta says.

Menezes points out that introducing bees into the field is beneficial in several ways because they increase genetic crosses between plants by carrying pollen from one flower to another, strengthening biodiversity. The EMBRAPA researcher also notes that well-pollinated plants are stimulated to produce more hormones, improving the quality of the fruit. “With strawberries, we saw that the amount produced does not increase, but the fruit is bigger, better formed, and sweeter. They have a stronger skin and longer shelf life. The same goes for tomatoes and other crops,” he says.

Even crops that do not rely on bees for production, such as coffee plants, can benefit from AgroBee’s services. “Coffea arabica is a self-pollinating species, but after introducing bees, we observed an average productivity increase of 20% due to the benefits of cross-pollination,” says Menezes. “Furthermore, analysis of the coffee made with beans pollinated by the bees we introduced showed a three-point increase in quality. In other words, the flavor of the fruit was improved.”

The increased quality of the coffee could be a result of the homogeneity of the beans, hypothesizes Berretta. “With several plants being pollinated by bees at the same time, there are fewer differences in crop maturity at harvest, increasing the percentage of beans with the same appearance and characteristics,” says the AgroBee researcher.

Scientific article
GIANNINI, T. C. et al. The dependence of crops for pollinators and the economic value of pollination in Brazil. Journal of Economic Entomology. May 4, 2015.