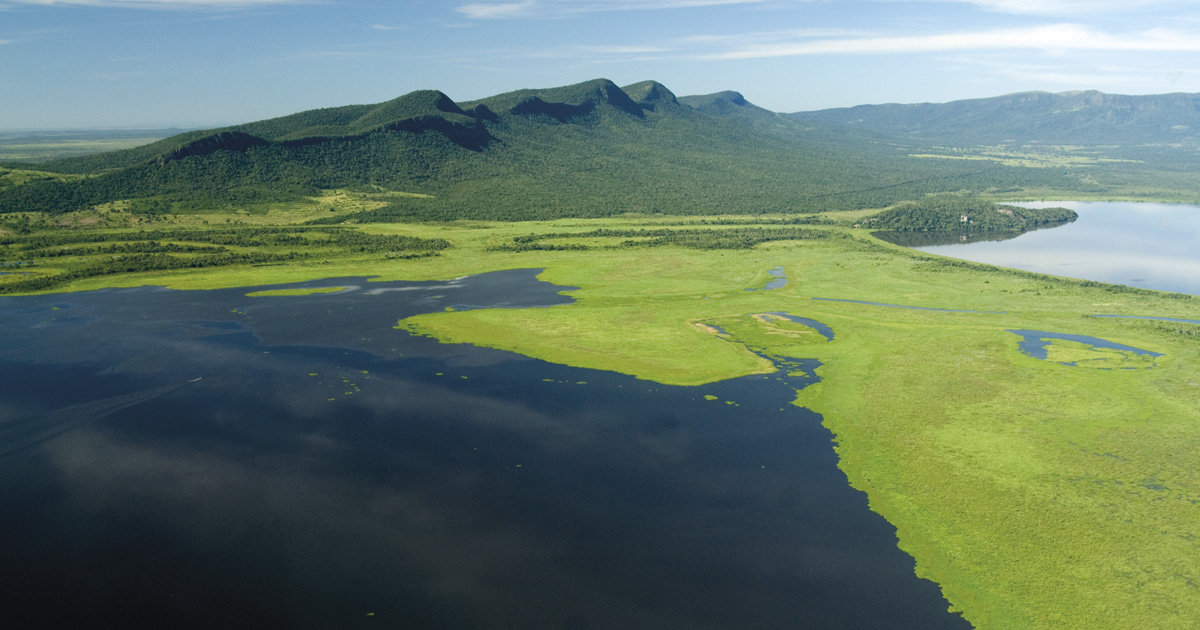 Heavy rains and flooding do not seem to cause problems in the Pantanal, with its extensive flooded areas full of plants and animals that are adapted to water, such as alligators, jabiru storks, otters, kingfishers, piranhas, the cambará tree (Vochysia divergens Pohl), and water hyacinths, not to mention cattle and horses. But that is not entirely accurate, according to biologist Ivan Bergier of the Pantanal unit of the Brazilian Agricultural Research Corporation (EMBRAPA). “The summer rains are becoming concentrated into fewer days,” he says. This could affect the course of the rivers on the plains, which he describes as rebels that spread when the marginal levees break. The effect of this dynamic on the animals in the swampland plains has not yet been studied, but research already indicates potential consequences.

Bergier surveyed the rainfall recorded between 1925 and 2016 and found that the quantity does not show a tendency to increase or decrease, according to an article published this year in the journal Science of the Total Environment. Despite variation from one year to the next and between decades, the average volume of rainfall in summer is still just over 600 millimeters (mm) per year. The problem is that the average number of rainy days is decreasing: from approximately 43 days in 1925 to 32 in 2016. As a result, the average rate of precipitation on these days jumped from 14 mm per day at the beginning of the studied period to 19 mm per day by the end. This means that increasingly torrential rains are becoming frequent and can drag a greater volume of sediment from the plateau (where the rivers originate) to the plains, silting the rivers, which run in shallow trenches lined by banks made of the sediment the rivers carry. These natural dikes face a greater risk of breaking because of the combination of accumulated sediments and torrential rains, which now flood areas that used to be wet only in the flood season for longer periods of time. An example of this process is seen in the work of the group led by geologist Mario Assine of São Paulo State University (UNESP), Rio Claro campus, which showed that the course of the Taquari River forms fluvial fans that change over time (see Pesquisa FAPESP, issue no. 227).

Between December and March, when rains fill the plains with water, the risk of larger floods can rule out beef ranching in the region. He adds that the amount of sediment carried by the rivers increases when soil is poorly used in the highland areas. Investment in agroforestry systems, which add trees to areas where cattle graze, could help mitigate the consequences of severe rains (see Pesquisa FAPESP, issue no. 192). Bergier warns that the winter droughts could become longer, interrupted by torrential rain.

Water that comes from afar
In a study published this year, Bergier observed a strong correlation between temperature increases and higher rates of precipitation on rainy days. And the trend is becoming increasingly hotter, as shown in research by a study group led by climatologist José Marengo of the Center for Natural Disaster Studies and published in 2016 as a chapter in the book Dynamics of the Pantanal Wetland in South America, edited by Bergier and Assine. The estimate, based on global climate models from the Intergovernmental Panel on Climate Change (IPCC) in 2014, indicates that average temperatures in the Pantanal could increase between 2 degrees Celsius (°C) and 3°C by 2040, and 6°C by the end of the century.

“In 2016 the connection between the rains in the Pantanal and the Amazon had not yet been established,” warns Bergier. He explains that this is far from being a local phenomenon: increases in torrential rains (as seen in the 1970s and 1980s) are associated with changes in atmospheric circulation, partly induced by the rise in the planet’s average temperature. The results indicate that a good part of the water that falls in the Pantanal comes from the Amazon, and is therefore subject to changes occurring in the rainforest. “The ‘flying lake’ that comes from the Amazon falls more forcefully in the Pantanal when the winds are slower,” Bergier adds. “When the atmosphere transports moisture more quickly, the rains tend to fall farther south in South America.” These observations and studies reinforce the fact that deforestation and drought in the Amazon decrease the volume of precipitable water exported to other regions (see Pesquisa FAPESP, issue no. 226).

The rivers are no place for fish
The consequences of this change for life in the Pantanal, which is considered the best-preserved Brazilian biome with approximately 80% of its original vegetation still on the plains, have yet to be measured. The biologist José Sabino of UNIDERP University in Campo Grande, Mato Grosso do Sul, has observed the fish. “Twice over the past year, in the Miranda River I have seen spots over 1 kilometer [km] in which the river seemed to be boiling,” he says. “There were thousands of fish stopped, unable to move, like a great traffic jam.”

An out-of-season storm had signaled the fish to spawn at the wrong time, calling the fish to set off on reproductive migrations of up to 300 km to the headwaters of the rivers where they lay their eggs. Every year, heavy rainfall stimulates migratory fish like the dorado (Salminus brasiliensis), piraputanga (Brycon hilarii), streaked prochilod (Prochilodus lineatus), and piau (Leporinus spp.) to begin this journey. Regular rains provide full rivers that allow them to go on their way. Once they reach the plateau they reproduce, and the fish go back down the rivers. “The plains and the headwaters must be connected,” says Sabino.

But with the silting of the rivers caused by excessive sediment transport after torrential rains, this is not guaranteed. And the problems do not end there. “The fine sediment is devastating, it permeates the rivers and occupies spaces where small invertebrates, insect larvae, and small shrimp are found,” he adds. Without these invertebrates, many fish do not have their usual food. “It’s like paving over the backyard: it makes a poor environment for the biota.” Sabino says there are no records of extreme weather events associated with the migrations in the past, or systematic data that could show how this could affect the frequency of reproductive migrations.

The jabiru stork, a symbol of the Pantanal, depends on flooded areas to surviveJoão Alexandrino / Unifesp

In the region, natural fluctuations combine with phenomena accelerated by human modifications and climate change. Over the last 30 years, the biologist Guilherme Mourão of EMBRAPA Pantanal has monitored fauna in the Pantanal, mainly in the lake region known as Nhecolândia, near the city of Corumbá (see Pesquisa FAPESP, issue no. 261). He started with fish, but noted that changes in the flooded areas affect a wide range of species.

One of them is the most emblematic, the jabiru stork (Jabiru mycteria). Mourão and his collaborators used nest counts taken during aerial surveys between 1991 and 2004 to develop a mathematical model connecting the number of nests with the extent of flooding. The results, published in 2010 in the journal Zoology, indicated that during dry periods like the 1960–1974 drought in the Pantanal, the population of these birds dropped dramatically, with approximately 220 nests per year estimated in the region compared with an average 12,400 nests during normal flood seasons. He also recounts that alligators and capybaras practically disappeared from the lakes on the Nhumirim Farm in Nhecolândia during the past decade, which was dryer. At the same time, land animals that used to be uncommon in this region appeared, such as the pampas deer. Over the past two years, the seasonal streams (known as corixos) reappeared and the lakes began to fill. “We will see if the animals most closely linked to the flooded areas come back,” says Mourão. This year has been especially rainy.

During the rainy season in the summer, the fields are flooded for months at a timeJosé Sabino / Uniderp

Life on land
An important factor in the interface between aquatic and terrestrial environments is riparian forests along rivers, which help fix sediment and provide some of the food consumed by fish, such as fruit knocked down by monkeys. In an area where the economic activity features nature tourism alongside farming, good practices for soil use cannot be neglected.

But vegetation has been lost, according to an article published this year by environmental engineer Ciomara Miranda of the Federal Institute of Mato Grosso do Sul in Aquidauana. She examined satellite images obtained in August of 2000, 2008, and 2015, always during the dry season, covering all of the nearly 140,000 km2 of Brazil’s Pantanal. Over these years, the area of the Pantanal covered with low brush has increased from 58% to 72%, while areas of dense vegetation have diminished from 37% to 21%. This change reflects deforestation and substitution of forest with pasture, extending the practice of farming in the region, which has been a tradition spanning three centuries. If the trend continues, by 2030 about 78% of the Pantanal is expected to be covered with low brush, and only 14% will be covered with dense forest.

By 2030, approximately 78% of the Pantanal wetlands are expected to be covered with low brush

Changes such as these are problematic for some native species in the region, such as armadillos. During her doctorate at the Federal University of Mato Grosso and in partnership with EMBRAPA Pantanal, Nina Attias examined the use of space by two species, the six-banded armadillo (Euphractus sexcintus) and the southern three-banded armadillo (Tolypeutes matacus), in three areas of the Pantanal. The six-banded armadillo weighs approximately 4 kilograms (kg) and regulates its activity according to the temperature. Day or night, it stays in its den when the temperature rises and waits for things to cool off before going out. The southern three-banded armadillo weighs only 1 kg, and protects itself by rolling into a ball; it prefers to move short distances at night and stays in when it is very cold, leaving its burrow earlier when necessary.

Attias showed that the two species have something in common: the need to transition between open and closed vegetation, since armadillos have a limited ability to regulate their body temperature. Consequently, the environment contributes to the need for these animals to maintain themselves at appropriate temperatures. “If the animals cannot choose their habitat, they have to adjust when they are active,” she explains. And if they can only be active during a short window of time, it becomes difficult for them to get enough food and even reproduce. “This puts the population at risk,” warns Attias, who will soon publish these results of her work in the journal Animal Behavior.

The six-banded armadillo is frequently found in the plains, and remains in its den during very hot periodsNina Attias / Institute for Wildlife Conservation

In addition to needing the forest, the three-banded armadillo is sensitive to changes in flooding patterns and river depth, since it cannot swim. According to Attias, this species may have disappeared from the Nhecolândia region during the major floods after 1974 and in the following decade. “What we are seeing in the armadillos is thought to be true for other mammals when there are more extreme climate events,” she predicts. “The animals need all the microclimates to ensure their mobility and activity.”