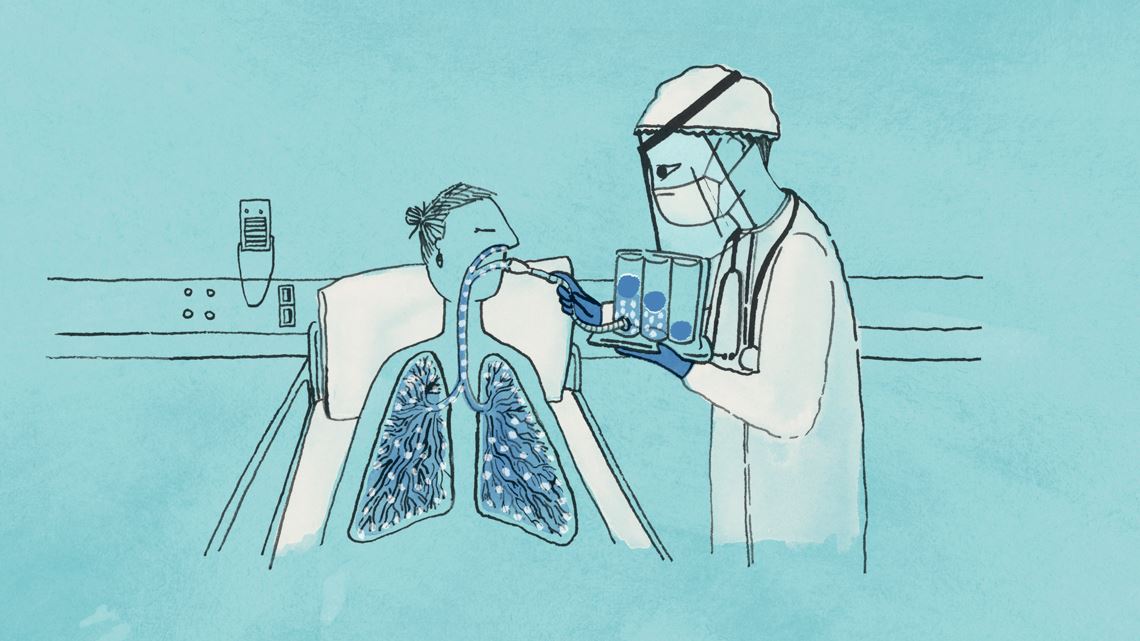 When it comes to treating and preventing the complications of respiratory disease, physiotherapists have proven essential since the first cases of COVID-19 were recorded, especially in hospital environments. The novel coronavirus often causes severe damage to the lungs, highlighting the need for specific training in this area, with approximately 3,000 physiotherapists in Brazil specializing in respiratory, cardiovascular, and intensive care.

“Even though this is a reasonable number under normal conditions, there has been a shortage of respiratory physiotherapists available during this pandemic, which demonstrates the need to continue training new professionals every year,” explains Elineth da Conceição Braga Valente, a physiotherapist and member of the Federal Council of Physiotherapy and Occupational Therapy (COFFITO). Training in the area, she says, starts at undergraduate level, with disciplines related to lung functions and dysfunctions, as well as the treatment of problems caused by respiratory diseases and prevention of future complications. Respiratory physiotherapy is an essential field of study. Professionals can complement their studies with training courses, specialist diplomas, and interdisciplinary residencies in the health area.

Just like medical degrees, the interdisciplinary residencies involve on-the-job training in practical and theoretical activities for an average of two to three years, under the guidance of experienced professionals. “In addition to these options, it is important that physiotherapists understand that their training must be ongoing, that they will always need to keeping learning in order to stay up-to-date with the sector as it evolves,” says Valente. In Brazil, it has been mandatory since 2010 to have at least one physiotherapist for every 10 beds in an Intensive Care Unit (ICU), available for at least 18 hours a day, according to a joint resolution published by the Brazilian Health Regulatory Agency (ANVISA) and the Brazilian Ministry of Health. A bill currently pending in the National Congress intends to extend this to 24 hours a day.

Physiotherapy courses, which are generalized in nature and aim to prepare students for a range of fields such as oncology, neurofunctional therapy, and orthopedic trauma, involve the study, prevention and treatment of disorders that affect the organs of the human body due to genetics, trauma, or disease. Specializing in the respiratory system began in the USA in the 1970s, when hospital-based professionals who were rehabilitating patients’ motor functions realized that exercise also improved their respiratory capacity. In Brazil, the field started growing in the 1980s.

Pediatrics
Therapies for diseases common in children, such as pneumonia and bronchiolitis
Outpatient
Treatment and relief of chronic diseases, such as asthma and pulmonary emphysema
Hospital
Practiced in hospital wards, emergency departments, and ICUs to prevent the onset of respiratory diseases and improve lung function
Home care
Post-hospitalization rehabilitation and treatment of respiratory disorders

“Physiotherapists then began using exercises that focused directly on the lungs, especially for obstructive diseases such as bronchitis and emphysema,” says Valente. The most common procedures include breathing exercises, assisted coughing and postural drainage, which helps to remove mucus from the lungs.

Hospital care
Since 2002, the Teaching Hospital (HU) at the University of São Paulo (USP) has offered a specialist course in respiratory physiotherapy in partnership with the Department of Physiotherapy, Speech Therapy, and Occupational Therapy at USP’s School of Medicine (FM). At 1,440 credit hours, equivalent to a year of learning, the course can be taken by students in the final year of their physiotherapy undergraduate degree or graduates.

“The program opens new opportunities to those who want to work in the hospital environment, an area that has grown in popularity in recent years,” explains Francisco Garcia Soriano, deputy coordinator of the course, which consists of theoretical and practical classes, including an internship in the adult, pediatric, and neonatal ICUs, as well as experience in the infirmary and home care program. It includes a range of disciplines, such as pulmonary physiology and pathophysiology, radiology, hospital and home physiotherapeutic equipment, postoperative physiotherapy, and invasive mechanical ventilation. “The ICU is only used for patients in critical condition who require close attention, so it is important that physiotherapists have experience in handling the equipment and monitoring people who have recovered their ability to breathe,” says Soriano. They can also opt to specialize in intensive care, which in addition to the respiratory tract, also involves the study of neurological and cardiovascular physiotherapy.

The duties of a respiratory physiotherapist include the use of complex devices, such as mechanical ventilators for sedated patients in a process known as orotracheal intubation. “In these cases, the physiotherapist shares responsibility for the patient with the physician,” notes Adriana Claudia Lunardi, a professor of the Graduate Program at City University of São Paulo (UNICID) and fellowship supervisor for USP’s physiotherapy course in the areas of hospital-based physiotherapy and breathing exercises. 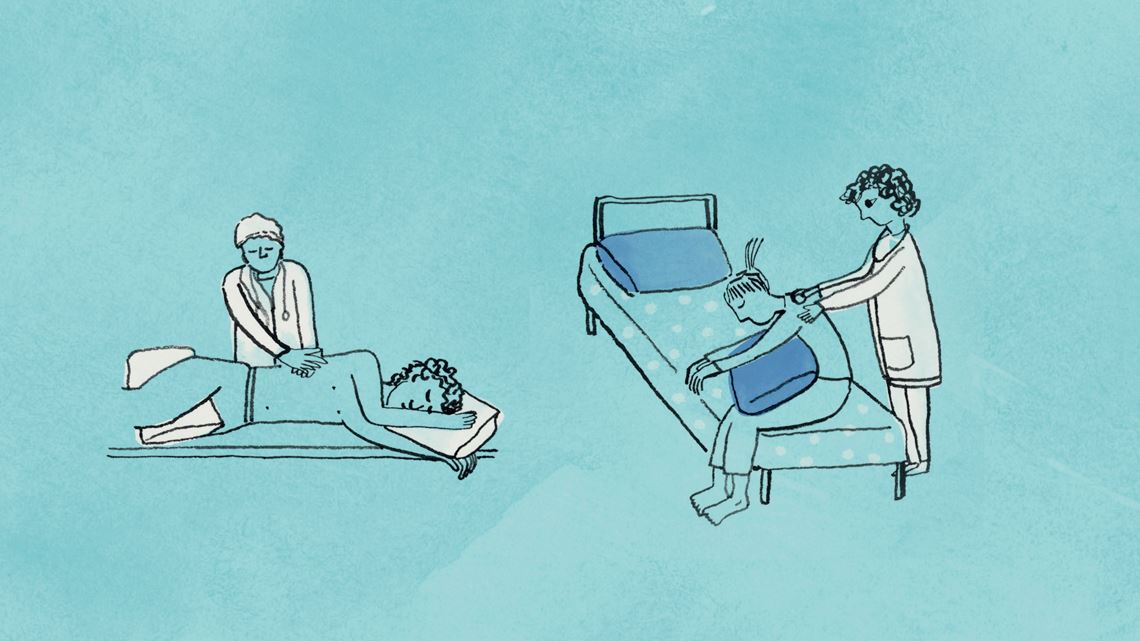 Sandra JáveraAs a supplement to specific medical techniques for treating chronic problems, respiratory physiotherapy also makes use of equipment for physical conditioning, such as treadmills and exercise bikes, as well as other simpler equipment, such as dumbbells and elastic bands. “As well as patients who have recently left the ICU and need to resume physical activity to strengthen their muscles and restore their respiratory capacity, the use of these devices is important for treating chronic diseases, such as pulmonary emphysema, asthma, and cancer,” adds Lunardi.

Studies in the field of respiratory physiotherapy, such as the research conducted by a team led by Clarice Tanaka and Bruna Rotta, have shown that having professionals with expertise in this area working in ICUs 24 hours a day can reduce hospital stays by up to 40%, as well as considerably reducing the costs and complications that can arise from remaining immobile for longer periods. “Extreme muscle weakness is one effect of being admitted to an ICU that can compromise the patient’s spontaneous breathing and functional capacity,” says Pedro Dal Lago, from the Department of Physiotherapy at the Federal University of Health Sciences of Porto Alegre (UFCSPA). During the gradual process of removing a mechanical ventilator—known as weaning—physiotherapists need to assess the patient’s respiratory musculature and develop a tailored exercise program to help them recover the ability to breathe.

On top of the greater demand placed by the current pandemic, the need for respiratory physiotherapists is growing as a result of an increasing life expectancy in Brazil and problems caused by pollution in major cities. “With the aging Brazilian population, diseases that affect the cardiovascular and respiratory systems are becoming more common, and respiratory physiotherapy is an important resource for improving people’s quality of life,” concludes Dal Lago.