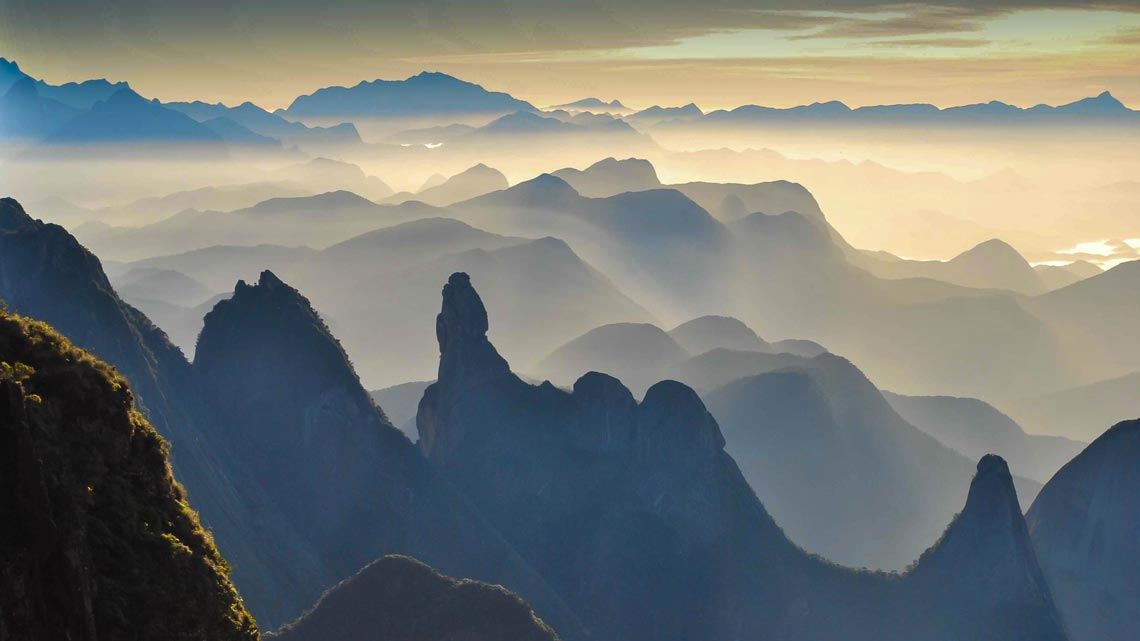 Dedo de Deus (center) in the Serra do Mar mountain range, which was once joined to the Mantiqueira Mountains, forming one large range

A study of erosion rates over the last 100,000 years is shedding light on the past and what may occur in the future of the Mantiqueira and Serra do Mar mountian ranges in South and Southeast Brazil. After determining how the terrain has shifted by examining the abundance of chemical elements in minerals collected at 24 locations in the region, geographer Daniel Souza, from the Institute of Energy and the Environment (IEE) at the University of São Paulo (USP), concluded that the rocks from mountains in the municipality of Ubatuba, on the north coast of São Paulo State, have the highest rate of erosion. This means that they have lost up to 100 meters (m) in height per million years—the equivalent of 1 centimeter every 100 year. Erosion in the Andes, by comparison, is ten times greater. This material is transported and accumulates on the coast, causing the beach to slowly expand inland. Millions of years from now, the coastal plain could be as wide as the municipality of Santos, which is also situated on the coast of São Paulo.

“Erosion of the mountains has decreased, but at the escarpments between the mountains and the coast, it remains as intense as it was millions of years ago,” points out Souza. An escarpment is a steep slope at the edge of a plateau, while the structure of a mountain range generally resembles an elongated prism. The geographer’s analyses indicated that erosion is more acute in the Serra do Mar, which is subject to near constant rainfall, than in the Mantiqueira Mountains, a neighboring mountain range located further inland, in the states of São Paulo and Minas Gerais. “The rivers and rains are eroding the edges of the plateaus and expanding the escarpments,” he concluded.

Described in the Journal of South American Earth Sciences in October 2020, Souza’s study reinforced existing evidence that coastal escarpments are receding by 10 kilometers (km) every 10 million years, and outlines what could happen in the future, with escarpments advancing inland and coastal plains expanding, while mountainous regions could be transformed into vast plateaus, unless other movements of the earth’s surface cause the mountains to rise up again or create new ones.

During his PhD at the Institute of Geosciences and Exact Sciences (IGCE) of São Paulo State University (UNESP), supervised by geologist Peter Hackspacher and funded by FAPESP, Souza used two techniques to analyze movements of the terrain in the mountainous region.

The first was thermochronology, which is used to estimate temperature variations in rocks inside the planet over time based on the decay rate (loss of mass) of radioactive chemical elements—the lower the temperature, the closer to the surface the rock was formed. Using this method, he examined the levels of uranium, thorium, samarium, and helium in six granite and gneiss samples, which he added to analyses made at 130 points in the region since the 1990s by Hackspacher and other researchers from Brazil and abroad.

The other technique he used was to measure isotopes of the chemical element beryllium (10Be), formed by the interaction between quartz and cosmic rays. The more beryllium-10, the lesser the erosion. Isotopes are variants of a chemical element that have the same number of protons, but different numbers of neutrons.

Souza presented an analysis of 18 sediment samples he collected from river beds in April 2019 in the journal Geomorphology, supplemented by 26 samples studied by geographer André Salgado, from the Federal University of Minas Gerais (UFMG), described in the Journal of South American Earth Sciences in February 2016.

Together, these studies detail the history of the Serra do Mar and Mantiqueira Mountains, which were shaped by constant movements of the surface and erosion caused by rivers and the climate—primarily by rainfall. As Earth’s continents separated, a process that began about 130 million years ago, the coastal mountains of South and Southeast Brazil and South initially formed one singular elevated region. They later grew even higher, reaching 4,000 meters altitude, twice as high as Pedra da Mina, the highest point in the region today, and then the two mountain ranges moved apart, forming the Paraíba Valley (see infographic).

Hackspacher highlights three consequences of this separation. The first is the formation of oil reserves in the Santos and Campos sedimentary basins, on the coast of the states of São Paulo and Rio de Janeiro. The second is the diversion of rivers. “The rising mountains blocked the course of the Paraíba River, which separated from the Tietê and started flowing towards the sea,” he offers as an example. The third is the separation of animal and plant communities, leading to the emergence of new species.

“Thanks to modern techniques, we are just beginning to confirm and describe the conclusions reached by Fernando Almeida [1916–2013],” acknowledges Hackspacker, who also received funding from FAPESP. An engineer from Rio de Janeiro who later moved into the field of geology, Almeida began examining the mountainous region of São Paulo State in the 1950s, proposing hypotheses on how it was formed, including the division of the mountain ranges.

“This region is a fascinating example of intraplate tectonic movement, which occurs in few places in the world,” says geologist Claudio Riccomini, from IEE-USP and USP’s Geosciences Institute, who has been studying the region since the 1980s. “In addition to the climate,” he says, “tectonic movements also have a strong influence on the terrain and erosion, even in the last 20,000 years.” Riccomini participated in a study published in the Journal of Seismology in May 2018 that recorded more than 20 potentially active geological faults in the region.