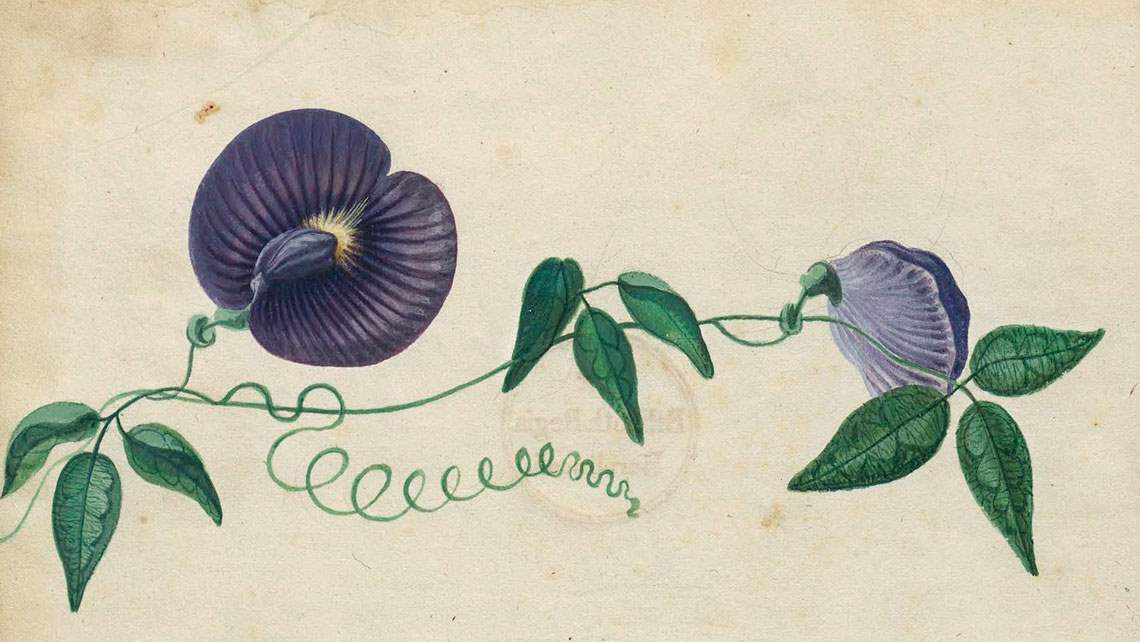 A nearly 400-year-old study of the flora from Northeast Brazil, observed and portrayed by Dutch artists and scholars, reveals practically unknown details about the introduction of exotic plant species into Brazil during the early seventeenth century. The set of illustrations is part of an iconographic collection titled Libri picturati in Latin (literally, books of images), organized between 1660 and 1664 by the German physician Christian Mentzel. Dedicated in part to Brazilian plants, the set features illustrations of 198 plant species, of which 163 are native to Brazil and 35 are exotic, according to an article published in October 2021 by three researchers from the University of Leiden, in the Netherlands, in the journal Scientific Reports.

Among the exotic plants, two drawings caught the eye of Spanish botanist Mireia Alcántara Rodríguez. The study’s lead author and a doctoral student in a research group led by Brazilian anthropologist Mariana Françozo, Rodríguez took notice of illustrations of a sunflower (Helianthus annuus) and a depiction of the branches and leaves of the West African pepper tree (Xylopia aethiopica), also called Ethiopian pepper. “The illustrations in Libri picturati are very likely the first record of these two species in Brazil,” observes Françozo. Along with her colleagues, Alcántara Rodríguez analyzed the botanical images produced in Brazil in the collection and determined the species and provenance of each plant illustration, in addition to checking its current conservation status in nature.

The history of the sunflower is one of the more interesting. Native to North America, it was originally cultivated by indigenous peoples for food over a thousand years ago. “Officially, the introduction of this plant in Brazil took place at the beginning of the twentieth century, after the great wave of European immigration. Its cultivation in Brazil was begun for oil production,” the anthropologist explains. “But the Dutch portrayed it as part of the flora of the Northeast three centuries before that.” According to one of the references found in the work, the Tupi indigenous groups in Brazil were aware of the sunflower as far back as the 1640s. In Libri picturati, the plant is called Camará-guaçu, most likely the name given it by the Tupi.

Because of its beauty, the sunflower was exported to Europe from Hispanic America by Spanish colonists in the sixteenth century, to be cultivated for ornamental purposes. It’s possible that the plant was brought to Brazil from the Old World earlier than supposed. The Leiden researchers outline some hypotheses to explain the plant’s arrival in the Northeast, probably in the seventeenth century or even earlier. Portuguese sailors, during their voyages across the Atlantic, may have acted as accidental agents introducing it into Brazil. Another possibility is that the sunflower was brought intentionally by merchants. Even the Dutch themselves may be responsible for introducing the plant from overseas. 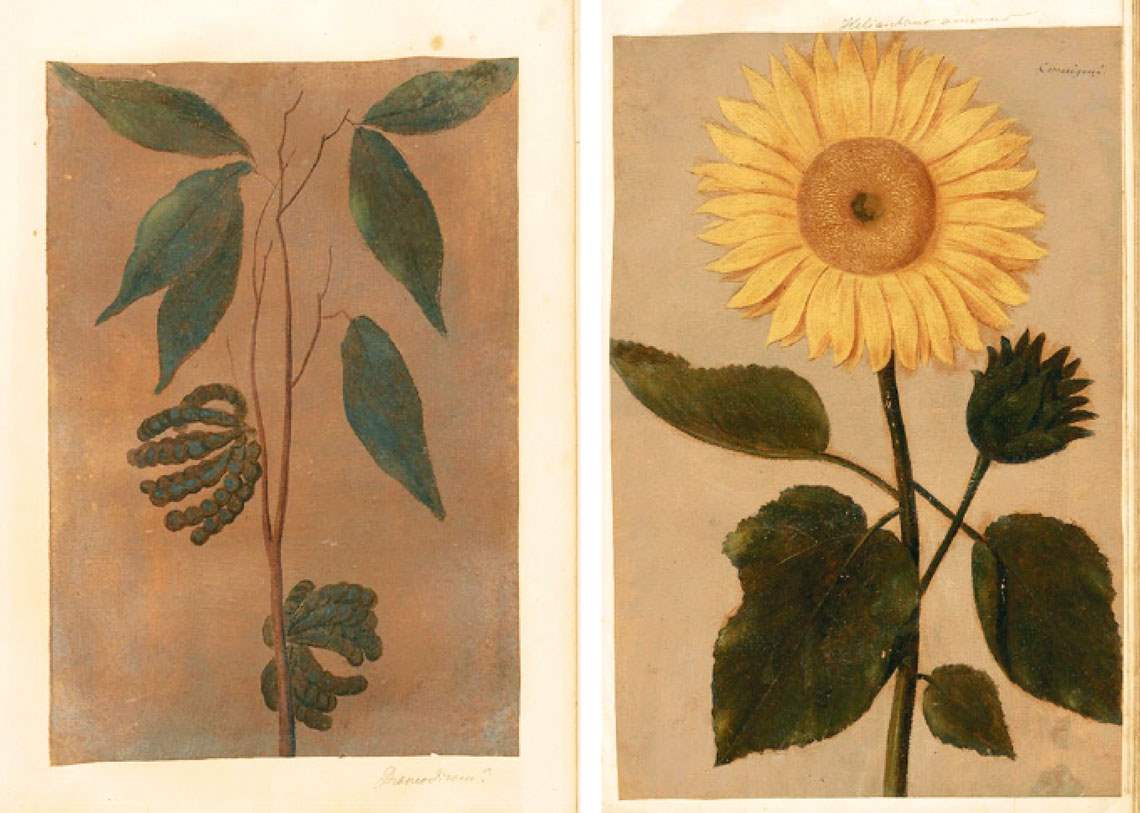 Although centuries old, the spread of the aromatic, medicinal African pepper, originally from the tropical forests of that continent, seems to have been less widely disseminated in Brazil. Outside Africa, this plant was widely used in Europe until being replaced in the sixteenth century by Asian herb varieties. In the colonial era, slaves on plantations in tropical America planted the pepper as part of their diet. In Brazil, there are records of its use in Candomblé rituals. But it ended up giving way to other peppers, native to the Cerrado (wooded savanna).

It is not known who created the nature illustrations made during the Dutch occupation of Pernambuco and parts of the Northeast from 1630 to 1654. Some researchers speculate that the drawings and paintings, made with different techniques, could be the work of the Dutch painters Frans Post and Albert Eckhout, who were in Brazil at the time, or they could be the work of the naturalist George Marcgraf. In addition to the flora, the drawings and paintings in the Libri picturati—produced during the government of Maurício de Nassau from 1636 to 1644—depict the fauna of the region.

“The illustrations in the Libri picturati have been studied very little over the years,” says Cláudia Philippi Scharf, who defended her doctorate in visual arts in 2019 at the Federal University of Bahia (UFBA), based on the fauna illustrations that appear in the collection. “They have been around for almost 400 years, but for long periods they were forgotten in libraries and were considered missing after the Second World War.” The collection was kept in a museum in Berlin, but, like many other books, it was removed from the German city during the war in the 1940s. For three decades, its whereabouts remained unknown. In 1977, the collection was uncovered in the Jagiellonian Library in Krakow, Poland, where it remains today.

The iconographic material in Libri picturati that was generated in Brazil consists of different collections of images, drawings, or paintings, never printed. The oil paintings, such as those of the sunflower and African pepper, appear in the album Theatrum rerum naturalium Brasiliae. The drawings and paintings in watercolor and gouache are in Libri principis. The images made in crayon or pencil were bound in an album titled Miscellanea cleyeri. All these titles—in addition to drawings made by artists and naturalists in other parts of the globe during the same era—were gathered in this collection that became known as Libri picturati.

“The Libri picturati collection presents very well-preserved material that acts as a type of photography of that time. Many of the plants, which caught the attention of those who made the records because they were very abundant, then had medicinal uses,” observes Françozo. “The set of documented species also makes it possible to make important environmental correlations with what’s occurring today.” Today, this 380-year-old collection of artistic scientific illustrations is fully digitized and may be the subject of other types of research.