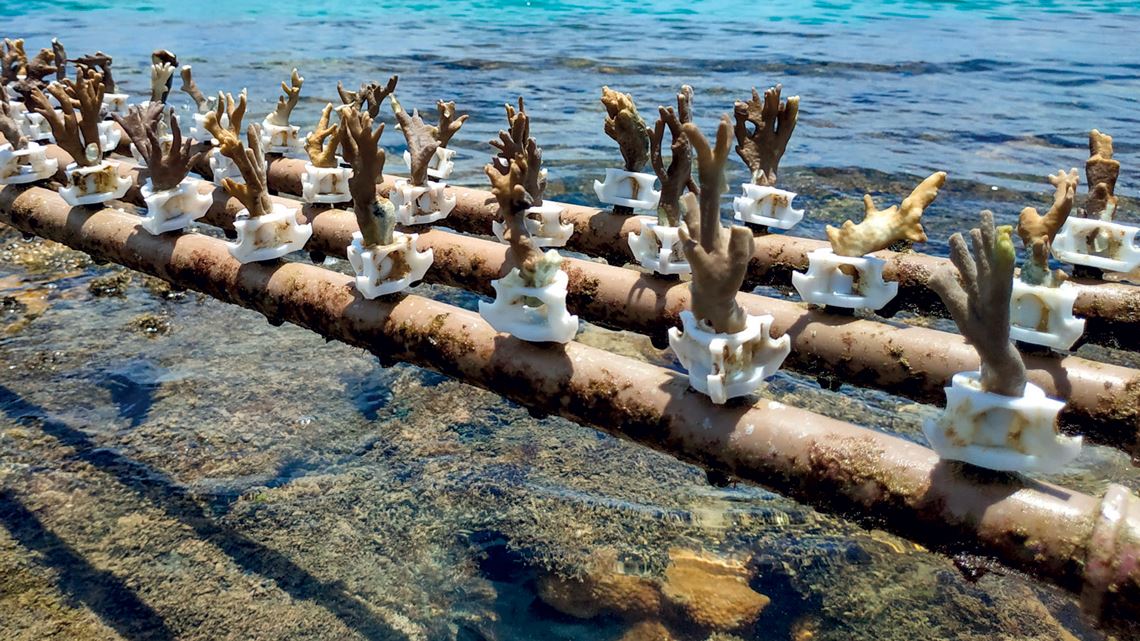 An innovative technique conceived at the Federal University of Pernambuco (UFPE) may help preserve coral reefs. Scientists from Biofábrica de Corais, a project linked to the Luiz Accioly Enzymology Laboratory (LABENZ) at UFPE’s Department of Biochemistry, have developed a kind of cradle to cultivate fragments of endangered coral species. Each piece of coral grows in a cradle for a few months until it is ready to be transferred permanently to places that have lost their original reef. A pilot project is being conducted in the natural pools of Porto de Galinhas beach, a popular tourist destination in Ipojuca, 50 kilometers from Recife, the state capital.

Corals are invertebrate animals formed of small soft-bodied polyps, connected to each other by a calcareous skeleton. The technique created at UFPE, capable of making the transplantation process simpler and more accessible, has the potential to mitigate reef degradation caused by ocean pollution and warming. When marine environments are affected by oil spills, for example, which can lead to sudden temperature increases, one of the consequences is coral bleaching, where the coral polyps expel zooxanthellae, a microalgae that lives inside their tissues and gives them their color. Bleaching can kill the polyps, leaving only the white calcareous skeleton.

Biofábrica’s work, which started six years ago, has already resulted in two patent applications for devices related to the cultivation of corals and sea sponges. “We want to promote a multidisciplinary approach to coral conservation and involve the local community, allowing them to see the process from the perspective of economic sustainability,” explains fishing engineer Rudã Fernandes, scientific coordinator for the project, which has 34 members, including biologists, engineers, designers, communications professionals, and sailors, of which 17 are permanent employees and the rest occasional collaborators.

The group cultivates two species in the nursery in Porto de Galinhas, also known as a coral farm: fire corals (Millepora alcicornis) and brain corals (Mussismilia harttii). The latter have been at risk of extinction since 2014 and are considered one of the most important reef building species thanks to their stony composition. Fire corals, whose branches offer shelter to various aquatic organisms, are endangered because they are more sensitive to sudden changes in water temperature, which can occur as a result of global warming, but also due to exposure to low tides or increased water temperatures in shallow natural pools.

So far, the coral cultivation results have been encouraging. Fire corals can grow by 40% in 90 days and brain corals triple in size in 120 days. Within three months, according to Fernandes, they are able to fully colonize the nursery and are completely recovered from the stress of the management process. “But we are still investigating the ideal amount of time for them to stay in the nursery before being transplanted into a marine environment,” says the researcher. 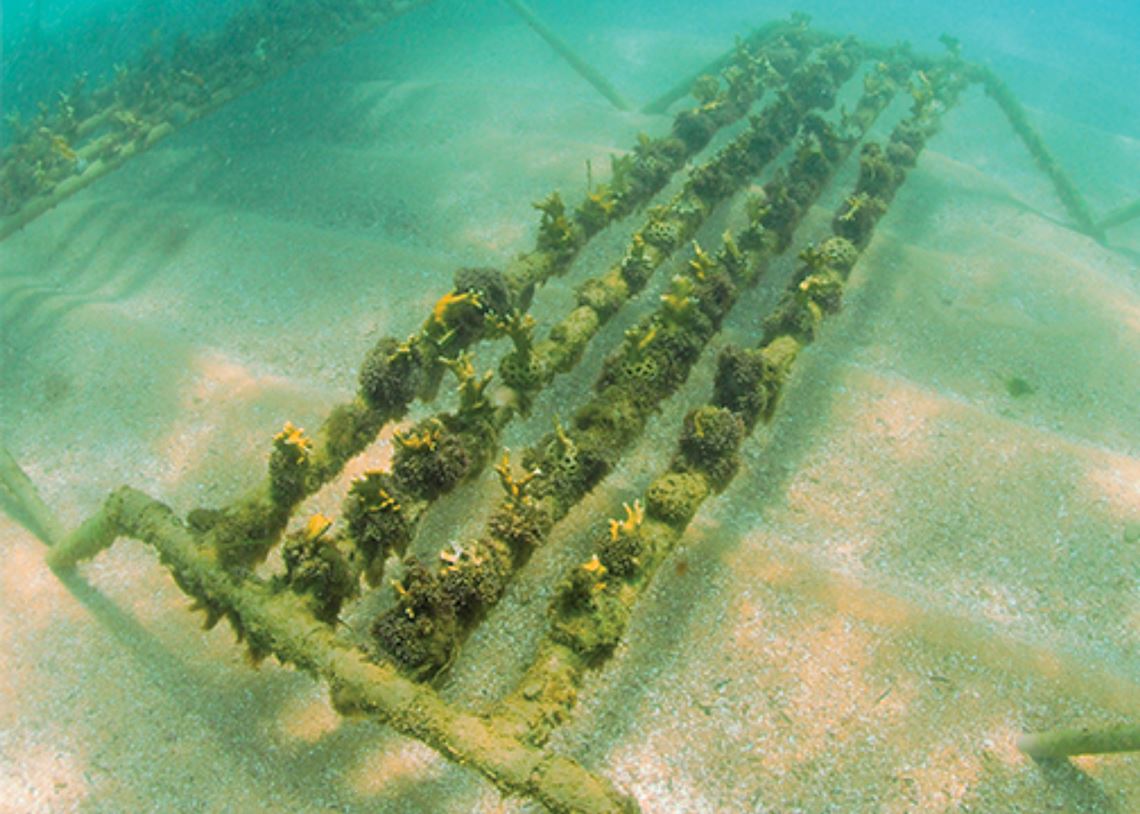 Global challenge
Coral reefs are found in less than 0.1% of the world’s oceans, but are home to 25% of marine biodiversity—hence the importance of preserving them. In addition to sustaining so much life, these colonies form an environment that offers coastal protection, abundant fishing grounds, a source of bioactive ingredients for the pharmaceutical and cosmetic industries, and a popular tourist attraction. They are, therefore, an important source of wealth to local communities.

According to the Coral reef restoration report published this year by the United Nations Environment Program (UNEP) and the International Coral Reef Initiative (ICRI), there are coral reefs in more than 100 countries worldwide, and at least 500 million people depend on them for subsistence. The document estimates that if Australia’s Great Barrier Reef had a market value, it would be worth US$56 billion, with related economic activities generating US$6.4 billion per year.

This abundance of resources, however, is under threat. Coral reefs are one of the ecosystems most vulnerable to climate change and human activities. It is estimated that half of the world’s reefs have been destroyed in the past 30 years, and an even larger portion may disappear in the coming decades if global warming is not stopped. “As an example of the scale of the threat faced by corals, a heat wave in 2020 caused the bleaching of about 80% of the fire corals in Porto de Galinhas,” warns Fernandes. “In this acute situation, we need to work fast. Otherwise, five years from now, we may have nothing left to save.” 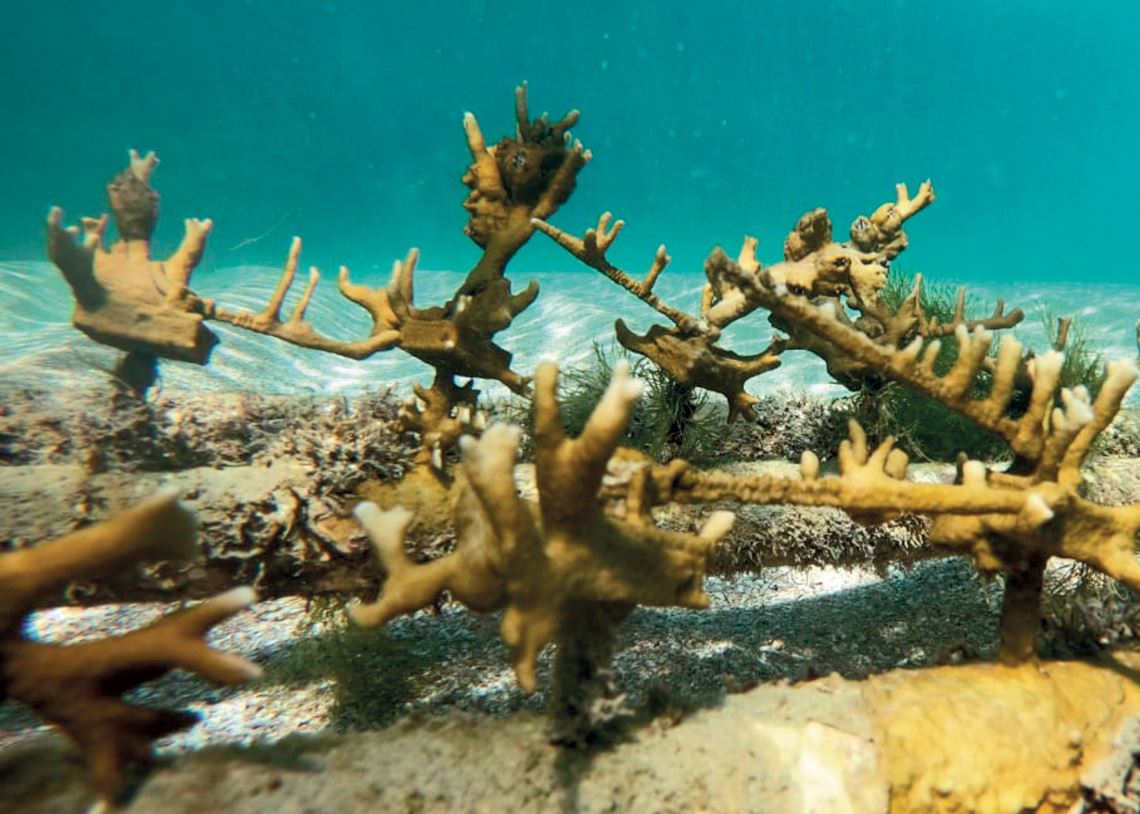 Carlos Dos Santos / EcojangadaBiodegradable cradles
A review led by biologist Lisa Boström-Einarsson of James Cook University in Queensland, Australia, analyzed more than 360 restoration projects in 56 countries and noted that 70% of the initiatives involve coral nurseries. In Brazil, the UFPE project is one of the pioneers. Other strategies used around the world to recover corals include onshore laboratories for accelerating coral growth, direct transplantation without the use of nurseries, and the removal of competing organisms.

“Coral cultivation and restoration is not a novelty in itself. This has been going on for a few decades now. In the long term, the approach has shown promise in the Caribbean, Thailand, and Florida, USA. In periods of 8 to 12 years, these regions saw greater coral coverage and greater structural complexity in locations that had undergone restoration than non-restored areas,” says biologist Alberto Lindner of the Federal University of Santa Catarina (UFSC). “It is important, however, to emphasize that transplantation should be seen as a last resort for conservation. Preventive measures, such as avoiding overfishing, controlling ocean pollution, and establishing conservation units can be cheaper and prevent damage to coral reefs.”

In Pernambuco, the innovation recently developed by the UFPE team is in the parts used as the cradles where the corals will be grown. They are made of the biodegradable polymer PLA (polylactic acid) using 3D printers. On land, this material degrades in about a year, but researchers still do not know how long it will take to decompose at the bottom of the sea. One of the novel aspects of the structure is that it is designed to adapt to the morphology of different species, which can accelerate their growth (see infographic below). “Sea sponges and corals are animals associated with the substrate, and they develop on a fixed surface. But in many nurseries, we saw them hanging from cords; and we wanted to do things differently. When we fixed the sponges onto a surface, the results were better, and then we tried the same approach with the corals,” says Fernandes.

The researcher points out that they perfected the design based on observations of the growth pattern of certain species. “The first version we made for fire corals was a square plate. After noticing that the animal tended to branch out and grow faster in the corners, we designed a sphere with 12 points sticking out. We increased the number of corners while decreasing the size of the structure. This resulted in productivity gains in the printing process,” explains Fernandes. “For brain corals and other flatter species, which spread outwards as they grow, we use flat surfaces with small variations to optimize their recovery.”

Another advantage of Biofábrica’s device is that it makes the nursery mobile, allowing it to be moved to avoid events that cause stress to the corals, such as pollution or rising temperatures. “We can transfer our farms to deeper locations in the sea with the help of sailors and divers. In these locations, the water temperature is lower and doesn’t threaten coral growth. If the structure was attached to a rock, for example, we could lose several years’ work in the event of a thermal anomaly or other issue,” points out Fernandes.

“In the near future, thanks to funding from the WWF [World Wildlife Fund], the cradles will be made by injecting plastic directly into a mold, increasing productivity. The development of plastic polymers for printing will likely be a future line of research,” he adds. The group also has plans to install bases on dry land, like greenhouses, with corals growing in the cradles inside large aquariums.

The impact of this technology is not limited to scientific and ecological results. As recommended by UNEP and ICRI, Biofábrica is striving to make native coral management a community activity that provides economic and social benefits to the places where it is introduced. “It is essential that the community plays an active role in coral preservation,” says biochemist Ranilson Bezerra, the project’s general coordinator. Researchers and residents unite through awareness activities and guidance on marine preservation, as well as the involvement of fisherpeople, divers, and tourism professionals in the identification and management of local species. 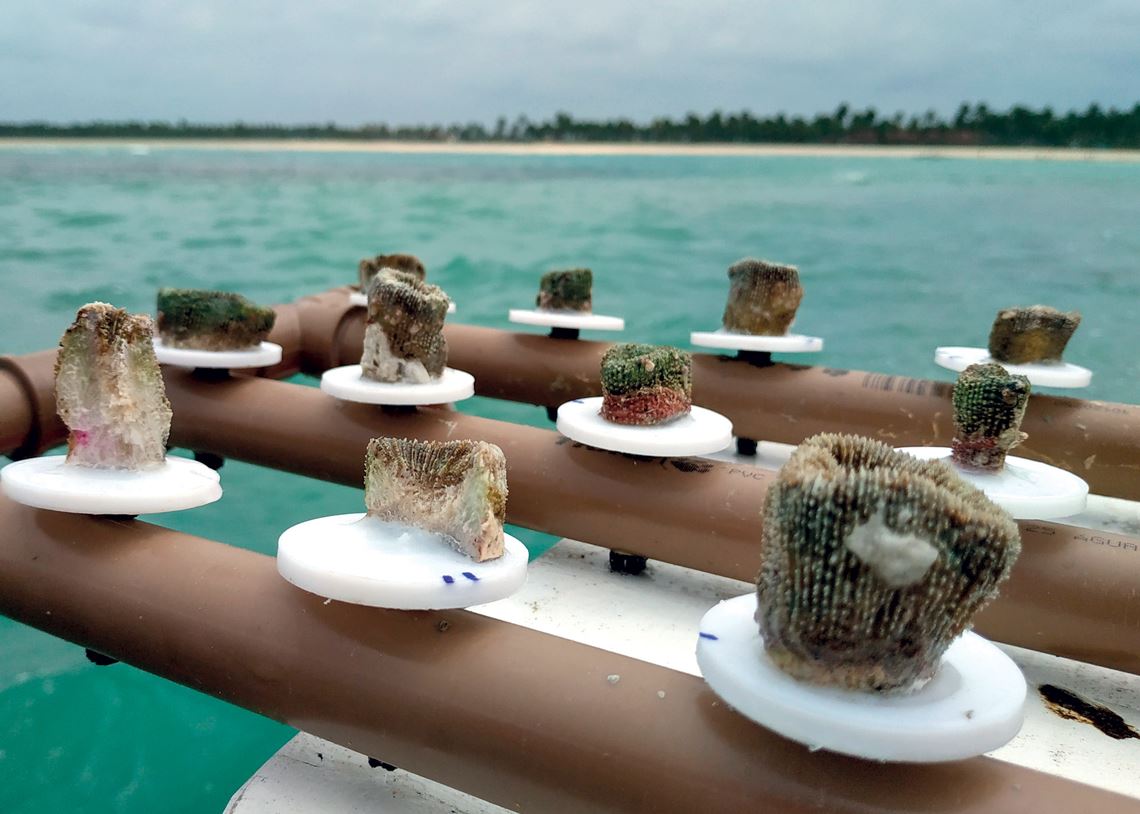 Vinícius Nora, a conservation analyst at WWF Brazil, explains that Biofábrica is funded as part of its Coralizar Project, run jointly with the Neoenergia Institute, in partnership with UFPE, the Federal Rural University of Pernambuco (UFRPE), and the Nautilus Institute. “We decided to fund the Pernambuco project because it understood its importance to the restoration of endangered corals. In recent years, coral bleaching and loss have reached dangerous levels. The development of new technologies, like those designed by Biofábrica, can help to mitigate and in some cases even reverse the degradation seen off the coast of Brazil and other countries.”

The initiative also received financial support from the Boticario Group Foundation for Nature Protection, ridesharing company Uber, and the Serrapilheira Institute. The funds have been used not only for coral management, but also to disseminate technology and promote exchanges between Biofábrica and parties interested in reef preservation in Brazil and abroad.

“In addition to combining conservation and innovation with interdisciplinarity and social impact, Biofábrica is offering a tool that can be studied, replicated, and scaled in other locations,” says biologist Janaína Bumbeer, an analyst from the Boticario Group Foundation for Nature Protection. “It is important to emphasize that this project is part of two UN programs that started this year: the Decade of Ocean Science, which aims to promote coastal health and resilience, and the Decade on Ecosystem Restoration,” she adds.

The Serrapilheira Institute recently selected Biofábrica for funding to make informative scientific podcasts. “In August 2021, we will launch our podcast Um mar de histórias [A sea of stories], featuring marine animals as characters. The protagonists will be two corals called Mussi and Mille, in reference to the species we have been managing,” says Thalia Santana, from the communications team at Biofábrica. “Our objective is to teach children aged 6 to 10 about the importance of marine life.”