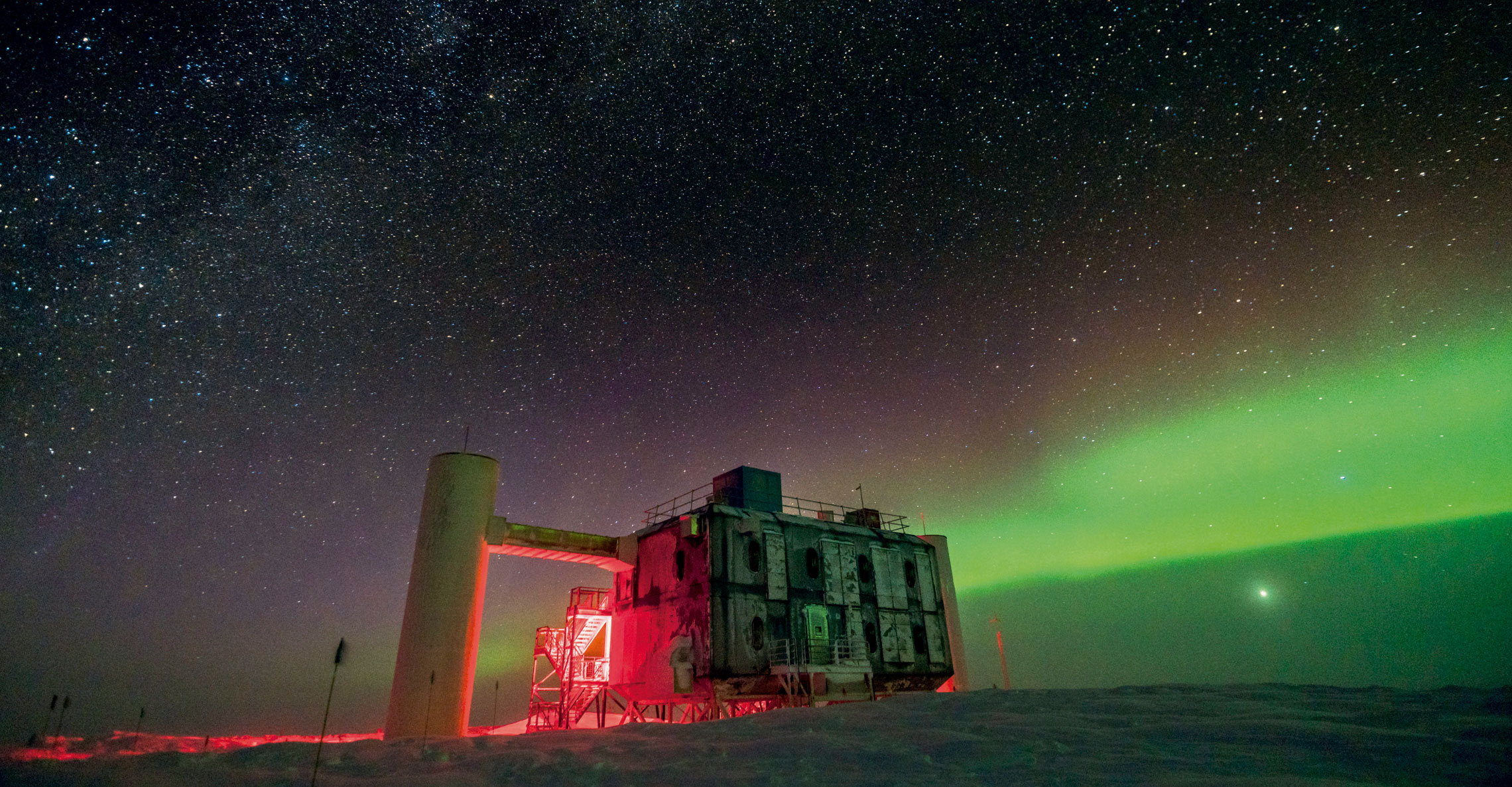 Two studies published in the scientific journal Science in July have provided solid evidence of the first documented source of high-energy neutrinos, which go hand in hand with high-energy cosmic rays, the most potent particles in the Universe: a giant elliptical galaxy outside the Milky Way, with an active black hole at its center. Known as blazar TXS 0506+056, the galaxy is located in the Orion constellation, about 4 billion light-years from Earth. The finding is the result of evidence accumulated by researchers from 17 international teams, who began collaborating shortly after the detection of a single high-energy particle, a neutrino, on September 22, 2017.

The original discovery that triggered the joint effort was made by the IceCube Neutrino Observatory, which has a network of 5,160 detectors buried under a billion tons of ice near the South Pole in Antarctica. High-energy neutrinos are considered indicators of the source of cosmic rays and are easier to detect. Scientists believe the same celestial objects that produce these neutrinos are responsible for emitting cosmic rays. Thus, the studies suggest that supermassive black holes at the center of galaxies billions of light-years from the Milky Way may be one of the sources of these high-energy particles.

Announced on July 12, the discovery of high-energy neutrinos was celebrated as yet another example of what is known as multi-messenger astronomy, where researchers combine the observation of various types of electromagnetic radiation with the detection of other particles and waves emitted by celestial bodies. During the press conference, one of the IceCube coordinators, physicist Olga Botner, from the University of Upsalla in Sweden, recalled that a combined observation of electromagnetic radiation and gravitational waves last year enabled scientists to identify the explosive collision of two neutron stars and to study in detail the consequences of such events, which produce heavy chemical elements, such as gold. “We have not yet detected neutrinos in connection with gravitational waves,” said Olga. “But we believe we will soon enough.”

High-energy neutrinos and cosmic rays are emitted by the same types of celestial objects, such as the blazar in the Orion constellation

The data obtained so far corroborates the hypothesis that black holes act as powerful accelerators for cosmic particles, which can reach energy levels millions or even billions times greater than those produced in the largest equipment ever built by scientists. Discovered in 1912 by Austrian physicist Victor Hess, cosmic rays are electrically charged particles that travel through space at close to the speed of light. They can be electrons (particles with a negative electric charge), protons (particles with a positive electric charge) or atomic nuclei (groups of protons and neutrons). Most low-energy cosmic rays are created and accelerated by stellar explosions in the Milky Way, while those with more energy consist of protons or atomic nuclei that originate from distant locations outside our galaxy. The main challenge in determining their origin is that because they are electrically charged particles, they do not travel in a straight line: their trajectory is altered when they cross magnetic fields inside and outside galaxies.

One way around this problem is to look for high-energy neutrinos, which is what the IceCube observatory has been doing since it began operating in Antarctica in 2003, funded by the National Science Foundation and other research funding institutions in the USA and 10 other countries. Neutrinos have a tiny mass and no electric charge, meaning they interact with almost no other matter. This enables them to travel through space in a straight line, passing through almost anything they encounter along the way without being disturbed, which is why they are commonly known as “ghost particles.” In 2013, a study by an international collaboration at the IceCube observatory concluded that some of the high-energy neutrinos detected on Earth came from outside the galaxy and were produced by the same phenomena that generate cosmic rays. Tracing the source of these extragalactic neutrinos would also lead to the origin of high-energy cosmic rays.

In September 2017, IceCube detected a single neutrino with an energy of 290 tera-volts (TeV), 40 times greater than the accelerated protons created in the Large Hadron Collider (LHC), the largest particle accelerator in the world, located on the Swiss border with France. By tracing the course of the neutrino through the IceCube detectors, researchers discovered that it came from somewhere in the Orion constellation.

The IceCube team immediately issued an alert asking the global astronomical community to direct their telescopes toward the region. Seconds before the IceCube alert, however, the group that coordinates the large area telescope (LAT) of the NASA Fermi satellite had also issued an announcement, stating that the brightness of a source of gamma rays—an extremely high-energy form of light (electromagnetic radiation)—in the same region of space had increased by nearly five times.

Illustration of a blazar, a supermassive black hole at the center of a distant galaxy that emits neutrinos and gamma rays directly at EarthIcecube /Nasa

“When IceCube issued its alert, the community of gamma-ray observatories was already ready,” says Ulisses Almeida, a researcher at the Brazilian Center for Physics Research (CBPF) in Rio de Janeiro. Almeida works with the team that operates the Magic telescope in the Canary Islands, a gamma-ray observatory that contributed to one of the studies published in Science. “This is a gamma-ray source whose brightness varies greatly, so the Fermi-LAT team has been monitoring it routinely for years.”

Following the IceCube and Fermi alerts, 17 observatories around the world began monitoring the varying brightness of the gamma-ray source known as TXS 0506+056. The observations confirmed that TXS 0506+056 emits radiation from all energy bands of the electromagnetic spectrum, from the lowest (radio waves) to the highest (X-rays and gamma rays). After combining the data from these observations, the astrophysicists concluded that the source of all the radiation was a jet in an active galactic nucleus 4 billion light-years from Earth.

Jets pointed at Earth
An active galaxy has a supermassive black hole (with a mass equivalent to billions of suns) at its center, which constantly consumes matter in the form of incandescent and electrically charged gas. This gas spins and accumulates in a disc around the black hole. “Two opposing jets, perpendicular to the disk, are created by magnetic fields that channel and accelerate some of the gas out of the galaxy,” explains Almeida. “These jets are even longer and brighter than the galaxy itself. And in the case of blazar TXS 0506+056, the jet is aimed directly at Earth.” Blazars are what astronomers call active galactic nuclei whose jets are pointed at our planet. Electromagnetic radiation and neutrinos are carried by the jet, arriving on Earth after traveling in a straight line for billions of years.

Researchers were able to identify the blazar as the source of the neutrino thanks to two coincidences: firstly, the particle was detected at the same time as the increased brightness of TXS 0506+056, and secondly, both the neutrino and the radiation came from the same area of space. According to Almeida, identifying the origin of high-energy neutrinos could change scientific understanding about the composition of blazar jets. “Because neutrinos can only be produced by protons and accelerated atomic nuclei moving at close to the speed of light, the jet must be composed not only of electrons, as most researchers previously believed, but also of these particles,” explains Almeida. “So the jet could be a cosmic-ray accelerator.”

When a neutrino interacts with Antarctic ice, secondary particles are produced that leave a trace of blue light as they travel through the IceCube detector, as shown in the illustration aboveNicolle R. Fuller/NSF/Icecube

Was this coincidence merely the result of chance? To make absolutely sure of their finding, the researchers analyzed over 10 years of data from the IceCube observatory in search of other high-energy neutrino detections from the same region of space. Between September 2014 and March 2015, the detectors hidden under the Antarctic ice recorded a dozen neutrinos that potentially came from blazar TXS 0506+056 but left a fainter trail.

At the same time, astrophysicist Bruno Arsioli, who specializes in identifying blazars based on data from the Fermi-LAT telescope and is currently doing postdoctoral research at the University of Campinas (UNICAMP), collaborated with a team from the Technical University of Munich to look for other blazars active in the same region at the same time. “We concluded that TXS 0506+056 was active and was the predominant energy source, producing the most extreme gamma rays observed by Fermi-LAT in that region of the sky between 2014 and 2015,” says Arsioli. “Previous studies have attempted to associate high-energy neutrinos with blazars, but only by analyzing a single event where detecting a neutrino has coincided with increased galactic brightness. This is the first time that two neutrino detections have been linked to the same blazar.”

Pierre Auger
Another international experiment, this time at the Pierre Auger Observatory, which was built in the province of Mendoza, western Argentina, in 2004, is studying the most energetic cosmic rays ever observed, which exceed millions of TeV. Due to their high energy levels, these cosmic rays would be less affected by the magnetic fields they encounter along their journey, and would therefore be capable of traveling in almost a straight line from their source to Earth. Researchers have noticed a relationship between the locations of active galactic nuclei and the direction of cosmic rays detected by the Pierre Auger Observatory until 2007. Data from subsequent observations, however, could not confirm the link. An analysis of all the data accumulated at the observatory until 2017 confirmed that the ultra-high-energy cosmic rays come from outside the Milky Way.

“Blazar TXS 0506+056 is within the field of vision of our observatory,” says physicist Carola Chinellato, from UNICAMP, leader of the Brazilian group that participates at Pierre Auger. She explains that as well as cosmic rays, Pierre Auger can detect neutrinos, but only those with energies higher than 100,000 TeV, which is higher than those recorded by the IceCube. “We have already studied this blazar as part of our ongoing point source analysis and we have not found any neutrinos coming from that direction,” says the physicist.