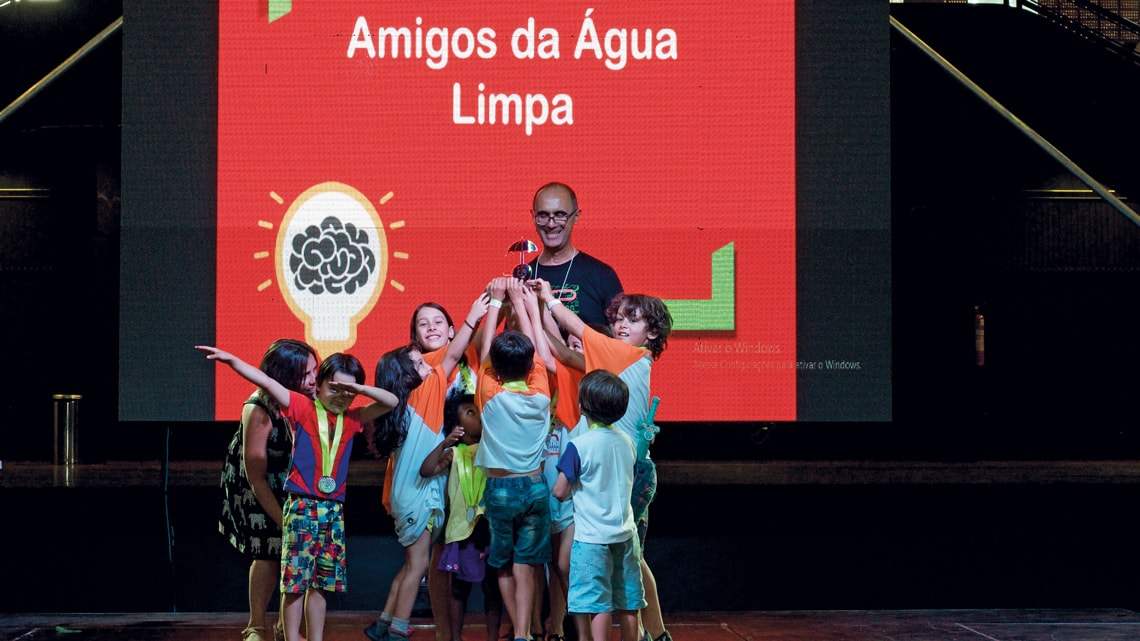 You could hear the shouts of a lively crowd even from outside the Multidisciplinary Gymnasium at the University of Campinas (UNICAMP). Contrary to what one would imagine, the competition wasn’t sports, but science. Inside, in various arenas, students were putting their prototypes to the final test while classmates cheered on the competing teams with drumming, dancing, and pompoms. The challenge: to filter 10 liters of water mixed with 100 grams of vegetable soil and 50 grams of sieved limestone. In 15 minutes.

“Our group has had a lot of ups and downs. We did tests and made a lot of mistakes, but in the end we were getting crystal clear water. In addition to scientific concepts, we learned how to deal with mistakes and work in teams,” says student Isadora Santos, 12, a member of the “Aquaporins” team, from the Crescer Educational Institute, in Campinas, São Paulo. Along with four other colleagues, she developed a prototype consisting of two complementary filters. The first, consisting of sieves and pantyhose, removes most of the soil. “Then it splits into four minifilters and each has the same amount of coal, rock, and calcium carbonate to change the pH, as well as pantyhose and paper to remove the residues,” she says. Isadora was one of 240 children and adolescents aged 6 to 18 who participated in the finals of the 10th UNICAMP Grand Challenge, held on Saturday, October 5. Organized by the university’s Exploratory Science Museum, the event was attended by 56 teams from nine cities in the state of São Paulo.

Each year, participants are required to focus on a different problem. In 2019, the central question was: “How can you guarantee clean water for your city?” The question was inspired by the sixth of the United Nations’ 17 Sustainable Development Goals: “Ensure the availability and sustainable management of water and sanitation for all.” Based on this theme, teams of up to six students were allowed to sign up in two Challenge Tracks: the Experimental Track, which involves creating a prototype, and the more flexible Exploratory Track, a new option this year.

The participants of both tracks were able to enroll in three categories: “Traquitaninhas” (little gizmos), elementary school students up to the 6th grade; “Traquitanas” (gizmos), students in 7th through 9th grades; and “Traquitanões” (big gizmos), high school students. All the steps necessary for participation were explained in the Grand Challenge Handbook. In all, there were 19 participating schools, with 21 teams receiving awards this year, in criteria such as originality, creativity, impact, development process, and presentation. The event was attended by 25 evaluators, including faculty, doctoral students, postdoctoral interns, and university researchers, all volunteers. In addition to trophies and medals, the teams received invitations to attend a workshop at the museum to build a turbidimeter, which measures water turbidity using the Arduino automation platform.

In the Experimental Track, students needed to solve a predefined problem based on a fictional story: a rural community temporarily needs to collect water from a local stream for its own consumption. How might this water be treated using available methods and materials? Each team had to develop filters capable of treating simulated stream water. Since May, students have been working on project development and holding meetings with museum staff, until they arrived at the Grand Challenge arena.

The experimental way
As in the scientific process, students were encouraged over the months of preparation to test the results of their projects in order to improve what wasn’t working, or create a new approach. In the Experimental Track, the team “ASU – Until We Are One,” from the Professor Antonio Dutra State School in Itatiba, São Paulo, invested in less conventional elements and was given the “Most Creative Solution—Traquitanões Group” award. “I learned that we can use more than just the chemical products we’ve seen in class,” says 16-year-old student Ingrid Pelarin. The experiment they developed also used two filters, one embedded in the other. “The first, in addition to gravel, and coarse and fine sand, also uses coriander and banana powder—which help get the heavy metals out of the water—as well as coffee filter paper and a sieve. The second filter contained banana peel powder, lemon balm, filter paper, and cloth,” she says.

Jessé Romero, 18, a student at Severino Moreira Barbosa State School in Cachoeira Paulista, São Paulo, also used natural products. A member of the “i9” team, which won for “Best Solution—Traquitanões Group,” Romero explains how the prototype was assembled: “We used the filter we learned about in the 6th grade and concepts that we saw in the classroom, but we exchanged the standard components for other, more ecological ones. Our solution featured banana fiber, which we used to trap heavy metals using an ionic bond, since the metals are positive and the banana fiber is negative. In addition, when we noted that the water was descending very slowly, we used a compressed air filtration system,” he concludes.

Event organizers collected samples that were analyzed in a lab set up in the gym. “This is the first time we’ve had quantitative analysis. In other years evaluators looked at the creative results. Now, in addition to looking at the whole process and the creativity, we’ve added scientific data on the characteristics of the water. Some teams have achieved very good water quality,” comments the physicist responsible for the museum’s experiments, Claudecir Ricardo Biazoli. In the samples, three factors were analyzed: turbidity, pH, and water color.

“Our goal is to give these children and young people the opportunity to experience how science, or the scientific method, can be used to solve problems relevant to society by using tools and thinking about how to make a plan, hypothesize, and validate results,” explains André Santanchè, director of the Exploratory Science Museum. The event is supported by the Office of the Dean of Extension and Culture. 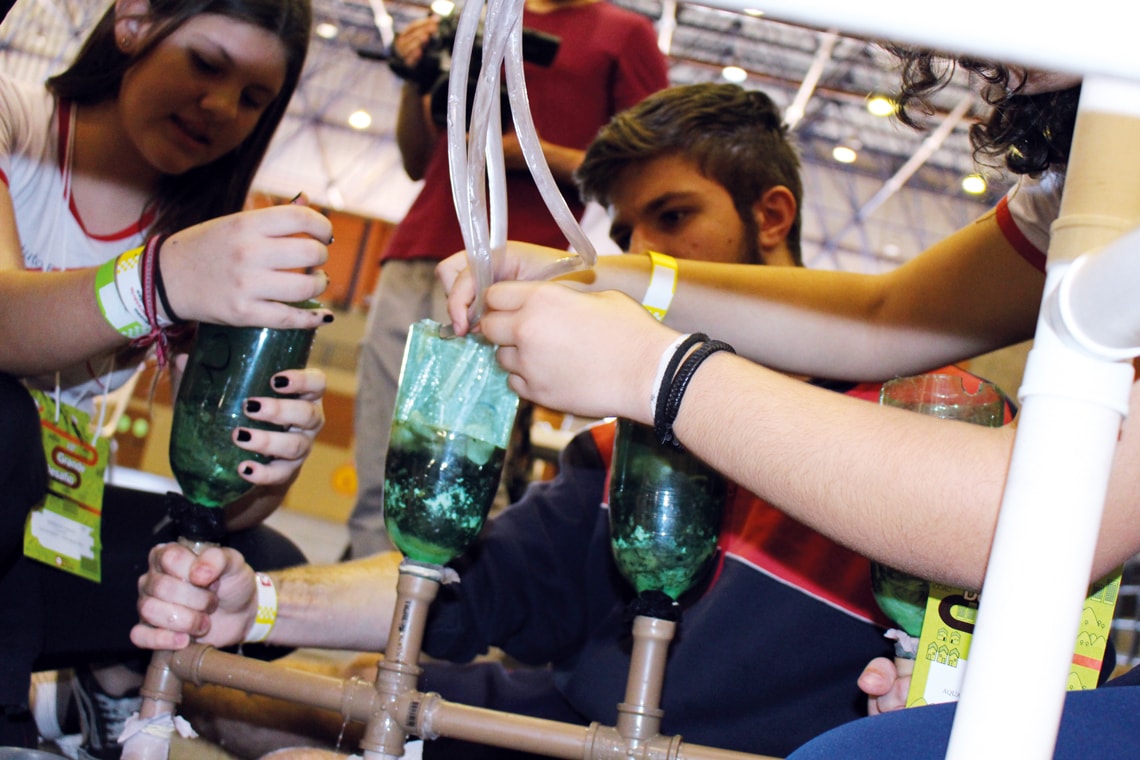 The exploratory path
On the new Exploratory Track, students were encouraged to look around at their communities, and then present posters with solutions related to water use. This track was chosen by the “Friends of Clean Water” team, formed by children between 6 and 8 years of age who live in the district of Barão Geraldo, in Campinas. The group analyzed the water of Ribeirão das Pedras, which flows through the area. “They went to the river, verified the dirty conditions, and saw a pipe pouring out sewage and foam. We also measured the pH of the water, researched scientific articles, and then the children began to think about ways to clean this water,” says chemical engineer Juliana Queiroz Albarelli, a researcher at UNICAMP’s School of Food Engineering. She is the team’s advisor and mother of 8-year-old Andres, who was responsible for bringing his friends into the Challenge.

In addition to the poster, they took water samples, and built a model with Lego pieces. “Our proposal is to make an eco-barrier and create two treatment stations,” explained Andres. The first of them, for removing sewage, would be made using a sieve and filters with stone, sand, and flour from cotton and moringa seeds, for flocculation (clumping) and settling of the silt, and to remove bacteria. The second station would use sunlight and dried, ground banana peel to remove pesticides and heavy metals. His teammate Clara Ribeiro, 6, also explained what she learned from the experience: “We saw different ways of cleaning the water and we also learned to work in groups. We are now bringing people together to build these two stations and the eco-barrier.” The team won in three “Traquitaninhas” categories: “Distinction in Project Preview,” “Distinction in Projected Results,” and the “Most Creative and Original Solution” award.

Three students from the São Paulo Federal Institute of Education, Science, and Technology (IFSP), Salto campus, decided to work with another type of water, grey water from washing machines. They formed the “MIF” team and started with the question: is it possible to water plants by reusing this water? Their main concern was with waste, since most often the water used in washing machines is discarded.

“The machine releases water in three cycles during washing. Water with soap, with softener, and plain rinse water. We did bibliographic and field research and showed that the soapy water can in fact impede plant growth. It depends, but it can even kill them,” explains student Igor Sena, 17. “However, with softener, and clean water, it doesn’t have a serious effect. To the contrary, on some plants, water with softener even helps to fertilize them,” he adds. The group won the “Best Teamwork” award in the Exploratory Track. “One thing that really helped our research was seeing the pH calculation done in class, because we needed to calculate the soil and water pH for each wash cycle,” says 17-year-old student Fabrício Vieira.

The Grand Challenge has already become a part of the yearly calendar for many schools participating in the competition. Such is the case of the Crescer Educational Institute, where the event has already become a kind of parallel course in the curriculum. “As soon as the registration opens, we start to prepare,” says science teacher Milena Bertoncelli, who was the Aquaporins team advisor. She also notices a change in attitude in the classroom. “With the hands-on work, they can see the concepts they learned earlier in action. And they say, ‘Wow, so that’s what changed the pH?’ I’ve also had an improvement in grades throughout the class. Before coming to the Challenge final, they present their experiment to the entire classroom. So everyone learns together,” she adds.

At the IFSP campus in Salto, the Exploratory and Experimental tracks have been integrated into the coursework of some disciplines. “Since the high school students are doing technical training, we created this integration. Some subjects give them the space to build their projects and work with concepts of physics, math, and automation,” says math teacher Anderson Afuso, who is participating in the Grand Challenge for the third time, and was already part of organizing the event when he was still a student at UNICAMP. This year he was one of the MIF team advisors.