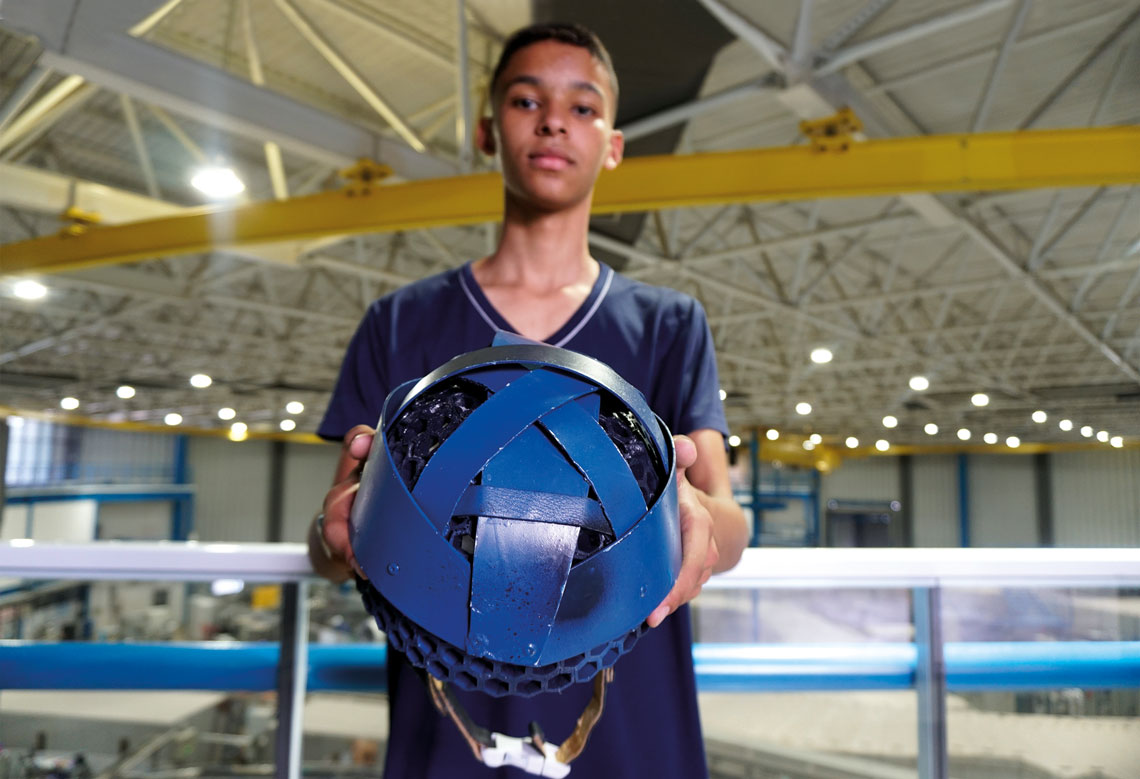 Guilherme Vieira, a student at Escola Ângelo Scarabucci, in the city of Franca, portrays a sustainable helmet made from footwear industry waste

During an afternoon in September 2019, residents of the Jardim Paulistano neighborhood in the city of Franca, São Paulo, stopped to watch a student fall off a bicycle and simulate an injury, while a group of classmates filmed the scene, supervised by a teacher. Just over a month later, the resulting video would win first place in the Ciência para Todos (Science for All) contest, organized by the Roberto Marinho Foundation/Canal Futura and FAPESP, with support from the São Paulo State Department of Education. For the video, titled “Proteção dos pés para a cabeça” [Foot protection for the head], high school students from Escola Estadual Ângelo Scarabucci selected one problem—the city cyclists’ habit of not wearing safety equipment—and proposed a solution: a prototype of a sustainable helmet, made of waste from the footwear industry, an area of economic activity that is traditional to the city.

Henrique Pereira, biology teacher and team advisor, explains that the script resulted from a scientific research paper proposed earlier that year. “The students were encouraged to come up with creative solutions to everyday problems. Among them was the lack of safety equipment for cyclists,” says Pereira. “To obtain concrete data, we conducted a survey with 150 employees at a shoe factory. It yielded that 20% of them ride bicycles as a means of transportation, and that none of them use any safety equipment. Almost half of these cyclists reported having already had to miss work due to some type of accident that occurred while riding their bicycle,” adds the teacher.

The next step was designing a sustainable helmet for cyclists. And why not make use of the materials discarded by the very factory whose employees were surveyed? “We had to do some research about how traditional helmets were made,” recalls Karoline Dias, 16, a second-year student at the school and a member of the winning team, along with four other students. “Then we looked in our city for materials we could use to build a helmet,” she shares.

The prototype was made with several types of waste: polypropylene buckets, used for grease and paint in the factory; plastisol, used to make shoe soles; powder resulting from the leather skiving process; and scraps of ox and sheep leather and shoe lining. The team was awarded with tablets and given the opportunity to choose a research center to visit, recommended by FAPESP. In addition to the winning video, the Escola Ângelo Scarabucci had four other videos competing in Science for All. The goal of the initiative was to encourage public high school students from the state of São Paulo to reflect on and research a local problem, within the area of “Nature and Society,” then formulate hypotheses and present solutions. The scientific method used should then be documented in videos of up to 7 minutes in length.

According to Pereira, two factors contributed to the Franca school having several projects competing in the contest: a full-time schooling program and communicating within the school about the experiments of other students at the last Brazilian Science and Engineering Fair (FEBRACE), which takes place in São Paulo and brings together projects by students from public and private elementary, secondary, and technical schools from all over Brazil. “A full-time program makes a difference because we have more time to work with the students and develop concepts.”

In total, Science for All received 106 video entries. From those, 47 met all the requirements and were evaluated by a panel that included representatives from the institutions that created the initiative. Five productions from different schools—four of them having full-time programs—won awards. In addition to the winning team, four teams of up to five students and one teacher were chosen as finalists. For the contest, the priority was not esthetics, but scientific research and the project created to solve the problem selected by the students. The five videos started airing on Canal Futura in December 2019 and will be available at futuraplay.org.br.

According to Mônica Pinto, institutional development manager at the Roberto Marinho Foundation, the experiments presented by the students surprised the organizers. “The quality of the projects is very high,” she asserts. Haroldo Corrêa da Rocha, executive secretary at the State Education Secretariat, points out that the video format was chosen in order to arouse the interest of the students. “We need to start stimulating young people in basic education in order to have more scientists in the country. With the videos, we are using a medium with which young people are connected.” 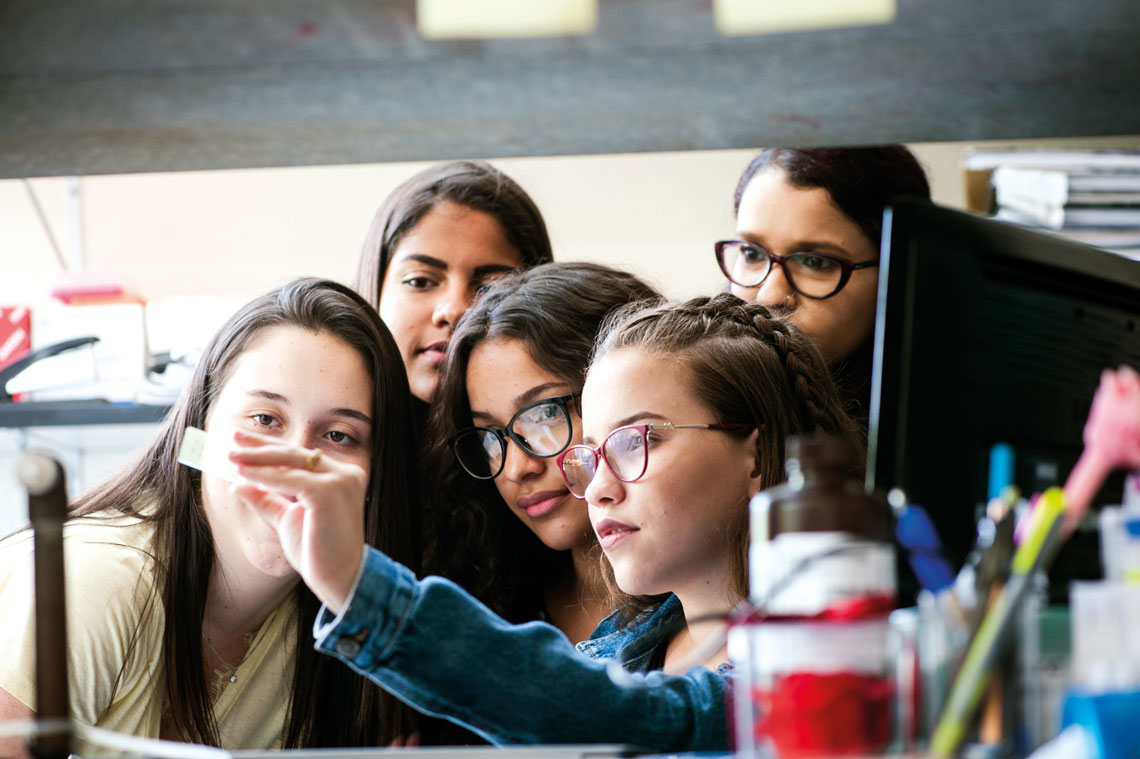 The winning students got to visit the Human Genome and Stem Cell Research Center, at USPLéo Ramos Chaves

Aquaponics and a suspended garden
The Escola Estadual Coronel Francisco Schmidt, in the city of Pereira Barreto, São Paulo, was one of the winners, with the video “Biotecnologia em aquaponia em uma escola de ensino integral paulista” [Biotechnology in aquaponics in a São Paulo full-time school]. Aquaponics is a closed system that combines fish farming with the growing of food, such as vegetables. In order to create the system, the team received donations of fish, pipes, boxes, and lettuce seedlings. In this system, the vegetables absorb nutrients dissolved in water through tilapia feces, and the cycle yields clean water.

“We studied, read articles, practiced, built this whole system, and realized that it would have amounted to nothing if we hadn’t persevered. It didn’t work at first. The fish died, but we did not give up,” says student Luana Assumpção Santos, 17, a Grade 12 student. Their first attempt failed due to errors in temperature. “Tilapia cannot survive below 12 degrees Celsius. The weather is generally warm here, but it was very cold in July, and temperature was down to 7 degrees in the early hours,” explains biology professor Elda de Aguiar Gama, the team’s advisor. The problem was corrected by protecting the system from the cold. The project resulted in pesticide-free plants to be consumed at the school lunch.

At the full-time high school Dr. Coriolano Burgos, from Amparo, São Paulo, students also developed a way to grow pesticide-free vegetables. Using about 70 PET bottles, they created a suspended garden. The school was built on land donated over 80 years ago, which used to be a cemetery. “We did not think it appropriate to use the land for cultivation, due to the risk of contamination by decomposition. So, we decided to go for the suspended gardens,” explains Giovanna dos Santos Ferreira, 16, a Grade 11 student and a member of the finalist team, selected for their video “Ciência Integração-Cemitério” (Integration-Cemetery Science). Other students volunteered to help set up and care for the garden. “Although the group had five students, the whole school got involved,” shares biology teacher Tamires Bianchi Darioli, who supervised the project.

Stills from the winning video “Foot protection for the head,” produced by public school students from FrancaReproductions

Scientific concepts and violence
Two other winning videos dealt with topics involving relevant debates. A group of four female students from the Zilda Prado Paulovich state school, from Nova Independência, São Paulo, decided to assess their classmates’ knowledge of scientific concepts and narrated the experience in their video “A concepção dos adolescentes sobre ciência: conhecimento científico ou senso comum?” (How teenagers think about science: scientific knowledge or common sense?). “Some topics backed by science and that had been discussed in class were being questioned by some of the students, using arguments based on common sense,” claims biology teacher Jumma Miranda Araújo Chagas, team advisor. This is where the idea for the project was born.

The group prepared a survey and collected responses from 106 students from all three high school grades. Then, there was a debate about the topics in question: scientific method, the origin of life, evolution, global warming, and vaccines. Subsequently, the survey was repeated. The group assessed everything from knowledge about the topics to the habit of checking sources before sharing information. “We decided to show students the difference between common sense and scientific knowledge,” says Rafaela Rodrigues Carmona, 16, a Grade 11 student. During the first phase of the survey, only 30% of students said they always checked sources of information in the news and other contexts. After the debate, that number rose to 70%.

At the Benedita Pinto Ferreira state school, in Caraguatatuba, São Paulo, the winning group raised the topic of domestic violence and produced a fictional video based on real events. “We live in a poor area, where there are victims of domestic violence,” explains art teacher José Iraedson de Oliveira, the team’s advisor. “We decided to help raise awareness of women,” says Ester Amaral, 17, a Grade 10 student.

As part of the award, the five teams were given the opportunity to visit laboratories and research centers. The Brazilian Center for Research in Energy and Materials (CNPEM), in Campinas, São Paulo, was chosen by the students from Franca and Caraguatatuba. There, they were able to see the Sirius project, where one of the largest synchrotron light sources on the planet is being built (see report on page 56). “We went to see the particle accelerator. I want to be an engineer and work with robotics, and after the visit, I decided I want to do an internship at Sirius. I love math,” adds Ester Amaral. As a teacher, Oliveira considers the visit to be fundamental for the students’ development. “These visits give meaning to their life plans.” The Amparo team chose to visit the Institute of Biomedical Sciences at the University of São Paulo (ICB-USP). The students from Pereira Barreto and Nova Independência opted for the Human Genome and Stem Cell Research Center, at USP. “I want to be a biologist and all the researchers there were also biologists, which is very inspiring,” reports student Luana Assumpção Santos.