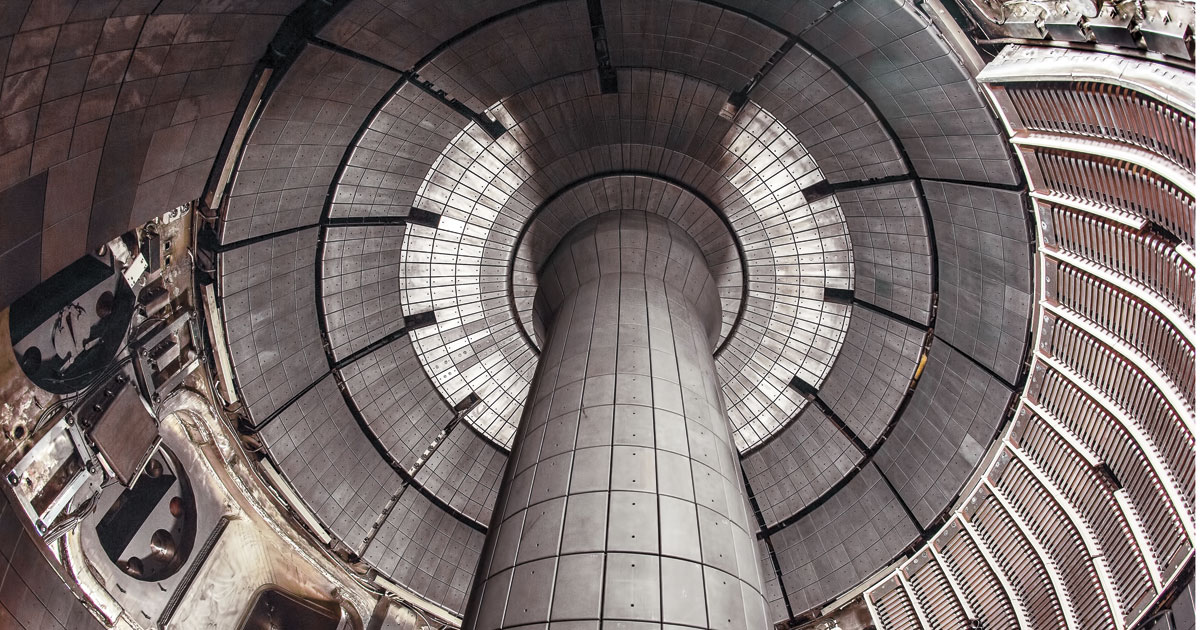 The NSTX, at Princeton University, was one of the tokamaks used to test the energy-loss reduction method

Turbulent systems with random fluctuations can be unpredictable, making it difficult to formulate models that explain natural phenomena. But stimulating a certain level of turbulence could actually be positive in tokamaks, the experimental nuclear fusion reactors where the nuclei of two different hydrogen isotopes join to form the nucleus of a helium atom, at the same time producing energy. This seemingly paradoxical idea was proposed by Brazilian physicist Vinícius Njaim Duarte, a postdoctoral fellow at Princeton University, USA, as a way of reducing the amount of energy that these superheated plasma reactors lose via a phenomenon known as chirping. What started as a theoretical proposal was then simulated by computers and later successfully tested in three tokamaks. “The greater the turbulence, the lower the chance that chirping will occur,” explains Duarte, who published the results of the experiments in the American Institute of Physics journal Physics of Plasma last December.

Inaudible to human ears, chirping in this context refers to a high-pitched trill emitted by frequency waves that propagate through the plasma in fusion reactors, so called because of the technical similarities it shares with bird song. It is caused by interactions between plasma oscillations and highly energetic particles. The phenomenon expels particles from the reactor, cooling the environment and compromising the continuity of nuclear fusion reactions. Every tokamak produces a particular amount of chirping, creating its own identity: some chirp a lot, others not so much. The effect also commonly occurs in astronomical objects, such as in the plasma of the Sun’s magnetosphere—the outer area of the star’s atmosphere that is filled with electrically charged particles. Turbulence is actually an inherent characteristic of fluids. In general, it does not need to be induced and occurs naturally due to the movement of the plasma particles. “Turbulence is usually undesirable in any system, but in tokamaks, it can potentially help to increase energy production in the plasma,” explains physicist Ricardo Galvão, director of the Brazilian National Institute for Space Research (INPE) and supervisor of Duarte’s doctoral thesis on the subject, which he defended last year at the University of São Paulo Institute of Physics (IF-USP).

Galvão accepted him as a student at the request of Italian physicist Roberto Antonio Clemente, from the Gleb Wataghin Institute of Physics at the University of Campinas (IFGW-UNICAMP). Clemente had fallen ill while supervising Duarte on his master’s degree, and before he died in 2011, he asked Galvão to supervise the student during his PhD. The USP physicist saw Duarte’s research potential and sent him to Princeton to work with one of his colleagues, Russian physicist Nikolai Gorelenkov. The original theme of his doctoral research was related to the physics of plasma, but not the issue of chirping specifically. “While working on his original topic, Duarte attended seminars and realized that chirping had never been explained,” says Galvão. “He decided to investigate the matter on his own and his results were excellent: his fellowship was extended for another year, funded by Princeton, so that he could study chirping.” It was during this period that he had the idea of ​​controlling chirping in reactors by stimulating turbulence in the plasma.

To test Duarte’s proposed model, specific experiments were carried out on the DIII-D tokamak, operated by the United States Department of Energy in the General Atomics laboratories in San Diego, California, by imposing a particular geometry that is known to mitigate turbulence. Chirping is usually a rare occurrence in the DIII-D, but during the tests the amount increased. In tokamaks where there is normally a lot of chirping, such as Princeton’s NSTX, Duarte and his colleagues at Princeton adopted a geometry that favors turbulence and successfully reduced the problem. Before confirming the key role played by turbulence, the researchers tested other hypotheses, such as collisions between particles and their resonance velocities, but no other factor seemed to control the chirping. “What we have learned about plasma in a laboratory setting could also be useful in explaining and controlling chirping in nature,” comments Gorelenkov, coauthor of the paper.

Photo taken in March 2018 shows construction of the ITER in southern France, which will be the world’s largest nuclear fusion reactorIter Organization / EJF Riche

The results were so encouraging that Duarte’s method is to be used in other tokamaks, such as the ITER, which is under construction in southern France and when completed will be the world’s largest fusion reactor. Its objective is to demonstrate the economic and scientific viability of energy produced by nuclear fusion. Scheduled to begin operations in 2025, the megaproject involves 35 countries and an investment of €20 billion. It is hoped that the ITER will be able to generate 10 times more energy than it spends, producing 500 megawatts (MW) for every 50 MW of input power. Those behind the project say that because it is so large, the reactor will produce energy more efficiently than its smaller counterparts. Nuclear fusion is safer and generates less radioactive waste than nuclear fission, which involves splitting the nuclei of atoms and is currently used to produce energy in atomic power plants. The problem is that current tokamaks, unlike nuclear power plants, consume more energy than they produce. The world’s largest nuclear fusion experiment, JET, located in Culham, England, has achieved a maximum efficiency of 67%: generating 16 MW for every 24 MW it invests.

Energy of the stars
In laboratories, the physics of plasma tries to imitate nature. The nuclear fusion process created in tokamaks produces energy in the same way as the stars. The immense gravitational attraction in these celestial objects pulls hydrogen atoms toward each other so strongly that fusion is inevitable. In theory, coupling two hydrogen isotopes to form a helium nucleus is relatively simple, but in practice, the task is not so trivial. To simulate the conditions of the stars in a tokamak, physicists have to make the atoms move a lot. The minimum temperature for triggering fusion in a tokamak is about 150 million degrees Celsius, 10 times hotter than the center of the Sun.

No current nuclear fusion reactors are capable of producing more energy than they consume, a problem still to be overcome

The tokamak is toroidal in shape, like a donut. Inside, strong magnetic fields confine a mixture of hydrogen plasma—a state of matter in which gases are heated until the electrons escape from the atoms—and fast particles, also known as alpha particles, including the nuclei of helium atoms. “To make fusion an efficient and self-sustaining process, we have to stop the fast particles escaping from the reactor so that they can transfer their energy to the rest of the plasma,” explains Duarte.

Scientific article
DUARTE, V. et.al. Theory and observation of the onset of nonlinear structures due to eigenmode destabilization by fast ions in tokamaks. Physics of Plasmas. Vol. 24, no. 12. Dec. 2017.