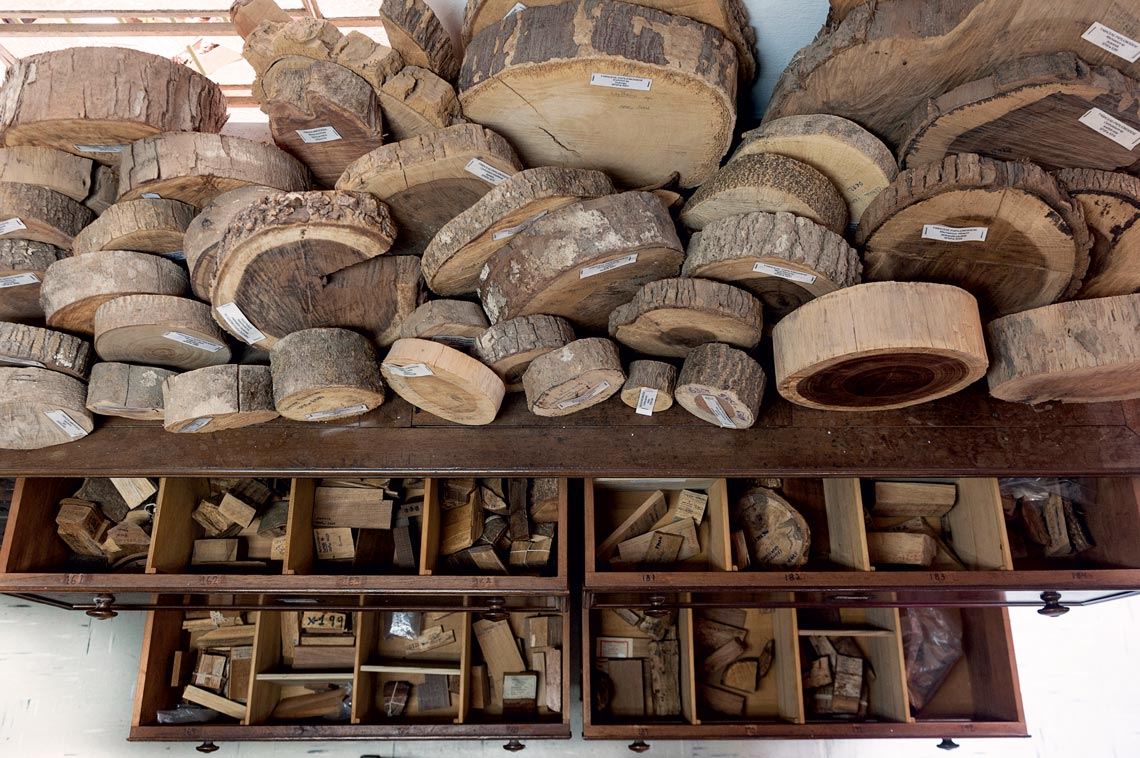 The institute’s xylotheque, with samples of woods used for identifying species and analyzing their physical properties

Architect and stringed instrument bow maker Daniel Lombardi spent one week in September smoothing wood from a species of tree he had never worked with previously, the louro-chumbo (Licaria crassifolia). He was making a 72-centimeter-long cello bow, which would subsequently be placed in the hands of musicians for evaluation. In his São Paulo studio he produces cello, violin, viola, and double bass bows with yellow ipe (Handroanthus sp.), pau-santo (Kielmeyera coriacea) and itaúba (Mezilaurus itauba), which sell for R$3,000 to R$9,000 each.

His goal is to offer legal alternatives to brazilwood (Paubrasilia echinata), whose commercial use is prohibited because the species is at risk of extinction. “Ipe is excellent for making bows,” Lombardi says. One of his collaborators in testing the properties of native wood species is biologist Eduardo Longui, from the São Paulo Forest Institute (known as IF), who recently watched the creation of a clarinet from another Brazilian wood, the aroeira (Myracrodruon urundeuva), being made by forestry engineer Lívia Barros.

The construction of musical instruments is but one little-known facet of an unobtrusive, yet centuries-old institute. Its history began with the Cantareira Botanical Garden, created in 1896, which was initially directed by Swedish botanist Alberto Loefgren (1854–1918), one of the pioneers of conservationism in Brazil. By 1911, the Botanical Garden had grown, and became the Forest Service, which was turned into an institute in 1970, with the goal of managing forest conservation, research, and production throughout the state. Headquartered in Alberto Loefgren State Park—better known as the Forest Gardens—in the city of São Paulo, the Forest Institute manages 47 green spaces with 52,000 hectares (1 hectare equals 10,000 square meters). These areas include 14 state forests in the Atlantic Rainforest and Cerrado (wooded savanna), and 10 ecological stations, dedicated to environmental conservation and research on the selection and genetic improvement of native species.

Baitello in the herbarium with a stereoscopic loupe, used to identify dried plants from the collection, called exsiccatae...
Léo Ramos Chaves

Through its management plans, which establish methods for the preservation and use of protected areas, “the Institute was a pioneer in using technology for planning conservation units,” says botanist João Batista Baitello, coordinator of the institute’s herbarium, which holds around 55,000 plant samples from around the state. Baitello is a specialist in trees in the Lauraceae family (Laurels), and has even identified ten new species. He edited the book O passado magnífico da ilustração e da pesquisa científica no Serviço Florestal do Estado de São Paulo – 1942 a 1960 [The magnificent past; illustration and scientific research in the São Paulo State Forest Service, 1942–1960]. The book launched this year, and features the work of illustrators Betty Hettfleisch (1927–?) and Maria Elizabeth Veiss (1917–1996), and a botanist monk, Bento José Pickel (1890–1963).

Fully protected conservation units are home to 48% of the 8,521 species of seed plants identified in the state, of which 111 are endemic and 176 are threatened with extinction, according to a November 2019 study in the journal Rodriguésia. “The next step will be to produce an online catalog of the flora in the conservation units, which will be adapted to each user’s profile and have environmental monitoring indicators for biodiversity management and conservation,” says IF agronomist Natália Ivanauskas, one of the study’s authors.

From 2007 to 2014, the seizure of illegally harvested wood in São Paulo increased by 630%, as a result of a method developed at the Forest Institute

Distinct audiences
The Forest Institute researchers interact with various sectors of the public. Through courses and visits to conservation units, they present savanna grass fields and scrubland fields to teams from compliance agencies, demonstrating two types of Cerrado biomes that can be confused with pastures, even though the vegetation is quite different when examined closely. “Together with the Botanical Institute, the IF provides the foundation for the big environmental conservation policies in the state of São Paulo,” explains Ivanauskas. Works such as the Forest Inventory are used by managers of municipal, state, and federal government agencies to create conservation areas and establish action plans for protecting endangered species, and for implementing strategies for conserving or restoring native vegetation, for example, by creating ecological corridors connecting fragmented forests between conservation units.

One example of applied research is found in the indications of success of forest restoration areas, presented in an article published in Restoration Ecology in May 2015 by biologist Marcio Suganuma, of Northern Paraná State University, and forest engineer Giselda Durigan, from the IF. “The techniques that are adopted don’t really matter, as long as they work,” says Durigan. In 2016, indicators for biodiversity and species density in recovery under planted trees—which are an indicator of forest growth—provided support for a resolution by the Department of the Environment to assess the state’s native vegetation restoration areas. The institute solves urgent problems for government agencies, such as in 2018, when researchers were able to help the São Paulo Institute of Criminology by identifying wood species using only the sawdust left in chainsaws.

With colleagues from universities and other research centers, IF teams identify biologically under-studied areas deserving of more attention, such as the state’s highland savannahs. 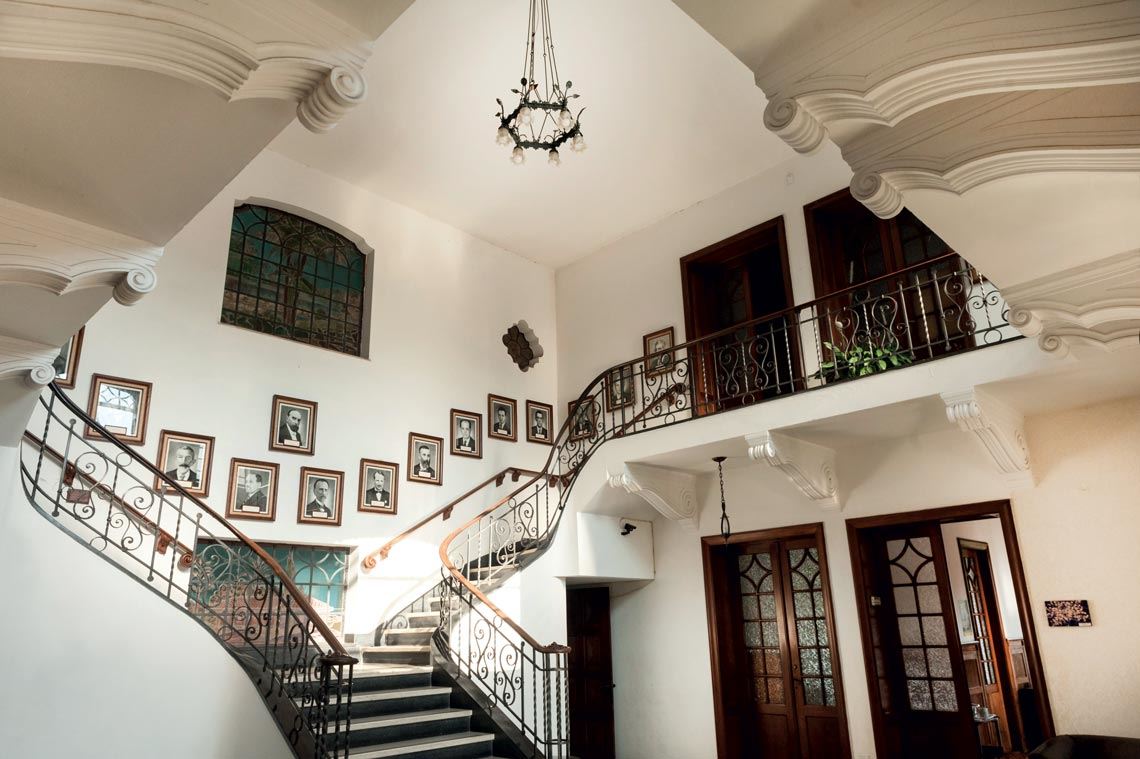 The lobby at the Institute’s headquarters, built in the 1940sLéo Ramos Chaves

For the business sector, they develop projects for genetically improving trees and propose new crops or uses for woods. The IF has 18 experimental stations with plantations of exotic species, mainly pine (Pinus spp.), for the production of wood or resin. “The Institute consolidated pine cultivation in Brazil, making São Paulo one of the largest national producers of improved wood and resin, and promoted the use of small-diameter timber used in housing construction,” recalls Baitello. The institute also promoted the use of the rubber tree (Hevea brasiliensis). In 2021, agronomist Francisco Kronka intends to launch a book proposing its use in furniture manufacture.

The general public, in turn, accesses the institute’s findings through its open presentations and in publications such as the book Plantas pequenas do Cerrado: Biodiversidade negligenciada (Small plants of the Cerrado: Neglected biodiversity), 2018. In July, SPIF agronomist Miguel Freitas participated in an online presentation about the physical properties—such as density and strength—and the potential for commercial cultivation of wood from Brazil’s native trees. These included the jequitibá-rosa (Cariniana legalis) and louro-pardo (Cordia trichotoma), on the basis of experiments carried out in two IF protected areas in the municipalities of Luiz Antônio and Pederneiras. “The foundation of the research was our germplasm bank, which has trees cultivated since the 1960s,” he points out. 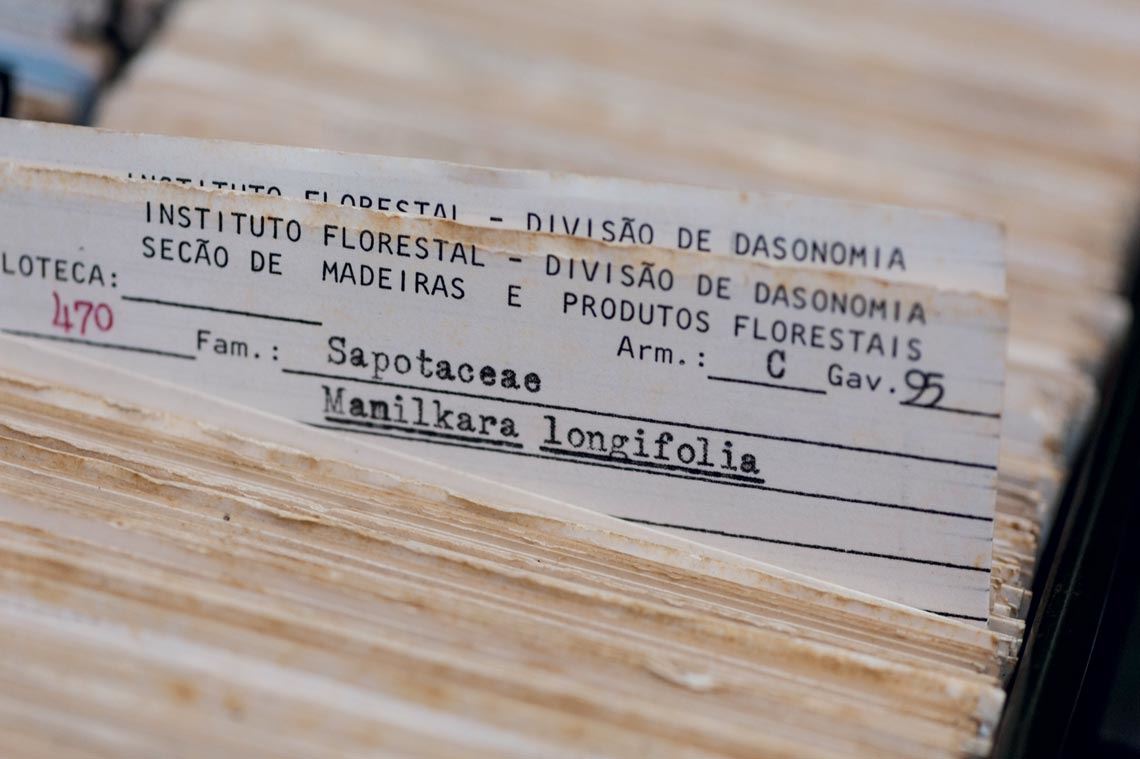 The xylotheque collection, still in file cabinets. The herbarium is digitized and onlineLéo Ramos Chaves

A study coordinated by the Brazilian branch of the World Resources Institute (WRI), released in October 2019, indicated 15 species of trees from the Amazon and 15 from the Atlantic Rainforest that have potential for cultivation and commercial use. “The IF already cultivates ten native species, some in conjunction with universities and other research centers,” says Freitas, one of the study’s authors. The study estimated a return of US$2.40 for every $1 invested in research in this area.

Identifying woods
The planting of native species, as it progresses, could slow down the illegal sale of wood, a problem that IF teams are helping to solve. From 2007 to 2014, seizures by environmental police and highway police patrol units of illegally obtained wood in the state of São Paulo increased by 630%, as a result of an identification method developed by IF biologist Sandra Florsheim. On the highways, to verify whether the transported wood is really what’s described in the documentation, the police examine wood samples with a portable microscope connected to a notebook computer. The images are sent via internet and examined by a team at the institute, based on their xylotheque—a collection with about 6,500 specimens (samples) of wood from across Brazil. 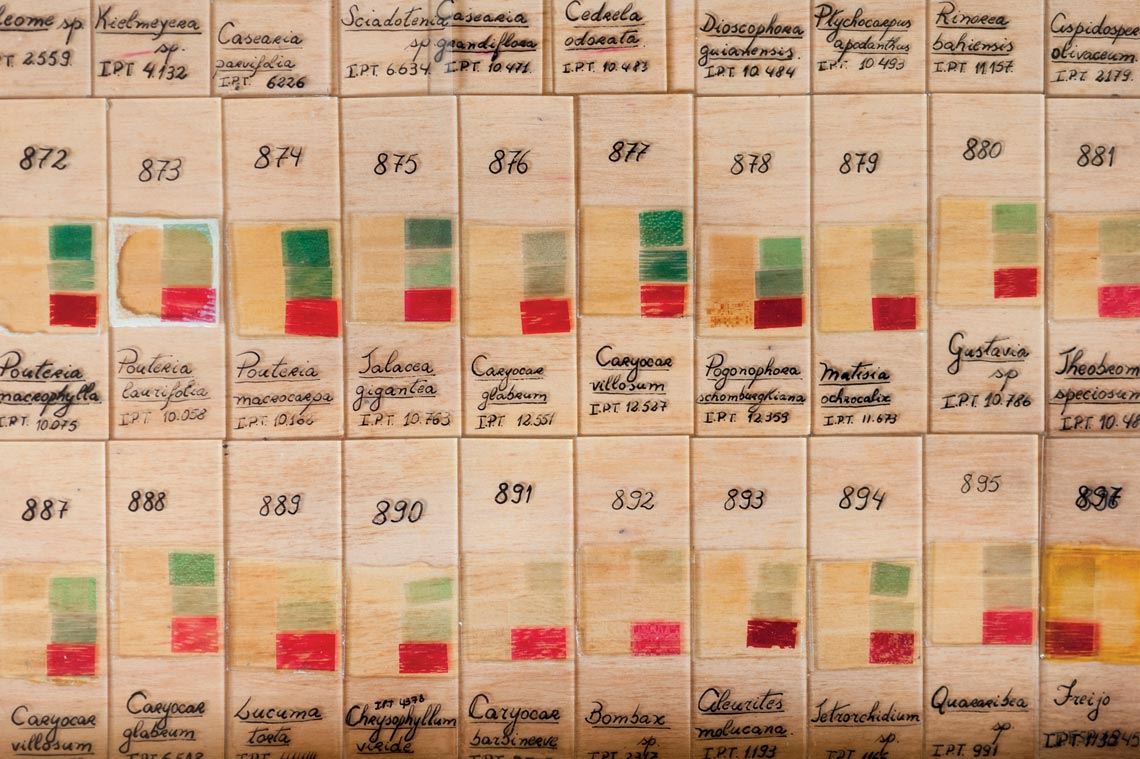 Florsheim explains that the police in the field receive the correct identification within a maximum of half an hour and, based on the report, either release or seize the cargo. “The illegality isn’t just in the transport and sale of wood species that, by law, can’t be cut. It’s also in the documentation, by declaring less-valuable species that pass as more valuable woods with the same appearance, which would be taxed at a higher rate,” she says. Florsheim has also authored and edited the book Identificação macroscópica de madeiras comerciais do estado de São Paulo [Macroscopic identification of commercial woods in the state of São Paulo]. Launched in September, the book includes an identification key with descriptions for the principal woods sold in Brazil.

Forestry engineer Alexandre Sebbenn has subsequently developed an even more refined method of wood identification, at the molecular level. Using markers of slight differences in DNA, he is able to identify the original locations of tree species whose wood is being illegally harvested in the Amazon, such as jatoba (Hymenaea spp.) and mahogany (Swietenia macrophylla). He believes that after six years of testing, and collecting about 5,600 samples from seven species for the database, the method is ready for use. Test results are available within two days, and can even indicate the origins of woods used in furniture and musical instruments.