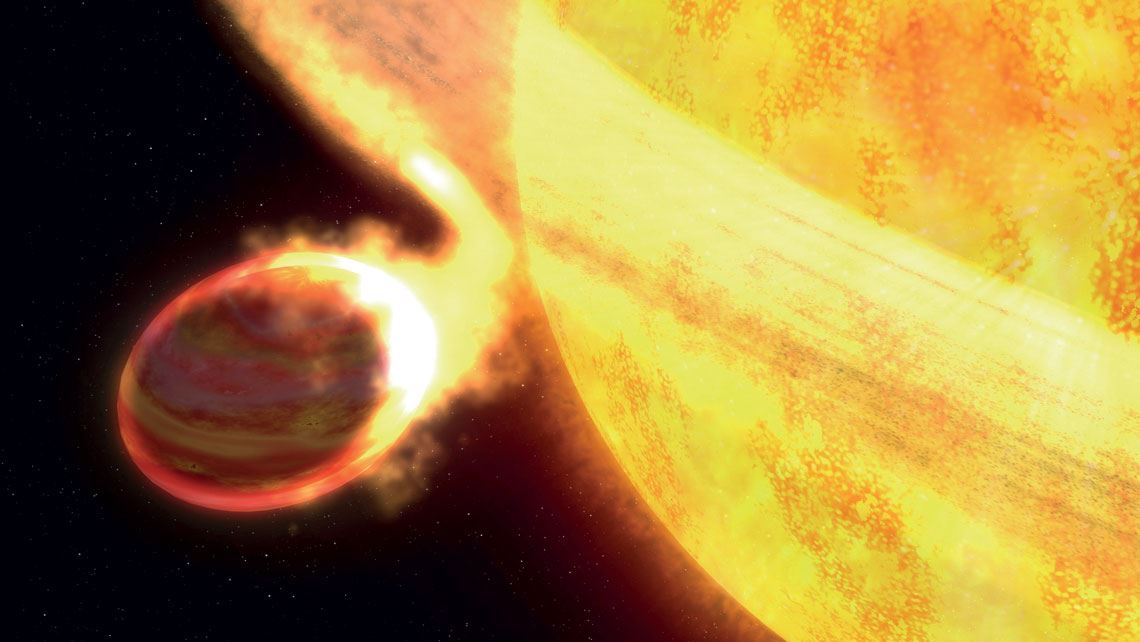 Illustration of a planet about to be engulfed by a star

An international group of astrophysicists, including Jorge Meléndez of the Institute of Astronomy, Geophysics, and Atmospheric Sciences (IAG) at the University of São Paulo (USP), found evidence that at least a quarter of Sun-like stars evolved in chaotic environments where gravitational instability led them to “swallow” planets. If correct, the hypothesis could help scientists understand why it is so difficult to find worlds like Earth and sets of planets similar to our Solar System. The group analyzed the chemical composition of more than 100 binary star systems formed by two almost identical stars of the same type as the Sun and found chemical signatures that suggest some of them had ingested planets.

The two stars in these systems orbit around a shared center of gravity and are almost always made up of the same chemical elements in the same proportions because they originated from the same cloud of space dust and gas. But in more than a quarter of the binary systems analyzed by the researchers, one of the stars had a different composition to its partner. “They contain more lithium and iron than their companion stars,” says Meléndez, coauthor of a study on the topic published in the scientific journal Nature Astronomy at the end of August, whose research on binary stars is funded by FAPESP.

There is no way this abundance of iron and particularly lithium could have come from the clouds from which the stars originally formed. Lithium is found in very low levels in Sun-like stars. But rocky planets like Earth, or even the cores of gas giant planets like Jupiter, are rich in the element. According to astrophysicists, the best explanation for such high levels of lithium in the stars is that they have consumed one or more of the planets that once orbited around them. “Even when a planet is destroyed the lithium is preserved, and it must have been absorbed by one of the stars in these binary systems,” comments Meléndez. Lithium and iron from the planets are dissolved in the outermost layer of the stars, known as the convective zone. In Sun-like stars, this layer represents 2% of their total mass.

This is not the first time this discrepancy in the chemical composition of two companion stars has been detected. The USP astrophysicist and his colleagues had already observed the anomaly, as had other research groups. The difference is that in this study, the set of stars under investigation is the largest in which the phenomenon has been seen. The authors looked at 31 binary systems (62 stars) using the HARPS spectrograph, an instrument at the La Silla Observatory in Chile, which is managed by the European Southern Observatory (ESO), used to search for exoplanets. They also gathered information about other systems from the scientific literature.

Lorenzo Spina, an Italian astrophysicist currently on a postdoctoral fellowship at the Astronomical Observatory of Padua in Italy and lead author of the article, believes the study paves the way for the use of chemical analysis to identify stars that are the most likely. to host groups of planets similar to our Solar System. “There are millions of relatively nearby stars similar to the Sun, but without a method to identify the most promising targets, the search for Earth 2.0 will be like looking for a needle in a haystack,” said Spina, who conducted postdoctoral research at USP with Meléndez with a grant from FAPESP between 2015 and 2017, in an interview with Pesquisa FAPESP.

Over the past 25 years, nearly 3,500 planetary systems and nearly 5,000 exoplanets have been discovered. Also known as extrasolar planets, exoplanets are worlds that revolve around any star other than the Sun. The problem is that the architecture of other planetary systems observed to date is very different to ours. “It is likely that in more dynamic systems, some of the planetary material may have fallen into the host star. However, how common these chaotic systems are in relation to more stable environments similar to our Solar System, whose orderly architecture favored the flourishing of life on Earth, is still unknown,” comments Spina. “Our research addresses this issue and indicates that at least a quarter of planetary systems orbiting stars similar to the Sun have had a very chaotic and dynamic past.”

According to José Dias do Nascimento Júnior, an astrophysicist from the Federal University of Rio Grande do Norte (UFRN), the theory that stars can ingest planets from their system was first proposed in the late 1960s, long before the first exoplanet was officially discovered in 1995. Since then, the idea has been refined from a theoretical perspective and supported by new observational data. “This article by Spina and Meléndez gives us the first estimate of how likely this type of event is to occur,” says Nascimento Júnior, who also studies binary stars, but did not participate in the study. “If the result is proven and confirmed by other studies, it will indicate that stable and Earth-like worlds are even rarer than previously thought and that finding them will be even more difficult.”