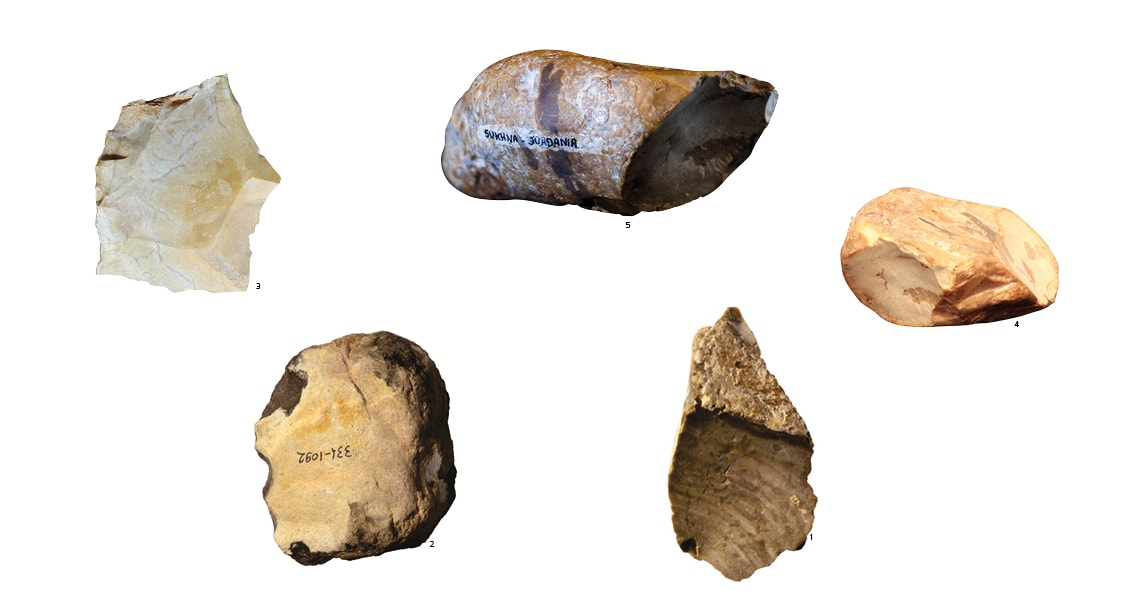 Specimens of chipped stone excavated in the Zarqa River valley

A group of archaeologists and geologists from Brazilian universities claim to have discovered the earliest evidence of hominins leaving Africa, considered the cradle of humanity. The geological layers in which the chipped stones and flakes were found, during excavations made from 2013 to 2016 in Jordan’s Zarqa River valley, were dated by three distinct methods, and showed a maximum age of approximately 2.5 million years. If the data are correct, the lithic artifacts were produced by the hands of archaic humans belonging to populations of Homo habilis, the first known species of the genus Homo, 400,000 years earlier than the oldest previously known record of hominins living outside the African continent. “Our study changes the history of mankind by almost half a million years,” says bioarchaeologist Walter Neves of the Institute of Advanced Studies at the University of São Paulo (IEA-USP), coordinator of the research team that conducted the study in Jordan and wrote the scientific article about its findings. The Zarqa River valley region where the chipped stones were found is about 40 kilometers from Amman, the Jordanian capital, and today is surrounded by agricultural lands and cities.

The dating and descriptions of the Jordanian lithic pieces, as controversial as most discoveries involving mankind’s earliest beginnings, were published online on July 9, in the journal Quaternary Science Reviews. In addition to possibly turning back the departure date of archaic humans from Africa, the chipped stone relics may also indicate that the first hominin species to leave the mother continent may not have been Homo erectus, which is currently the most widely accepted hypothesis. At the time of the Zarqa sites, 2.5 million years ago, there was only one species of hominin who worked with chipped stone, Homo habilis. Their name derives precisely from this ability, having been the first archaic humans to carve pieces of rock. Therefore, Neves and his colleagues deduce that this species must have created the Zarqa artifacts. The presence of water in the region would have attracted life, and was identified through geological evidence that dates back at least to the period in which the stones were worked.

The oldest known species of the genus Homo, H. habilis attained a maximum height of 1.4 meters, and its brain volume was about 650 cubic centimeters (cm3), while that of a chimpanzee ranges between 300 and 500 cm3. More highly developed, and probably emerging around 1.8 million years ago in Africa, H. erectus could measure between 1.60 and 1.80 meters in height and had a brain of at least 850 cm3, a volume close to that of modern man, H. sapiens (at least 1100 cm3).

Hominin bone fossils were not found at the excavations in Jordan, a limitation that makes it difficult to confirm the presence of populations of H. habilis in the area during remote prehistory. The researchers found only fossils from a few animals that had lived in the Zarqa region during different periods of prehistory, such as a mammoth, an aurochs, and horse remains. “It is very rare to find human skeletons at paleolithic sites,” says Italian archaeologist Fabio Parenti of the Federal University of Paraná (UFPR), another team member and coauthor of the work. “When we don’t find bones, we talk about the stones [chipped by humans].” According to the researchers, the nearly 2,000 lithic artifacts obtained in Zarqa have unmistakable features that were made by human hands and not by nature, a debate that always arises when new archaeological evidence is found that has the potential to “rewrite” prehistory. “We were very conservative in selecting the pieces for this study,” observes Parenti.

The chipped stones and flakes obtained at Zarqa would be characteristic of what is called the Oldowan lithic industry—very primitive and associated with H. habilis—documented in Africa at least 2.4 million years ago. They are basically stones from which flakes are produced. What sets the Oldowan industry pieces apart is their more angular shape (the region’s natural stones are more rounded), with corners chipped to angles less than 80 degrees. “In a 120-meter ravine we excavated and found an abnormal concentration of stone artifacts,” says archaeologist Astolfo Araújo of the Museum of Archaeology and Ethnology (MAE-USP), another team member. “Hominins didn’t hunt during that era. These flakes would have been used to peel meat from carrion,” explains Neves. The researchers explored the outcrops that appeared on the terraced walls, digging into the vertical cuts that have been opened in the region’s arid, compacted soil by agricultural projects. “The ground is so hard that we even use a jackhammer at the excavations,” says Araújo. Thus they had access to the content deposited on the overlapping layers of river sediments.

Finds from China and Georgia
The results from the Jordanian excavations, where the possible chipped stone artifacts were found—without the fossils of their creators—are reminiscent of other recent discoveries in paleoanthropology, a specialty that unites knowledge of anthropology, archaeology, and ethnology to study the origins and development of the first humans. Last year, similar news came from the Far East. Chinese researchers published an article in July 2018 in the journal Nature in which they reported the discovery of pieces from lithic industry (as archaeologists call stone artifacts crafted by human hands) at the Shangchen site in southeastern China, dated at 2.1 million years old. Prior to the chipped stones at Zarqa, these pieces from China were considered to be the earliest evidence of hominins outside of Africa. As in Jordan, the Shangchen excavations did not uncover any fossilized human bones. 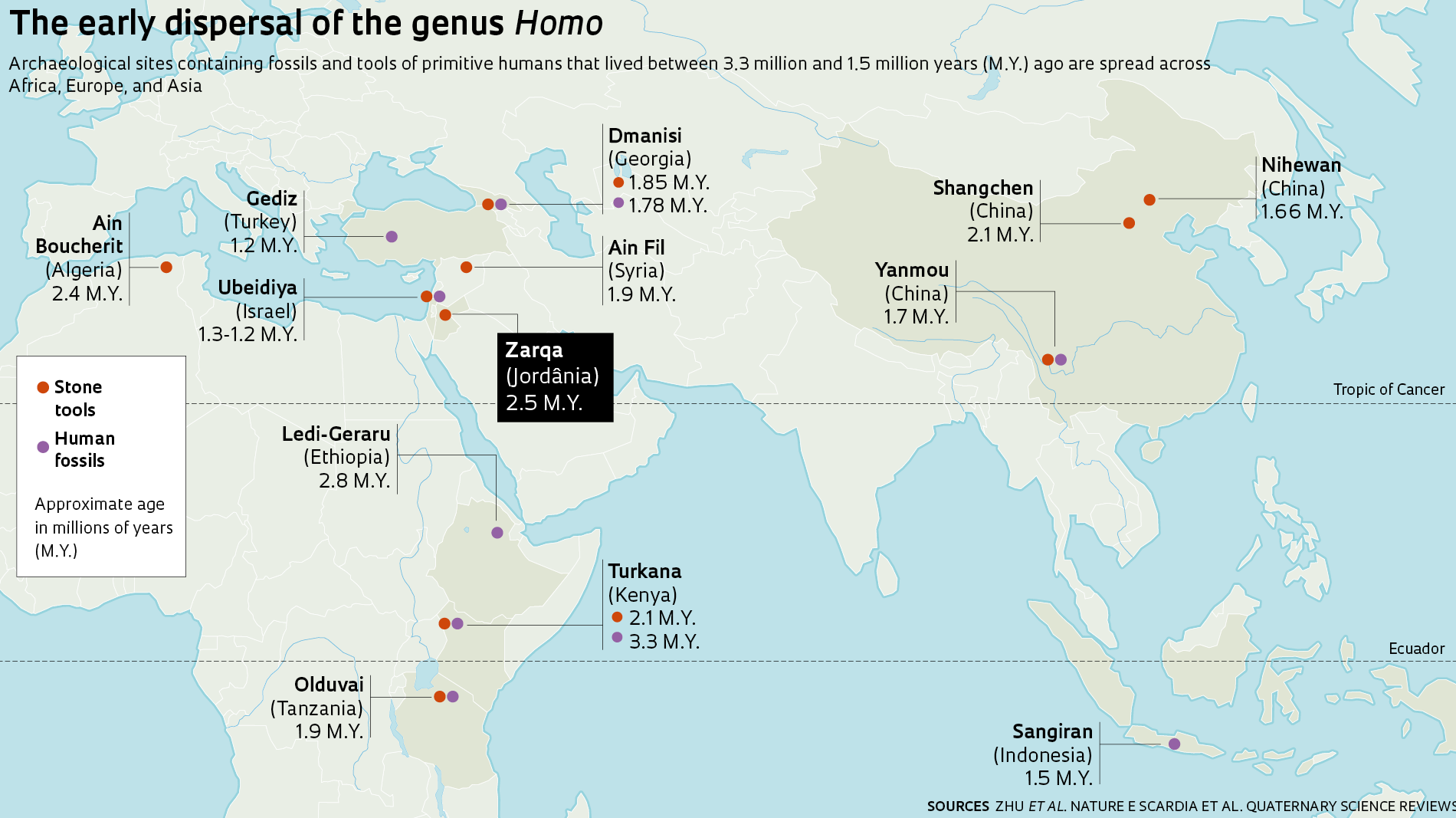 There are also a few sites that seem to tell a more complete story about the beginnings of the dispersal of archaic humans out of Africa, with the presence of stone artifacts and hominin fossils. The best-known and most emblematic case involves the city of Dmanisi, about 90 kilometers from Tbilisi, the capital of the Republic of Georgia, in the Caucasus region, the area where eastern Europe meets western Asia. In addition to revealing a lithic industry and animal fossils, excavations in the region found fragments of hominin skeletons dating back 1.8 million years. They are the oldest hominin bones discovered on a continent other than Africa. The mysterious highlight of the Georgian finds is five skulls of varying size and characteristics, obtained from excavations carried out over the last two decades. To this day there is still no consensus as to which species, or differing species, of hominins these bones belonged to, whether to H. erectus (the more widespread hypothesis), a local form of archaic human, or possibly H. habilis.

Unlike the sites in Dmanisi, those in Jordan’s Zarqa River valley are not well known. Although they were excavated by the French and Italians 30 to 40 years ago (Fabio Parenti himself participated in field work in the area during the late 1990s), they are the subject of few scientific publications. Neves’s team decided to work in the region because Jordan’s location in the Middle East would make it part of a natural passageway for hominins to leave Africa for Asia. However, there is almost no ancient record of hominin presence in the Middle East. “We were very surprised when our dating showed that the oldest geological layers with lithic artifacts were 2.5 million years old,” acknowledges Italian geologist Giancarlo Scardia of São Paulo State University (UNESP), Rio Claro campus, a specialist in paleomagnetism and lead author of the study. “But I don’t think there’s any reason to question our dating.” The three methods used to determine the age of the Dawqara formation (the geological layer) in which the stone artifacts were found were argon isotope dating, uranium to lead decay, and paleomagnetism. The results of the analyses indicated that the region must have been inhabited by hominins for a continuous period of 500,000 years, between 2.5 and 2 million years ago. 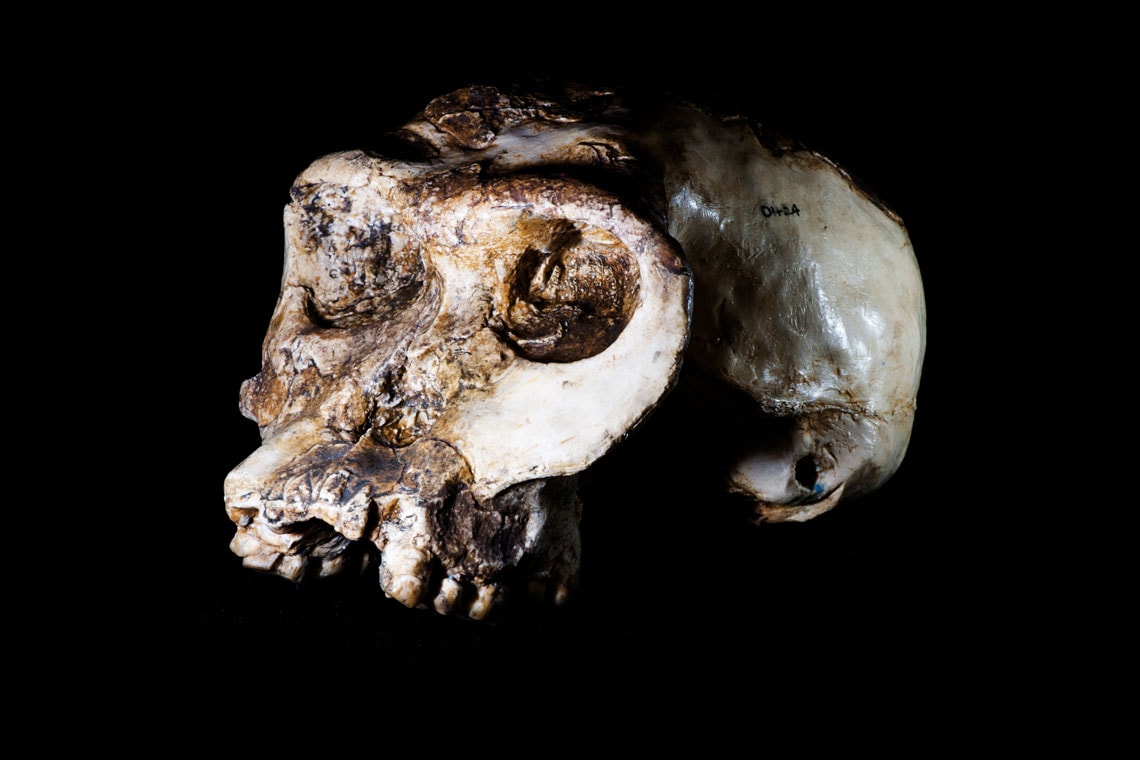 Replica of a skull from Homo habilis, an archaic human species that may have produced the chipped stones found in the Zarqa River valleyLéo Ramos Chaves

Since 2017, Neves, Parenti, Araújo, and Scardia had been trying to get the article with their Jordanian data published in a scientific journal. They submitted the work to four journals without success. In December 2018, Scardia presented a summary of the study at a congress of the American Geophysical Union. At the end of his speech, one of the editors of Quaternary Science Reviews invited him to publish the work in their journal. “We face a lot of resistance,” recognizes Scardia. “I imagine that if we had a well-known researcher at a large foreign university as a coauthor of the study, we would have been able to publish the article more easily.” Neves predicts that the article will be the subject of much criticism from abroad. So far, the work hasn’t had much impact outside Brazil, at least in the press. It may have been overshadowed by another study that was published the same week as our work on the Jordanian finds, regarding the possible discovery of the oldest fossil of H. sapiens found outside of Africa.

“The team that carried out these excavations in Jordan is highly qualified, I see no reason to doubt their results,” observes archaeologist Niède Guidon, president-director of the American Man Museum Foundation (FUMDHAM) in São Raimundo Nonato, Piauí. “Everything is buried, and as new excavations are carried out, we’ll have new discoveries.” In addition to professors from Brazilian universities, the article on the Zarqa valley discoveries was also signed by researchers Daniel P. Miggins of Oregon State University and Axel Gerdes of Goethe University of Germany, both of whom were introduced to Neves by Scardia. About 80% of the team’s work was funded by FAPESP, and the remainder by the Wenner-Gren Foundation for Anthropological Research in New York.