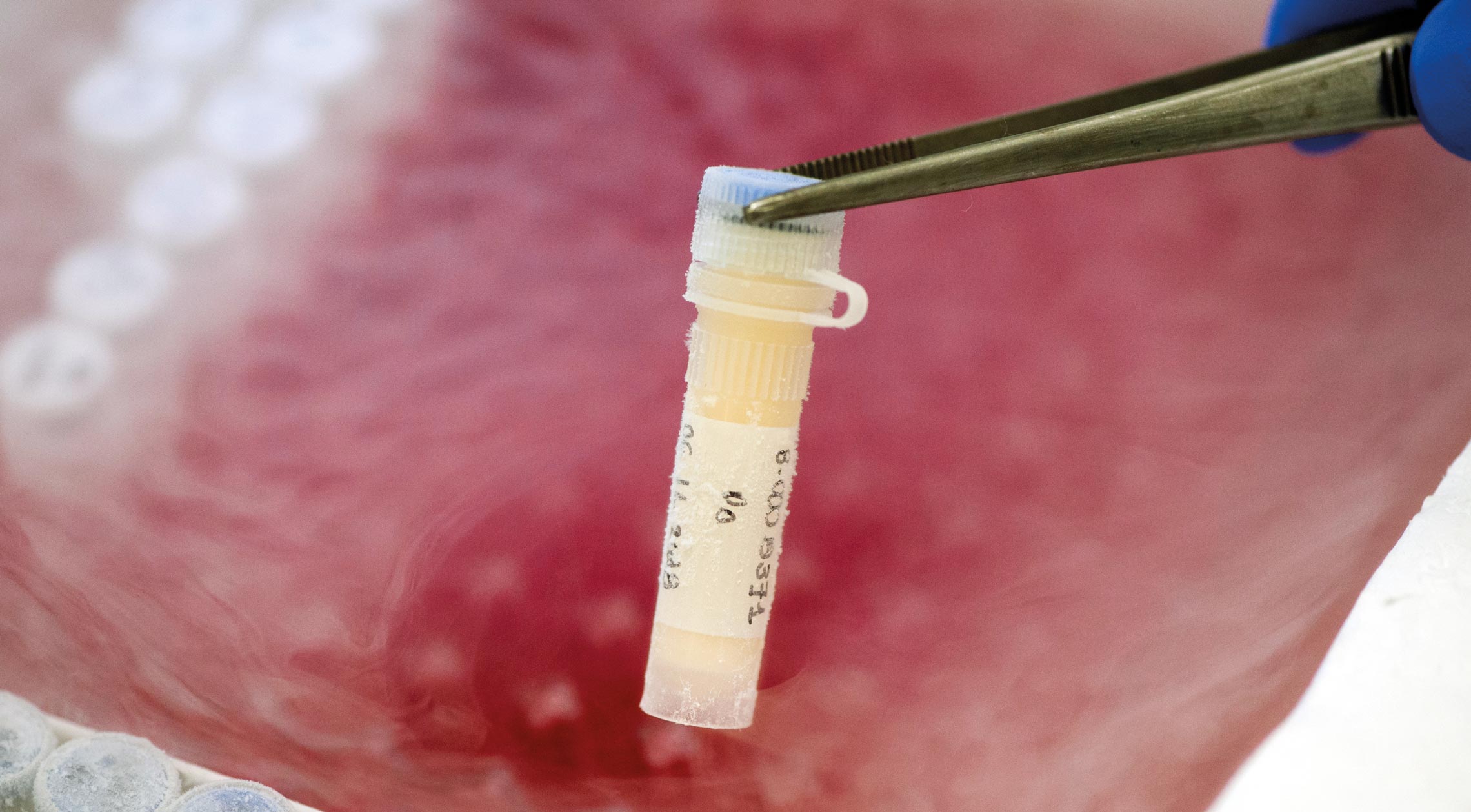 Bringing the laboratory bench closer to the patient’s bedside is becoming a key objective for oncology centers and specialized institutes, as well as general hospitals with sectors dedicated to the study and treatment of cancer. This trend has been verified both in standard public institutions and in private establishments. The Cancer Institute for the State of São Paulo (ICESP), which was established 10 years ago and has cared for 95,000 patients, has quickly built bridges between treatment and research. Since the institute was established, its 25 full-time researchers have published close to 1,000 scientific articles. On the eighth floor of the ICESP facility, which belongs to the government of the state of São Paulo and is located in the state capital, there is a small service elevator that takes you to the 13th and 14th floors, where the hospital’s 18 surgical rooms are located. This is how the tumors removed from patients are transported to one of the laboratories of the Center for Translational Research in Cancer (CTO), where close to 500 diagnoses are made each month. From the pathology laboratory, the material used for diagnosis—now divided into hundreds of samples of tumor cells and tissues preserved on glass slides and paraffin blocks—continues to the biobank. With this information added to the patient’s record, these samples remain available to research projects that are often born from questions posed by physicians that work in treatment.

The path taken by the 23,000 samples of biological material found at the biobank demonstrates the dynamics and philosophy of the work at CTO. “ICESP is making a significant social impact in its work providing care, and the impact of its research is the generation of knowledge. The combination of care and research allows for desired and possible synergies to arise,” comments Roger Chammas, professor of oncology at the University of São Paulo School of Medicine (FM-USP) and coordinator of CTO.

The biobank is one of the principal meeting points for researchers of ICESP and from other institutions. But it is not the only one. The laboratories occupy close to 1,500 m2, representing 60% of the 8th floor, and are shared by researchers from various areas including cellular and molecular biology, genetics, pathology, virology, biotechnology, and epidemiology. When ICESP was created, dozens of researchers dedicated to the study of cancer spread out among various USP sites. “Our plan was to create a structure that would accommodate the samples required and access to advanced technology for all of these research groups, with the docents of the Oncology Department managing the center,” recalls Chammas. That is how CTO came about. 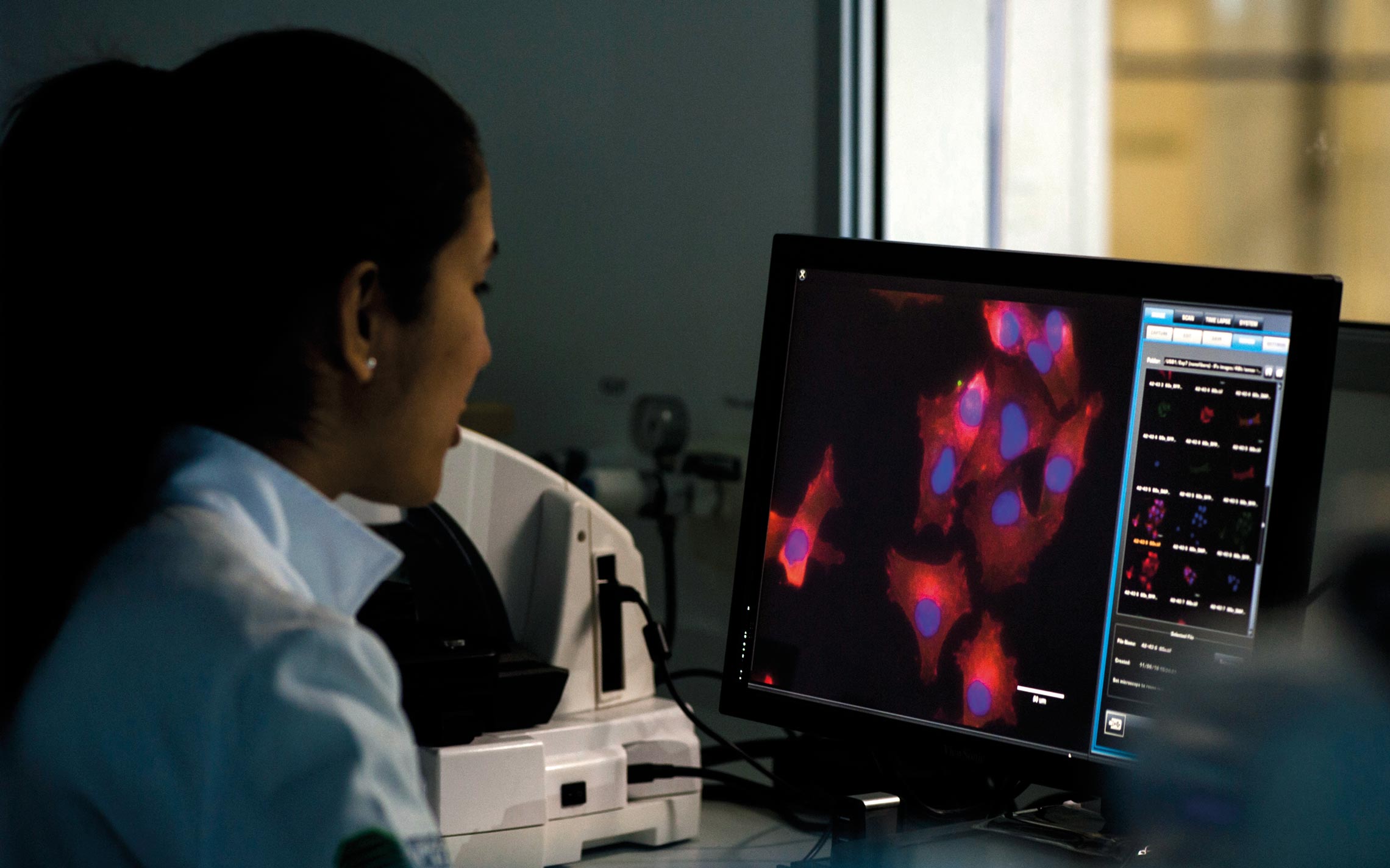 The biobank, which facilitated the planning carried out by the research groups, made it possible to begin material collection prior to receiving funding for the scientific project. “The biobank is a treasure,” confirms physician Maria Aparecida Koike Folgueira, head of the department of radiology and oncology at FM-USP, which leads various studies on genetic and environmental factors in young patients with cancer. “Before, we only began to collect samples after the project was initiated.”

Translational movement
Since 2010, when the CTO structure was built, more than R$73 million was invested in research: R$2.5 million was donated by the Ermírio de Moraes family and used to build the laboratories, with the rest coming from ICESP itself, the National Support Program for Oncology Care (PRONON), the Ministry of Health, and from projects funded by FAPESP. The CTO houses 13 projects, divided into four research programs: therapeutic and diagnostic innovation, molecular oncology, epidemiology, and clinical research and prevention. Chammas avoids making distinctions between basic research and applied research. “We want to answer questions. If the question requires basic research, we go in that direction. Translational research transfers the knowledge generated by the basic area for clinical use, a medical application,” confirms the researcher. “Brazil does not have a history of translational medicine, but this is changing. Researchers are beginning to see that work cannot be done in isolation,” notes American molecular biologist Bryan Strauss, who manages the ICESP Viral Vector Laboratory.

Strauss has been in Brazil since 1998 and leads a genetic therapy project that is aiming to develop a form of immunotherapy for melanoma, the most aggressive form of skin cancer. Using this technique, a neutralized virus is inserted into the patient’s cells and used as a carrier of two suppressor genes for the tumor. “They cause the tumor cells to die and release elements that induce an immunological response against these cells,” explains the molecular biologist. “Thus, the genes ‘teach’ the organism how to protect itself.” In the laboratory, Strauss has the opportunity to analyze the behavior of cancer cells taken from ICESP patients undergoing treatment, which enables him to assess the heterogeneity of the tumors and the differences in response to treatment. At the same time, he is seeking to understand, using rodents, the reaction of the immune system to genetic therapy. In the future, Strauss plans to use dogs in his research. “Cancer in dogs is similar to cancer in humans. Studies with rodents have many limitations,” he explains.

The A.C.Camargo Cancer Center, a private nonprofit institution in São Paulo that is funded by the Antônio Prudente Foundation, also invests in efforts to bring treatment closer to research. According to biochemist Vilma Regina Martins, superintendent of research for the institution, 18 experts are dedicated full-time to research, but there are also professionals on the clinical team who do research and advise postgraduate students funded by the hospital. In total, there are 60 professionals involved in research out of a total of 600 physicians who work for the institution. Last year, 77 postgraduate students completed their degrees and published a total of 182 articles in international scientific journals.

The hospital has an exclusive area for scientific activities—the International Center for Research (CIPE)—a building that is located near the institution’s headquarters and measuring 4,000 m2. In these laboratories, translational research is carried out by groups in genomic and molecular biology, bioinformatics, investigative pathology, immuno-oncology, tumor biology and biomarkers, epidemiology, and biostatistics. “We have participated in clinical trials for the past 10 years,” says Martins. Every year, A.C.Camargo invests close to R$18 million of their own funds into research, in addition to R$4 million raised from funding agencies and other sources.

In October 2017, a new research group was launched, led by American immunologist Kenneth Gollob, who has been based in Brazil for 20 years. His team monitors close to 300 patients, primarily cases with tumors in the lungs, stomach, head, and neck, as well as melanoma, and who have received some form of immunotherapy recognized by the Brazilian Health Regulatory Agency (ANVISA) with the goal of observing the response of each during treatment. “Close to 25% of oncology patients respond well to this therapy. Many suffer from side effects that we are not yet able to control. But, for those who undergo immunotherapy, the response is very good. We have patients who had a prognosis of two months to live and who, after treatment, are still alive more than five years later,” reports Martins. “Each year, immunotherapy is approved for more types of tumors.” 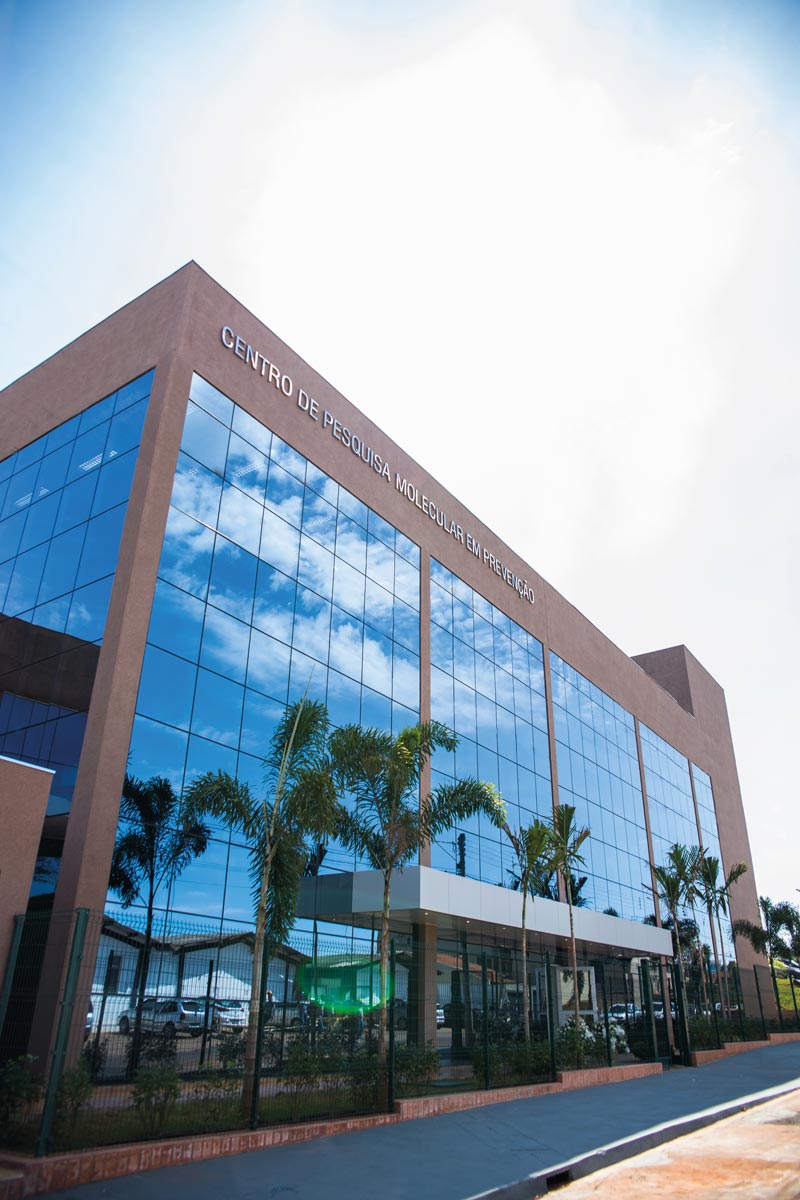 Personlized therapy
At the Sírio-Libanês Hospital—a private institution headquartered in São Paulo—the Teaching and Research unit is also focused on research that has the potential to be moved from the bench to the medical clinic. “The first question we want to answer is how to identify changes that can lead patients with the same kind of tumor to present different responses to treatment,” confirms biochemist Luiz Fernando Lima Reis, director of the unit. He says that 100% of current studies are focused on the identification of biomarkers that can support therapy selection. “We have two lines of research: the search for tumor changes to support treatment decisions and early diagnosis of resistance to certain drugs,” explains Lima Reis.

Also in the state of São Paulo, the newly named Hospital de Amor (formerly the Cancer Hospital of Barretos), has for the past eight years funded the Teaching and Research Institute, with links to its postgraduate program in oncology. There are four lines of research: palliative care and quality of life, epidemiology and prevention, clinical and surgical oncology, and molecular oncology and pathology. According to molecular biologist Rui Manuel Reis, scientific director for the Teaching and Research Institute, more than 200 professionals are involved in scientific studies, of which 30 are postgraduate program advisors and 10 are full-time researchers. The building offers them an area measuring 3,000 m2 which includes the Dr. Ricardo Renzo Brentani Tumor Bank. “Today we have more than 220,000 samples of tumor tissue, blood, and other fluids of more than 40,000 patients, collected between 2006 and 2018. These samples are extremely valuable for translational medicine,” confirms Reis. 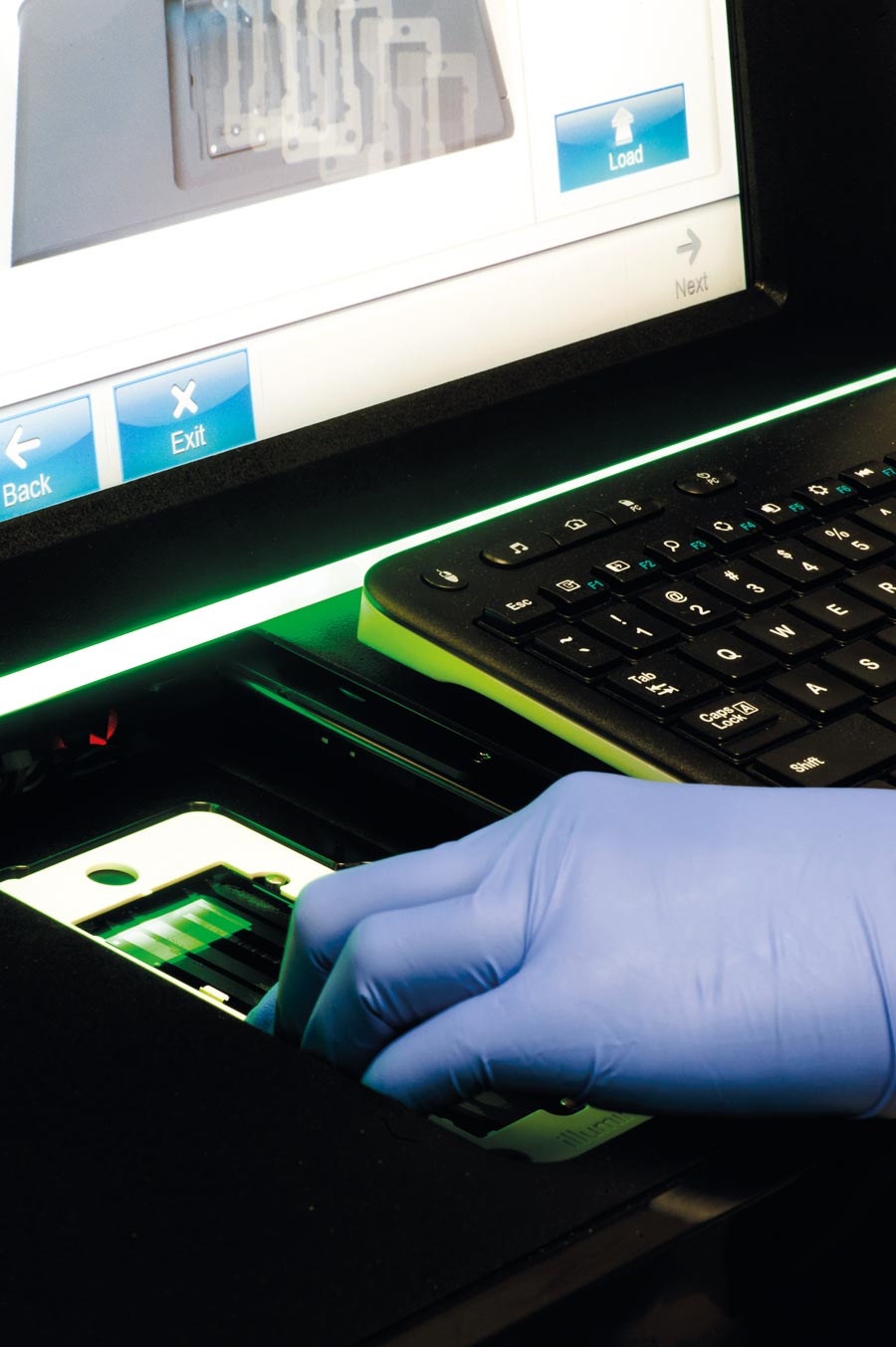 He explains that the biobank has been fundamental in providing support to genomic research, which aims to map genetic changes in order to develop personalized cancer therapy. “The majority of the drugs we use were developed for the profile of foreign patients. Few studies explore the genetic profile of the Brazilian population,” notes Reis. The Hospital de Amor is involved in various national and international research consortiums, such as the International Cancer Genome Consortium (ICGC), which includes representatives from 16 countries. In this consortium, the project developed by Brazilian researchers is carrying out the genetic mapping of melanoma.

The studies carried out by the Hospital de Amor, whose patients are always serviced by the Brazilian Unified Health System (SUS), depend almost exclusively on grants from funding agencies. Today, close to R$10 million has been allocated to teaching and research. In 2015, the institution received funds from a large labor agreement that ended in Brazil.

Shell/BASF had to pay damages to employees, in addition to compensation of R$200 million, as the result of a lawsuit by the Brazilian Ministry of Public Service against its Campinas factory for having caused occupational illness. The funds were applied to eight nonprofit units that provide services to SUS. The Hospital de Amor received R$70 million that was invested in three initiatives: the construction of the Molecular Research Center for Prevention in Barretos and the Institute for Prevention in Campinas, both of which were inaugurated in 2017, as well as the acquisition of four trucks to operate as mobile clinics to carry out free cancer testing, and to deliver educational programs.