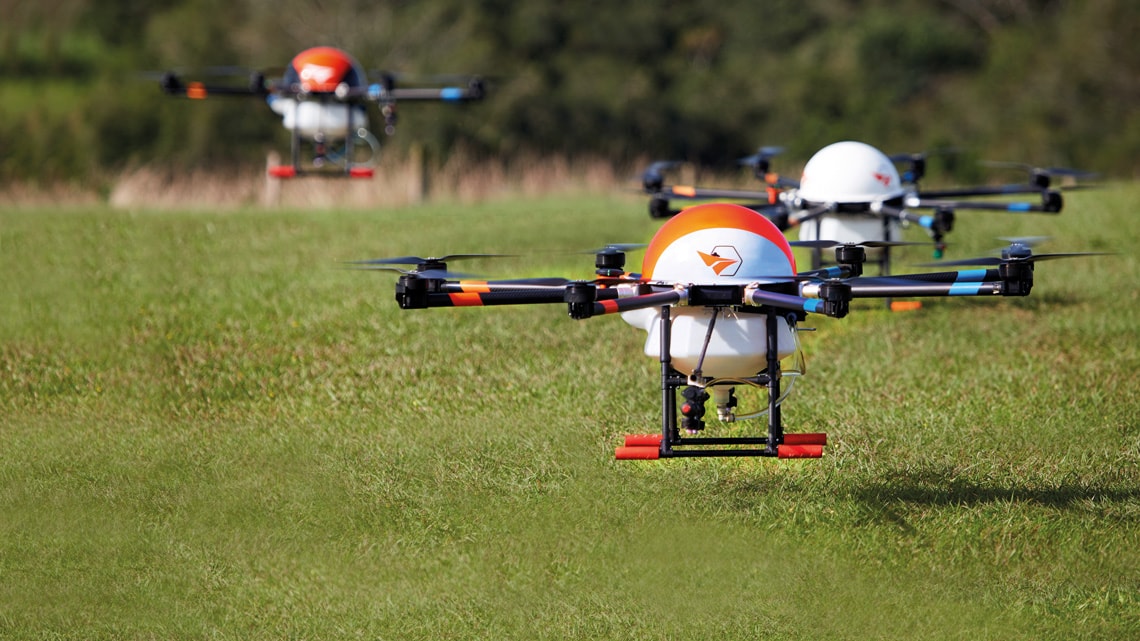 A relatively new technology has been gaining popularity in Brazilian agriculture. Two years ago, farmers began using drones to spray pesticides on their crops, including eucalyptus, sugarcane, orange, coffee, and rice, especially in the south and southeast of the country. These devices, which are yet to be legally regulated, could increase the aerial application of pesticides, currently carried out in Brazil mostly by airplanes. Experts argue that drones could help to minimize one of the main problems with aerial pesticide application: the amount of the product that does not reach the crop, known as drift.

“I believe there will be an explosion of new technologies for unmanned spraying over the next few years,” says electrical engineer Lúcio André de Castro Jorge, a researcher at the Brazilian Agricultural Research Corporation (EMBRAPA) in São Carlos, São Paulo State. He is part of a group working with the Ministry of Agriculture, Livestock, and Supply (MAPA) on regulations for the area, scheduled for publication later this year. “These aircraft are growing in popularity in Brazil, especially to replace backpack spraying,” he says, referring to the equipment worn by workers who walk around fields spraying crops.

Drones, also called unmanned aerial vehicles (UAVs) or remotely piloted aircraft (RPAs), featured heavily at the Brazilian Agricultural Aviation Conference held in Sertãozinho, São Paulo State, in August. “The drone forum was very crowded,” says Gabriel Colle, executive director of the National Union of Agricultural Aviation Companies (SINDAG). He does not believe drones will compete with or replace agricultural planes, however. “The drone has a complementary function,” he says, emphasizing that for large areas, airplanes are still the most economical option. Brazil has the world’s second-largest agricultural aviation fleet, with 12 helicopters and 2,182 planes, most of which are Embraer Ipanemas. The USA is top, with over 4,000 aircraft.

Planes are responsible for applying pesticide to 7% of the total sprayed area in Brazil, which is estimated at 375.3 million hectares, according to the publication Cenários Agrícolas Brasileiros (Brazilian agricultural scenarios), put together by the Prohuma Institute for Scientific Studies, a consortium formed by companies from the pesticide sector and supported by MAPA. Most pesticide is applied by land (62%, or 232 million hectares), using machines such as tractors. SINDAG disputes these figures and estimates that airplanes account for at least 15% of the area sprayed with pesticide.

“In the major markets worldwide, pesticide application using 100% automated flight is not permitted. The use of a remote pilot, who remains in visual contact with the aircraft, is mandatory,” says agronomist Ulisses Antuniassi, from the School of Agronomic Sciences at São Paulo State University (UNESP) in Botucatu, São Paulo State. “The rules being prepared by MAPA follow the same principle.”

A law was also passed in the state of Ceará this year that prohibits aerial pesticide spraying due to the harm it can cause to the environment, rural workers, and residents living close to the crops. The rule is being contested by the Brazilian Confederation of Agriculture and Livestock (CNA) at the Brazilian Supreme Court (STF). Ceará was the first state to ban the activity, which has also been prohibited in the European Union since 2009, except in exceptional cases, such as for hard-to-reach crops.

While legislation on the subject is being drawn up, companies are developing operational routines and analyzing the costs of drone spraying. The approach is also being investigated by research institutions. EMBRAPA took part in an experiment on a coffee farm to verify the viability of the technology in partnership with mining company AP Agrícola. “The drones were especially effective in hard-to-reach areas such as hillside forests,” says Castro Jorge. “The droplet quality and the result are both exceptional.”

In the test, we compared sprays by airplane, helicopter, and drone. “The quality of the drone spray was superior,” concludes the EMBRAPA researcher. According to him, the flight conditions and the ability to apply the spray mix in a more concentrated manner helped reduce the amount of product not reaching the target crop by about five times. The spray mix is the combination of the pesticide itself with water or other chemicals called adjuvants, which give specific properties to the pesticide droplets—their shape, volume, and size, among other characteristics, all alter the effectiveness of the application.

Another experiment was conducted in Rio Grande do Sul in June by SkyDrones, one of the pioneers of aerial spraying UAVs in Brazil. The company conducted simulations with their Pelicano models, which are capable of flying together as a swarm. “Multiple devices operate together as a unit,” says Daniel Estima Bandeira, chief financial officer at SkyDrones. “The method could increase productivity in the field.” The tests were performed in partnership with Israeli agriculture technology company SkyX. SkyDrones works with forestry clients and rice, corn, and soy producers in the south of Brazil, including São Paulo.

Unlike agricultural airplanes powered by aviation gasoline or ethanol, drones run on electric batteries. They carry a small volume of pesticide, just 8 to 10 liters, compared to the 800-liter capacity of some aircraft, and have a shorter range. The need to continually refill them can increase operation costs.

In São Carlos, São Paulo State, a group led by Jó Ueyama of the Institute of Mathematical and Computer Sciences at the University of São Paulo (ICMC-USP) has filed two patent applications relating to the use of drones in agriculture. The research was funded by FAPESP. The first patent is for an intelligent, autonomous agrochemical drone spray system and application-monitoring technique. The second is for a system that spreads biological pest control agents to fight citrus greening, a disease that attacks orange trees. 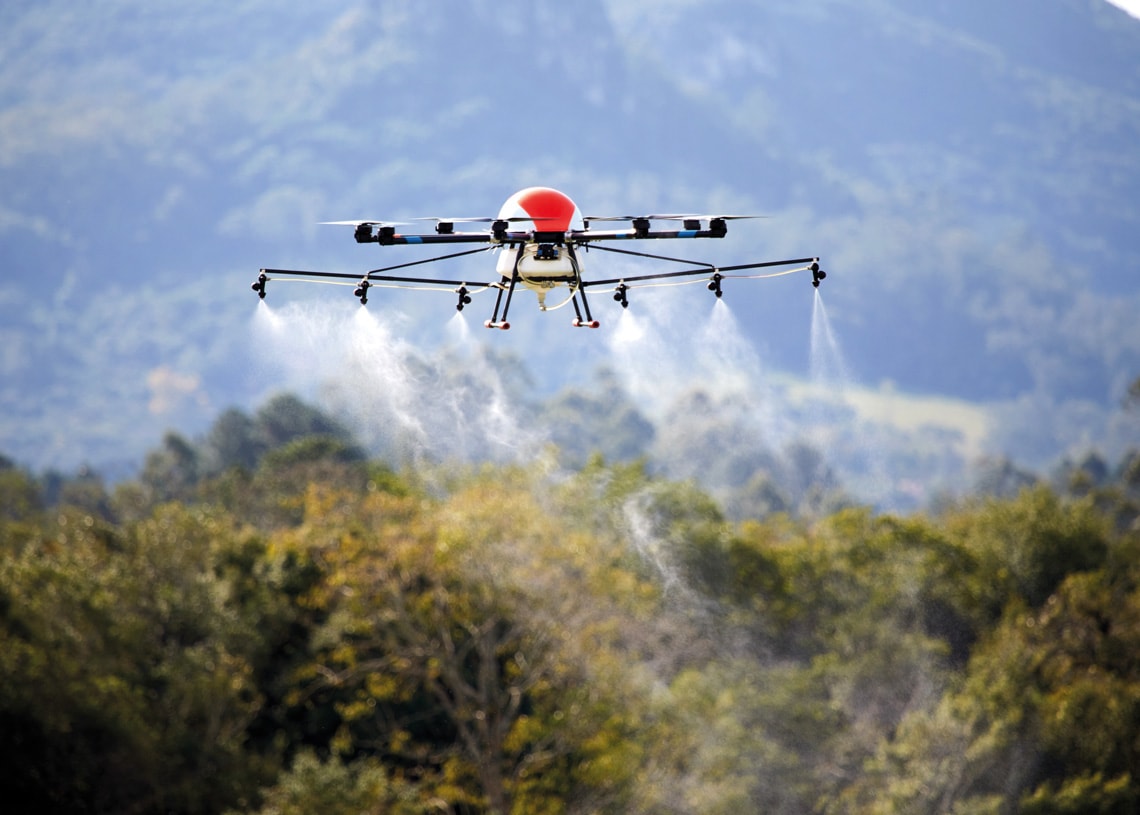 In the study that led to the patent, a drone released biodegradable cardboard cups containing about 200 parasitoids (Tamarixia radiata), the natural enemies of the disease. “Before releasing the cup, the machine makes three holes in the lid to allow the parasitoids, provided by the Fund for Citrus Protection [Fundecitrus], to escape and begin hunting for their natural prey,” says Ueyama. The prey, in this case, is the insect Diaphorina citri, a vector of the bacterium Candidatus liberibacter spp., which causes greening disease.

Egg release
With funding from the FAPESP Technological Innovation in Small Businesses (PIPE) program, NCB Sistemas Embarcados, from São José dos Campos, São Paulo State, has also created a line of biological pest control products that use drones. “Our focus has always been on developing equipment for agricultural automation,” says Fernando Nicodemos, CEO of the company, which was founded in 2006. Six years ago, it began operating in the biological control sector. “We have changed the market niche to widen the range of options.” Today, as well as its clients within Brazil, NCB does business in Guatemala, Colombia, France, and Italy.

Its main product, BioBOT, is an electromechanical system that can be installed in any type of drone to release parasitized eggs en masse. It is controlled by GPS via an embedded processing unit equipped with hardware and software developed by the company. The processing unit uses artificial intelligence to plan, monitor in real time, and release biological pest control agents. The eggs contain wasps that will hatch after release and fight off the insects that attack the crops.

The growing use of drones for pesticide application is a response to demands among agricultural companies, farmers, and researchers for new technologies to make the sector more efficient and accurate, reducing product loss and drift. Experts such as agronomist Aldemir Chaim, from EMBRAPA, classify drift as either endogenous (the part of the product that is not retained by the plant and soaks into the ground) or exogenous (the part carried outside the spray area by the wind).

“There is a set of 20 factors that determine the risk of drift during application, including spraying technique, product type, droplet size, and adjuvants,” explains agronomist Ulisses Antuniassi, from UNESP. He notes that in Brazil, aerial pesticide spraying is regulated and overseen by MAPA.

For geographer Larissa Mies Bombardi, from USP’s School of Philosophy, Languages and Literature, and Human Sciences (FFLCH-USP), author of the atlas Geografia do uso de agrotóxicos no Brasil e conexões com a União Europeia (Geography of pesticide use in Brazil and connections with the European Union), pesticide application by any kind of aircraft is problematic. “Firstly, there is no safe method. That is why it is not permitted in the European Union,” she warns. “On top of that, enforcement is lax. There are not enough inspectors. Reports of contaminated schools, watercourses, indigenous areas, and rural communities are common.”

Carlos Venâncio, general coordinator of pesticides at the Ministry of Agriculture, says: “From the ministry’s perspective, aerial spraying is more enforced than any other application technique, and has advantages and risks like any other.” According to Venâncio, there are 40 inspectors working for Federal Agriculture Departments nationwide. “We are working to increase the use of surveillance technology to enable remote monitoring of agricultural aircraft,” he says.

By July, 262 new pesticides had been registered in Brazil this year. If registrations continue at the same pace, the total by the end of the year will exceed the 450 approved in 2018. The Brazilian Ministry of Agriculture (MAPA) reported that the increase has resulted in the approval of many products that are less toxic and more environmentally friendly than those previously used. Most approvals, according to MAPA, are generic versions of products already in use. But some are for products that have never previously been approved, including the insecticide Sulfoxaflor, which can be harmful to bees.

The government has also changed the toxicological classification of the products. The new regulatory framework follows the Globally Harmonized System of Classification and Labelling of Chemicals (GHS), an internationally agreed-upon standard, with product labels clearly showing the risk of death presented by the substance.

“The previous method of assessment focused on acute toxicity, but the new approach is even worse—only fatal substances will be classified as extremely toxic,” says USP geographer Larissa Bombardi. “With this new classification system, the number of pesticides deemed extremely toxic dropped significantly.”