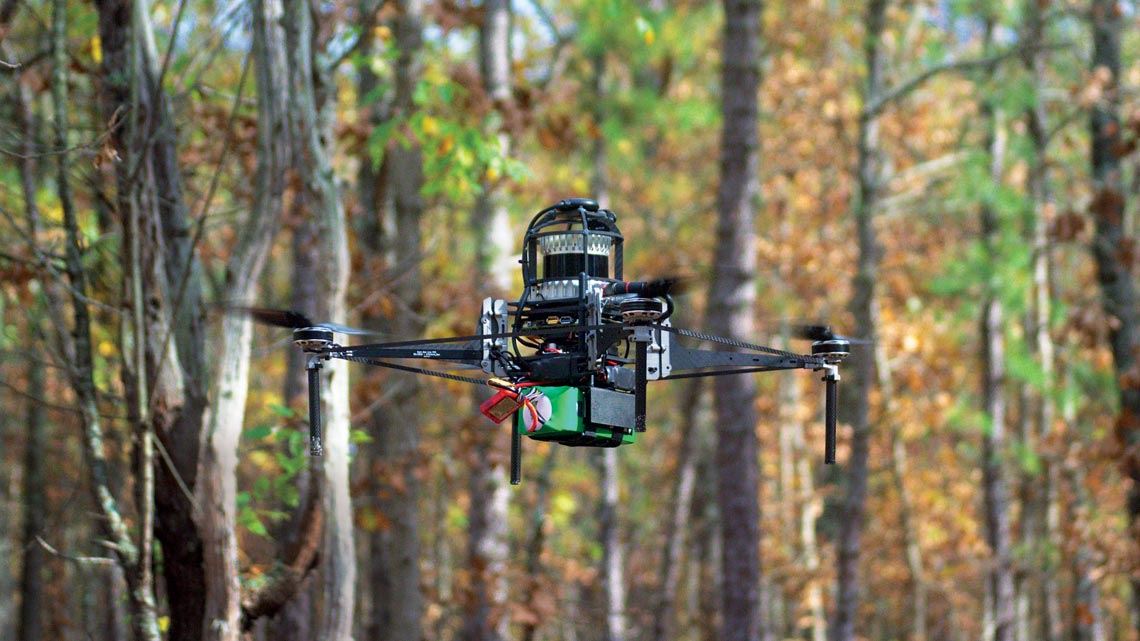 There are 4.9 million square kilometers (km2) of forest in Brazil—an area larger than all of the countries in the European Union put together. For a long time, the only way to monitor these vast biomes and understand their biological richness was with satellites far above the forest and people immersed within it. In recent years, a new technology has arisen that can contribute to this mission: unmanned aerial vehicles (UAVs), also known as remotely piloted aircraft (RPA), or more commonly, drones.

These flying machines are now being used for a range of tasks, including to identify areas of deforestation, monitor logging, calculate the volume of logs removed from an area, prevent fires, and catalog forests, which consists of collecting data on the plant species found in a given area.

“Technologies for imaging trees and other plant species and for measuring vegetation volume, including LIDAR [light detection and ranging] and infrared sensors, have been around for some time. The innovation is embedding these systems in a drone, which can fly and hover close to the top of the forests,” explains physicist Marco Aurélio Nalon, a researcher at the Forest Institute (IF) of São Paulo. “Because these devices are equipped with GPS, you can program a flight schedule in advance and geolocate each tree photographed.”

Head of the São Paulo State Forest Inventory, Nalon has been testing the use of drones in partnership with the state’s Botany Institute, which has been purchasing the devices to catalog forests. Forest inventories are essential to understanding biodiversity and monitoring tree health and forest development—tasks that are increasingly important given that deforestation in the Amazon has increased by almost 10% in the last year alone and was 70% higher than the average over the last decade. Studying and preserving forest cover is also fundamental to the planet’s ecological balance. As well as storing carbon and retaining heat from solar radiation—both of which are crucial to controlling the greenhouse effect—forests help regulate the global climate by influencing atmospheric humidity levels and preventing extreme temperature variations.

The traditional method of using satellite images can determine the geographical boundaries of a forest, but it does not provide the detail needed to identify species or data related to the conservation status and productive potential of certain trees. Collecting data on the ground using a large team to observe and catalog species, however, is a slow, tiring job, often limited by the density of the forest. In such cases, the standard procedure is to survey a small area and extrapolate the results, generating an estimate for the entire forest. “With a human survey done at ground level, it is very difficult to paint an accurate picture of species distribution,” emphasizes the IF researcher.

The advantage of drones is that they can perform the same task as satellites, while flying close to the canopy. It is hoped that in the near future, they will also carry out the work of humans, quickly traversing the interior of the forests. In both cases, the image detail and volume of information obtained are superior to previous methods and cost less.

Locating a tree, identifying its crown, and classifying the species, all carried out by an algorithm created at EMBRAPA Acre: abiu, yellow ipê, and cumaru (left to right)

“Drones combine all the features of a classic aerial survey, but with the latest technology and very high-resolution images,” says Nalon. “If an aircraft accurately maps the species and their location, we can identify which ones are growing close to each other and better understand the relationships between them. We can also find out which animals frequent the forest and the amount of carbon stored in it, which is important for battling climate change.”

The Acre branch of the Brazilian Agricultural Research Corporation (EMBRAPA) is a pioneer in the use of drones to monitor forests in Brazil. Agronomist and engineer Evandro Orfanó reports that the institution has been implementing precision forest management with drones since 2015. “These devices give us a different perspective, allowing us to observe the forest from above, through the canopy. But to ensure the quality of this approach, we had to solve a problem: how to deal with variations in the size and shape of the treetops throughout the year,” explains Orfanó.

According to him, many species like the Brazil nut tree, which is lush and leafy with a fully formed crown in January (the rainy season), lose their leaves in July and August, the driest period, drastically changing the canopy. To make the mapping process more efficient, Orfanó and three other researchers from EMBRAPA Acre created a forest inventory calendar, detailing the best times to identify the main groups of Amazonian species.

The guidelines from the calendar were used to configure an artificial intelligence (AI) algorithm that processes images captured by the drones. The system processes the images, identifying variations in the shape of different species’ crowns throughout the year, and outputs an immense volume of detailed data at great speed. “Each species has a month or a set of months when it is easiest to locate and identify,” says the researcher.

The procedure for characterizing species based on the shape of their crowns begins with defining the perimeter that the drone will cover during its flight, which is only performed on dry and sunny days. “Our device covers 1,200 hectares [12 km2] per day, with an image detail level of up to 3 centimeters,” says Orfanó. “The high definition of the image, together with georeferencing via GPS, gives us details of the tree crowns and their location in the forest.”

Data obtained with these technologies still requires human analysis. For example, if the drone identifies that certain regions of the forest are suffering water stress or problems caused by fungi, insects, or other factors, a team visits the area in person, with a well-defined target, to see what is going on. “It is humans that refine the mapping,” completes the EMBRAPA researcher.

The institution is also using drones to find out how much wood has been extracted, based on sustainable criteria, from national forests. “In Jacundá, in the state of Rondônia, the volume of logs stored annually in the forest’s yard used to be calculated by four workers using a wheel loader—it took 45 days. With the drone, the same task now takes eight minutes of flight and four hours to process the captured images,” says Orfanó.

Another Brazilian researcher participated in the construction of a drone, designed at the University of Pennsylvania (UPenn) in the USA, which can fly among the trees under the canopy. With funding from FAPESP, computer scientist Guilherme Nardari spent part of 2019 working at UPenn’s General Robotics, Automation, Sensing, & Perception Lab (GRASP) on a drone that can fly through planted forests (those established through human planting or deliberate seeding) taking three-dimensional (3D) images.

Nardari was a member of the team behind the software that allows it to fly around obstacles, in addition to capturing, storing, and processing images of the forest. The research is part of his PhD in computer science and computational mathematics at the Institute of Mathematical and Computer Sciences (ICMC) of the University of São Paulo (USP), in São Carlos. “Our experiments were carried out in planted forests, which are more standardized, with more widely spaced trees. They are therefore a good first step for testing and evaluating the robot’s autonomous capablities,” says Nardari.

The UPenn drone weighs 3.5 kilograms (kg), including the weight of the LIDAR sensor, and has a flight range of 20 minutes. In this short time period, it can map an area of about 265,000 square meters (m2)—roughly equivalent to 26 city blocks—a task that would take a team of forest engineers 200 hours or 25 eight-hour working days to complete.

Nardari, who was supervised by Indian mechanical engineer and robotics specialist Vijay Kumar during his time at UPenn, explains that the laser radars scan in all directions at once. When they hit an object, the beams bounce back to the sensors, which create a three-dimensional, 360-degree map of the environment. Detailed, 3D images of the forest from the inside can be used not only to calculate the logging potential, but also to measure carbon retention capacity.

Roseli Aparecida Francelin Romero, Nardari’s supervisor and head of the Robot Learning Laboratory at ICMC-USP, highlights the originality of his PhD research proposal. “The use of advanced AI models embedded in the drone control system, analyzing thousands of points captured by the laser sensor in fractions of a second to estimate the number of trees in a forest and the volume of wood available—while still avoiding obstacles autonomously—is unprecedented,” she says.

During the project, the team also considered another application: fire prevention. Until recently, the images of the forest floor were discarded. The artificial intelligence algorithm was trained to ignore this information—to save storage space and allow tree data to be processed more efficiently. But after talking to forest authorities, Nardari and his colleagues discovered that the ground provides important information for fire prevention. The more foliage and branches on the forest floor, the greater the risk of fire.

The group also plans to combine images of the inside of the forest with others taken from above. “We intend to use lighter and cheaper sensors, which can be installed on smaller drones, to map denser forests, reducing costs,” says Nardari.

The researcher points out, however, that it is difficult to know whether the technology in its current state would work in a natural forest, where there is much less space for the drone to fly. “Forestry experts have told me that even for humans it  is sometimes difficult to move through very dense forests. We are trying to understand the problem and how we will have to adapt the algorithms and the hardware. This is our current challenge.”