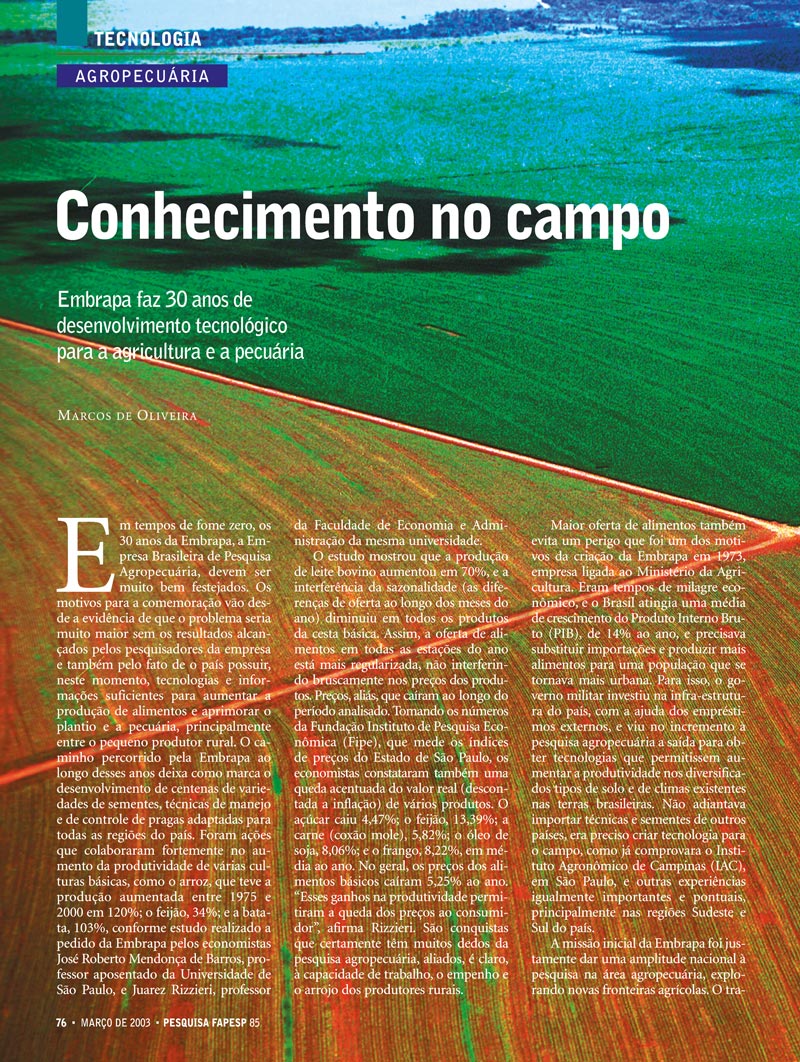 Pesquisa FAPESP has published a range of articles on bacteria-based products, such as this one in issue no. 85

Brazil’s soy industry owes a great deal of its commercial success to seminal biological nitrogen fixation (BNF) research conducted in the 1950s by crop scientists Johanna Döbereiner (1924–2000) and Ruy Jardim Freire (1923–2015). Döbereiner, a researcher at the Brazilian Agricultural Research Corporation (EMBRAPA), faced significant resistance to her proposed use of BNF at a time when massive application of nitrogen was the norm in soy farming (see Pesquisa FAPESP issue nos. 58 and 88).

But in the following decade, inoculants—microbial products that can absorb nitrogen from the air and transfer it to the roots of plants, reducing the need for chemical nitrogen fertilizers—were rapidly adopted at large scale in soy farming. This was thanks to EMBRAPA’s efforts to select strains of Rhizobium bacteria (commonly known as rhizobia) that are adapted to Brazil’s soil, climate, and soybean genotypes (see Pesquisa FAPESP issue no. 85). Pesquisa FAPESP has extensively covered research into biological nitrogen fixation and the development of soybean inoculants over the past 20 years.

In that space of time, inoculant technologies have developed to a point where symbiosis with soybeans can fully substitute for the use of nitrogen fertilizer. Experts say that the soy industry in Brazil owes its competitiveness, to a great extent, to the use of efficient inoculants. “Without inoculants and biological fixation, soy farming would not be economically feasible in Brazil today,” says crop scientist Mariangela Hungria, of the EMBRAPA Soy division in Londrina, Paraná.

In the 2000s EMBRAPA launched a new class of microorganisms formed by plant-growth-promoting bacteria. The most commonly used bacterium is Azospirillum brasilense, which also promotes biological nitrogen fixation, although not as effectively as Bradyrhizobium. Azospirillum supports plant growth primarily by producing phytohormones. “Plant roots often grow twice as large with the product,” says Hungria. “This allows them to absorb more water and nutrients from the soil, and even take up fertilizers more effectively.”

In a recent experiment at EMBRAPA’s Amazon chapter, scientists demonstrated that inoculating A. brasilense bacteria alone onto maize seeds generated nitrogen fertilizer savings of 20 kilograms per hectare and double the average crop yield for the state. “Fertilizer prices are high in the region due to shipping costs, making it important to find alternatives to chemical fertilizers,” says crop scientist Inocencio Junior Oliveira of EMBRAPA’s West Amazon chapter.

Co-inoculation
In 2014, EMBRAPA launched a co-inoculation technology that allows both types of bacteria to be applied together before planting. According to EMBRAPA, the use of the two microorganisms combined increases average yields by 16% compared to inoculation of Bradyrhizobium alone. Eduardo Sampaio Moreira Piegas, a farmer in Mococa, São Paulo State, has used co-inoculation technology for around 20 years. “I have never planted soybeans without inoculants, and as a result I use much less nitrogen fertilizer than is typically needed,” he says.

The increasing use of inoculants has helped to improve crop yields, but has also come with challenges. One of these challenges is reconciling the use of bacteria with the pesticides applied to seeds—pesticides often destroy microorganisms that are beneficial to plants. Another problem is home-made inoculants. “This is a very serious problem. We have seen many farmers attempt to make organic products on their own on their farms,” says Mariangela Hungria. “The home-made inoculants we have analyzed contain everything but the target bacteria. In some concoctions, we found pathogens such as Klebsiella e Staphylococcus. These inoculants can cause diseases in plants, people, and animals,” she cautions.