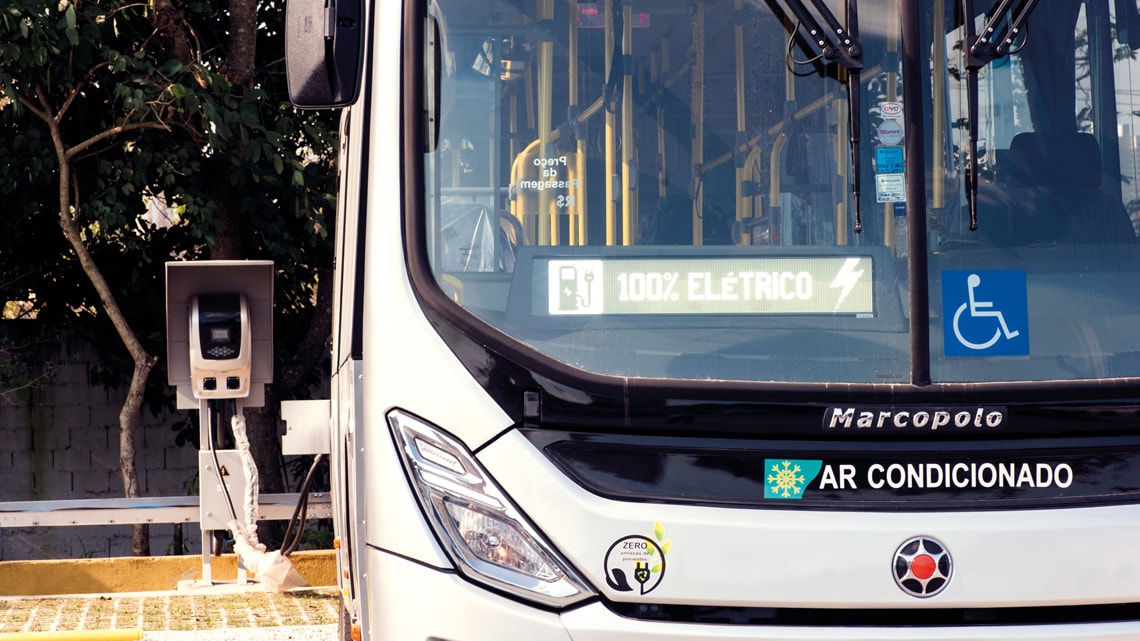 São Paulo, the largest metropolis in South America, has a complex urban public transport network that includes 14,076 diesel-powered buses and 201 trolleybuses—electric vehicles powered by overhead wires. Next month, a new vehicle could be seen on the streets of the city—a new fleet of fifteen 100% battery-powered electric buses is to begin operating on an experimental basis, the first of their kind in the capital. The vehicles will follow a 29.7-kilometer (km) route back and forth in the south of the city, managed by transportation company Transwolff. “This is a great opportunity for us to monitor the daily performance of the vehicles under rigorous operating conditions,” says Simão Saura Neto, superintendent of automobile engineering and special mobility at SPTrans, which is responsible for São Paulo’s public transport system.

The experiment, which could serve as an important benchmark for expanding the use of electric buses around Brazil in the future, is being followed with interest by bus manufacturers, auto part and battery suppliers, electricity companies, municipal managers, and transportation specialists. The local government intends to assess the reliability of the vehicles—which will need to drive more than 200 km per day without recharging—as well as the electricity supply infrastructure, the environmental impact, and the economic feasibility of maintaining a battery-powered fleet.

The effort to replace diesel vehicles in São Paulo is motivated by new legal requirements. In 2018, Municipal Law 16.802 established that vehicles used for public transport must reduce their carbon dioxide (CO2) emissions by 50% within 10 years, and by 100% within 20 years. Exhaust particulate matter (PM) must fall by 90% and 95% respectively, and nitrogen oxide (NOx) emissions must be reduced by 80% and 95%.

“Fuels such as ethanol and biogas are compliant with the 10-year targets, but only electric and hydrogen vehicles meet the 20-year target of zero emissions,” says Saura Neto. He notes, however, that hydrogen vehicles are still unfeasible due to their cost, at around R$3 million per vehicle. Trolleybuses, despite having been used in the city since 1949, are not a particularly attractive alternative. Maintenance of the overhead power supply network is costly and the vehicles can only travel on specific roads and routes, making them operationally inflexible.

Mechanical engineer Paulo Henrique de Mello Sant’Ana, a professor at the Center for Engineering, Modeling, and Applied Social Sciences at the Federal University of ABC (CECS-UFABC), is studying the potential social and environmental impact that a gradual change from diesel to electric buses in São Paulo could provide by 2038. His research group takes into account not only the pollutants emitted by vehicle exhaust—which is zero for electric buses—but also the emissions generated along the electricity production chain, a concept known as “well-to-wheel.”

A recently defended master’s dissertation by one of his group members concluded that replacing São Paulo diesel buses with battery-powered electric vehicles would reduce NOx emissions by 19,000 tons and PM by 78 tons—a reduction of 45% and 19% respectively. The calculations were based on the average age and the service life of the city’s fleet in 2018. “In the future, the more renewable the energy mix, with sources such as wind and solar, the lower the total emissions electric vehicles will produce,” says Sant’Ana, clarifying that the electricity used to charge vehicle batteries should one day come from more environmentally friendly sources.

As well as being more eco-friendly, battery-powered buses have significantly lower operating costs. “Fuel costs are on average five times lower than diesel vehicles,” says Ricardo Takahira, deputy coordinator of the Hybrid Electric Vehicle Technical Committee at the Brazilian Society of Mobility Engineers (SAE). In an electric engine, 95% of the energy input is transformed into wheel propulsion, while in a traditional combustion engine, the efficiency rate is just 35%—the higher this figure, the more efficient the energy source, be it electricity, biofuel, or fossil fuel. Maintenance costs are also lower, as the engines have fewer moving parts. There are no pistons or spark plugs, and no lubricating oil is needed.

The initial outlay of purchasing an electric bus, however, is much higher. While a 13-meter (m) diesel-powered bus with capacity for 80 passengers costs around R$600,000, the electric equivalent is more than double the cost at R$1.3 million. The battery accounts for half of this value. And there are other expenses too. The transport companies have to install charging points in their garages and adapt their electrical system, an investment SPTrans estimates at R$40,000 per vehicle.

For a range of 200–250 km, a battery pack has to be charged for approximately three hours. Takahira reports that scientists around the world are studying various ways of reducing recharge times and battery costs. One option being tested in Germany is the use of batteries with a shorter range but faster recharging times—taking minutes rather than hours—that can be topped up in different locations around the city, such as bus stops and terminals.

Innovation and production
The automotive industry is making a concerted effort to reduce costs and to come up with new ways to transition from diesel to electric vehicles.  Chinese automaker BYD opened a chassis factory for heavy electric vehicles in Campinas, São Paulo State, in 2017, having already sold 45 buses in the country, including the 15 to be tested by SPTrans—the others are being used in Brasília, Maringá, Volta Redonda, Campinas, Santos, and Bauru. Adalberto Maluf, BYD’s director of new business, says that the company’s research and development (R&D) center is committed to reducing chassis weight by replacing steel with aluminum. “By reducing the weight, we can increase the range of the vehicles,” he explains.

The global R&D center of Volkswagen Caminhões e Ônibus (VWCO – “Volkswagen Trucks and Buses” in English) is located in Resende, Rio de Janeiro State, where the multinational is currently developing a prototype of its first electric bus: the Volksbus e-Flex. “It will be capable of utilizing all types of electric mobility,” says Roberto Cortes, VWCO president.

The model is a hybrid with both an electric battery and an engine than can be powered by gasoline or ethanol. The batteries will be charged by external plug-in charging posts—or by an internal generator driven by the combustion engine. The generator is started automatically by an electronic system that controls the charge level of the batteries. “This model reduces the need for recharging infrastructure,” says Cortes.

Flexibility is also a concern of São Paulo company Eletra, which has already produced more than 300 trolleybuses, hybrids, and electric buses. According to commercial director Iêda Maria Oliveira, Eletra is developing two electric models in partnership with battery manufacturer Moura. One is 100% battery-powered with a range of 180 km, and the other is a hybrid, which is driven by electricity but can be fueled by battery or by a diesel generator set. “It is designed for cities that are creating zero emission zones,” says Oliveira. Upon entering a restricted area, a GPS signal shuts off the generator set, and then turns it on again after leaving. 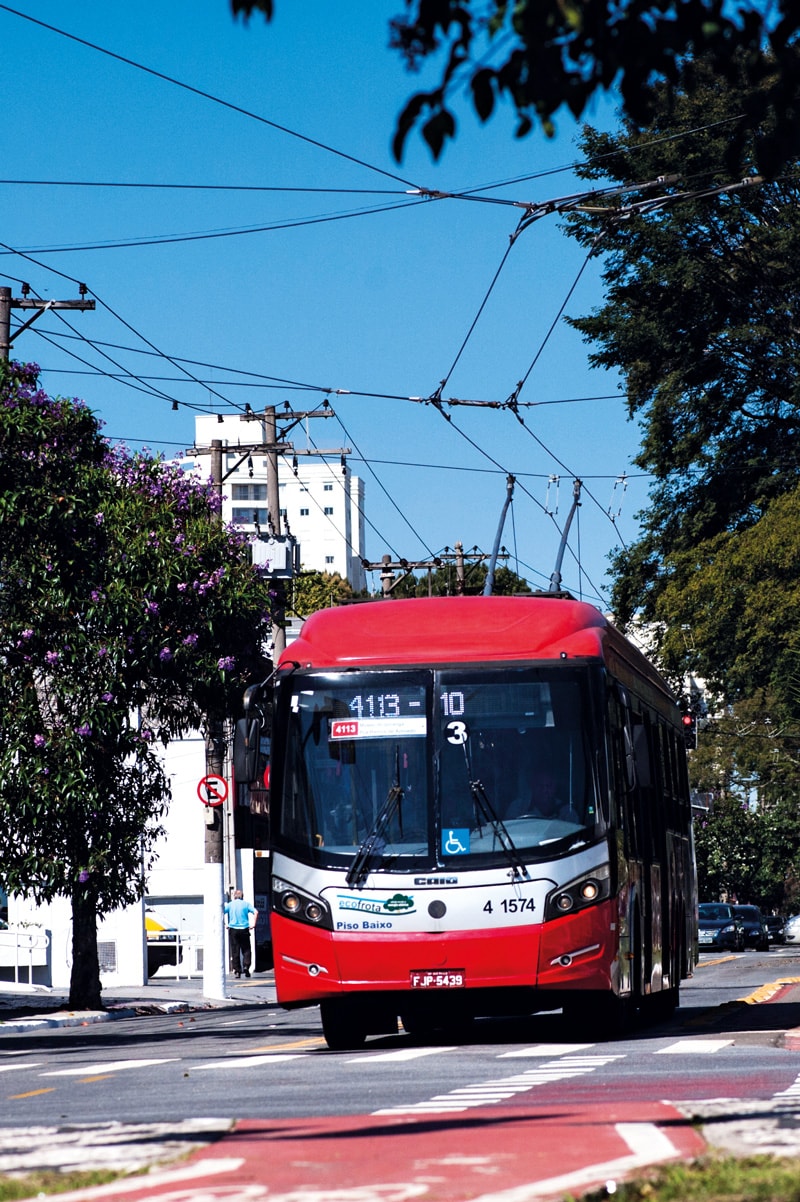 Trolleybus on the streets of São PauloLéo Ramos Chaves

Global outlook
A total of 425,000 electric buses were operating worldwide in 2018, about 17 percent of the total global bus fleet, according to Bloomberg New Energy Finance. Ninety-nine percent of them were in China, which has implemented public policies to subsidize the system as a way of improving air quality in its metropolises. The consultancy estimates that 60% of all buses worldwide will be electric by 2040. “At first, their expansion will be driven not only by economic factors, but also by environmental regulations and public policies,” says Flávia Consoni, from the Department of Scientific and Technological Policy at the University of Campinas’s Institute of Geosciences (DPCT-IG-UNICAMP).

The state government in California, USA, has ruled that from 2029, mass transit agencies will only be allowed to buy fully electric buses. Germany, England, and the Netherlands have announced similar policies. In Chile, the goal is for the entire bus fleet to be electric by 2050. Brazil, which has more than 100,000 buses operating in urban areas, only 500 of which are electric (including trolleybuses), began discussing the formulation of a national electric transport plan under the former Ministry of Development, Industry, and Commerce. “The discussions stopped when the new administration took charge,” reports Flávia Consoni, who was involved in the project.

But the country’s major cities continue to study the issue. Campinas, Curitiba, Belo Horizonte, and Brasília are all developing electric mass transit systems. The most advanced initiative is in São Paulo, but it is facing problems. The city started a public bidding process to renew its public transport contract, which is currently suspended due to legal issues. However, a municipal fleet management committee is responsible for implementing legal measures related to emissions by public transport, regardless of the contract bidding process. Electric buses are one way of complying with this legislation.

The buses used in the SPTrans pilot project were bought by public transport concessionaire Transwolff from Chinese automaker BYD, which has created a special sales system to lower the cost of the investment. The buses, which cost R$1.3 million each, were sold for R$660,000 without a battery (the same price as a diesel vehicle). BYD then imports the batteries from China and provides them on a 10-year lease at a monthly value of R$8,000 per bus, including all maintenance and replacement if necessary. For another R$2,000 a month, the company also provides recharging services. BYD is investing in its own photovoltaic energy plant to guarantee supply.

Adalberto Maluf, director of new business at BYD, explains that the average monthly fuel cost of a diesel bus in São Paulo, which travels 6,500 kilometers per month, is R$10,000. “The amount spent on diesel is more than the cost of the battery and the electricity supply,” he says.