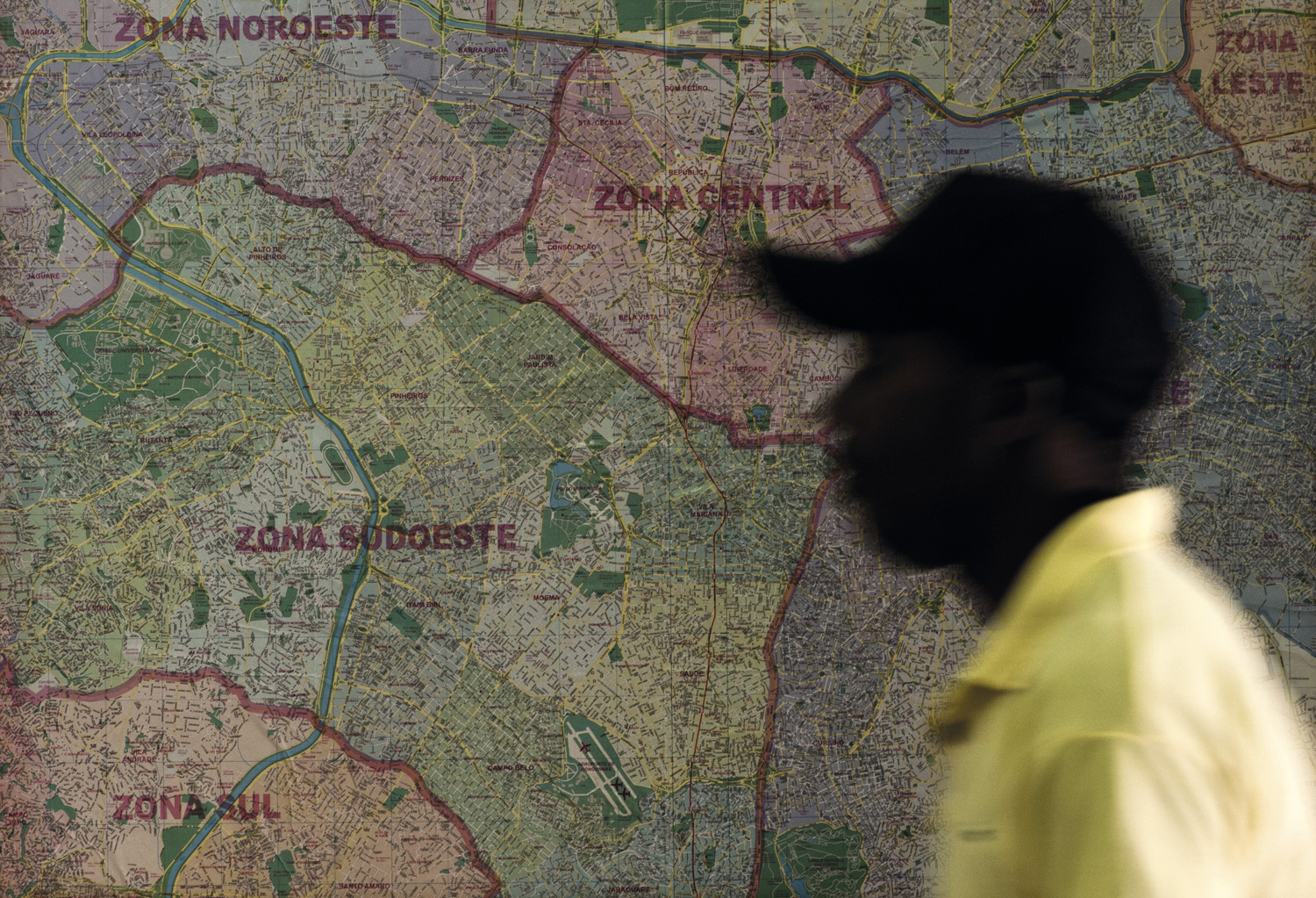 Michel Charles has been in Brazil three years, part of a group of Haitians who immigrated after the 2010 earthquake

Between 2010 and 2017, requests for asylum in Brazil rose from 966 to 33,000 per year. Although at the beginning of this decade Haitians led all nationalities in number of requests (442, or 46%), today an influx of Venezuelans makes up the majority of the petitions, with a total of 17,000 applications sent to the Brazilian government only last year. The data come from the National Committee for Refugees (CONARE) and are published in the Atlas temático do Observatório das Migrações em São Paulo – Migrações internacionais (Thematic atlas of the migration observatory in São Paulo: International migrations), developed by the Elza Berquó Center for Population Study at the University of Campinas (NEPO-UNICAMP) and released at the end of 2017. In the assessment of the researchers who drafted the document, the exponential growth can to some extent be interpreted as a result of the growing barriers immigrants face in entering European Union countries and the United States. However, it also reflects peculiarities in Brazilian immigration legislation, which makes seeking asylum the most reliable route for certain groups of foreigners to legally gain entry into the country. Adopting this strategy, however, far from secures their residency status in Brazil. The entire immigration process is marked by uncertainty.

Until the end of last year, the Foreigner Statute, defined during the military dictatorship and in effect since 1980, regulated Brazilian migratory policy according to logic based on national security. Rosana Baeninger, a NEPO researcher and professor at the Institute of Philosophy and Human Sciences (IFCH) at UNICAMP, explains that the statute established certain conditions under which foreigners could obtain permanent or temporary visas in Brazil. These conditions varied according to bilateral agreements between specific countries, but certain circumstances gave migrants the right to residency, such as marriage to Brazilian citizens, the birth of children within Brazilian territory, or offers of employment. The statute prohibited those who entered without a visa from regularizing their status after already entering the country. “Reciprocity agreements allowed them to stay for up to 90 days, as tourists. After this period, many immigrants were legally undocumented, which restricted their access to certain rights,” explains Baeninger.

For South American immigrants, the situation began to change with the 1991 establishment of Mercosur, a regional integration process in which all South American countries currently participate, except for Venezuela, which was suspended from the bloc in 2017. “Mercosur allowed citizens of member countries to request temporary residence and work in Brazil,” Baeninger observes. When the New Immigration Law went into effect last November, foreigners of certain nationalities acquired the right to regularize their status without the need to leave the country, as had previously been the case. “The new legislation seeks to facilitate the establishment of residence for groups of migrants emigrating for humanitarian reasons, or for individuals with low levels of education, something that didn’t exist in the previous law. However, since all of its resolutions are not yet defined, foreigners don’t know for sure the best way to have their presence in Brazil regularized.” She believes that both the past limitations of the Foreigner Statute, as well as the uncertainties of the new law have caused some immigrant groups to bet on seeking asylum as a way to increase their chances of remaining legally in Brazil.

Asylum is governed by the 1951 United Nations Convention Relating to the Status of Refugees. It is this document that establishes standards for the treatment of this type of immigrant, defined in different ways by the signatory countries. In Brazil, asylum is governed by Law No. 9474/97. Enacted 20 years ago, it was not directly affected by new immigration legislation. In order to have their refugee status recognized immigrants must prove they suffer from “well-founded fears of persecution on grounds of race, religion, nationality, social group, political opinion, or grave and widespread human rights violations” in their home country.

Once the application is registered, the immigrant becomes entitled to all the rights of the regularized citizen, such as temporary residence, a work permit, and medical care through the government’s Unified Health System (SUS), as well as a guarantee they won’t be deported. The process for requesting asylum is free, unlike the visa application process. The requests are judged by CONARE, an interagency institution that also includes the Federal Police, the United Nations High Commissioner for Refugees (UNHCR), and non-governmental organizations. “Requests for asylum have been taking a minimum of two years to be decided,” says Gustavo da Frota Simões, a professor of international relations and coordinator of the Sérgio Vieira de Mello Chair at the Federal University of Roraima (UFRR).

The entry process of Haitians since 2010 can help us understand how, under certain circumstances, seeking asylum can function as a strategy for entering Brazil. The Haitian immigrants arrived after the 2010 earthquake that resulted in the deaths of 316,000 people in their Caribbean homeland. The first immigrants crossed the border through the states of Acre and Amazonas. In 2010, 442 Haitians sought asylum. In 2011, there were 2,500. While awaiting adjudication, they all had the right to work permits and the right of residence. “The Brazilian government did not recognize the Haitians as refugees. However, it identified that they were immigrating for humanitarian reasons and created a visa so that they could have their status regularized in Brazil. This visa would serve those who were in Haiti with the intention of emigrating and applying from the Brazilian embassy in their country,” explains economist Duval Magalhães Fernandes, professor of the Postgraduate Program in Geography at the Pontifical Catholic University of Minas Gerais (PUC-MG). He adds, however, that initially the government limited the number it granted of these visas to 1,200 per year. “This fact led to conditions of chaos on the doorstep of the Brazilian embassy in Port-au-Prince, and further increased the numbers of immigrants arriving along the northern border who requested asylum,” recalls Fernandes. He adds that for Haitians who requested asylum and had their request denied, the government granted permanent residence visas. “At no point were the Haitians in the country under illegal conditions. So, requests for asylum became a mechanism for obtaining legal residency status in Brazil,” Fernandes notes. Between 2012 and 2014, requests for asylum by Haitians jumped from 3,300 to 16,700.

Migrant flows on the rise
A report published in February by the newspaper O Globo, based on information from the Federal Police, showed that during one 45-day period, 18,000 Venezuelans requested asylum. This was more than the total number recorded over the entire year of 2017. It is currently estimated that between 40,000 and 60,000 Venezuelans live in the capital city of Boa Vista, a municipality with 350,000 inhabitants in the state of Roraima, which borders Venezuela. Not all of the Venezuelan migrants, however, want to settle in Brazil. “Some people try to remain close to the border, so they can visit and take money, food, and medicine to family members who stayed in their home country, and others plan to return to Venezuela,” says João Carlos Jarochinski Silva, a professor of international relations at UFRR. He observes that until 2015, Venezuelans customarily went to Boa Vista and Pacaraima to buy food, and would then return home. In 2016 more people began choosing to remain in one of these cities, which, according to the researcher, increased the number of requests for asylum.

Despite being part of Mercosur until 2017, Venezuela had never adapted its legislation to integrate with the simplified visa system. “The suspension of Venezuela from the bloc did not affect the way the entry permission policy for Venezuelans was developed in Brazil. In March of 2017, the National Immigration Council (CNIg) issued Normative Resolution No. 126, authorizing the temporary residence of migrants from bordering countries, a measure that benefited Venezuelan asylum seekers,” he observes. He adds that the procedures for applying for a residence permit became free of charge due to a judicial decision three months after the resolution was published. Even so, requests for asylum continued to be the path chosen by most Venezuelans who were unaware of the resolution, but did know that presenting documents was not mandatory. “People can file the request for asylum wearing only the clothes on their backs,” Jarochinski says. The Brazilian government has not recognized Venezuelans as refugees and has only granted 14 of the 3,300 requests made in 2016. “Many Venezuelans immigrate to Brazil to escape hunger, inflation, and violence, however, others leave their home country because they suffer political persecution, which does guarantee the recognition of refugee status. The government must analyze each case individually before granting the request,” he explains. The stream of requests for asylum by Venezuelans increased only recently, and most of the applications have not yet been adjudicated.

While the Venezuelan immigration can be seen as a result of an ongoing crisis within a country bordering Brazil, the arrival of recent migrant flows of Syrians and Haitians is related to Brazilian political policies regarding these more distant nations. Rosana Baeninger points out that Brazil’s role in the United Nations Stabilization Mission in Haiti, begun in 2014 after the fall of then-President Jean Bertrand Aristide, explains, at least in part, the interest Haitians have in trying out life in Brazil. As regards the Syrian refugees, in 2013 CONARE published a normative resolution simplifying the issuing of visas and the process for requesting asylum. Requests for asylum had already been arriving from both the Syrians themselves, and other foreigners affected by the civil war since it began in 2011. According to the Migration Observatory’s atlas, of the 391 requests sent by Syrians in 2016, 326 were accepted. Although it does not grant full citizenship, by recognizing the request for asylum the Brazilian government confirms that in addition to the rights granted to typical immigrants, asylum seekers receive certain special rights, such as the guarantee they won’t be forcibly returned to their home country, and the issuance of a passport.

Luís Renato Vedovato, a professor at the School of Applied Sciences at UNICAMP, believes that the establishment of this resolution happened at a time when the Brazilian government wanted to increase its political presence in the Middle East. “Brazil was seeking a permanent seat on the United Nations Security Council, so part of its openness to receiving Syrians was due to interest in this new positioning strategy, as well as its desire to strengthen ties with other countries of the Global South,” he says. Despite the openness policy, Brazil currently harbors few Syrian refugees. There are about 2,200 people, a small community when compared to those comprised of the millions of Syrians currently living in Turkey and Jordan, observes Igor José de Renó Machado, a professor at the Federal University of São Carlos (UFSCAR), and coordinator of the Migration Anthropology research group. Recent migrant flows of Syrians, Haitians and Venezuelans, as well as those arriving from other Latin American and African countries, Baeninger points out, are evidence of an intensification of the South-South migration movement, at a time when the countries of the Global North have begun to impose progressively more barriers to the entry of foreigners.

In 2016, refugees and asylum seekers totaled 25.9 million people worldwide, according to the International Migration Report 2017, recently published by the United Nations. With the signing of the New York Declaration for Refugees and Migrants in 2016, UN member states committed themselves to developing public policies to accommodate these displaced populations. The UN is expected to approve the Global Compact for Safe, Orderly and Regular Migration during its Intergovernmental Conference scheduled to take place in December 2018, in Morocco.