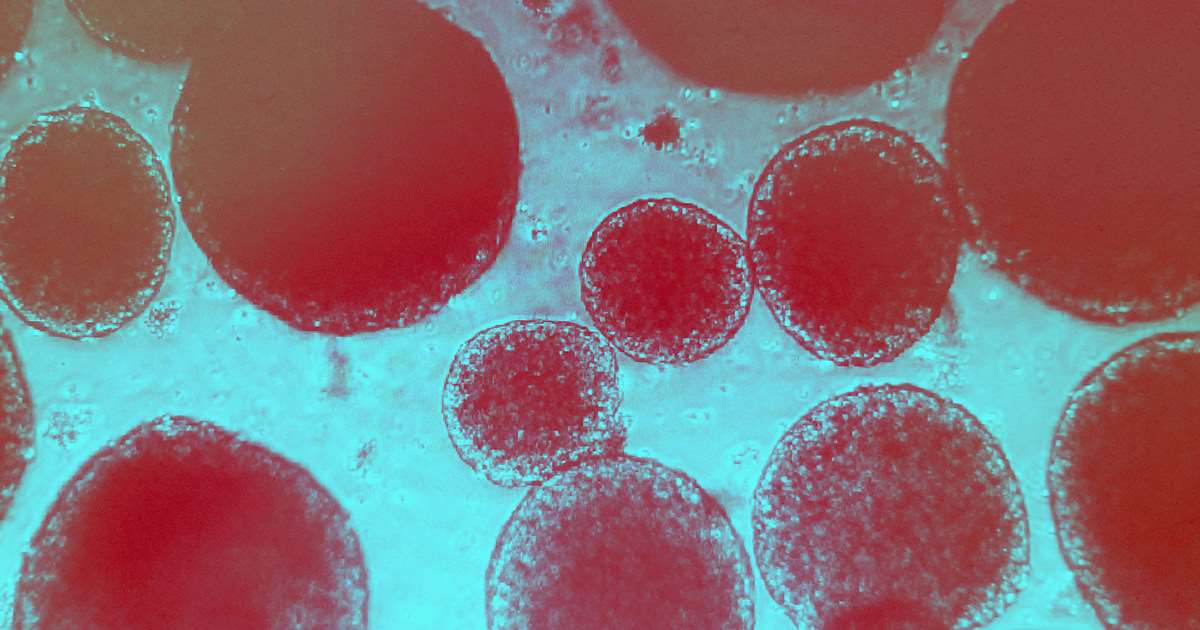 So-called mini-brains are organoids made up of different types of brain cells. In this image, they are visible to the naked eye (bottom) and seen under a microscope (top)

A group of researchers at the University of Campinas (UNICAMP) and the University of California–San Diego (UCSD) has developed a new technique for growing brain-like organoids that mimic the cerebral cortex. These organoids, less formally known as “mini-brains,” are now being used to simulate and observe the onset of a drug-unresponsive form of epilepsy caused by focal cortical dysplasia, a malformation in the brain. One of the effects from these malformations is the presence of dysmorphic neurons, which are larger and have more connections than normal neurons and emit abnormal electrical signals. This causes the onset of epilepsy, a chronic disease characterized by recurrent seizures. Around 30% of people with epilepsy have a form of the disease that is unresponsive to drug or surgical treatment.

To aid their research, the researchers developed mature mini-brains that allowed them to observe the development of the cerebral cortex and the formation of different neural cells—such as glial cells, which provide protection and support to neurons, and dysmorphic neurons. The organoids were “aged” over a period of 90–150 days before being used in the experiments, one of the main differentiators of the new method. In these simulations, the researchers were able to observe the formation of electrical activity in a process that closely emulates the patterns in a fetus’s brain during its first trimester. They reported their findings in a paper in the journal Brain.

Focal cortical dysplasia is a brain malformation that occurs during pregnancy. The onset of epilepsy can occur at different stages in life and not necessarily during childhood. Newborns’ brains are not sufficiently developed to have epileptic seizures. “But a person with dysplasia is very likely to develop epilepsy at some point in life,” says Iscia Lopes-Cendes, a geneticist at UNICAMP’s School of Medical Sciences (FCM), who led the team that produced the mini-brains alongside Brazilian neuroscientist Alysson Muotri at UCSD. Lopes-Cendes’s research is part of a broader program at the Brazilian Institute of Neuroscience and Neurotechnology (BRAINN), a Research, Innovation, and Dissemination Center (RIDC) funded by FAPESP.

“A person with severe epilepsy caused by focal cortical dysplasia has between 40 and 50 epileptic seizures a day. This prevents children from going to school and adults from living a normal life,” says neuroscientist Simoni Avansini, the lead author of the article—Avansini has done postdoctoral research on the cultivation of brain organoids at UNICAMP and UCSD, and is currently working at the Brazilian Center for Research in Energy and Materials (CNPEM).

A healthy cerebral cortex is organized into six layers. The cells of each segment work in an orderly and connected fashion. In a brain with dysplasia, the cortex layers are not as well differentiated. There are some abnormal cells, dysmorphic neurons, and balloon cells. Dysmorphic neurons are likely to be the primary cause of epileptic seizures because they result in abnormal electrical discharges.

Despite their name, so-called mini-brains do not look at all like miniature brains. Instead, they are pinhead-sized clumps of brain cells that can, in theory, behave in general like brain tissues. A number of different diseases and clinical conditions, such as schizophrenia, have been simulated using these types of organoids. Mini-brains have also been used to model how the Zika virus affects the nervous system, but in this case they are not required to be “aged” to the same degree; after a week of cultivation in the laboratory, they are ready for use.

To create the mini-brains, the team reprogrammed adult stem cells taken from the skin of four patients with epilepsy caused by focal cortical dysplasia, who had been admitted for surgery at UNICAMP’s teaching hospital. The cells were transformed into induced pluripotent stem cells (iPSC)—cells that are capable of differentiating into all specialized cell types. “Next, we differentiated the iPSCs into neural cells, and cultured them under agitation to obtain mini-brains,” explains Lopes-Cendes. To create a control group, the same process was repeated with cells from healthy people of the same sex and a similar age to the dysplasia patients. The goal in comparing the two groups was to develop a human model that could be used to study the pathophysiology of focal cortical dysplasia.

José Eduardo Peixoto-Santos, a neuroscientist at the São Paulo School of Medicine of the Federal University of São Paulo (EPM-UNIFESP), believes the research is a breakthrough that can open up new avenues for research on cortical dysplasia and epilepsy in general. The researchers used a sophisticated approach to stimulate electric current in the mini-brains, without the use of microelectrodes. “They applied light to produce electrical stimuli in the mini-brains. The electric current thus produced more closely mimics electrical activity in the human brain,” says Peixoto-Santos, who was not involved in the study. “Few researchers have mastered this technique.”

Data from the World Health Organization (WHO) indicates that around 50 million people worldwide suffer from epilepsy. Nearly 80% of people with epilepsy live in low- and middle-income countries, often without access to treatment. A better understanding of how dysmorphic neurons form in a brain with focal cortical dysplasia—and the path followed by electrical signals during an epileptic seizure—could provide new insight into the causes of the disease and perhaps lead to more targeted treatments for all types of epilepsy.