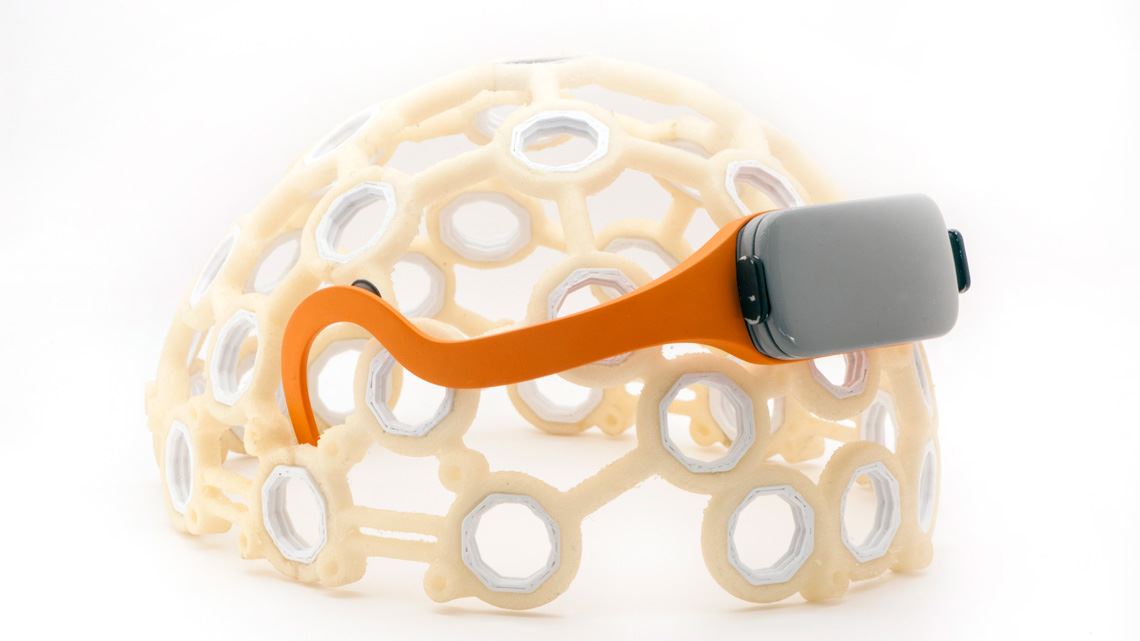 In efforts to minimize suffering for people with epilepsy, a startup in São Paulo has developed a portable device to battle one of the disease’s main characteristics: its unpredictability. The noninvasive wearable device, designed to detect and warn people of epileptic seizures up to 25 minutes before they occur, will begin tests at the Hospital de Clínicas teaching hospital of the University of Campinas (UNICAMP) later this year. Epilepsy is an incurable neurological disease that affects some 50 million people worldwide. It is estimated that more than 2 million Brazilians suffer from the disease.

The innovative new product was created by Epistemic, a company founded in 2015 and based at the Center for Innovation, Entrepreneurship, and Technology (CIETEC) of the University of São Paulo (USP). Named Aurora, the prototype is now in its fourth iteration. The device looks something like a hairband or a pair of headphones and contains a mini electroencephalogram (EEG) electrode that records the electrical activity of the brain. The electrode is connected to a computer program that processes the brain wave data and sends an alert to the wearer’s smartphone—and to the phone of a friend of relative—if the algorithm detects that a seizure is about to occur. Aurora was developed with funding from the FAPESP Research for Innovation in Small Businesses (RISB, or PIPE in the Portuguese acronym) program.

“It’s just like a traditional electroencephalogram device, but smaller. It fits in the palm of your hand,” says electrical engineer Paula Gomez, who founded the company in 2015 with her mother, theoretical physicist Hilda Cerdeira, an expert in chaos theory and nonlinear systems, and engineers Conrado Leite de Vitor and Giuliano Leite de Vitor. The idea is for patients to wear the device at all times, taking measures to protect themselves when they receive a warning, either by taking their prescribed medication or going to a safe place. This could give people a better quality of life, with fewer limitations and greater autonomy, according to the team behind the technology.

One of the major challenges faced by scientists studying epilepsy is finding patterns in the brain’s unpredictable electrical activity or other signals that suggest a person is about to have a seizure. These events can manifest in different ways, including rhythmic and repetitive convulsions and brief losses of consciousness with memory lapses.

It is these patterns that physicist Hilda Cerdeira says she has identified after poring over international databases of information on people who have undergone surgery to treat their epilepsy. As a result of her investigations, she claims to have detected a specific brain pattern that occurs 25 minutes before a seizure.

Born in Argentina but living in Brazil, Cerdeira had already retired from UNICAMP and the Abdus Salam International Centre for Theoretical Physics in Trieste, Italy, when she began researching the brain signals of epilepsy using a methodology she had previously developed to decode chaotic signals in nonlinear systems. Her interest in the subject arose after giving a lecture at Hospital Sírio-Libanês in São Paulo in 2008, when she became aware of the disordered patterns of encephalograms.

Trial by fire
Epistemic’s research, says Gomez, is in line with studies being conducted by the most advanced groups in the world. “I’m not aware of the existence of any device like ours on the market,” she emphasizes. The real acid test will be the trials scheduled to take place at UNICAMP in partnership with the Brazilian Institute of Neurosciences and Neurotechnology (BRAINN), one of the Research, Innovation, and Dissemination Centers (RIDCs) funded by FAPESP. During the 18-month study, the researchers will test whether the pattern identified by Cerdeira can really indicate imminent epileptic seizures in human volunteers. 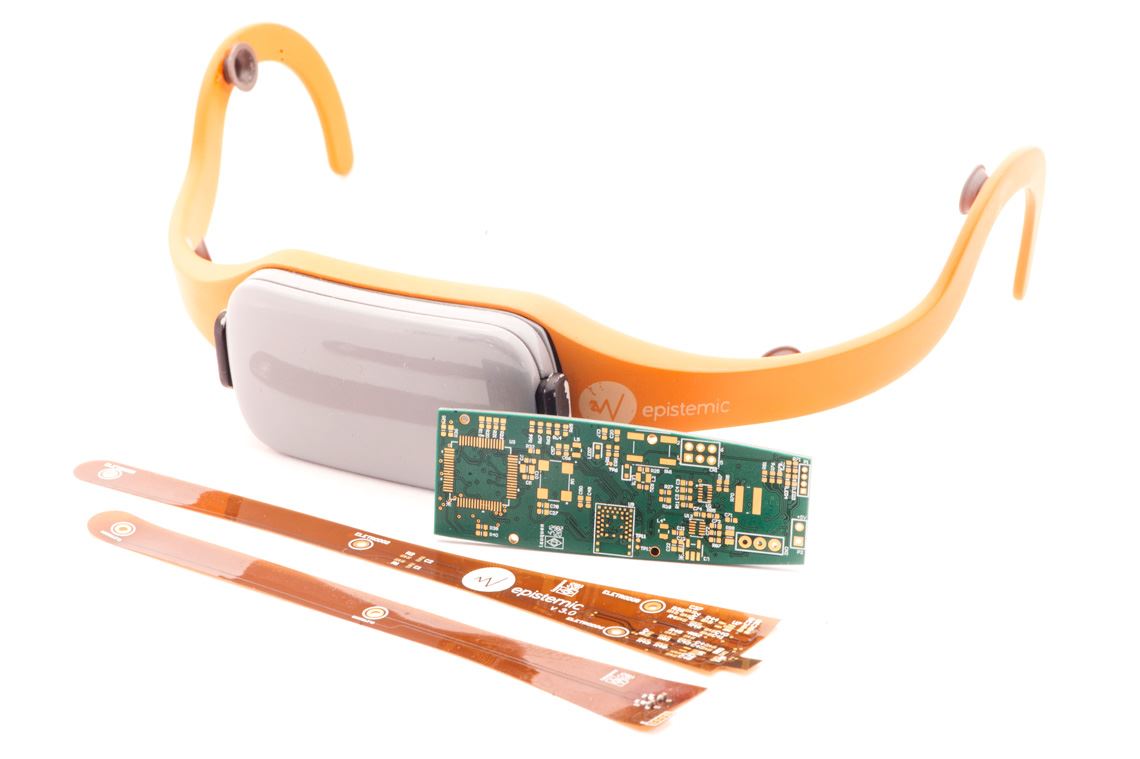 Gomez explains that usually, people planning to undergo surgery to control the disease are observed in hospital, where EEG outputs are recorded to help doctors locate the brain area responsible for the seizures. Recommended for the 30% of patients whose epilepsy is resistant to antiepileptic drugs, surgical treatment comprises removing the area of the brain that causes the seizures or interrupting the line of communication between the brain structures involved. Before the surgery, patients are monitored by EEG 24 hours a day while reducing their medication to increase the chance that seizures will occur. Cerdeira used data from approximately 200 recorded epileptic seizures in 50 patients to identify a pattern in the so-called pre-ictal phase, a medical term meaning before the seizure.

“Now, during the clinical trials of our device, we’re going to see a practical difference for two reasons. Firstly, because patients will not have to reduce their medication. Secondly, because the volunteers will be moving around, performing their normal activities rather than lying in a hospital bed,” says the electrical engineer. As a result, the test will better reflect the day-to-day conditions of the users of the device.

In addition to the seizure prediction algorithm, Epistemic also developed the system’s electronics and mechanics. The technological innovations it uses include dry electrodes and a flexible, malleable plate that houses the processing system and molds itself to the shape of the patient’s head. The novelty of the electrodes is that unlike those used in conventional EEG devices, they work without the need for a conductive adhesive. Aurora is equipped with four electrodes that make contact with the scalp. One on each side of the band capture electrical signals from the brain, while the other two are used to check that the others are well positioned and functioning correctly.

Neurologist Carlos Eduardo Soares Silvado, from the Federal University of Paraná (UFPR), believes that Aurora’s biggest challenge will be detecting seizures 25 minutes in advance. “They come on very quickly, often in a matter of seconds,” he says. “If Aurora works, it will be fantastic. It will be of great benefit to people with epilepsy.” He points out, however, that there are cases where hospital electroencephalograms are unable to find the origin of the attacks, depending on the location in the cerebral cortex. “Maybe the device will need more electrodes or a more sophisticated algorithm. But the research is very promising.”

Neurologist Fernando Cendes, a researcher at BRAINN and professor at the UNICAMP’s School of Medical Sciences, believes the idea that Epistemic’s device will be able to detect an epileptic seizure almost half an hour in advance is “highly optimistic.” He notes, however, that the development offers a way of continuously and noninvasively monitoring electrical brain activity, which could have many applications. “Even if it can only detect an episode five seconds earlier, it will be important. Advances like this are how science progresses.”

According to Cendes, the UNICAMP trial, in which his group will be involved, is only an initial phase. “If this first proof of concept works, tests should be done with a larger number of people.” The scientist says it is difficult to predict when the device will be available to patients. To reach the market, it not only has to prove itself viable in clinical trials—it will also need to be approved by the Brazilian Health Regulatory Agency (ANVISA).

Epistemic has already earned recognition for its work. Last year, the startup was selected to participate in Samsung’s Creative Startups acceleration program, receiving R$200,000 to invest in research. In 2018, Gomez was awarded the Cartier Women’s Initiative Award, which celebrates the achievements of female entrepreneurs.

With the funding from Samsung, the startup created a diary application called the Epistemic App, on which patients record data related to their diet, sleep, physical activity, and more. It was launched last year, alongside Epistemic Web, where information from the app is displayed in graphs and reports for physicians. “The Epistemic App can be used to record data related to seizures and highlight potential triggers,” explains Gomez. Available on Google Play, the application has been downloaded 4,500 times and has 1,100 active users.

Research to help epilepsy patients live with the disease has advanced in recent years. Several innovations with different aims have already reached the market, including devices that detect the moment a seizure occurs and issues alerts. At these moments, changes in the brain are more easily detectable. “During a seizure, there is an abrupt change in the brain’s electrical activity,” says Cendes. “A large group of neurons begin firing very suddenly and for a sustained period of time, which is not normal. They fire more rhythmically and are stronger than usual.”

The UNICAMP neurologist explains that the clinical manifestations of an epileptic episode depend on where it occurs in the brain and whether the abnormal neuron firing is generalized or restricted to one location (focal seizures). “These manifestations are highly varied. They can cause increased movement, for example, such as muscle twitches or jerks, or sudden pauses, during which the person looks lost and appears unresponsive for a few seconds. In the case of the latter, patients and the people around them often don’t even notice that an attack has occurred.” First-hand reports of symptoms therefore do not always accurately reflect the true frequency and duration of seizures.

A review article published in the scientific journal Acta Neurologica Belgica in 2020 compared 16 different wearable technologies designed to detect epileptic seizures. Of the noninvasive devices, most work by identifying motor changes common during an episode. These changes are detected using instruments called actimetry sensors. Common in smartphones and smartwatches, actimetry sensors can tell whether the user is walking, running, or at rest. Many also include skin temperature and heart rate sensors.

Approved by the US Food and Drug Administration in 2018, the Embrace wristband made by Italian-American company Empatica has an activity biosensor that detects convulsive episodes—characterized by muscle twitches—and sends a cell phone alert via Bluetooth to a friend or relative of the patient.

Another category is invasive devices—used in more severe cases, when the patient is resistant to drugs and their seizures are strong and frequent—with electrodes on a silicone plate implanted inside or on the surface of the patient’s brain.

In Melbourne, Australia, the Bionics Institute is working on an implantable device for recording seizures. As soon as it detects electrical changes in the brain, it administers antiseizure medication directly to the patient. California-based startup NeuroPace has developed an electrostimulation device called RNS, which is implanted in the brain of patients with drug-resistant epilepsy. The system sends brief pulses of electrical stimulation to the brain when needed, as determined by the user’s physician.

Cendes believes wearable devices have certain advantages over invasive technologies. “Noninvasive approaches are much more practical,” he points out. “They remove the need for surgery, meaning there is no risk of infection or other complications. The cost is much lower too.”