A laboratory-scale model of the UAV

If things go as planned, within the next two years the Brazilian Air Force (FAB) will begin flight trials of the first hypersonic engine developed in Brazil. The tests are part of a broader program to develop capabilities to build hypersonic vehicles—vehicles capable of flight at five times the speed of sound, or Mach 5. Mach is a unit of speed corresponding to approximately 1,200 kilometers per hour (km/h). The program is being developed by the Institute for Advanced Studies (IEAv), a research center in the FAB’s Department of Aerospace Science and Technology (DCTA), in partnership with Orbital Engenharia. Both are based in São José dos Campos, São Paulo State.

In addition to a hypersonic engine, the 14-X Hypersonic Propulsion (PropHiper) program, initiated in 2006, is building an unmanned aerial vehicle (UAV) to which the engine will be coupled. Christened 14-X in tribute to the 14-Bis—Brazil’s first powered aircraft—the UAV will employ an experimental design termed “waverider” for its ability to use shock waves generated beneath the vehicle at high speeds to produce lift. The vehicle will “ride,” as it were, the waves created in flight.

“There are currently no hypersonic aircraft in routine operation anywhere in the world. This technology is the state of the art even for countries such as the US, Russia, and China,” says colonel Lester de Abreu Faria, an electronic engineer and director at IEAv. “Many countries have similar programs and although ours has taken long to develop, we are not far behind the frontrunners.”

According to program manager Israel Rêgo, the scramjet (supersonic combustion ramjet) engine being developed will also be used as a second- or third-stage propulsion system for rockets, which have multiple stages (or engines) that are fired successively during flight. For its first flight test, scheduled for 2020, the scramjet engine will be coupled to a sounding rocket developed by the Aerospace Institute (IAE), a DCTA unit dedicated to developing aerospace technology, in a program that received funding from FAPESP.

Hypersonic aerial vehicles fitted with the scramjet engine can be used either as passenger aircraft or for military applications. In 2018, Russia and China successfully tested their Avangard and Xingkong-2 hypersonic missiles. In the US, Lockheed Martin is building a hypersonic vehicle capable of flight speeds up to Mach 6. 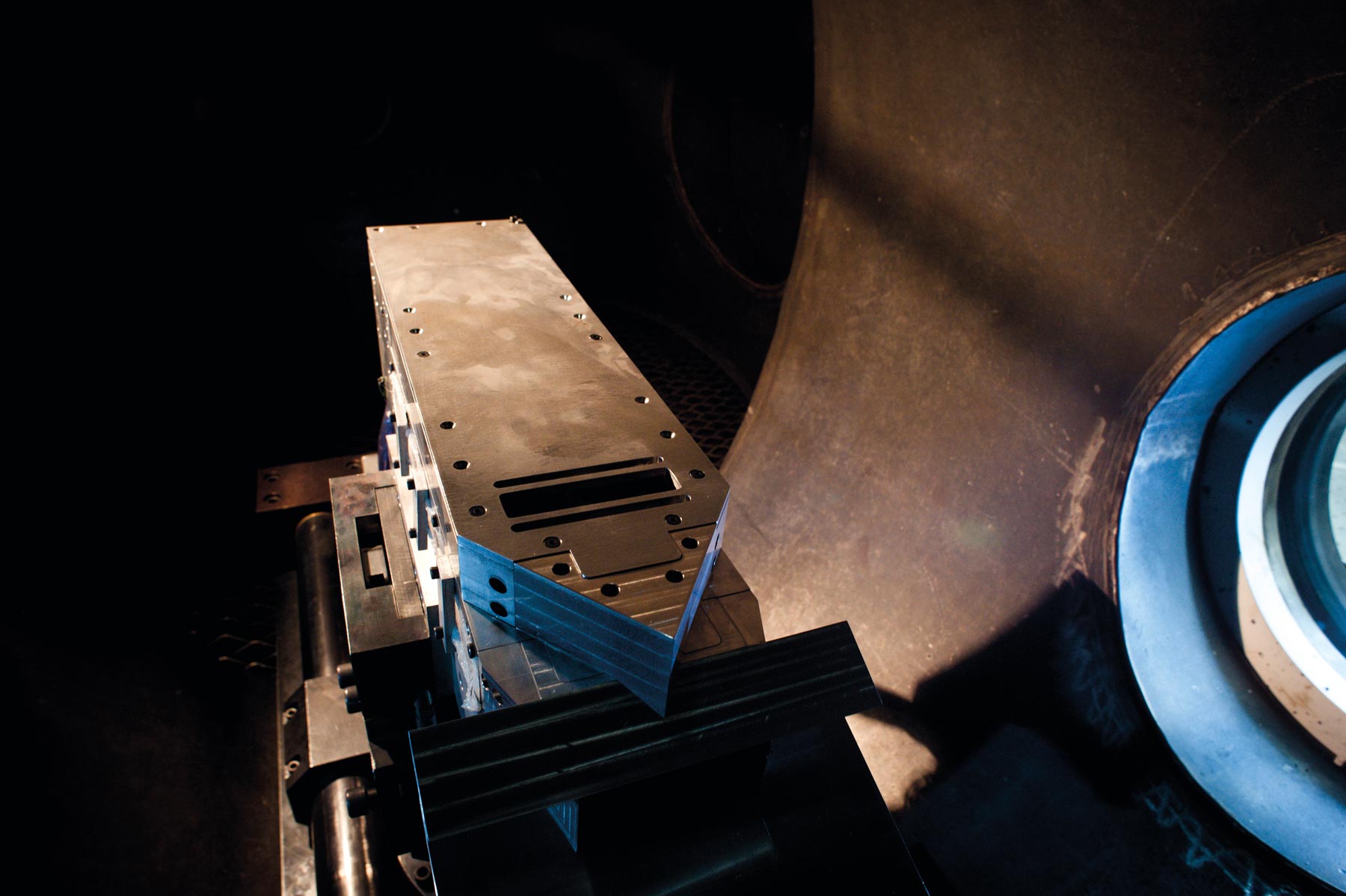 The scramjet engine during a wind tunnel testLéo Ramos Chaves

Since program inception, more than R$53 million has been invested in 14-X, which is designed to operate at Mach 10 (12,000 km/h). “Half of the program was spent training staff and building laboratory infrastructure, including the T3 hypersonic shock tunnel for aerodynamic testing,” says Rêgo. “The next major step will be to take our waverider and engine design out of the lab and into real-world flight.”

There are a number of hurdles, however, that first need to be overcome. The first is completing the scramjet engine itself. Like commercial jet engines, scramjet engines breathe air from the atmosphere to burn fuel; but unlike regular engines, they have no moving parts. “In supersonic combustion, intake air needs to be decelerated, pressurized, and heated before entering the combustion chamber, where fuel is injected. This requires a precisely designed engine geometry,” says Rêgo. 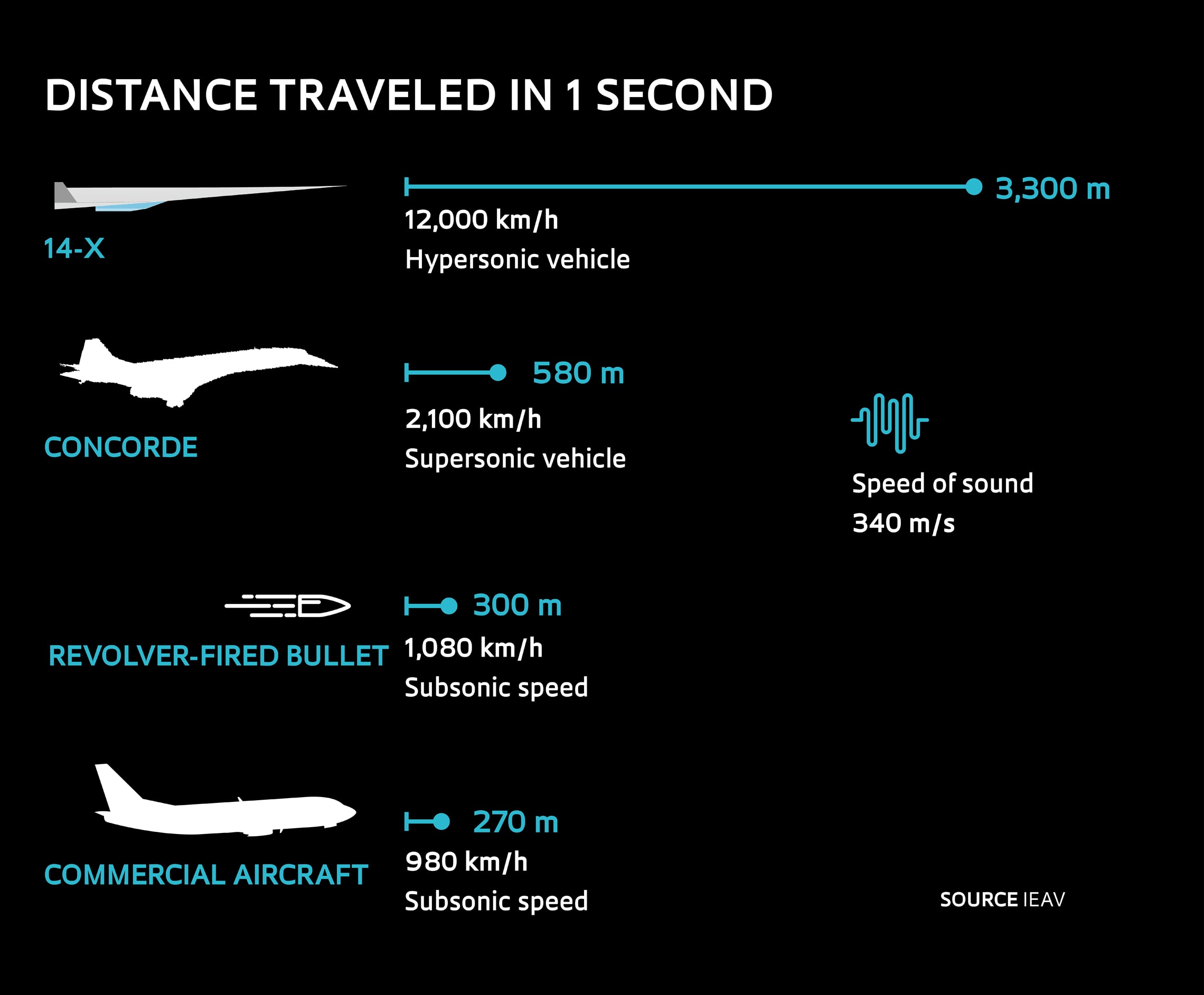 Another challenge in the program is building the vehicle to withstand the friction generated in flight at hypersonic speeds. “The parts most exposed to heat from air friction need to be made of materials that can endure the high temperatures, while the colder parts will be made of steel and aerospace aluminum,” explains Colonel Marco Antônio Sala Minucci, an aerospace engineer and hypersonics consultant with the 14-X program.

Lastly, there has to be a perfect fit between the engine and the hypersonic vehicle due to the very high drag force (force contrary to the direction of motion) encountered in hypersonic flight. “The front of the vehicle needs to function as an air intake [to the engine] where air is compressed, while the rear end needs to operate like a nozzle, converting the high temperature and pressure in the supersonic combustion chamber into thrust. The engine and vehicle are made into a streamlined whole, capable of achieving very high flight speeds,” explains Israel Rêgo.