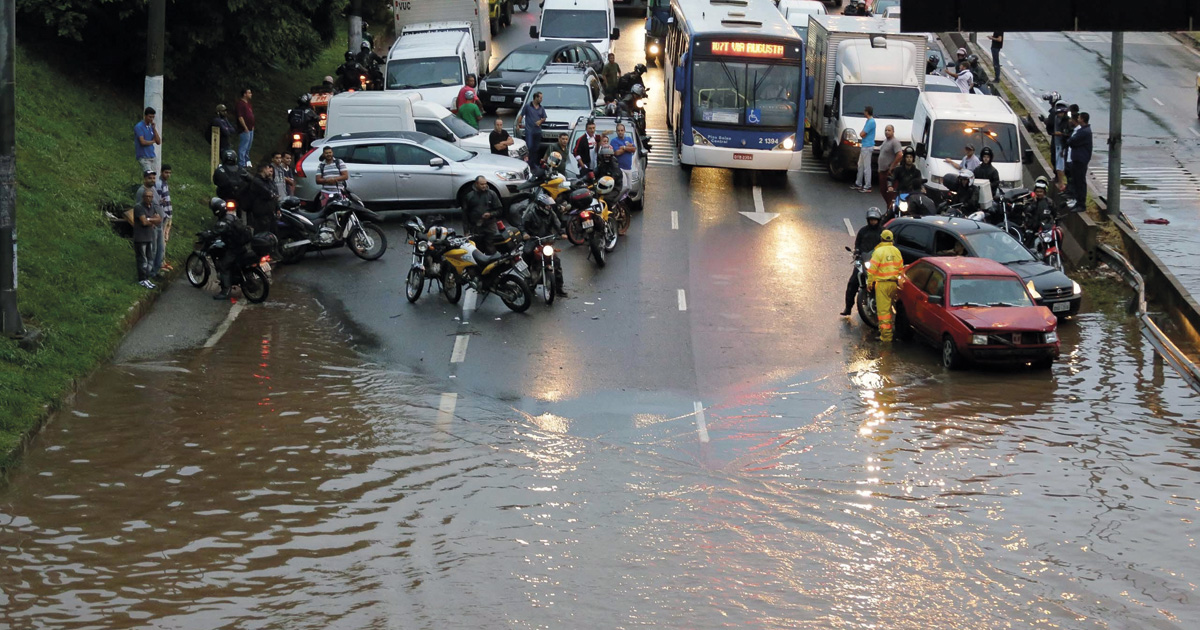 Flooding of the river Tietê leads to traffic chaos

The situation repeats itself every summer. Heavy rainfall at this time of the year raises river levels and causes floods, putting at risk the homes and lives of those who live near the river banks. During the last rainy season, from November 2016 to April 2017, there were 55 floods recorded in São Paulo—an average of one every three days, according to the city’s Emergency Management Center (CGE). São Paulo is not the only city facing such a problem. Belo Horizonte, Recife, Campinas, and many other Brazilian cities also suffer from regular floods.

To address the problem, civil defense and water management agencies such as the National Water Agency (ANA) use a set of tools to monitor the level and flow of rivers and to warn the population of flood risks, including meteorological radars, satellite images, rain gauges, numerical rainfall forecasting models, and data collection platforms. Hoping to contribute to this prevention and warning system, researchers from the University of São Paulo (USP) created e-Noé, a wireless sensor network for flood monitoring in urban rivers.

The device, already operational, uses a set of submerged sensors located at several points along a river. Connected via a wireless network, these sensors detect changes in the height of the water column, while at the same time, cameras record the water level by photographing the river banks. The information and images from the sensors are sent by cell phone signal to the cloud, where they are accessed by local civil defense agencies (see infographic).

“Unlike conventional hydrometry, where data can only be collected by physically going to the station to retrieve it, a wireless sensor network like ours transmits the information in real time. The system can automatically issue flood alerts,” says project coordinator Jó Ueyama, from the Institute of Mathematics and Computer Science at USP São Carlos. “Unlike similar models imported from abroad, ours also uses artificial intelligence, such as neural networks, to predict floods, and allows the addition of pollution sensors, which can be of great value in water quality monitoring.”

According to Ueyama, the e-Noé system has already been tested with good results in the Monjolinho and Tijuco Preto rivers in São Carlos—which often overflow—and is continously improving. “We are investing in solar energy and high-capacity batteries as a reliable power supply for the system. We are in contact with the Eldorado Institute in Campinas, which has shown an interest in making these adaptations and marketing the device,” he says. The complete system, including pressure sensor, camera, information processing software, wireless network, and 4G modem, is expected to cost R$15,000, Ueyama estimates. “A sensor has to be installed at each point where there is a risk of flooding,” says the researcher, who adds that potential customers include the ANA and other municipal or state agencies responsible for water resource management and urban river monitoring.

There are no similar commercial devices manufactured in Brazil, only those made abroad and imported. “The imported systems are off-the-shelf and ready to use. There is no easy way to reprogram the sensors, whereas e-Noé can be easily adjusted,” says Ueyama. He explains that the riverbanks where the sensors are installed have specific characteristics, details of which should be programmed into the devices to improve forecasting and detection. “E-Noé integrates monitoring and decision-making into the model,” says Ueyama.

The São Paulo Flood Warning System (SAISP), which monitors rainfall and rivers across Greater São Paulo, uses a system similar to e-Noé, designed by the agency itself. “The hardware was developed for our own use. It is not for sale, but we are marketing flood monitoring, forecasting, and warning services,” explains electrical engineer and SAISP coordinator Flavio Conde. “Just like our technology, the USP system could be interesting for flood detection because it is so easy to install.”

For Eurides de Oliveira, deputy manager of the ANA Hydrometeorological Network, technologies such as e-Noé and SAISP’s device show good potential for use in Brazil. “Low cost, simple warning models are ideal for urban regions that need a rapid response to events such as floods,” he says. The fluviometric stations used by the ANA to measure the level and flow of watercourses are mostly dedicated to monitoring rivers in drainage basins outside urban areas, he explains. “We use imported data collection platforms that send information to control centers via satellite.” These devices cost about R$50,000.

Image detection
One way that e-Noé differs from similar devices utilized in Brazil is that it uses images to automatically detect and predict floods without human intervention. The software compares pictures taken by the system cameras with stored images of the river at its normal level. The prototype is also innovative in its use of the Internet of Things (IoT) model. “As well as being available to the authorities, the data provided by the sensors can be accessed by any user connected to the internet. The public can receive flood warnings directly on their cell phone,” says Ueyama.

Extensive use of river monitoring systems, coupled with other current technologies such as rain gauge networks, meteorological stations, radars, and satellites, can help strengthen flood warning services in Brazil, says water resources engineer Eduardo Mario Mendiondo, former research coordinator at the Natural Disaster Monitoring and Warning Center (CEMADEN). “There are almost 40,000 areas in Brazil where the local population is at risk of flooding and landslides. Less than 3% of them are covered by traditional monitoring,” says Mendiondo, a professor at the USP São Carlos School of Engineering (EESC-USP) who worked with Ueyama on the development of the e-Noé system.