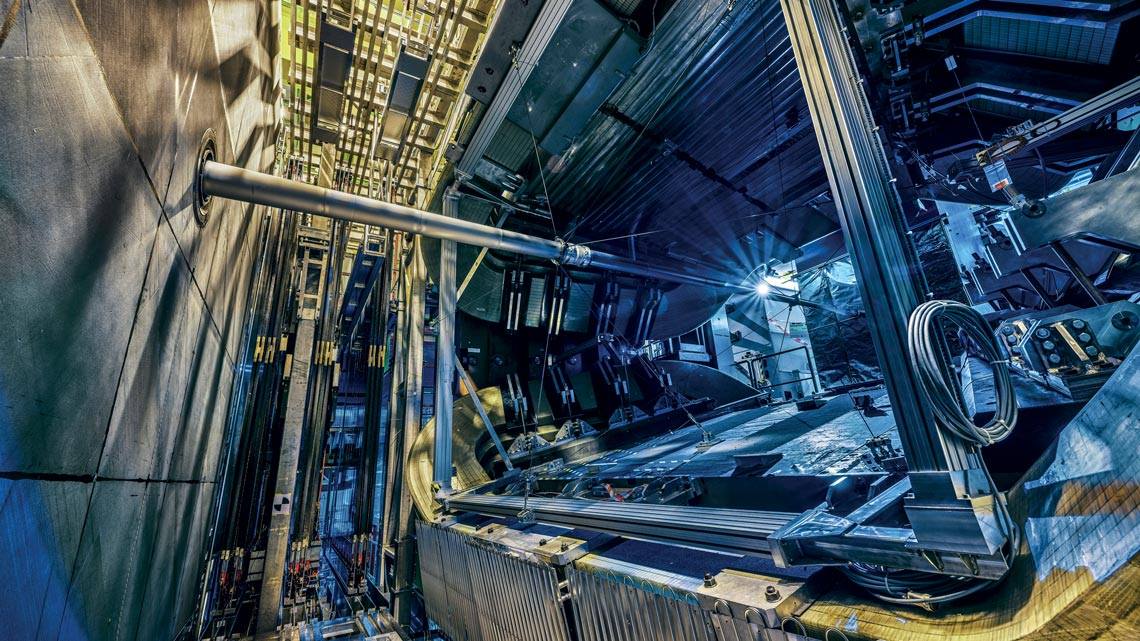 One of the great mysteries of cosmology is the matter–antimatter asymmetry that has been present since the Big Bang, the initial explosion thought to have given rise to the Universe about 13.8 billion years ago. This imbalance is characterized by a higher number of particles, such as protons, neutrons, and electrons, than of their corresponding antiparticles (antiprotons, antineutrons, and positrons). An antiparticle’s mass, energy, and other properties are identical to those of its respective particle, but its charge and some quantum parameters are reversed. The electron, for example, is a negatively charged particle. The positron, its antiparticle, is positively charged. In theory, the same amount of matter and antimatter—which are created simultaneously like identical twins—should exist in the cosmos. But almost everything we observe in the visible Universe, from atoms to galaxies, consists of particles and not antiparticles.

One approach to solving the matter-antimatter asymmetry problem is by analyzing how the production of certain types of subatomic particles and antiparticles violates a fundamental law of physics known as charge-parity (CP) symmetry. This principle predicts that the rate of decay of a particle and its respective antiparticle should be the same. Decay is a spontaneous process in which unstable particles and antiparticles break down to produce other, lighter particles and antiparticles. A study led by a group of Brazilian researchers at the world’s largest particle accelerator, the Large Hadron Collider (LHC), has recorded the highest degree of CP symmetry violation ever measured in the lab. LHC is one of the laboratories at the European Organization for Nuclear Research (CERN), a facility astride the Franco-Swiss border near Geneva—in early March the Brazilian Federal Government signed an agreement to join the institution as an associate member (see box).

According to the study, rare forms of short-lived subatomic particles, known as B-mesons, decay at an almost seven times higher frequency than their respective antiparticles. “If the degree of CP-symmetry violation was around 10% our results could be easily explained by current physics. But the level of asymmetry we measured was unexpected,” said Ignácio Bediaga, a physicist at the Brazilian Center for Physics Research (CBPF) who led the study team, in an interview with Pesquisa FAPESP. “Such a pronounced violation could be due to quantum interference or some physical mechanism that we don’t yet know about.”

The discovery, which has yet to be reported in a scientific journal, was made by a team of 12 Brazilian and 1 Honduran physicist, all members of LHCb, an international collaboration of 1,400 researchers, technicians, and engineers from 18 countries. Apart from the Brazilian researchers at CBPF and several at foreign universities, the team includes physicists from the Federal University of Rio de Janeiro (UFRJ), the University of Brasília (UnB), and the National Autonomous University of Honduras. LHCb is one of four large ongoing experiments at LHC, a particle accelerator in a circular tunnel with a circumference of 27 kilometers, about 100 meters underground. 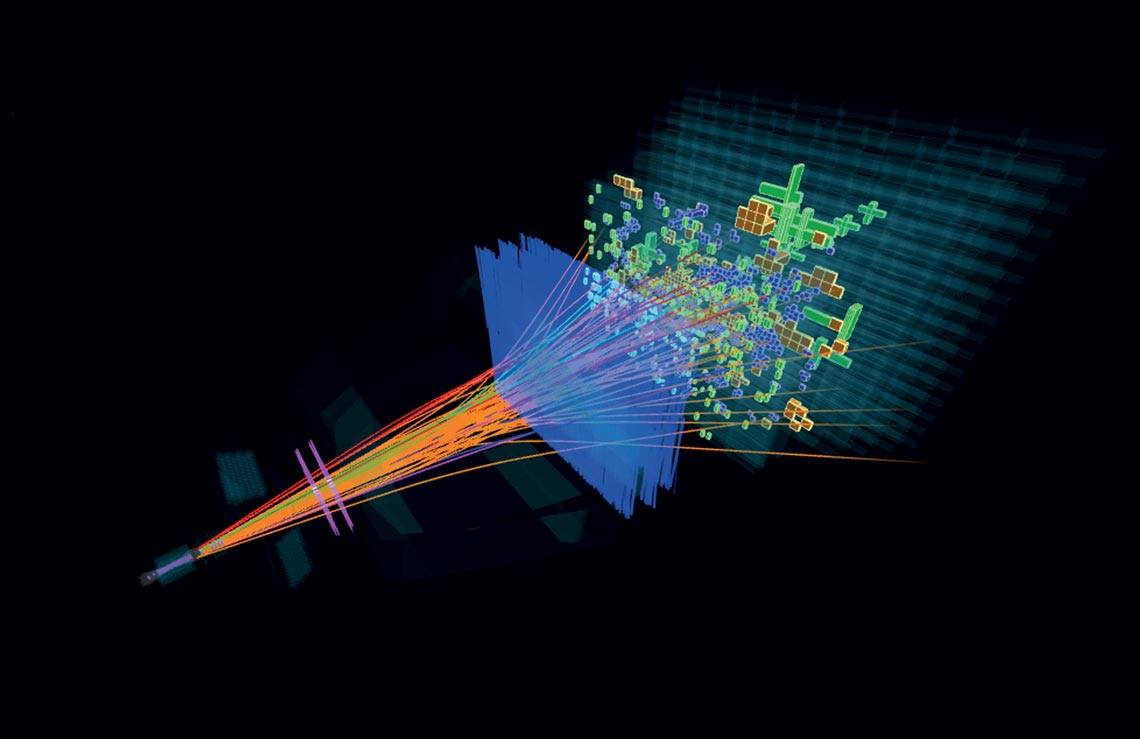 LHCb / CernComputer reconstruction of protons colliding and producing particles, such as pions and kaonsLHCb / Cern

The significance, or reliability, of the experimental results exceeds 5 sigma, i.e. there is less than one chance in 3.5 million that the final measurement is due to statistical fluctuation or error. The Brazilian researchers’ findings are not only relevant to particle physics but could also have important implications in cosmology—the study of the origin and evolution of the Universe—although the researchers believe any cosmic speculation would be premature.

Like other unstable particles, B-mesons are produced as a result of collisions between protons accelerated to near-light speed within the LHC. In their experimental work, the physicists observed how often positively or negatively charged B-mesons (and their respective antiparticles) transformed into one of four possible combinations of three lighter particles: three pions; three kaons; two pions and one kaon; or two kaons and one pion. At the dawn of the Universe, B-mesons must have spawned and decayed in a similar fashion.

The researchers recorded billions of proton collisions in the LHC and observed around 100,000 events in which, in trillionths of a second, electrically charged B-mesons decayed to produce pions and kaons. “We analyzed the data from the second cycle of proton collisions in the LHC, between 2015 and 2018,” says Laís Soares Lavra, a physicist on a postdoctoral internship at Clermont Auvergne University, in France, and a member of the Brazilian LHCb group. “We’ve been analyzing the data for five years now as part of our study.” In her doctoral research, Lavra worked with preliminary data from LHCb.

Research to gain a better understanding of the matter–antimatter asymmetry puzzle is the central goal of the LHCb experiment. CP asymmetry is the only principle within the Standard Model of particle physics that attempts to explain the tiny differences in the production of particles and antiparticles since the Big Bang. The Standard Model is the dominant theory that for half a century has explained the constituent particles of matter and almost all of their interactions (electromagnetic, strong nuclear, and weak nuclear force). The only force not contemplated by the model is gravity. 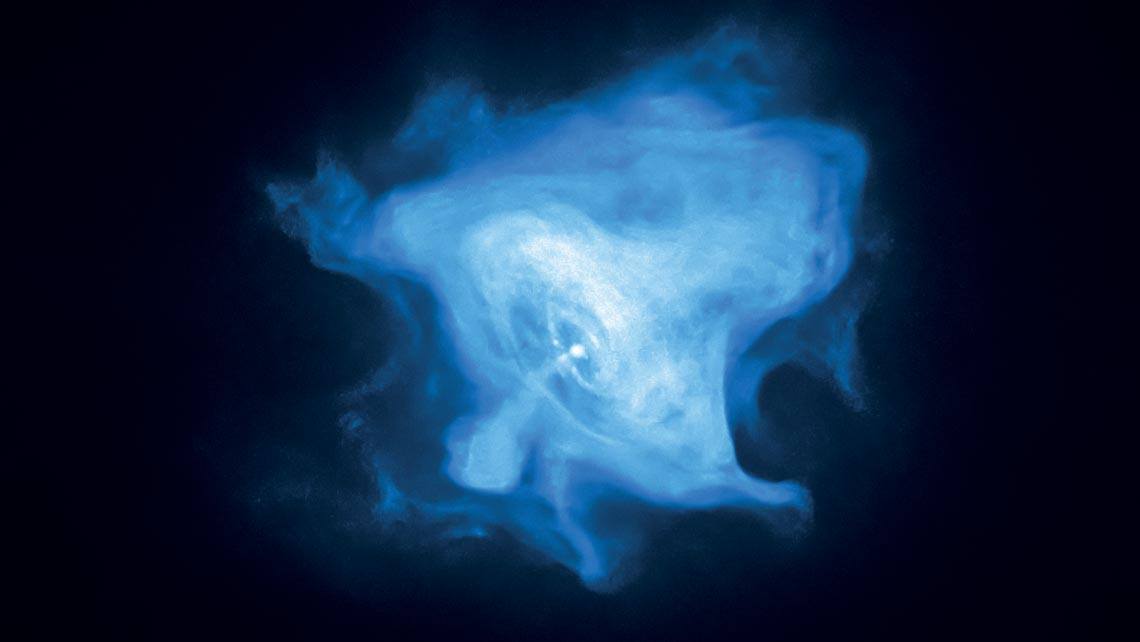 Nasa / ChandraA satellite image showing a pulsar within the Crab Nebula, emitting a jet of particles and antiparticles perpendicular to its ringNasa / Chandra

CP violation was a necessary condition for the Universe, and everything in it, to come into existence. If the amount of matter and antimatter were exactly identical, there would only be energy in the cosmos. That’s because whenever a particle and its antiparticle meet they annihilate each other immediately; they instantly disappear and release some form of light (electromagnetic radiation). Studies have shown that virtually all of the antimatter in the Universe disappeared less than a second after the Big Bang. All that remained was the residual matter.

“The Brazilian researchers’ findings at LHCb are very significant,” comments Tobias Frederico, a theoretical physicist at the Brazilian Air Force Institute of Technology (ITA), who is currently collaborating with Bediaga at CBPF but is not part of the Brazilian team working on the international experiment. “But it is still too early to offer them as a possible explanation for the prevalence of matter over antimatter in the Universe; suggesting such a link would be too big of a leap. There may be other explanations for the high degree of CP violation they found.”

Gustavo Burdman, an Argentine theoretical physicist at the University of São Paulo (USP), concurs that the study has made an important contribution that deserves recognition. He notes, however, that the high degree of CP asymmetry found by the CBPF group should not necessarily come as a surprise. “Theoretical physics is unable to make consistent predictions about what level of CP-symmetry violation would be considered normal or acceptable for this particular type of B-meson decay,” Burdman explains. “Managing to derive information from the experiment that leads to a better understanding of the asymmetry between matter and antimatter in the Universe would still be groundbreaking.”

Burdman explains that CP asymmetry is a necessary condition for, but not a sufficient explanation of, the predominance of matter in the Universe. Other changes throughout the history of the cosmos, such as the period of thermal imbalance, must have contributed to the virtual disappearance of antimatter. 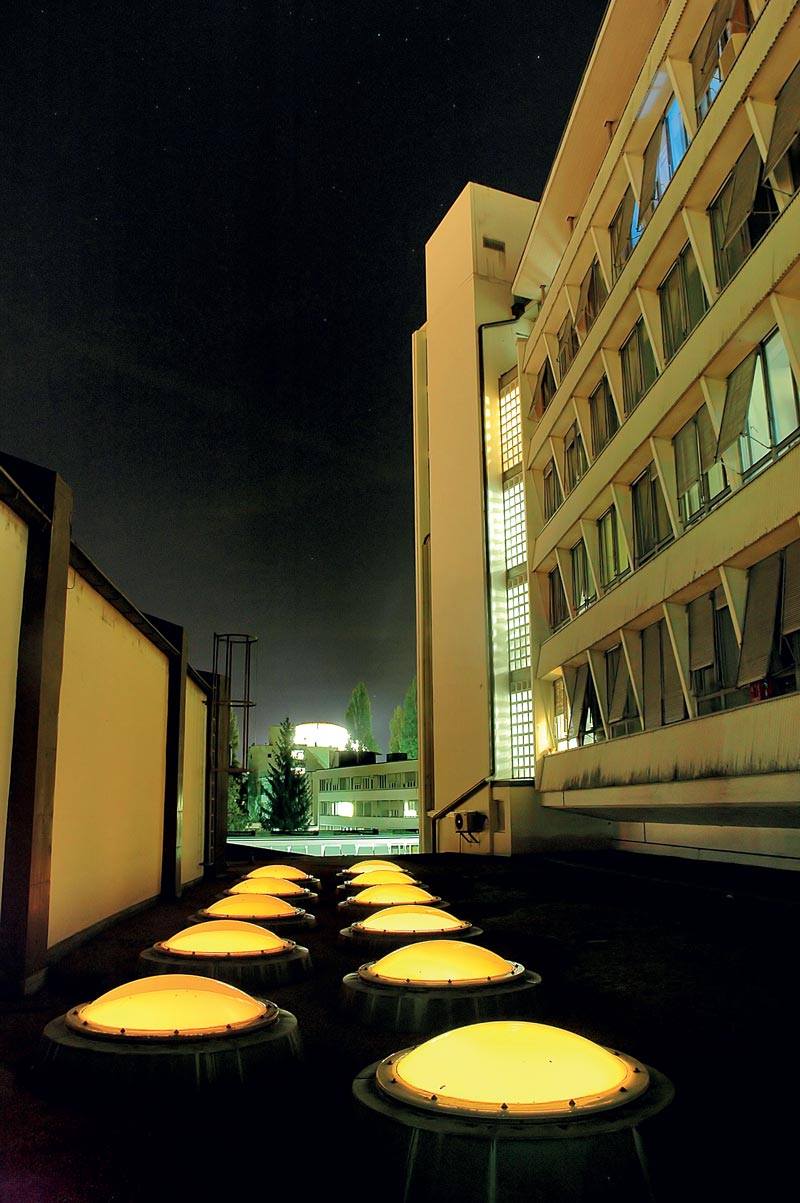 One of the buildings at CERN, on the France-Switzerland borderSerge Bellegarde / Cern

On March 3, Brazilian Minister for Science, Technology, and Innovation Marcos Pontes signed an agreement at CERN’s headquarters in Switzerland to admit Brazil as an associate member state of the European research center, home to the world’s largest particle accelerator, the LHC—CERN had greenlighted the country’s admission in September 2021. The agreement is pending ratification by the Brazilian Congress before implementation. Brazil will pay estimated fees of approximately €10 million (R$53 million) per year for its membership.

CERN’s annual budget is to the tune of €1.2 billion, and each country’s contribution is determined according to the size of its Gross Domestic Product (GDP) and other adjustment factors. Full member states pay much more than associate members. CERN’s biggest sponsor, Germany, for example, is expected to pay €240 million in fees this year. India, an associate member state with an economy 80% larger than Brazil’s, will pay €17 million in 2022.

A decade-long demand from the Brazilian physicists community, the country’s admission to CERN could bring benefits in both science and industry. Brazilian researchers will now be able to participate more actively in the experiments at LHC and other laboratories at the facility, and Brazil will have a seat on CERN’s decision-making committees. Brazilian companies will also be able to bid to provide services and equipment to CERN as part of its periodic upgrades. The center is planning to build a collider four times bigger than the LHC in the coming decades, the Future Circular Collider (FCC). The large magnets used in particle accelerators contain niobium alloys—Brazil has about 98% of the world’s known reserves of niobium.