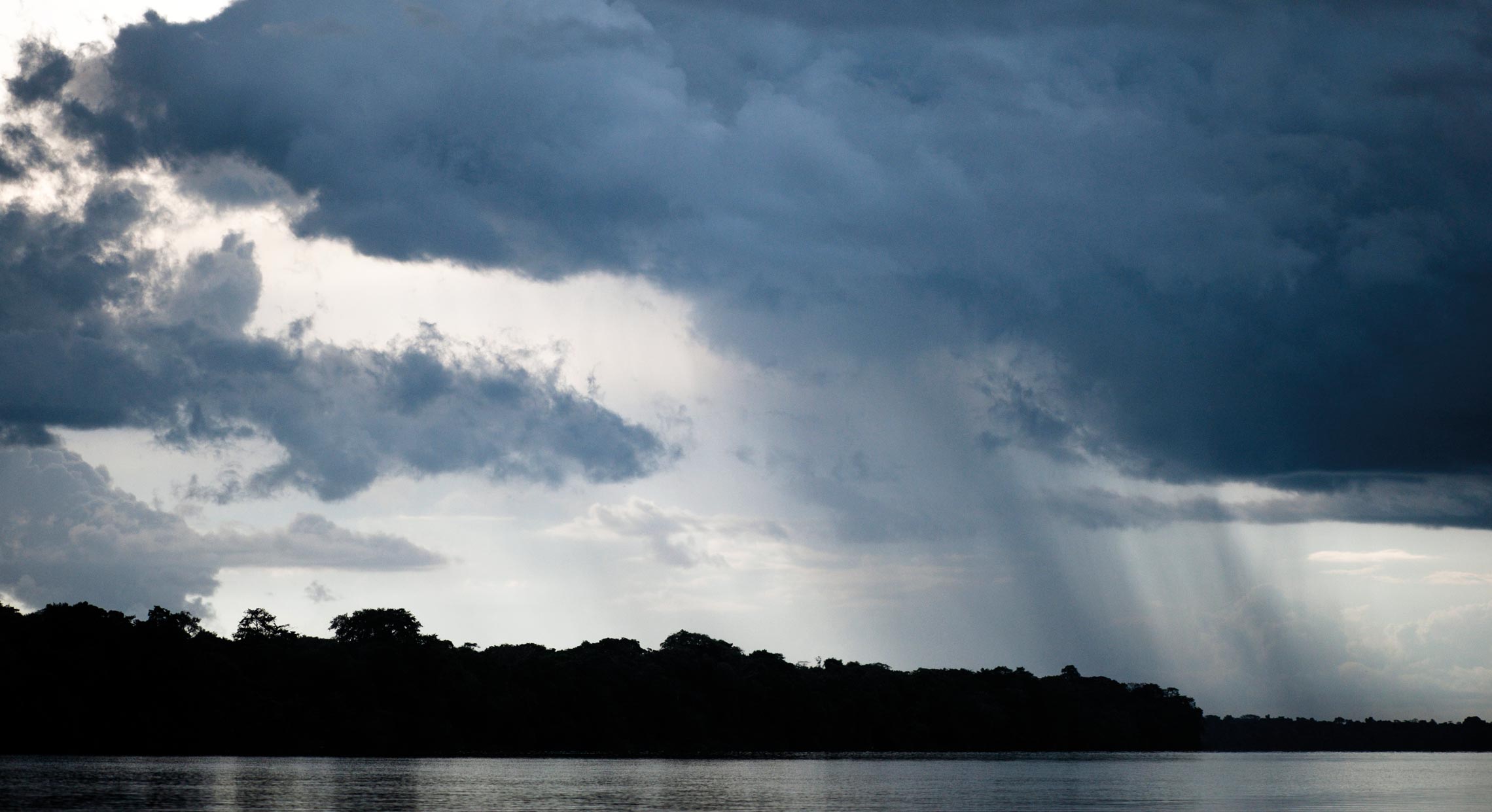 The incredible finding that storm clouds in the Amazon form differently than in other parts of the world has turned some of the fundamental principles of meteorology upside-down. At first glance, the clouds over the world’s largest forest appear the same as anywhere else: a mass of water droplets and ice crystals suspended in the air. The droplets form and grow when water vapor in the atmosphere condenses on the surface of microscopic smoke and dust particles carried by the winds, known as aerosols. Since these aerosols usually come from the soil, scientists expect their concentration to decrease with height. However, between 2014 and 2015, GOAmazon and Acridicon-Chuva, two major observation campaigns that involved Brazilian and foreign researchers, noticed the very opposite.

In the Amazon region, the highest concentration of aerosols is not found near the ground, but above the top of the largest clouds, about 15 kilometers (km) high, according to studies by participants of the two projects. The research also suggested that most of the particles suspended above the clouds have a diameter of less than 50 nanometers. Particles of this size would usually be considered too small to contribute to the formation of rain clouds, but once again, the Amazon is an exception to the rule. In an article published in the journal Science in January 2018, a team of Brazilian, German, and American researchers from both projects explained that these ultrafine aerosols are one of the key ingredients in the formation of the region’s most intense storms.

Now, in an effort to better understand these findings, meteorologists Luiz Augusto Machado, from the Brazilian National Institute for Space Research (INPE) and coordinator of the Acridicon-Chuva project, and Johannes Lelieveld, from the Max Planck Institute for Chemistry (MPIC) in Germany, have begun preparations for the CAFE Project (Chemistry of the Atmosphere – Field Experiment). “The aim of this new mission is to study the ultrafine particles that we discovered in the upper atmosphere,” says Machado. “We want to find out more about the sources of this material, how it is stored in the upper atmosphere, and how it is brought back down to Earth.”

Over the coming months, the CAFE researchers will plan routes over the Amazon to be flown by the German research aircraft HALO in 2020. HALO is an executive jet that has been modified for use in scientific research, capable of flying at altitudes of up to 16 km, which is about 6 km higher than the cruising altitude of commercial flights. It will not be the first time the aircraft has been used to study the atmosphere above the Amazon rainforest. Between August and September 2014, HALO made 14 flights as part of the Acridicon-Chuva project. From Manaus, the largest city in the Amazon, the jet flew back and forth over hundreds of kilometers, both to the northwest, where the rainforest is best preserved and the air is relatively free from pollution, and to the south, where the highly polluted “arc of deforestation” is located—a region affected by large-scale burns used to create pasture or plantations.

In addition to ground-based meteorological instruments, the GOAmazon project used atmospheric chemistry analysis equipment on another airplane, Gulfstream-1, provided by the US government’s Pacific Northwest National Laboratory (PNNL), which is capable of reaching altitudes of up to 7 km. Machado explains that the planning and approval process for data collection missions using foreign aircraft is complex and can take more than a year, as all flights require a green light from the Brazilian National Council for Scientific and Technological Development (CNPq) and the Brazilian Air Force. “We are going to fly at great heights through deep convective clouds,” says Machado.

Convective clouds are formed by vertical air currents and fluctuating temperatures. Deep convective clouds are very large, like great towers of cotton, 10 to 15 km wide and up to 15 km high, known by meteorologists as cumulonimbus clouds. They are the predominant type of storm cloud formed above the Amazon at the end of the “dry” season between September and November, when rains occur less frequently, although they are more intense. They are also more common in the Metropolitan Region of Manaus and in areas with a high number of fires. In the rainy season and in the best-preserved areas of the rainforest where pollution is low, cumulonimbus clouds are generally smaller and less intense. Here the clouds are shallower, providing a lighter but more constant source of rain.

“The HALO pilot does something that all pilots know is dangerous: flying through a deep convective cloud,” says meteorologist Rachel Albrecht, from the University of São Paulo (USP), who has been collaborating with Machado since the beginning of the GOAmazon and Acridicon-Chuva projects. The dangers are many: turbulence caused by air currents, ice that crystallizes on the fuselage and makes it heavier, hailstones hitting the windows, and potential lightning strikes. According to the researcher, there is still much to understand about how ice and lightning are formed in convective clouds. “Lightning is created by clashes between ice particles inside the cloud,” explains Albrecht.

In December 2017, meteorologist Micael Cecchini, supervised by Machado, defended his PhD thesis on how pollution from Manaus affects the formation of clouds and rain in forest regions near the Amazon metropolis—his paper was named best geosciences thesis in 2017 by CAPES. Cecchini used data from the GOAmazon and Acridicon-Chuva projects to gather evidence on how the high concentration of aerosols caused by pollution increases the number of water droplets in shallow clouds during the rainy season, but decreases their size. “Doubling the level of pollution in the air increases the number of droplets in a cloud by 84% while decreasing their average diameter by 25%,” says Cecchini.

The Acridicon-Chuva and GOAmazon projects confirmed that in the Amazon, where rivers and plant transpiration create an abundance of water vapor, the cloud and rainfall type of a particular season or region are primarily dependent on the number of aerosol particles in the atmosphere. The more aerosols there are, the less water vapor condenses on each of the particles suspended in the air. An abundance of aerosols results in clouds with a high number of very small droplets. Smaller droplets, in turn, have less chance of colliding and merging to form larger droplets. Drops that form relatively large tend to grow rapidly and then fall to the ground as rain.

In areas of untouched rainforest where aerosol levels are low, shallower clouds form and quickly dissolve as light rain. “These larger drops make the cloud more transparent and create rainbows,” says MPIC geochemist Meinrat Andreae, who participated in the Acridicon-Chuva project. In regions affected by urban pollution from Manaus and smoke from fires used to clear forest, aerosol levels are thousands of times higher than in areas of pristine rainforest. This results in the formation of a great number of small water droplets capable of remaining suspended in the air for a long time. Many of these droplets are carried to great heights by rising air currents, where they freeze and form ice crystals before falling back down to earth. “These clouds do not normally produce rain. Only when they reach more than 12 km thick do they generate heavy rain, with hail and lightning.”

Biogeochemical cycle
The CAFE mission is part of a larger research project funded by FAPESP and coordinated by Paulo Artaxo, a physicist from the USP Institute of Physics and a specialist in how aerosols are created in the Amazon. Over the course of more than three decades of research, Artaxo and his Brazilian and international colleagues have discovered how a series of volatile organic compounds naturally emitted by the rainforest influence the formation of clouds and rain in the region. “As part of CAFE, we will investigate the air convection within clouds that carries volatile organic compounds to great heights and the processes that transform them into nanoparticles,” says Artaxo.

In January 2018, a theory published in the journal Atmospheric Chemistry and Physics described how the entire biogeochemical cycle may work by linking gases created by the rainforest to the formation of clouds and ultrafine aerosol particles. “We show how ultrafine aerosols are formed from gases brought down from the upper atmosphere by convective clouds,” says Andreae, lead author of the study.

The cycle proposed by the researchers begins when upward air currents in convective clouds carry volatile organic compounds, such as terpenes and isoprene, up from the rainforest. During their journey to the top of the clouds some 15 km above, these gases undergo physical changes and chemical reactions that transform them into the ultrafine aerosols observed by the HALO instruments. The ultrafine aerosols then gather in the upper atmosphere until a downward air stream, created by another convective cloud, carries them back down.

This theory would explain the observation published by the same researchers in the journal Nature in October 2016, proposing that heavy rainfall increases the concentration of ultrafine aerosols on the ground. According to the Brazilian researchers and their international partners, the ultrafine aerosol particles undergo further physical and chemical changes on their journey back down to ground, increasing their ability to condense water. Near the ground, they combine with volatile organic compounds emitted by the rainforest, a source of larger aerosols that remain at low altitudes, resulting in the formation of new rain clouds. The process is thus a continuous cycle fed by the gases.