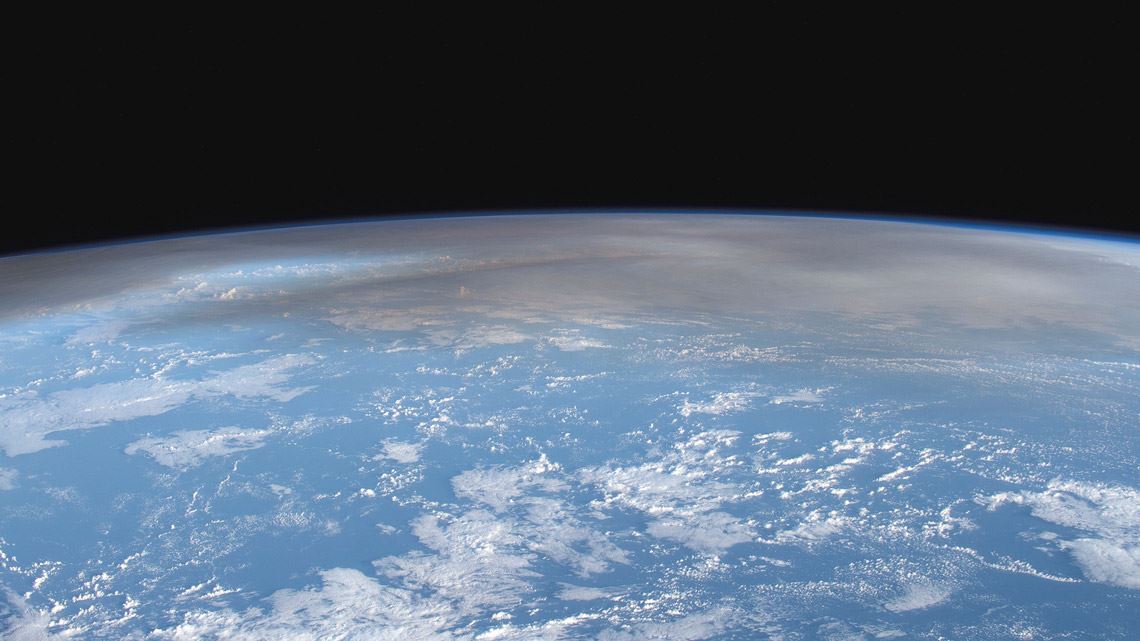 The atmospheric plume the volcanic eruption in Tonga released, as seen from the International Space Station

At 1:56 am on January 26, the IPEN (Brazilian Institute for Energy and Nuclear Research) weather radar detected a heavy concentration of aerosols—fine particles suspended in the air—about 27 kilometers (km) above the city of São Paulo. The aerosols appeared to form a line across the top of the image of the sky. The event was extremely rare, occurring in the stratosphere—the second layer of the Earth’s atmosphere, found immediately above the troposphere—which stretches from 16–18 km to 50 km altitude above the São Paulo state capital.

On clear, dry nights, as was the case in January, the radar usually observes two types of horizontal cloud in the sky. The most common and thickest is located between 3 and 4 km altitude, created by the accumulation of pollution produced by cars, industry, and other activities in the metropolis. The second type is cirrus clouds, composed of supersaturated water vapor and microscopic ice crystals, which are less dense, not always present, and form at around 10 km altitude. The only plausible explanation for such a high concentration of aerosols above 20 km altitude that morning was that ash from a recent major volcanic eruption had reached the stratosphere.

“The last time we saw anything like this was in 2015, when the Chilean volcano Calbuco erupted. But its aerosol plume only reached a maximum altitude of 17 km,” says physicist Eduardo Landulfo, head of IPEN’s Laboratory for Environmental Laser Applications, which manages the radar. “We didn’t expect the radar to be capable of detecting aerosols at almost 30 km altitude.” Landulfo is one of the lead researchers on a project funded by FAPESP to study air quality in Greater São Paulo. 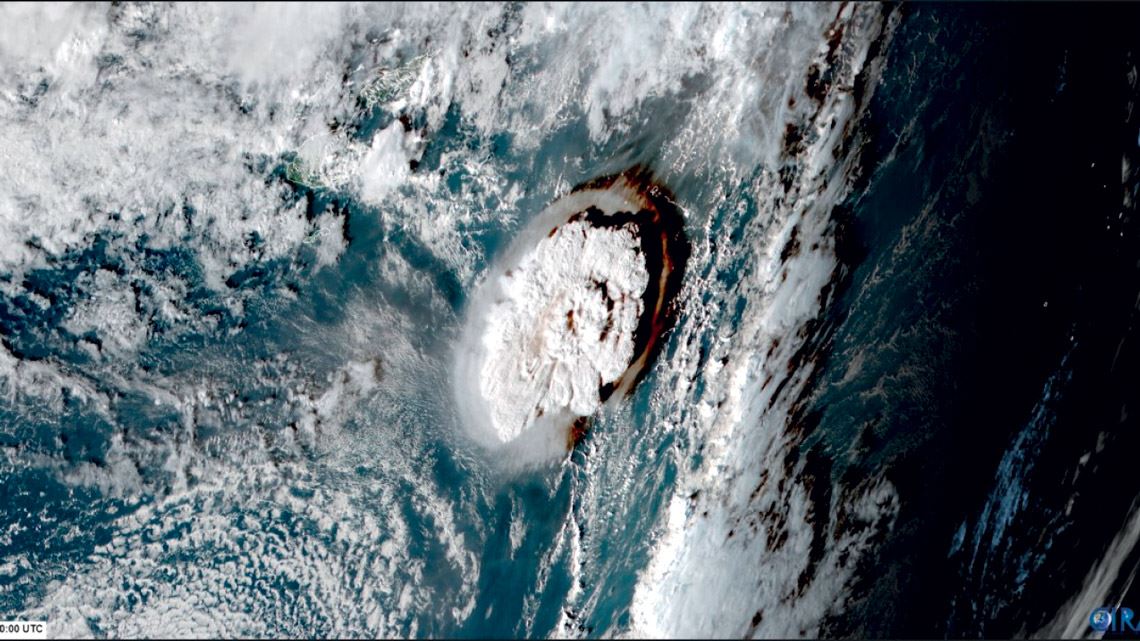 The unusual cloud of suspended particles observed by the radar was a result of the major eruption of Hunga Tonga–Hunga Ha’apai, an underwater volcano located 65 kilometers north of the main island of the Tonga archipelago in the South Pacific, on January 15. The volcanic activity was so intense that it split Hunga Tonga–Hunga Haʻapai into two. Shortly after the event, scientists from countries in the Southern Hemisphere, such as Australia and New Zealand, began tracking the smoke plume using radar, satellites, and other instruments.

The major volcanic explosion in Tonga caused a tsunami, with waves up to 15 meters high reaching the islands of the archipelago, home to 100,000 people. At least six people died and thousands were left homeless. The noise of the eruption was heard in New Zealand, nearly 2,000 kilometers away. An enormous plume of volcanic ash covered Tonga for 11 hours. It was formed primarily of sulfur-based gases, water vapor, and carbon dioxide.

In mid-February, researchers from NASA conducted a preliminary analysis of data from two geostationary weather satellites, GOES-17 and Himawari-8, concluding that the volcanic plume from Hunga Tonga–Hunga Haʻapai reached the highest altitude ever recorded for this type of phenomenon. Thirty minutes after the eruption, the cloud of gas, steam, and ash expelled by the submarine volcano in the South Pacific reached an altitude of 58 km, penetrating the mesosphere, the third layer of the atmosphere, which stretches from approximately 50 km to 100 km in altitude. “The intensity of this event far exceeds that of any storm cloud I have ever studied,” said Kristopher Bedka, a climate scientist from the NASA Langley Research Center, in a press release. The previous record was held by the 1991 eruption of Pinatubo, a volcano located in the Philippines, which ejected ash to an altitude of 35 km.

Volcanic eruptions so powerful that their plume reaches the stratosphere can temporarily alter the global climate, reducing the planet’s average temperature for several months. Aerosols block some sunlight from reaching Earth, cooling the environment (see Pesquisa FAPESP issue no. 308), hence the interest in these extreme events among atmospheric scientists, as well as geologists and volcanologists, of course. “The aerosols from the Pinatubo eruption cooled the planet’s average temperature by about 0.6 °C for almost two years,” says Márcia Akemi Yamasoe, a physicist from the Institute of Astronomy, Geophysics, and Atmospheric Sciences (IAG) at the University of São Paulo (USP). “But it’s too early to predict whether the Tonga eruption will have a similar impact on the global climate.”

Unlike in the troposphere, which is the lowest layer of the atmosphere, there are no rain clouds in the stratosphere or mesosphere. This makes pollutant dispersal slower in the upper layers of the atmosphere, which has so far been the case for the Tonga volcanic plume. “Aerosols can circulate around the globe for months or even years,” says Landulfo.

The IPEN weather radar uses lidar technology, a remote sensing method in which a laser measures the location of objects relative to the Earth’s surface. Because we know the speed of light (about 300,000 km per second), we can use the time a laser beam takes to bounce off a layer of aerosols and return to its source to calculate the exact distance to a cloud of suspended particles.

The IPEN radar is specifically programmed to detect the presence of aerosols ranging from a few nanometers to a few micrometers in diameter, such as urban pollution, smoke from fires, water vapor, and dust. It is primarily used to study air quality and climate in Greater São Paulo and is part of the Latin American Lidar Network (LALINET).

“Since we first identified the plume from the Tonga volcano eruption, we have been using the radar to follow its movement whenever the observation conditions at night are good enough”, says Fábio Juliano da Silva Lopes, a physicist doing a postdoctoral fellowship in Landulfo’s group at IPEN. On some days, researchers at the institute noted that the plume was actually divided into three clouds located at different altitudes of around 22, 25, and 27 km.

Preliminary data from international sources indicate that the Tonga submarine eruption likely reached level 5 on the Volcanic Explosivity Index (VEI), a logarithmic scale ranging from 0 (weakest) to 8 (strongest). The index provides a relative power rating of volcanic eruptions, similar to the better-known Richter scale, which measures the magnitude of earthquakes. The volcanic explosion that occurred earlier this year on the outskirts of the Tonga archipelago in the South Pacific was the most powerful since the 1991 Pinatubo eruption, which reached a VEI of six.

The Tonga Archipelago is located in the South Pacific (see globe). The eruption destroyed almost the entire island of Hunga Tonga–Hunga Ha’apai, with just two small points on opposite sides remaining above waterNASA Earth Observatory

Volcanoes deep under water rarely erupt powerfully enough to overcome the resistance of the sea. Normally, the ocean substantially impairs their explosive force. “But the Tonga eruption was so intense that it made up for the fact that it happened underwater. This is the first time that such a specific event has been observed by satellites, lidar, and other remote sensing instruments, all developed in the second half of the twentieth century,” says Cuban physicist Juan Carlos Antuña-Marrero, an expert in aerosols from the University of Valladolid, Spain, in an interview with Pesquisa FAPESP.

The base of Hunga Tonga–Hunga Haʻapai on the ocean floor lies at a depth of 2,000 meters and is part of the Tonga-Kermadec arc, a chain of submarine volcanoes regularly subjected to seismic activity. But the mouth of the volcano that erupted on January 15 was less than 250 meters under the surface—shallow enough that the ocean did not suppress the full force of the eruption, but deep enough to cause an explosive reaction, with the lava quickly heating the water and turning it into steam, a gas that expands rapidly. This could explain the height of the plume created by the eruption.

Despite not being as powerful as the Pinatubo eruption, the Tonga volcano explosion has generated surprising data in less than a month of study. In the hours following the event in the Pacific, NASA’s Aqua satellite observed the production of shock waves, seen as concentric circles that traveled through the atmosphere of the entire globe several times. The waves began at the ocean surface and reached as high as the ionosphere, at more than 100 km altitude.

Landulfo, Antuña-Marrero, and other researchers from Brazil and abroad are planning to carry out joint studies in the coming weeks to try to understand the characteristics of the plume from the Tonga volcano and its impacts on the climate. The IPEN researcher is in talks with NASA colleagues about releasing weather balloons capable of reaching the height of the plume to take measurements. This has already been done on Réunion Island, in the Indian Ocean, where the smoke trail from the Tonga eruption can be seen in the troposphere. At the time of writing, the IPEN radar can still see the volcanic plume about 30 km above the city of São Paulo.