CNH Industrial, a global leader in the manufacture of agricultural equipment, plans to launch the world’s first biomethane-powered tractor in Brazil within the next two years. The vehicle is being developed jointly by research and development (R&D) teams in Brazil and Italy. Five generations of prototypes have been produced based on the T6, a tractor range marketed by the group’s agricultural division, New Holland Agriculture. The latest-generation prototype was unveiled at Agrishow 2018 last May in Ribeirão Preto (SP), and is now being tested on a grain and pig farm in Castro, Paraná.

“Our biggest breakthrough was that we were able to engineer a biomethane powertrain that develops the same power and torque as its diesel counterpart,” says mechanical engineer André Faria, a product-marketing specialist at FPT Industrial, CNH Industrial’s powertrain business. Biomethane is a biofuel in the form of gas emitted by decomposing organic matter—such as crop or animal waste—which is purified to remove moisture, carbon dioxide (CO2), and hydrogen sulfide. It has 30% less energy content than diesel, which means 1 liter of biomethane generates 30% less energy than 1 liter of diesel.

Faria explains that the 6-cylinder engine was engineered to deliver this performance by incorporating purpose-designed parts including pistons, pumps, and the fuel injection system. It also features stoichiometric combustion software (which relates quantities of reagents and products) to ensure the air and biomethane mix is optimally balanced during combustion. The engine produces 10% less CO2 emissions and 80% less total emissions compared to diesel. It also provides lifecycle running cost savings of 30% by requiring less maintenance.

Another advantage, explains Sérgio Soares, head of product development and agricultural engineering at CNH Industrial for Latin America, is that farmers can use biodigesters to produce their own biogas and become energy sufficient.

According to the Brazilian Association of Biogas and Biomethane (ABiogás), collected but unused waste materials in agriculture could generate 59 million cubic meters (m3) of biomethane per year in Brazil. Another 4.5 million m3 per year could be produced with materials from public sanitation. With the two combined, the total biomethane volume would be enough to replace 70% of diesel consumption in Brazil.

ABiogás expects biomethane production to reach 500,000 m³ per day—or 182.5 million m³ per year—in 2019. Brazil’s National Petroleum Agency issued regulations on the production, storage, and use of biomethane only very recently, in 2017. And while production in Brazil is still incipient, ABiogás expects it will grow to 32 million m³ per day by 2030. The cost of biofuel—half the price of diesel—provides an enticing incentive. 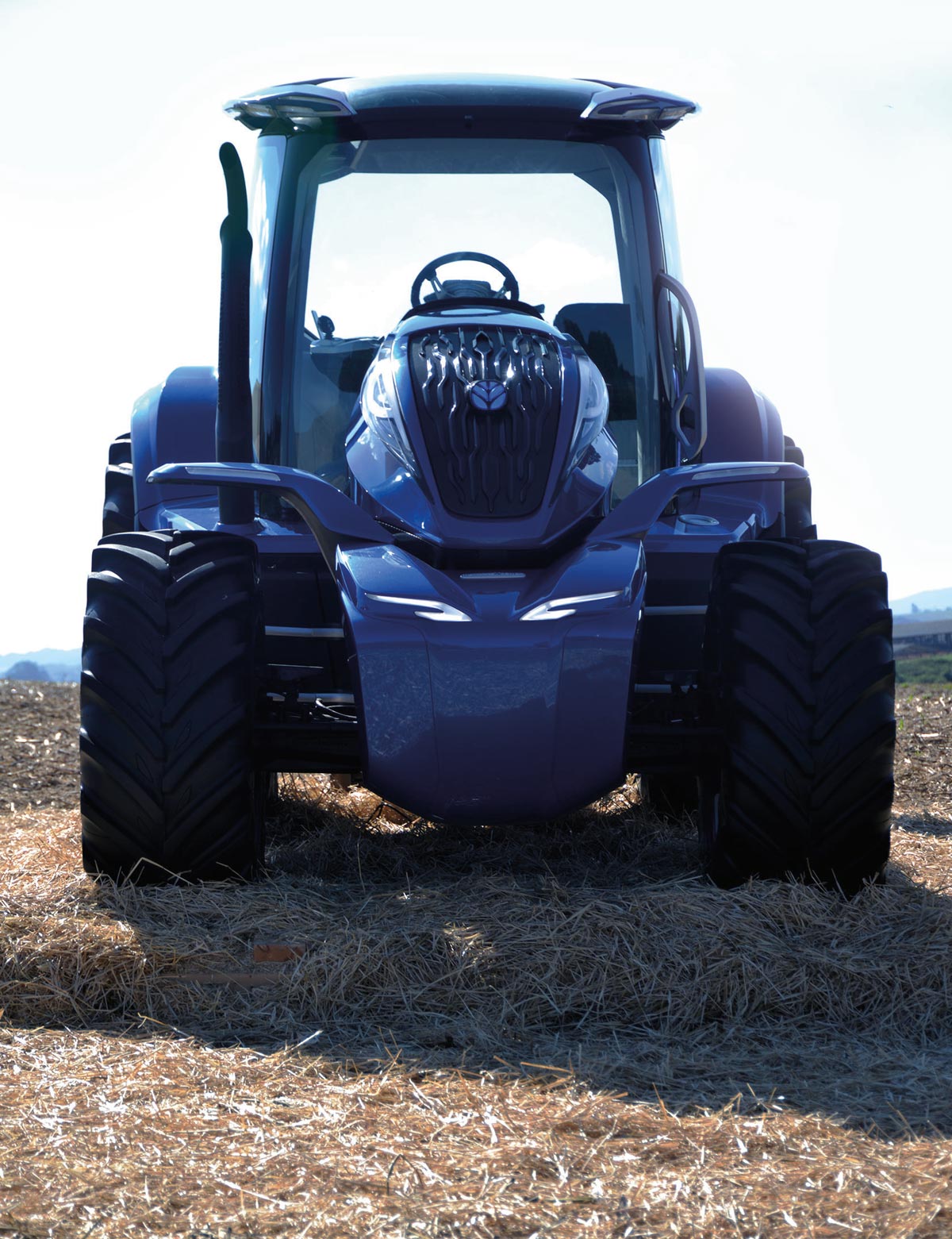 In Europe and the US, natural-gas-fueled trucks and buses are already fairly common. FPT Industrial alone has equipped more than 30,000 vehicles with natural gas engines. Tractor powertrains, however, need to be specially engineered for severe conditions, including rugged terrain, heavy draft loads, low groundspeeds, and heavy-duty usage.

Tractor engine designs are also different in Brazil than in Europe. With the Brazilian version at a more advanced stage of development, it is expected to reach the market before its European cousin. The company’s engineers are now working to lengthen the tractors’ autonomy. Today, a biomethane-powered tractor can operate without refueling for 80% as long as its diesel-powered stablemate. “Our goal is to match or even exceed the autonomy of diesel tractors before launching a commercial version,” says Soares.

The joint efforts of multiple R&D teams at CNH Industrial to develop the new tractor illustrate the company’s approach to R&D. “We intensively share information, experience, and experiments across global marketing, production, and research teams to support innovation and the development of new products that are marketed globally but have features addressing local requirements,” says Soares.

Created just five years ago following the merger of Fiat Industrial and CNH Global, CNH Industrial manufactures not only agricultural equipment, but also trucks, buses, engines, and construction machinery under 12 brands, including Iveco, Case, New Holland, Magirus, and FPT Industrial. It has 64 manufacturing sites around the world—seven in Brazil. In 2017 CNH Industrial posted revenue of US$27.4 billion and invested US$950 million in projects at its 53 R&D centers, where a total of 6,000 individuals are dedicated to innovation. 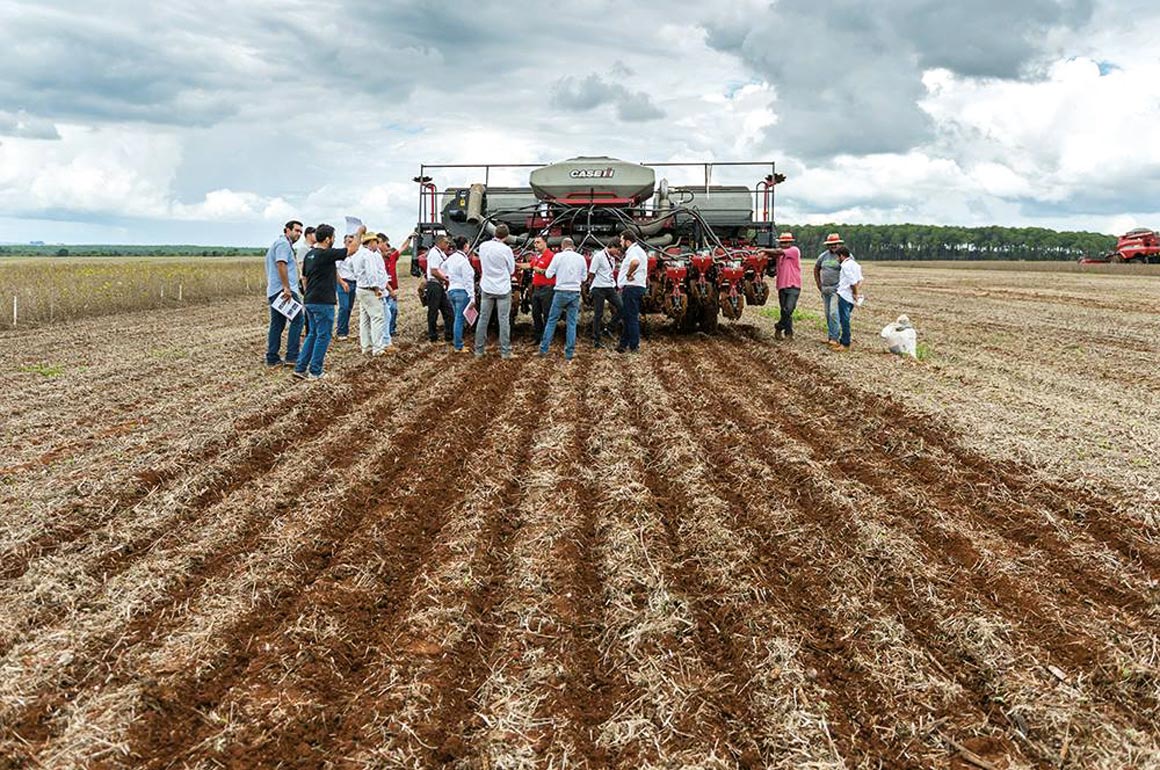 Its six R&D centers in Latin America, of which five are in Brazil, had a budget of US$100 million in 2017. These centers are staffed by some 600 R&D professionals, nearly all with engineering degrees, including 12 PhDs, 36 masters, and 18 currently pursuing a master’s degree. The group owns 9,600 active patents globally, and 900 in Brazil. According to data from the National Institute of Industrial Property (INPI), the company filed 150 new patent applications in 2017, ranking seventh among the top applicants in the year.

CNH Industrial reports that 46 of its patent applications in 2017 were the work of Brazilian inventors. Innovation within the group is driven not only by R&D centers, but also by programs that encourage employees to share ideas, and by collaborations with suppliers. CNH Industrial also codevelops projects with universities such as the Federal University of Minas Gerais (UFMG), the University of Campinas (UNICAMP), and São Paulo State University (UNESP), and research institutions such as the Institute for Technological Research (IPT), the Campinas Institute of Agriculture (IAC), the Center for Sugarcane Technology (CTC), and the Brazilian Agricultural Research Corporation (EMBRAPA).

The company filed 150 patent applications at the INPI in 2017, ranking seventh among the top applicants in the year

Agricultural innovation
Agribusiness is the most prolific field of research in Brazil, accounting for more than half of CNH Industrial’s patent applications in 2017. “Brazil is continental in size and more geographically diverse than Europe. We develop solutions that are engineered for local conditions,” says Soares. An example is the Case Axial-Flow 230 Extreme combine harvester, developed in Brazil and Argentina and launched in 2017. It features a new rotor, dubbed “Extreme,” which operates alternately back and forth and incorporates rasp bars and separator bars that are better suited for threshing grains that are greener and moister than in other regions of the world. “This provides a 10% improvement in productivity,” says Soares.

Telemetry is another focus of the agricultural R&D team. The company has developed a system for measuring parameters and transmitting information that uses onboard modems and a server that can be accessed from a web portal. Telemetry allows managers to view real-time data about the status of their equipment, explains José Paulo Molin, a professor of biosystems engineering at the Luiz de Queiroz College of Agriculture (ESALQ) of the University of São Paulo (USP), in Piracicaba. This allows them to detect and correct any farm logistics issues and ensure harvesters, tractors, trucks, and the plant are well synchronized, while also supporting predictive maintenance to minimize unplanned downtime.

“Poor information management is one of the major causes of low productivity when it comes to agricultural machinery in Brazil. Farm connectivity will enable technologies like telemetry and the internet of things [IoT] to be used to solve these issues,” says Molin. 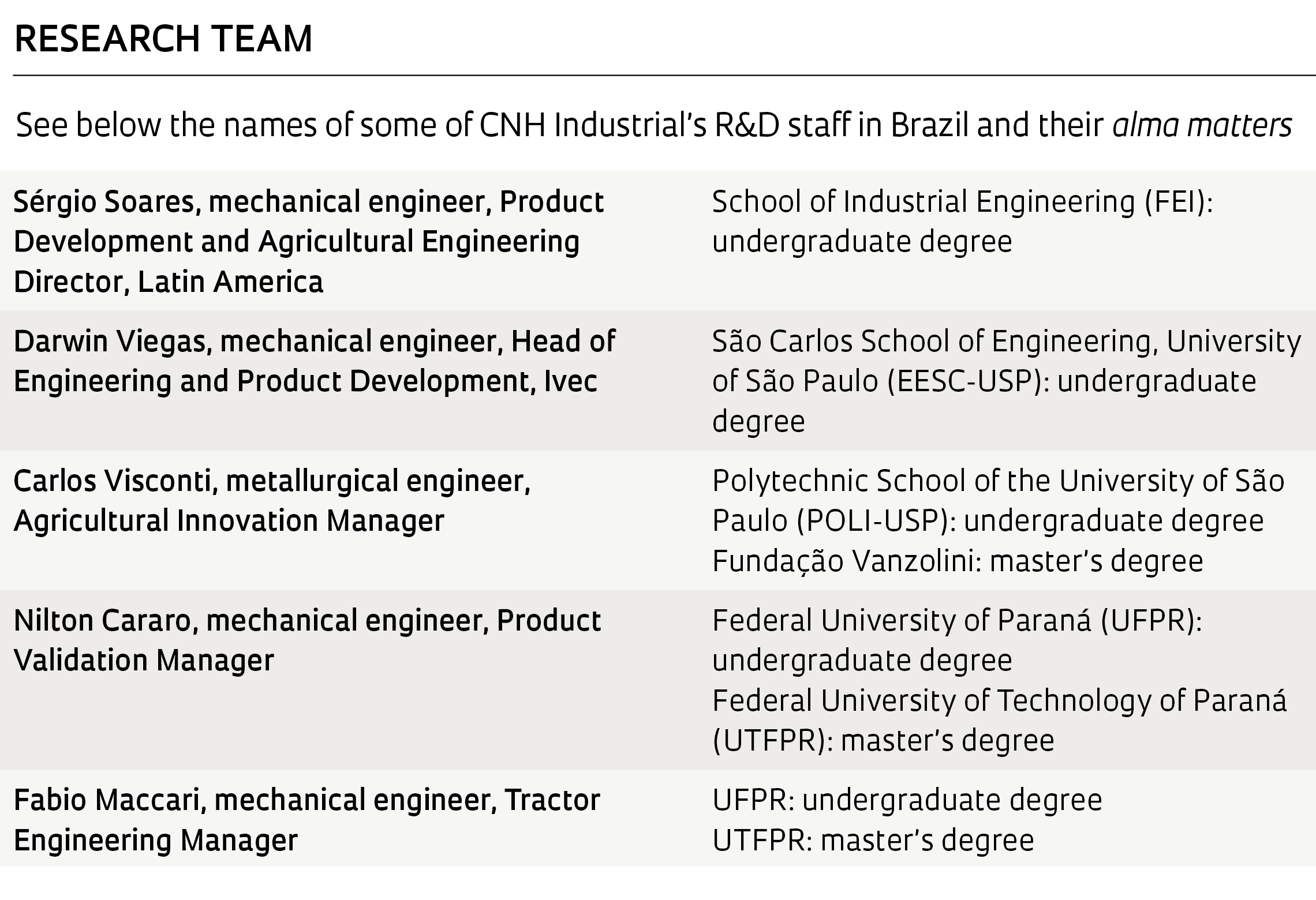 In May 2018, Iveco launched the Daily City 30S13, a version of its global range of light commercial vehicles designed for the Brazilian market. “It is ideally suited for business owners who need to deliver goods or transport raw materials,” explains Viegas.

The Daily City has a lighter chassis, suspension and powertrain package, increasing its rated payload capacity by 300 kilograms (kg) to 1,800 kg. The chassis, for example, has frame members that are 4 millimeters (mm) thick, down from 5 mm in the original model. Another weight-reducing factor is the vehicle’s use of rear wheel drive, whereas vehicles in this market are typically front wheel drive. It also features the new F1A engine, developed by FPT in Brazil for improved responsiveness and fuel economy. “The last-mile delivery market is growing worldwide. The Daily City is a local product with global potential,” says Viegas.