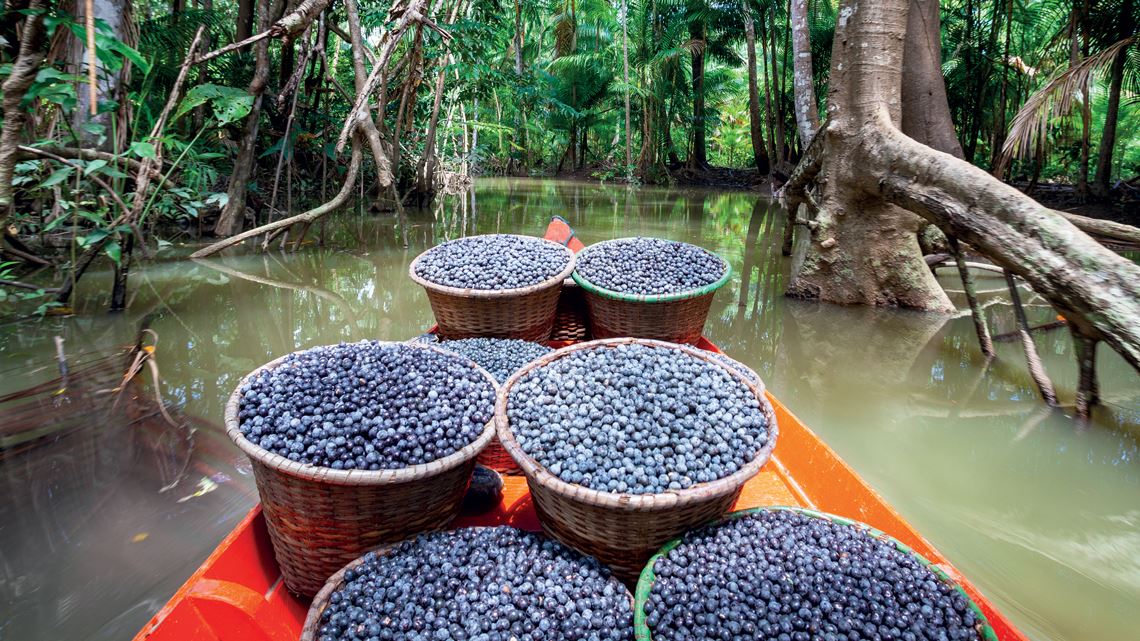 Freshly harvested açaí being transported in the Amazon

Açaí production harms Amazonian biodiversity and the ecosystem services provided by riverside forests, such as carbon retention and climate regulation. According to a study published in the scientific journal Biological Conservation in July 2021, the increased number of açaí palm trees (Euterpe oleracea) caused by deliberate forest management has led to a drop in the number of plant species in the floodplains of Amazonian rivers.

By analyzing 47 distinct areas of forest in the Amazon River estuary in Pará, researchers from Brazil and abroad observed a direct relationship between açaí palm density and forest impoverishment. According to Madson Freitas, a biologist from the Federal University of Pernambuco (UFPE) and lead author of the study, about 60% of woody species are lost in areas with 200 clusters of açaí palm per hectare. “The forest has a natural average of about 100 açaí palm tree clusters per hectare. In managed regions, that figure doubles. Açaí cultivation is only considered intense when it exceeds 400 clusters per hectare. But I have found regions with 1,200 clusters,” says Freitas. A palm cluster is a set of trunks of the same plant that grow very close to each other.

In addition to the biodiversity risks, intensive palm management can also result in other losses. “Intensification of palm tree cultivation impoverishes the life and functioning of the floodplain forest,” says Ima Vieira, an agronomist from the Emílio Goeldi Museum of Pará (MPEG) and a coauthors of the study. “Assessing and measuring functional losses is the main contribution of the article,” she says. The study found that the functions and services performed by other species in the rainforest dropped by half in regions with 600 açaí clusters per hectare.

Some of the worst impacts of forest impoverishment include decreased soil fertility, loss of pollinators, and lower species diversity in the understory—the lower layer of the forest, below the canopy (the highest layer) where low vegetation grows—which affects the forest’s dynamics and its capacity to withstand and recover from bad weather and climate change.

Freitas attributes this situation to a vicious cycle in açaí management: first, the understory is thinned out, reducing the number of plants that usually compete for space with açaí palms and stop them from proliferating. Then the canopy is pruned, with some huge trees, such as the kapok and the Guiana chestnut, cut down to give the palms more sunlight. Species that can be used for timber, which therefore have commercial potential, such as the baboonwood tree, are also cut down. These measures lead to soil depletion because there are fewer deep roots for the nutrient cycle and fewer leaves falling to provide organic matter. “On top of this, when the forest around the açaí plam is uprooted, the homes of many pollinators, which are directly linked to fruit productivity and quality, are also destroyed,” highlights the biologist.

The process of eliminating some plant species to encourage açaí palm growth is called green deforestation. Identifying the phenomenon is not easy. The only way to discover the impact of an overly abundant species on the surrounding biodiversity is through field observation. Some species that the açaí producers allow to remain give a false idea of a dense vegetation cover, according to the researchers. It only takes a few large trees with wide crowns to give the appearance of 100% vegetation cover in a small area on satellite images. “It is only possible to identify that the understory covered by these few trees has been overtaken by açaí by examining the area in person,” says biologist Maria Fabíola Barros, who was not one of the authors of the Biological Conservation article but is studying açaí on her postdoctoral fellowship at MPEG. Investing in more refined satellite imagery is one way of closing the gap between what can be seen from above and what is observed from within the forest.

The article questions the prevailing theory that the extraction of non-timber forest products (NTFPs), defended as a way of preserving the environment while reducing poverty in forest-dependent communities, is a system that benefits everyone. “Açaí is always seen as an example of sustainability. Theoretically, its cultivation requires no trees to be cut down and provides a source of income, improving the quality of life of many riverside producers,” explains Vieira. “But from the 1990s onwards, açaí has exploded commercially, leading to increasingly intensive management. This impoverishes the forest.” According to data from the Brazilian Institute of Geography and Statistics (IBGE), 1.5 million tons of açaí was harvested in Brazil in 2020, more than 90% of which came from Pará. The market was worth R$4.7 billion, equivalent to 1% of all Brazilian agricultural production last year.

Marcelo Tabarelli, an agronomist from UFPE’s Botany Department and another coauthor of the study, says the açaí situation illustrates the dilemma of exploiting the forest without suffocating it: “Açaí has become a commodity, growing in demand in Brazil and abroad—a star of the bioeconomy. But like any extractive industry, if it is not managed properly, what was an opportunity becomes a threat to the integrity of the ecosystem.”

Tabarelli argues that producers and managers need to adopt stricter regulation, training, and information policies to ensure açaí cultivation is compatible with forest maintenance. “Açaí will likely soon enter a new production phase, in which varieties adapted to dry land will expand the crop’s cultivation limits to areas outside the floodplain. If this happens, these new areas could compete with the forest in these areas. They could, however, offer a better alternative than other forms of land use currently competing with the forest, such as pasture and soy monoculture.”