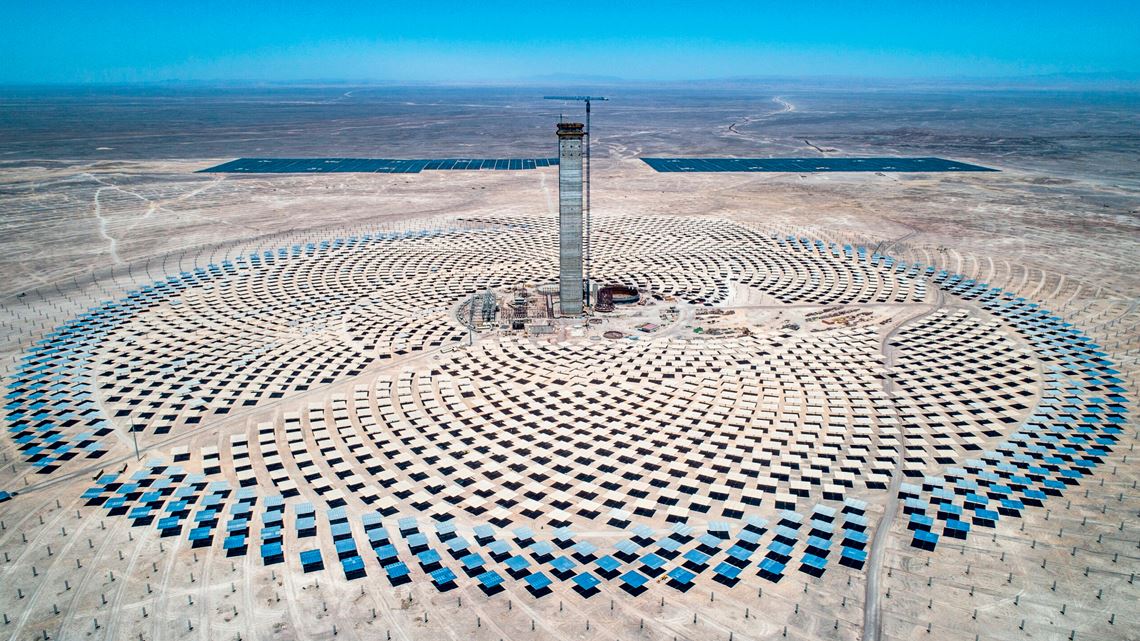 Brazil’s first experimental projects for generating solar thermal energy are in the implementation phase and should go into operation over the next several months. This type of solar energy, known internationally by the acronym CSP, for concentrated solar power, uses solar energy captured from the sun to heat a fluid that then drives a steam turbine, producing electricity. The principle is the same as for any thermoelectric plant, but uses a 100% renewable, abundant, and clean energy source, solar irradiation, instead of environmentally dangerous fossil fuels such as gas, oil, or coal.

One example of a CSP plant is Cerro Dominador, a large plant that opened in June in Chile’s Atacama Desert. Built at an altitude of 3,000 meters, in a circular area of more than 700 hectares (equivalent to 700 city blocks), the plant has 10,600 heliostats—mirrors or sets of mirrors able to rotate to follow the sun’s trajectory—reflecting light towards the top of a 252-meter-high central tower. The receiver located at the top of the tower is heated to a temperature of 560° Celsius, transforming molten salts (fluoride, chloride, or sodium nitrate, among others) into a fluid, used to produce steam that drives its turbines and generators, which have a generation capacity of 110 megawatts (MW). Each heliostat has about 140 square meters (m2) of surface area.

With the help of a supplementary photovoltaic structure, the Chilean facility—a pioneer in Latin America—generates 210 MW, enough to power 380,000 homes. More common in Brazil and globally, photovoltaic solar energy employs sunlight striking on semiconductor plates, such as those installed on the roofs of houses and buildings and in generator parks. Commonly made from silicon cells, photovoltaic systems convert solar irradiation into electrical energy.

In Brazil, the most advanced solar thermal project is under development by the Companhia Energética de São Paulo (CESP). Budgeted at R$56 million, it’s scheduled to begin operating in September. The unit was designed to generate 0.5 MW and is being built at the company’s experimental alternative-renewable energy complex located alongside the Porto Primavera hydroelectric plant on the Paraná River. CESP opted to use heliothermic parabolic-trough technology, the most widely adopted of the four extant solar thermal systems (see infographic).

The experimental power plant in São Paulo will consist of six rows of aluminum mirrors coated with a reflective film. Each of the 576 rectangular mirrors is 7 meters long by 64 centimeters wide, and each row is 150 meters long. “Aluminum has a longer useful life and is easier to assemble than glass mirrors,” explains Luis Paschoalotto, the manager of Operations and Maintenance Engineering at CESP. The material was imported from the United States.

One advantage of CSP plants is that heat storage allows them to continue to generate energy after the sun is no longer shining on the system, since the flow of heated fluid can be controlled such that the electric generator keeps operating. “It’s an important feature, which allows the plant to be ‘dispatchable,’” Paschoalotto emphasizes. Dispatchable, in electricity sector jargon, means that generation can continue even when the energy source—in this case sunlight—isn’t available at the time, such as at night. In a large solar thermal plant, power generation can be extended for up to 18 hours. Photovoltaic and wind energy are intermittent, so power generation ceases immediately when there is no light or wind.

The CESP project was conceived in response to a 2015 public request for proposals (RFP) by the National Electric Energy Agency (ANEEL), whose objective was to collect data capable of promoting a national strategy for developing solar thermal power generation. “In our project completion report, we intend to inform ANEEL that although the technology still has a higher unit cost than other sources, it has other important attributes, because it generates renewable and controllable energy. It needs to be incentivized,” Paschoalotto states.

Some specialists recommend that specific energy purchase auctions be held for CSP generation until the energy source achieves scale and becomes competitive. This was the mechanism adopted to encourage wind and photovoltaic energy during their early years in Brazil.

Solar thermal generation is still in its infancy throughout the world. The International Renewable Energy Agency (IRENA) estimated that installed solar power generation capacity totaled 713.9 gigawatts (GW) in 2020. Of this total, 707.5 GW are obtained with photovoltaic generation, while only 6.4 GW come from CSP systems.

Paulo Cunha, a researcher at the Energy Studies Center of the Getulio Vargas Foundation (FGV Energia), observes that the photovoltaic equipment industry has made significant progress over the last 10 years. During this period, there was a reduction in the average cost of generation from US$0.378 per kilowatt-hour (KWh) in 2010 to US$0.068 per KWh in 2019, according to IRENA data. Cunha believes this is why photovoltaic generation systems became popular. During the same period, the CSP generation equipment industry did not evolve, and several suppliers of solar panels and heat receivers closed down. The cost of solar thermal generation, according to IRENA, is US$0.182 per kWh, about 2.5 times higher than that of photovoltaic power (see infographic below).

The Electric Power Generation and Transmission Company of Southern Brazil (ELETROSUL), and Neoenergia, of the Spanish Iberdrola group, which operate in 18 Brazilian states, also submitted projects for the ANEEL request for proposals. When contacted for this report, they did not wish to comment. Another company that responded to the ANEEL RFP was Companhia Hidrelétrica do São Francisco (CHESF). José Bione de Melo Filho, manager of the company’s Research, Development, and Innovation Department, says that the company’s objective is to build two experimental plants in Petrolina, Pernambuco, the first using parabolic trough technology and the other employing a central tower, like the Chilean Cerro Dominador facility.

The parabolic trough plant will generate 0.8 MW of power, with installation work expected to start this year, as soon as the project obtains environmental licensing. Another pending issue is the acquisition of the concave mirrors needed to capture and reflect solar radiation to the focal point. “Brazil does not have the know-how to fabricate these mirrors. That’s the main bottleneck,” says Melo Filho. There is still no forecast regarding the construction of the central tower generation plant.

At the School of Animal Science and Food Engineering of the University of São Paulo (FZEA-USP), Pirassununga campus, an experimental CSP project is expected to start operating in 2022. Their plant design is distinguished by being a hybrid electricity generation system linked with heat cogeneration for industrial use.

Solar generation will be obtained with the use of 74 heliostats, each formed by 9 square mirrors of Brazilian glass. They are 9 m2 each and will be aimed at a focal point at the top of a 25-meter central tower. The CSP will have an installed power capacity of 70 KW. “When there’s a lack of sunshine, the turbine will be powered by biofuel, which is the reason the system is hybrid,” explains FZEA professor Celso Eduardo Lins de Oliveira, coordinator of the Research Group on Recycling, Energy Efficiency, and Numerical Simulation (GREEN-USP). 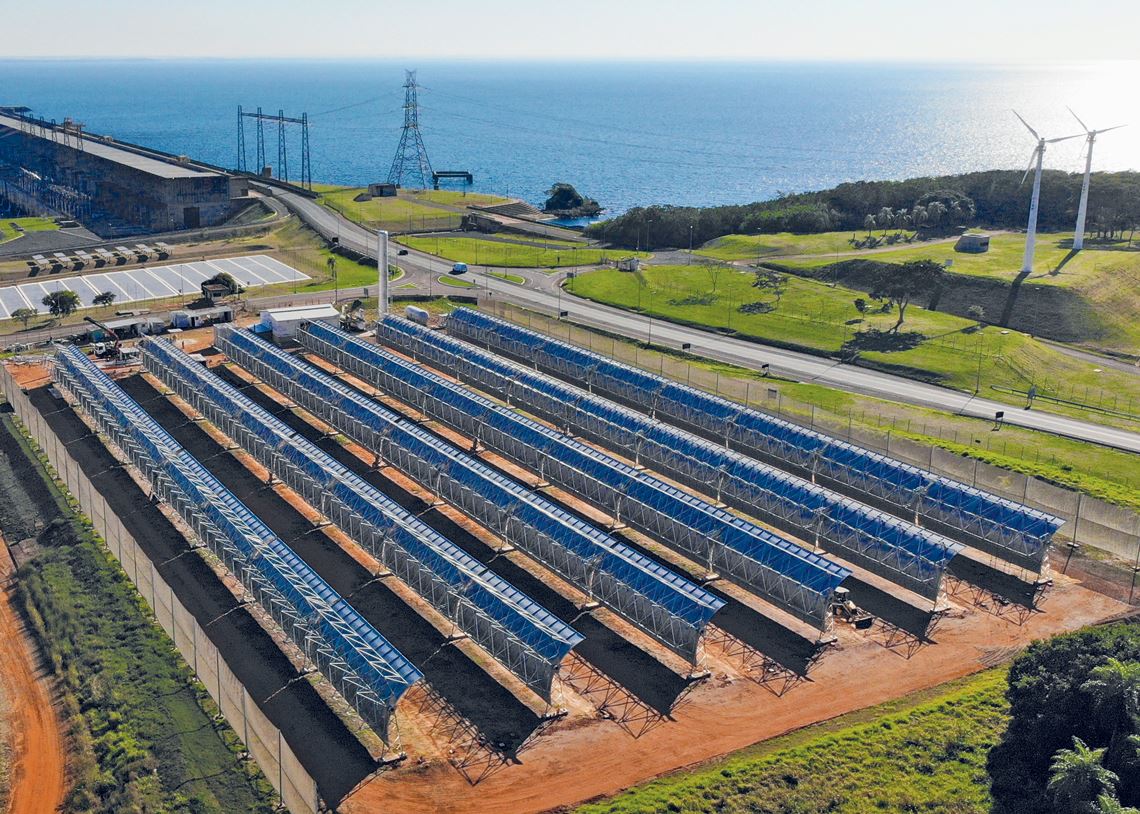 The CESP experimental solar thermal plant alongside the Porto Primavera hydroelectric plant on the Paraná River, on the border between São Paulo and Mato Grosso do SulCESP

Cogeneration is the application of heat energy waste from the electricity generation process for use in various industrial processes, such as drying, refrigeration, and pasteurization. In the USP project, the heat will be directed to the school’s teaching slaughterhouse, for sterilizing the slaughter area and other purposes. “Our proposal is to make small CSP plants viable for use in agribusiness, helping them to achieve energy independence”, says Oliveira.

The GREEN CSP project was created out of a partnership between the São Paulo company Solinova and the German Space Center (DLR). A spin-off of FZEA’s Energy Efficiency and Process Simulation Laboratory, Solinova is also developing an experimental cogeneration project at a dairy plant in Caiçara do Rio do Vento, in the state of Rio Grande do Norte, though it’s still in its initial phase. At the Caiçara project, Solinova is responsible for supplying the technologies for the power and cogeneration unit. Recently, the company obtained support from FAPESP’s Research for Innovation in Small Businesses (RISB) program to develop a new hybrid power unit for biofuels and CSP energy.

For USP Polytechnic School professor José Roberto Simões-Moreira, author of the book Energias renováveis, geração distribuída e eficiência energética [Renewable energy, distributed generation, and energy efficiency], the current shortage of rainfall affecting Brazil is further proof that the country needs to diversify its electrical grid and reduce dependence on hydropower, which accounts for about 60% of the electricity produced in the country. “Hybrid thermal generation with solar irradiation, supplemented when necessary with biomass or natural gas, is a good alternative, in addition to wind and photovoltaic solar energy,” says Simões-Moreira. “It provides reliability to the power grid and should be incentivized, since it’s economically competitive.”